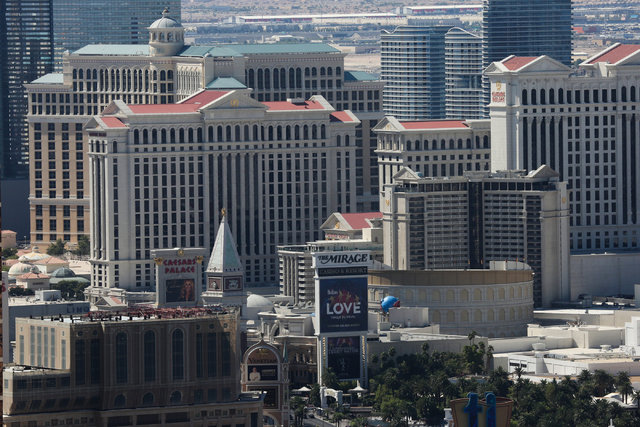 The 2017 Nevada Gaming Abstract, published Friday by the state Gaming Control Board, said net income from Strip licensees that annually gross more than $1 million in gaming revenue was up 191.4 percent over the previous year to $814 million in the 2017 fiscal year that ended June 30.

Strip properties showed a 3.9 percent increase in total revenue including rooms, food, beverage and gaming over 2016 to $17.8 billion for the year with gaming revenue alone up 3.1 percent to $6 billion.

The 233-page abstract is a statistical smorgasbord that lists net income, money spent by patrons on gaming, rooms, food, beverages and other attractions by county and by the board’s 13 geographic market areas statewide.

Statistics are compiled from July 1, 2016, to June 30, 2017, and compared with matching statistics from the previous 12 months.

The report, posted on the Control Board’s website, lists compiled balance sheets from the state’s casino companies, the average number of employees, the rate of room occupancy, revenue earned per room per day, gaming revenue earned per square foot and various ratios.

The report also breaks out statistical categories for Nevada’s publicly held corporations, the amount of taxes paid and the percentage of income that went to taxes.

Because of proprietary information from some privately held companies, statistics aren’t broken down by property or by company.

Among the eye-popping facts from this year’s report:

■ Casino resorts collected $26.2 billion in revenue statewide in the 2017 fiscal year. That includes rooms, food and beverage and all aspects of the casino.

■ High-flying downtown Las Vegas reported net income of $110.3 million for its major resorts, a 111.3 percent increase over 2016. Total revenue was up 10.3 percent to $1.22 billion, and gaming revenue climbed 11.6 percent to $613.2 million. Those revenue percentage increases were the highest in the state.

■ In Clark County, major casinos have $70.5 billion in long-term debt and liabilities on their books.

■ The room occupancy rate for Clark County resorts was 88.15 percent. The best month of the fiscal year: July, at 93.01 percent.

■ The average return on invested capital for all resorts was 6.9 percent.