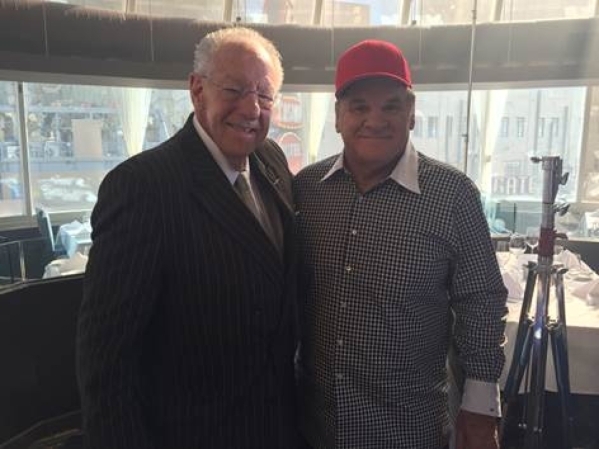 A television commercial for sports book operator William Hill US may not help banished baseball great Pete Rose in his efforts to get in the Hall of Fame.

But the ad, which airs following the Super Bowl on Sunday on Channel 8 and features Rose with former Las Vegas Mayor Oscar Goodman, will at least make light of the subject.

The commercial promotes William Hill’s mobile sports wagering application, which allows gamblers to place bets from a smart phone or tablet computer. It casts the three-term mayor into his former role as a “mob lawyer.” Goodman, surrounded by his ever-present showgirls, is seen negotiating a deal with another attorney.

Goodman then pulls out his smartphone and shows the easiness of placing wagers.

Rose, baseball’s all-time hit king who was banned from the sport for betting on baseball while he was a player and manager, says, “Are you sure this won’t get me into any trouble?”

William Hill US CEO Joe Asher said it didn’t take much to convince Rose to film the commercial.

“We thought he would be great in the spot,” Asher said.

Rose, who operates the Pete Rose Sports Bar & Grill on the Strip, said in a statement, “I’m looking forward to developing a long-term relationship with them.”

In December, Baseball commissioner Rob Manfred rejected Rose’s latest application for reinstatement. One of the reasons given was Rose’s admission that he still gambles today on horses and other sports, including baseball. Rose is still hoping to be enshrined in the Hall of Fame, although players on the league’s permanently ineligible list are ineligible.

Asher worked at the Brandywine Race Track in Delaware where he would see Rose during his career with the Philadelphia Phillies. Asher also become acquainted with Goodman during mayoral tenure.

The commercial was filmed at Oscar’s Steakhouse inside the Plaza where William Hill operates the race and sports book. William Hill has 105 locations in Nevada after launching in 2012.

“It’s as cool as it gets,” Goodman said. “A hall of fame performance.”

Asher said extra footage will be used in future commercials.