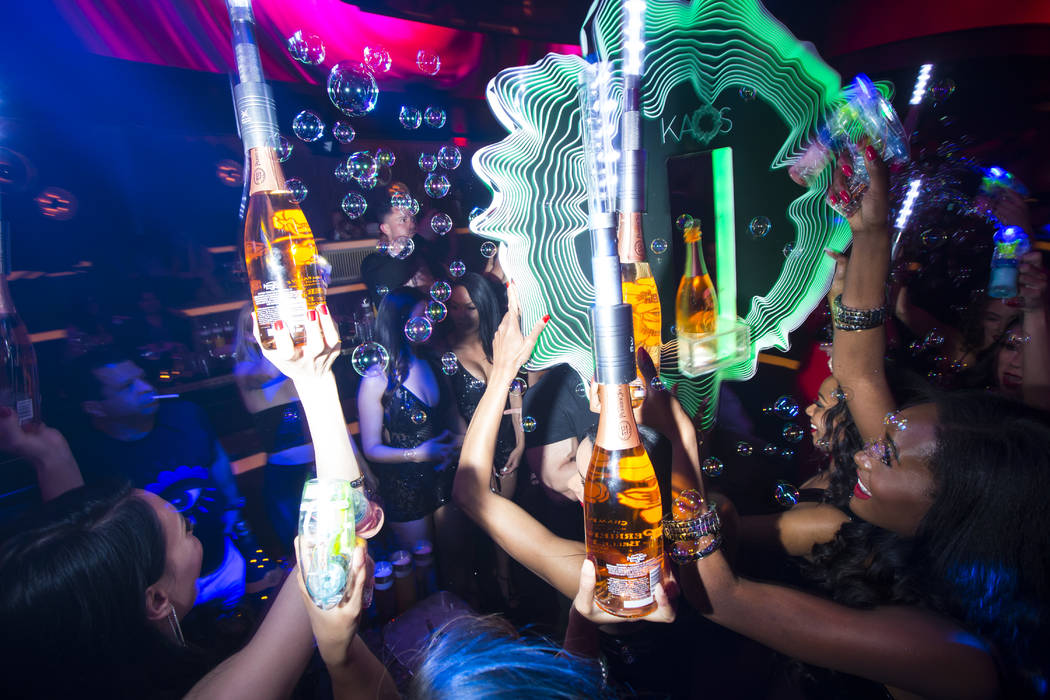 Bottles of champagne are delivered to a table in the nightclub area during the grand opening weekend of Kaos, the dayclub and nightclub at the Palms, in Las Vegas, April 5, 2019. (Chase Stevens/Las Vegas Review-Journal) @csstevensphoto 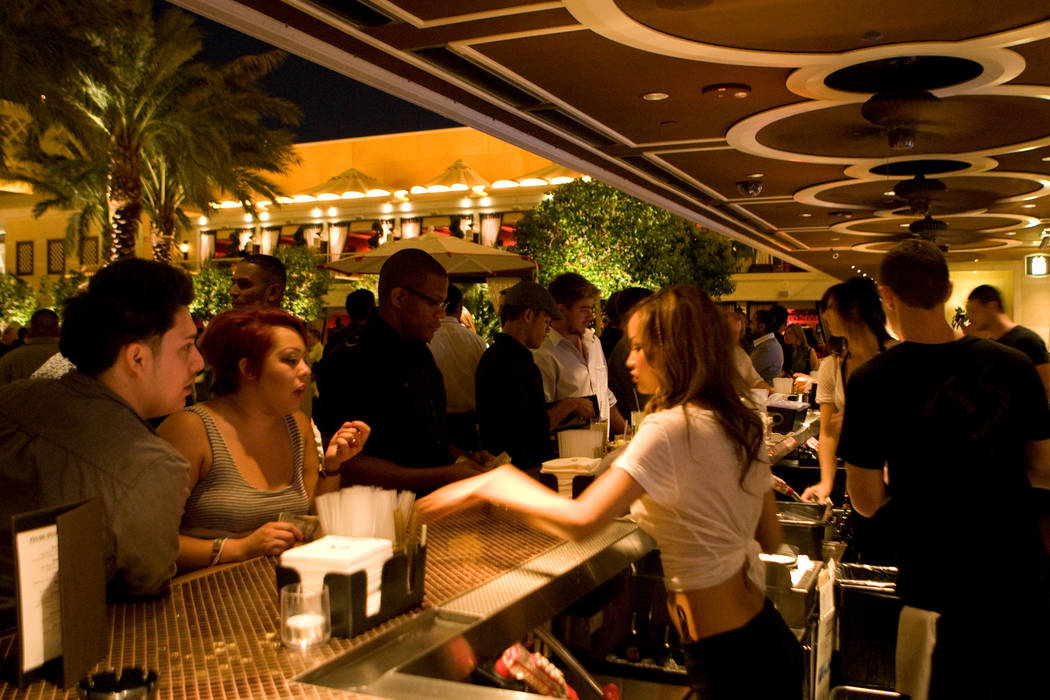 Amid rising resort fees and parking fees on the Strip, visitors have found another vexation: drink fees.

A number of dayclubs and nightclubs across the Strip have said they enforce service fees on drink orders.

Juan Carlos Diaz, chairman of the American Nightlife Association, said he had only recently heard about the fee itself and didn’t know of any other city with the fee outside of Las Vegas.

Diaz said the fee — sometimes referred to as a venue fee or service fee — is placed on table service or bar service, and is used to cover additional costs such as maintenance.

“I’m sure it’s something that’s good for business that can help cover costs, but they have to be more creative in the ways they take care of their customers,” he said.

The majority of the venues that told the Las Vegas Review-Journal they charged a service fee were dayclubs or nightclubs.

A front desk operator for Light Nightclub and Daylight Beachclub at Mandalay Bay — operated by PLAY Management — said in September the venues charge a 7 percent service fee on food and drink orders. A company representative declined to provide more comments when reached via email.

MGM Resorts International had a service charge at certain company-owned bars and lounges, but stopped in early September. Dayclubs, nightclubs and ultra-lounges at MGM properties are still potentially subject to service fees. MGM representatives declined to comment on what the service charge at the company-owned properties was used for, how much it charged and which venues enforced the charge while it was in place.

The Venetian spokeswoman Alyssa Anderson said the property’s restaurants and lounges do not charge an additional mandatory fee for drinks. A Red Rock Resorts representative said Station Casinos properties don’t charge a fee on drinks other than the taxes required by local and state governments, but the Palms nightclub and dayclub Kaos charges a venue fee on table reservations.

The Sahara Las Vegas said in a statement that live entertainment venues are now enforcing an automatic 15 percent gratuity that goes directly to staff. The gratuity applies solely to drinks delivered to tables by staff, and every customer receipt is marked with a notice of the fee.

Representatives for Hakkasan declined to comment. Drai’s and Tao Group did not respond to requests for comment.

Ted Newkirk, founder of gaming and tourism tips website Access Vegas, said that for the most part, the fee doesn’t appear to be a property-mandated charge, and instead falls under third-party operators at certain venues.

Even with these additional fees, many still consider Las Vegas an affordable destination because of the amenities it offers, according to Alan Feldman, a distinguished fellow for the UNLV International Gaming Institute.

“You have incredibly dynamic spaces with nightlife, day life, gorgeous spas,” he said. “Some of the hotels are appearing on world-wide lists of the best in the world.

“What the Las Vegas hotels deliver in terms of experience is significantly more,” he said. “I think you’re talking about a different product.”

Newkirk said these fees have been around three years or so, but are just beginning to gain the attention of Las Vegas locals and visitors.

“This has so far been under the radar,” he said. “How far these are going to spread, nobody knows.”

In August, Caesars CEO Tony Rodio warned that exorbitant fees could one day backfire on casino operators. The company has since raised resort fees at three of its properties.

“Over time, at some point there’s going to be the straw that breaks the camel’s back,” Rodio said during a call to investors. “I don’t think we’re there yet, but I want us to be very judicious and cautious about taking those rates any further. It’s certainly a revenue stream that’s hard to walk away from and it’s been accepted at this point, but we’re getting pretty high.”

Newkirk agreed, and said customers are starting to take notice of operators’ “nickel and diming.”

“We’re getting to the point where you can’t keep boosting (fees) and expect nobody to care,” he said. “The social (media) feedback has been awful. … It is getting to be one of the straws that is beginning to break the camel’s back on return visitors.”