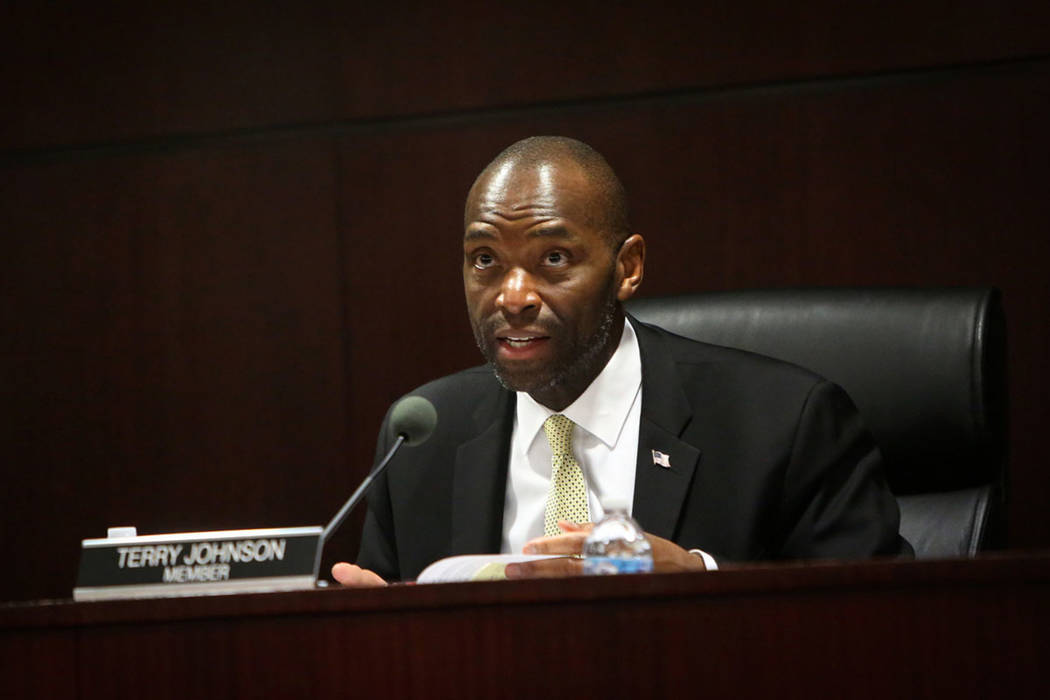 Member Terry Johnson of the state Gaming Control Board speaks during a board meeting at the Grant Sawyer Building in Las Vegas, March 13, 2019. (Caroline Brehman/Las Vegas Review-Journal) @carolinebrehman

One of the world’s largest sports wagering companies moved a step closer to being licensed in Nevada on Wednesday.

But not before nearly four hours of testimony, a public dressing down of a company executive and a key vote from the state Gaming Control Board’s newest member.

Isle of Man-based GVC Holdings Plc., the largest online gaming operator in Great Britain and Germany, was recommended for licensing by the state Gaming Control Board following a 2-1 vote.

Board member Terry Johnson cast the lone vote against an approval recommendation after he chastised CEO Kenneth Alexander for failing to properly supervise online gaming transactions in Turkey.

“I’m at a loss to understand where exactly did the buck stop in the company if it didn’t stop with you, and why are we to be assured that going forward you’re going to be at the helm of this company in a different manner than what transpired over the past several years?” Johnson asked.

The board recommended approval of a provisional license for GVC through which the company must return to regulators in two years to re-assess operations to stay licensed. The company must also provide the board with $100,000 to spend on future investigations into company compliance.

Board member Phil Katsaros, in his first meeting since being appointed to the board by Gov. Steve Sisolak last month, voted with Chairwoman Sandra Morgan in favor of the recommendation.

If licensing is approved by the Nevada Gaming Commission when it meets May 23, GVC would join a “British invasion” of sports wagering companies into the United States, including William Hill, Paddy Power Betfair and bet365.

MGM operates its sports books with a system developed by London-based IGT. The company indicated it eventually would transition to GVC’s system, but didn’t indicate a timetable for a switch.

A spokesman for MGM said it would continue its relationship with IGT.

Licensed in New Jersey, GVC partnered with MGM at its Borgata property in Atlantic City in poker and online gambling but recognized an expansion opportunity in the United States a year ago when the U.S. Supreme Court struck down the Professional and Amateur Sports Protection Act enabling nationwide sports wagering.

Since 2016, GVC has grown exponentially with its $1.43 billion acquisition of Bwin.party Digital Entertainment. The company, which generated $4.7 billion in revenue with $982 million in cash flow in 2018 and has 25,000 employees worldwide, is a Financial Times and London Stock Exchange 250 company.

In addition to licensing the registration of GVC as a publicly traded corporation, board members reviewed the suitability of officers, directors and shareholders.

When GVC acquired Ladbrokes Coral Group Plc. in March 2018, it inherited a Ladbrokes operation in Turkey. GVC disposed of the Turkish operation in November to smooth the regulatory approval process of the Ladbrokes transaction.

But board members expressed concern that top officers were unaware of payment processing procedures between the operation and gamblers and tried to conceal the operation from regulators.

“People were actually stealing from you,” Johnson told Alexander. “They were defrauding you and because you were engaged in questionable activity, you were without much recourse to go after them because of what you yourself were doing as a company. … I’m actually surprised at the glossing over what has transpired with these payment transactions, particularly as it related to the essence of regulated gaming here in Nevada.

Johnson also said he was surprised that “no one has stepped up and said, ‘I was in charge. I was responsible. I bear ultimate responsibility for this. These people worked for me. I hired them, I supervised them, I kept them, and they didn’t bring this to me. It’s their fault for not doing so, but it’s also my fault for ineffective supervision.’”

An investigation by outside counsel indicated that company training manuals explicitly stated that when a customer made a deposit with a credit card in the Turkish, Brazilian or Mexican markets that the company brand would not appear on the credit card statement, which Johnson cited as “active concealment.”

Alexander said the company is no longer in the market and literally gave its Turkish unit away instead of selling it to prevent further regulatory trouble.