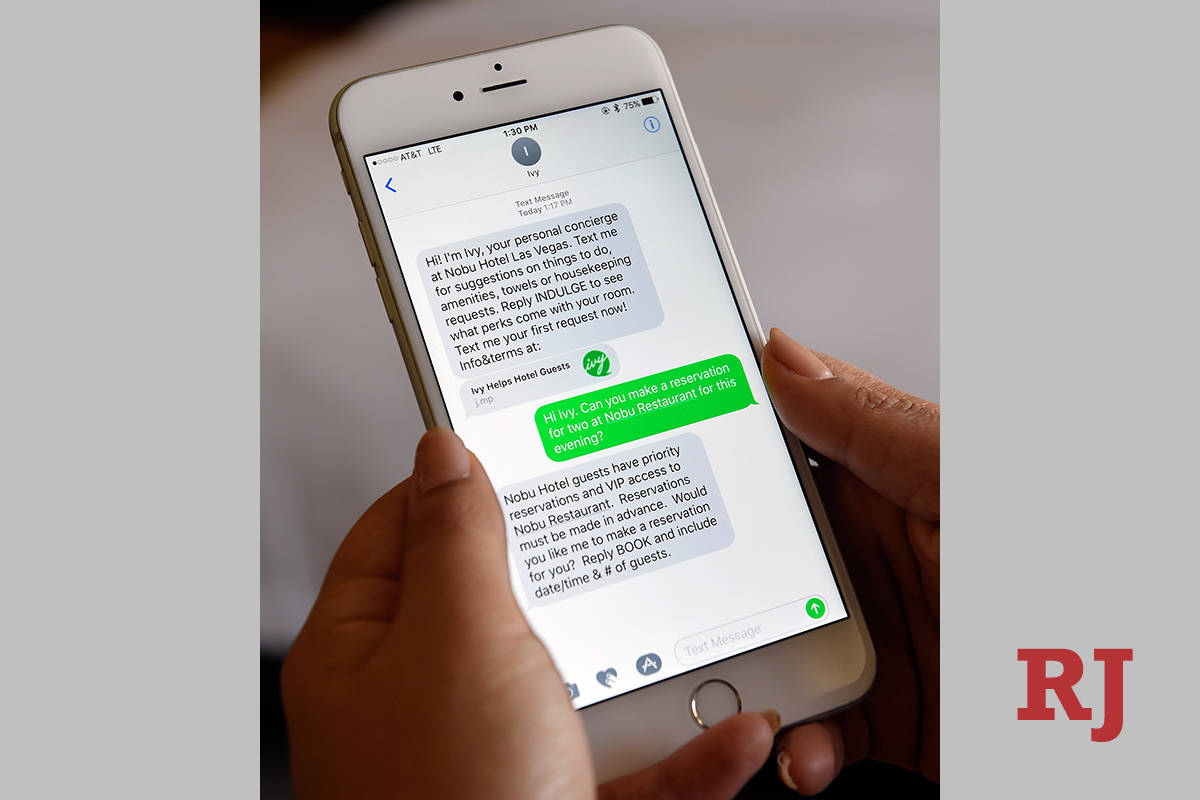 The gaming of tomorrow may be here today.

Artificial intelligence already exists in Las Vegas’ hotel-casinos, and its use across resort operations is likely to expand in coming years. Guests will notice how AI technology can enhance their hotel stays and experiences on the casino floor.

But what they see is only half of the story.

That’s according to Jeremy Kaplan, editor-in-chief of technology news site Digital Trends, who closely follows the latest AI tech trends and is scheduled to speak on a CES 2021 panel Tuesday titled “The Power of AI.”

“The hospitality industry has been very aggressive about adopting new technologies and finding out ways to make your experience staying at a hotel better, and a lot of it is really good stuff,” Kaplan said.

Guests at Caesars Entertainment Inc. properties may recognize AI technology by the name of “Ivy.”

The virtual concierge service answers guest questions and helps them with many of the things they typically would’ve asked from the front desk, a Caesars spokeswoman said. Guests can text Ivy, powered by Go Moment, for food or entertainment recommendations, dinner reservations, housekeeping requests, or ask common questions like Wi-Fi passwords and pool hours.

Ivy launched 2016 in Las Vegas and is available at all local Caesars properties except Rio, the spokeswoman said. The property’s response team can provide an immediate response for more complicated requests.

It’s an optional program guests can decide at check-in, and they can opt-out by texting “STOP.” The virtual concierge program is a “home run” with guests and also cuts down on call volume and lines at the front desk, the spokeswoman said.

“Guests think Ivy is a real person and regularly visit the desk asking to meet her to thank her for the excellent service ‘she’ provided during their stay,” the spokeswoman said.

A Japanese company has taken the technology a step further.

Kotozna has launched its own virtual concierge service, In-room, that employs automatic language translation technology to ease communications between international travelers and hotel staff. Guests and staff can use their phones and type in their preferred language, and In-room will translate the conversation for the other user. Guests scan a QR code in their room to use the service, which can translate more than 100 languages and eliminates the need for hotel room phones, according to Kotozna CEO Genri Goto.

Goto presented his product at a Thursday webinar hosted by description of tech event organizer ShowStoppers and the Japan External Trade Organization. He said 50 hotels have signed up for the product in Japan. Kotozna expects to enter the U.S. in 2022, a spokeswoman later said.

Other companies like Konami and Scientific Games have developed AI technology for slot machines. It incorporates facial recognition capabilities to identify who is playing their games, and tailor more personal services based on a user’s visitation, spending and dining habits, a Konami executive told the Review-Journal ahead of the 2019 Global Gaming Expo.

The staff would “know exactly where you are, say hello, and could offer you something to eat at the steakhouse,” said Greg Colella in 2019, then the vice president of product management for Konami. “Those hosts are the key to a lot of that (old Vegas vibe). They knew people on sight. … This is allowing the modern casino to be able to provide better service at a much larger level.”

AI in a slot machine could use facial recognition to automatically log in a user and then pattern recognition to suggest another machine to play, based on the user’s gambling habits.

What you don’t see

The eyes in the sky are watching, and closer than ever.

At least one major gaming operator on the Strip was using facial recognition as far back as 2018, according to Alec Massey, a director in PwC’s Connected Solutions practice, speaking at the 2018 G2E event. Though he wouldn’t say which property used the technology, Massey indicated facial recognition helped security potentially identify people based on an existing database of photographs.

AI technology with facial and pattern recognition could make it easier for casinos to identify potential problem gamblers or “the bad eggs they’re constantly watching out for,” adds Kaplan, the editor-in-chief of Digital Trends.

Crowd-tracking technology can also help a casino optimize its floor layout based on traffic flows and which products are used more than others, he added.

A former MGM Resorts International representative said in November that casinos track who is on their floors as a matter of industry practice. Industry operators use security cameras, hand counts, and in some cases nationally, artificial intelligence, said Rick Arpin, now a managing partner of audit, tax and advisory services firm KPMG.

He said he wasn’t sure how prevalent the technology was used in local resorts, though he cited two crowd-tracking analytic companies, SenSource and CrowdVision, which have large-scale clients like airports and museums. CrowdVision’s website notes resorts and convention centers among its clients, and SenSource’s website includes MGM Resorts International among multiple casino clients.

Kaplan wasn’t shocked that casino companies were hesitant to talk about potential behind-the-scenes AI tracking; it’s not the type of thing some would want to hear.

“I would be surprised if they weren’t already doing that and just not telling you about it,” Kaplan said.

Kaplan said that initial fears of new technology and privacy invasion can be justified if personal data collection is abused, though anxiety can often prove misguided as time elapses and people grow more comfortable.

“That said,” Kaplan adds, “I would be really freaked out if I walked in the door of a casino and a robot drove over and said, ‘Hey, it’s good to see you again,’ and I imagine that most people would be very freaked out if they heard X casino was doing this.”

The “cutting edge” of AI technology isn’t reactive like Alexa, Siri or another voice-activated assistant, but proactive, Kaplan said. For example, he said, AI security programs might ping someone who just left their house and suggest they set their home security system.

Perhaps people staying in a bridal suite could walk in the door, and an AI voice asks if they’d like caviar or champagne. Someone asks a virtual concierge program for a towel, and the service fulfills the request and throws in an extra bottle of shampoo.

The future is closer than you might think, he said.

“It’s not very weird to think that at some point AI’s gonna be baked into everything,” Kaplan said.