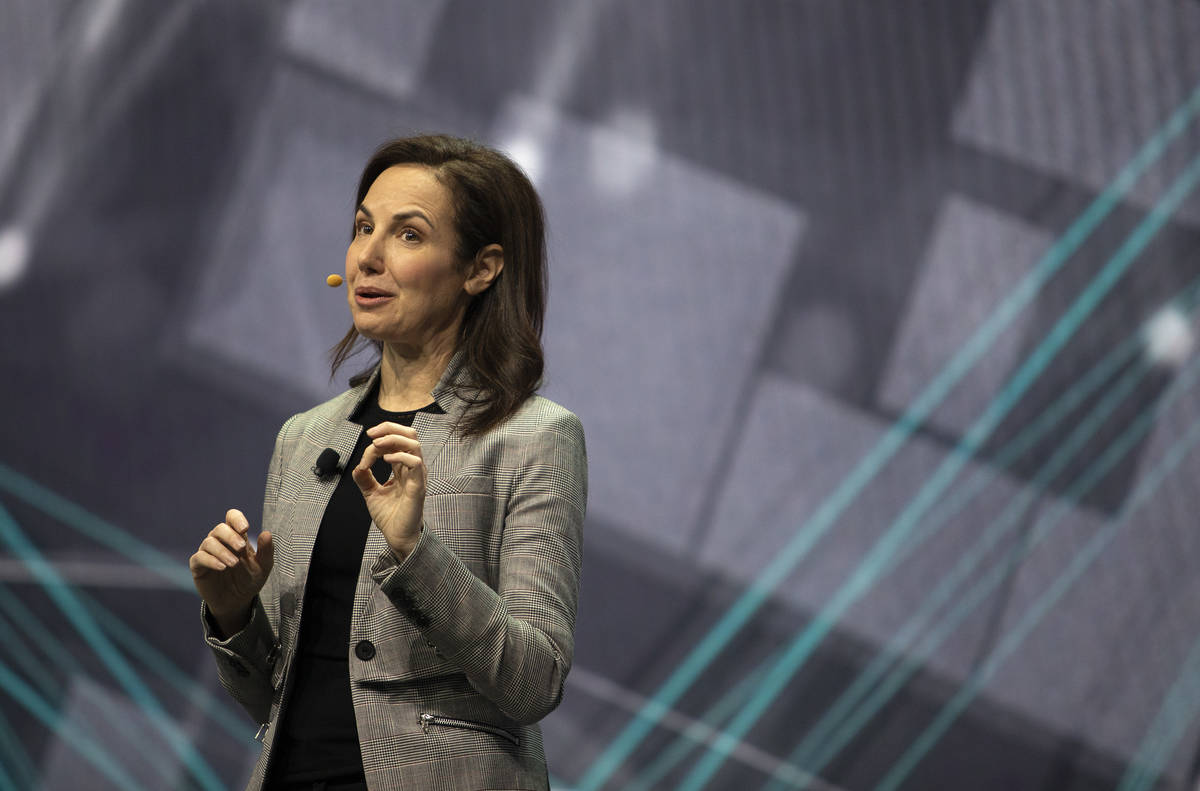 Emily Becher, senior vice president at Samsung Electronics, speaks during the Samsung Keynote event at CES 2020 at The Venetian on Monday, Jan. 6, 2020, before start of the CES trade show, which runs Tuesday through Friday, in Las Vegas. (Ellen Schmidt/Las Vegas Review-Journal) @ellenkschmidt_ 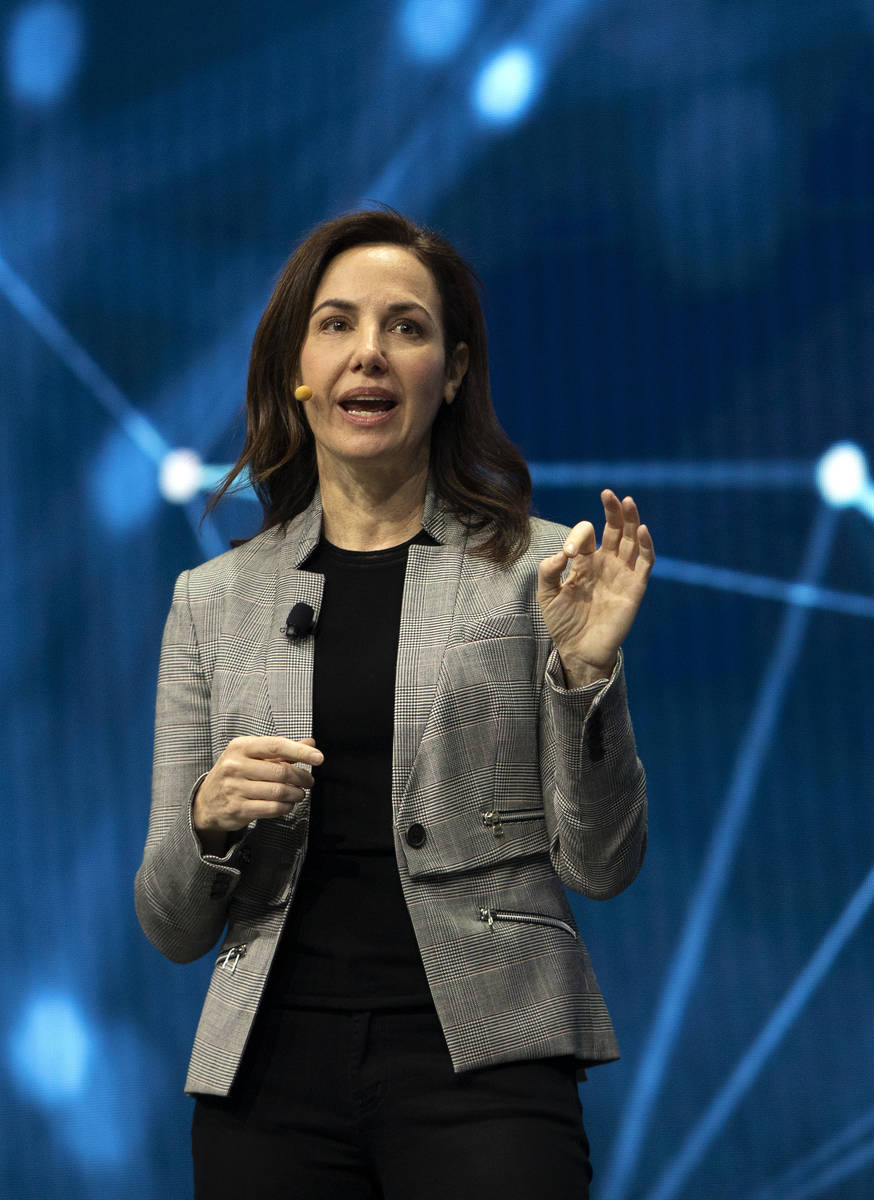 Emily Becher, senior vice president at Samsung Electronics, speaks during the Samsung Keynote event at CES 2020 at The Venetian on Monday, Jan. 6, 2020, before start of the CES trade show, which runs Tuesday through Friday, in Las Vegas. (Ellen Schmidt/Las Vegas Review-Journal) @ellenkschmidt_

This year’s CES will look different than its predecessors, and not just because it’s going virtual — it’s also more diverse.

Women are in six of nine keynote addresses listed on CES’s website, but it wasn’t always that way. Just three years ago, all of the top keynote speakers were men.

Experts say the diversification efforts are an important move by the convention’s organizer, the Consumer Technology Association, and could have ripple effects across the tech industry.

We ‘must do better’

In 2018, it was the second consecutive year the consumer electronics trade show ran without any women in top keynote slots.

After receiving backlash for a lack of diversity among speakers, CES’s organizer — the Consumer Technology Association — blamed a “limited pool” of high-level women in the tech industry.

“To keynote at CES, the speaker must head a large entity who has name recognition in the industry,” said CES executive vice president Karen Chupka in a December 2017 blog post. “We feel your pain. It bothers us, too. The tech industry and every industry must do better.”

Jean Foster, CTA’s senior vice president of marketing and communications, said poor timing also played a part in a lack of women speakers over the years; if a major tech company with a woman at the helm didn’t have any major announcements to make, they were less likely to accept a keynote invitation, narrowing CTA’s pool of resources.

But “we always look for a diverse lineup of speakers,” Foster said. “Some years, it’s a challenge … so we’re focusing on trying to be as intentional as possible. …We want to get as much diversity as possible.”

Foster said this year’s virtual format may have helped diversify the convention’s keynotes.

“The challenge of (CES this year is) not being able to do this live and not get to Las Vegas, as we love to do, but it also makes it more accessible,” she said. “People who maybe aren’t able to get to Las Vegas can now participate.”

The significance of diverse speakers

Diversity issues are found across industries. A report from event software company Bizzabo found that just 36 percent of all event speakers in the U.S. were female in 2019. Conferences and conventions were among the least diverse events, with only 34 percent female speakers.

Gill said the lack of diversity among professional events shows that many organizations’ networks need improving; it’s up to them to make new connections and change the way they search for and vet speakers, she said.

Foster said the shortage of women speakers at CES in past years isn’t for lack of trying.

“We put out a call for speakers, and we often get many more men than women,” she said.

But CTA continues to push for more diversity — not only in gender — among its speakers and panels, citing the benefits diversity has on business.

A 2020 report from the nonprofit Catalyst found companies with inclusive business culture and policies are more likely to report a 59 percent increase in creativity, innovation and openness and 38 percent better assessment of consumer interest and demand. Research shows that translates into higher profits: A 2017 report from Boston Consulting Group found companies with above-average diversity on their management teams reported innovation revenue that was 10 percentage points higher than those with below-average leadership diversity.

“People are starting to realize that having a diversity statement isn’t enough,” Gill said. “Diversity is important not just as a PR stunt, but when you take these actions, your pipelines will become more diverse, the people in the room have different life experiences. You catch things you hadn’t caught before, you make better decisions.”

Foster said CTA recognizes that diversity is good for business, and the association “lives and breathes” that mindset by having a large share of women on its executive team.

She added that the CTA is trying to drive diversity in the industry from the ground up by funding organizations that promote unrepresented groups in the technology industry and by helping members set up programs that drive diversity within their own companies.

“CES is a powerful thing, so we want to make sure … we’re showcasing and using the power of our platform (to expand diversity in the tech industry),” Foster said.

Brenda Darden Wilkerson, president and CEO of AnitaB.org, a nonprofit organization focused on the recruitment, retainment and advancement of women in technology, said CES has the power and influence to make “real change happen,” and believes it’s important that events like it “take the lead.”

“It is not hard to have a diversified roster of keynote speakers that truly represents the entire population of technology sector, as there are so many amazing women to choose from,” she said.

Gill agreed that diversity at CES could have ripple effects on the tech industry at large.

“It’s one thing to put out a diversity statement, but it looks like there is some real action (from CTA) to fill those commitments, and that’s really important,” she said. “Those people are the public face of not just your organization, but of the industry.”