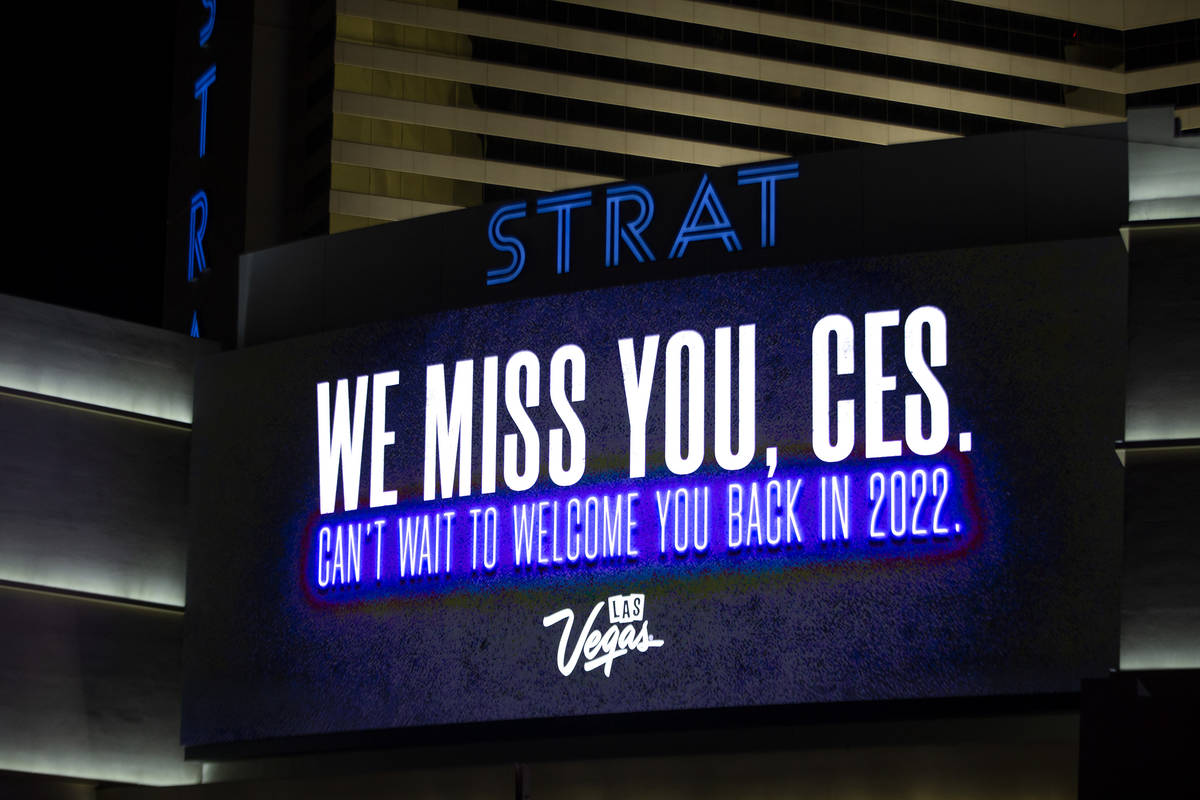 The marquee at The STRAT memorialize CES, which would have started on Monday but is moved online due to the COVID-19 pandemic, on Sunday, Jan. 10, 2021, on the Las Vegas Strip. (Ellen Schmidt/Las Vegas Review-Journal) @ellenschmidttt 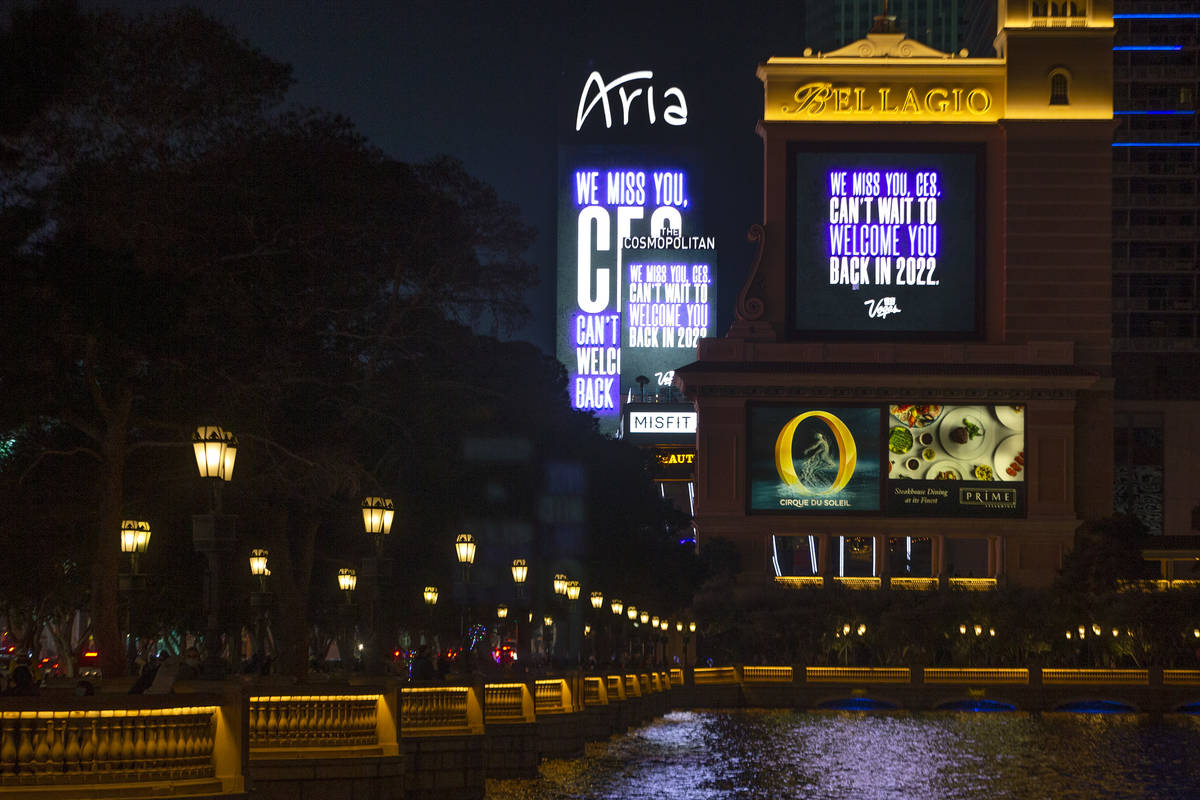 Marquees at Bellagio, Cosmopolitan and Aria memorialize CES, which would have started on Monday but is moved online due to the COVID-19 pandemic, on Sunday, Jan. 10, 2021, on the Las Vegas Strip. (Ellen Schmidt/Las Vegas Review-Journal) @ellenschmidttt 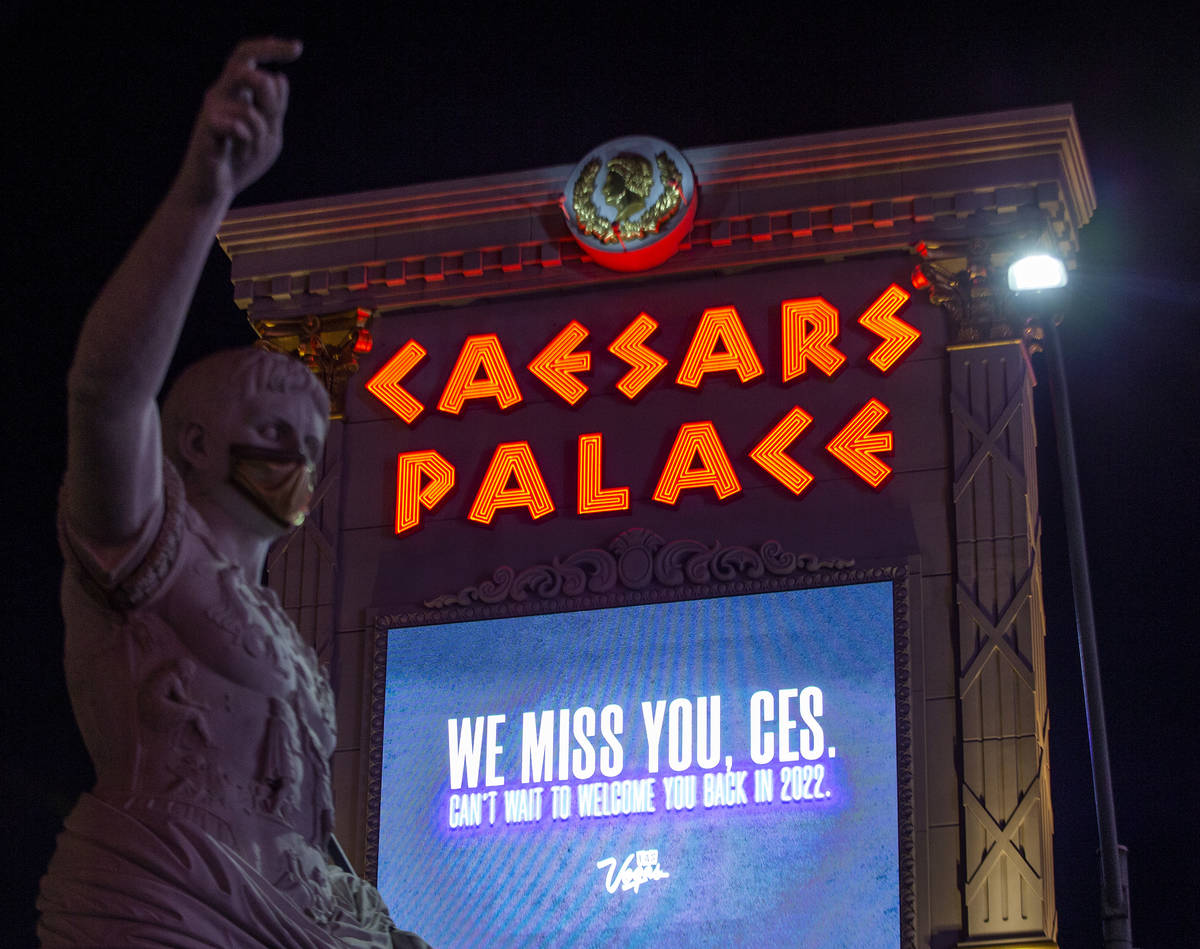 The marquee at Caesars Palace memorializes CES, which would have started on Monday but is moved online due to the COVID-19 pandemic, on Sunday, Jan. 10, 2021, on the Las Vegas Strip. (Ellen Schmidt/Las Vegas Review-Journal) @ellenschmidttt 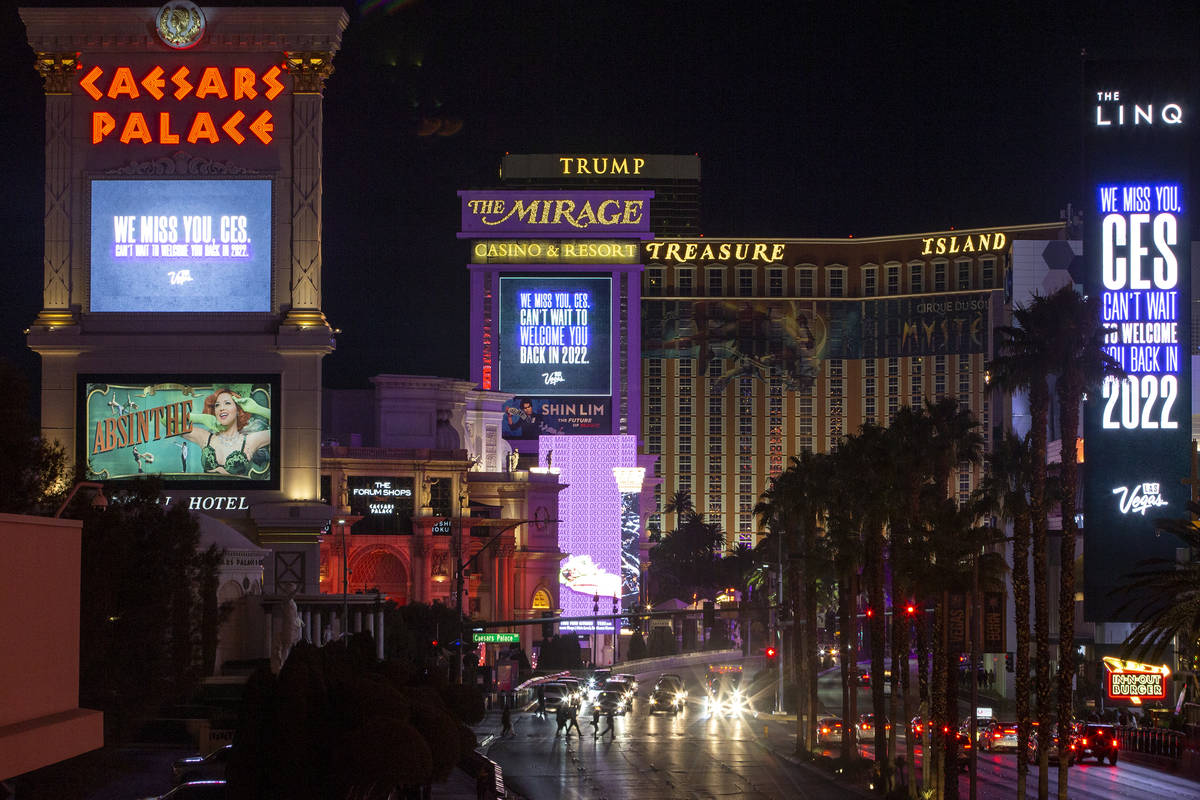 Marquees at Caesars Palace, The Mirage and The LINQ memorialize CES, which would have started on Monday but is moved online due to the COVID-19 pandemic, on Sunday, Jan. 10, 2021, on the Las Vegas Strip. (Ellen Schmidt/Las Vegas Review-Journal) @ellenschmidttt 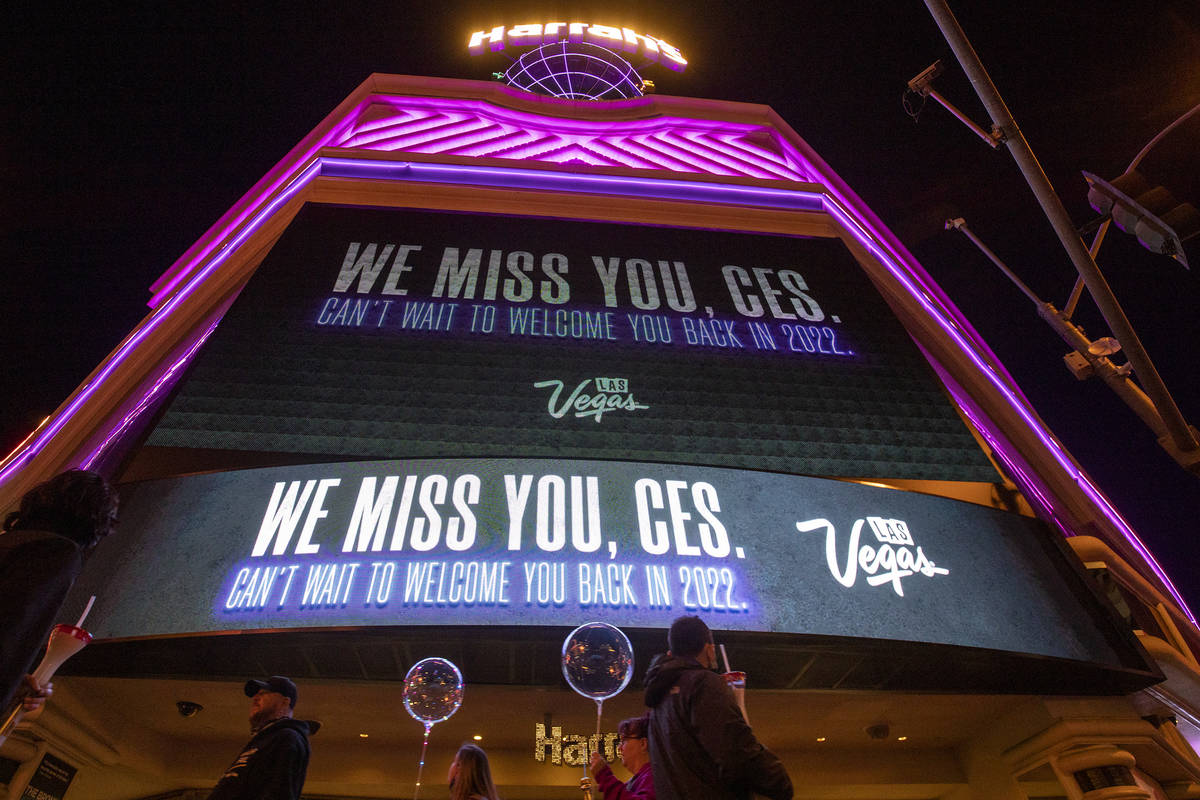 The marquee at Harrah's memorializes CES, which would have started on Monday but is moved online due to the COVID-19 pandemic, on Sunday, Jan. 10, 2021, on the Las Vegas Strip. (Ellen Schmidt/Las Vegas Review-Journal) @ellenschmidttt 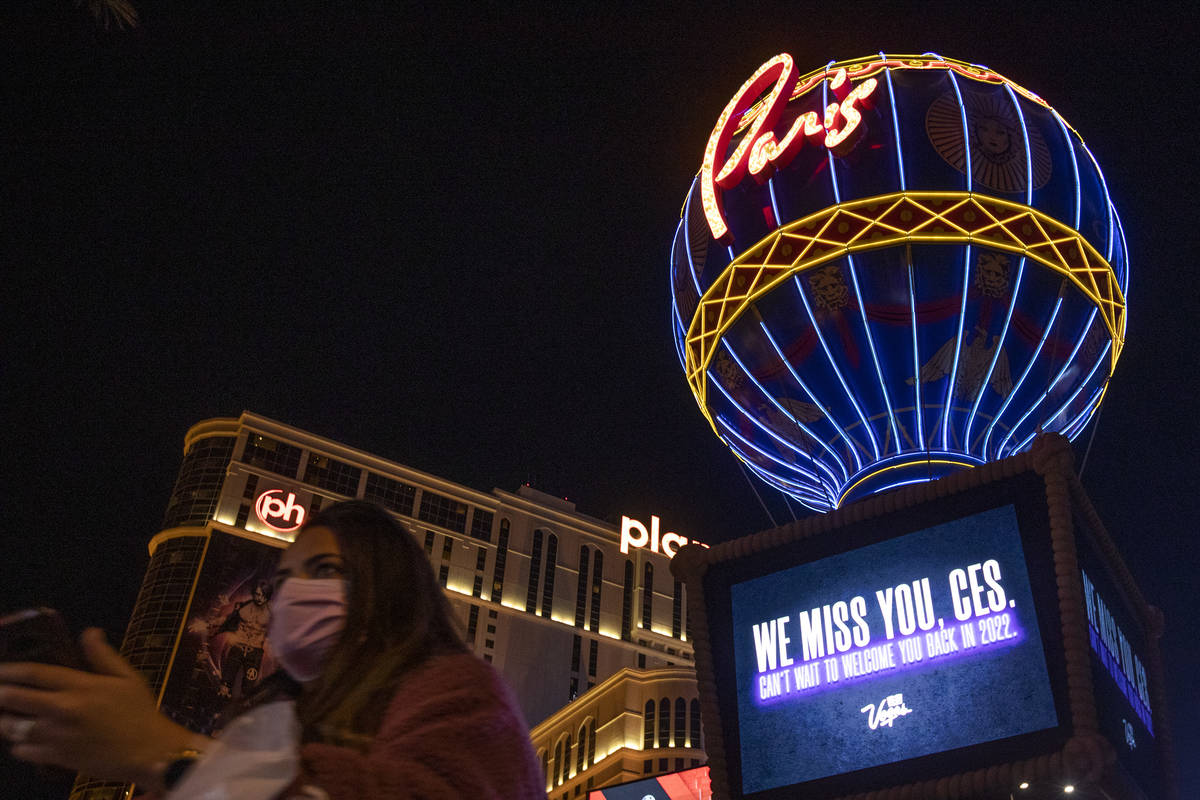 A masked pedestrian walks past a marquee at Paris that memorializes CES, which would have started on Monday but is moved online due to the COVID-19 pandemic, on Sunday, Jan. 10, 2021, on the Las Vegas Strip. (Ellen Schmidt/Las Vegas Review-Journal) @ellenschmidttt

This time of year, Las Vegas is usually bustling with hundreds of thousands of people flying in for CES.

But not this year — and Southern Nevada is set to miss out on hundreds of millions of dollars because of it.

Last year’s CES convention brought in roughly 180,000 attendees and had an estimated total economic impact of $291.4 million, according to the Las Vegas Convention and Visitors Authority.

All of that spending has been lost this year, and “just when we need it the most,” said Alan Feldman, a distinguished fellow at UNLV’s International Gaming Institute.

“I can think of no other convention of the size and scope and impact of CES,” he added.

With COVID-19 still spreading rampantly across the globe, the consumer technology trade show will be available in a virtual-only format between Monday and Thursday.

Before the coronavirus upended Las Vegas’ convention industry, the city had spent years planning to launch a brand-new exhibition hall at the Las Vegas Convention Center with CES.

CES 2021 was going to be the first show to test out the $980.3 million, 1.4 million-square-foot West Hall expansion. The visitors authority had worked with the Consumer Technology Association — which produces, manages and owns CES — and four other major trade shows to shape the new hall as an incentive to keep their respective shows returning to Las Vegas.

The show was also to be the debut of Elon Musk’s $52.5 million Boring Co. underground people-mover project.

LVCVA President and CEO Steve Hill said the decision to cancel the in-person convention is a “devastating situation,” but he looks forward to welcoming back the trade show in 2022. The CTA has said it plans to bring CES back to Las Vegas next year.

Until then, the city is missing out on vast amounts of economic spending and marketing.

“(CES) puts Las Vegas on the global stage,” said Applied Analysis principal analyst Jeremy Aguero. “It is among the most recognized, attended and watched (conventions) in the world, and it has become synonymous with Vegas, and there is huge value there.”

The loss of CES 2021 will have ripple effects across Las Vegas’ tourism industry, hitting everything from local restaurants to resorts.

The sharp drop in demand and visitation during this year’s CES is evident in the city’s room rates.

In 2019, some Las Vegas hotels were charging more than $1,000 per night for a room during the week of CES 2020. This year, a number of resorts across the Strip have shuttered rooms midweek to conserve costs. Those that do have rooms available midweek have cut prices up to 95 percent, compared to rates charged during CES last year.

Feldman said that he isn’t aware of any events, aside from the Super Bowl, that fill as many rooms in Las Vegas as CES.

“I don’t know of any other event that has the nongaming spend and (economic) impact that CES has,” he said.

Convention visitor spend in Las Vegas tends to eclipse that of the average tourist. An April report from the LVCVA found convention-goers — many of whom have expense accounts — spent $994 per trip in 2019, nearly 20 percent more than what the average leisure visitor spent.

“This is exactly what we would need in order to give the economy a boost,” Feldman said.

It’s still unclear exactly when the Las Vegas convention industry will be able to fully bounce back. Experts tend to agree that the recovery timeline will be one of the slowest in the state and will largely rely on widespread use of a vaccine.

“There was a hope that by now we’d be somewhat on the mend, but it doesn’t appear as though that’s likely,” Feldman said.

There are concerns that the pandemic has changed the convention industry permanently; with employees now used to virtual meetings, some businesses may view in-person trade shows in Las Vegas as a waste of money. Nevertheless, Aguero said he’s confident Las Vegas’ convention industry will someday rebound to pre-pandemic levels.

John Restrepo, founder of RCG Economics, wasn’t so sure.

“Not in my lifetime,” he said. “That industry … is going to be changed, if not permanently, changed for a long period of time, particularly as business travelers get younger. They’re more used to technology, they don’t need the face-to-face interaction.”

The virus will ultimately dictate the return of large events, though the resort industry is planning to host them as soon as it’s safe to do so.

“(Convention) business is crucial to Las Vegas’ recovery and keeping people working as well as bringing back thousands of jobs that rely on these major events,” Nevada Resort Association President Virginia Valentine said.