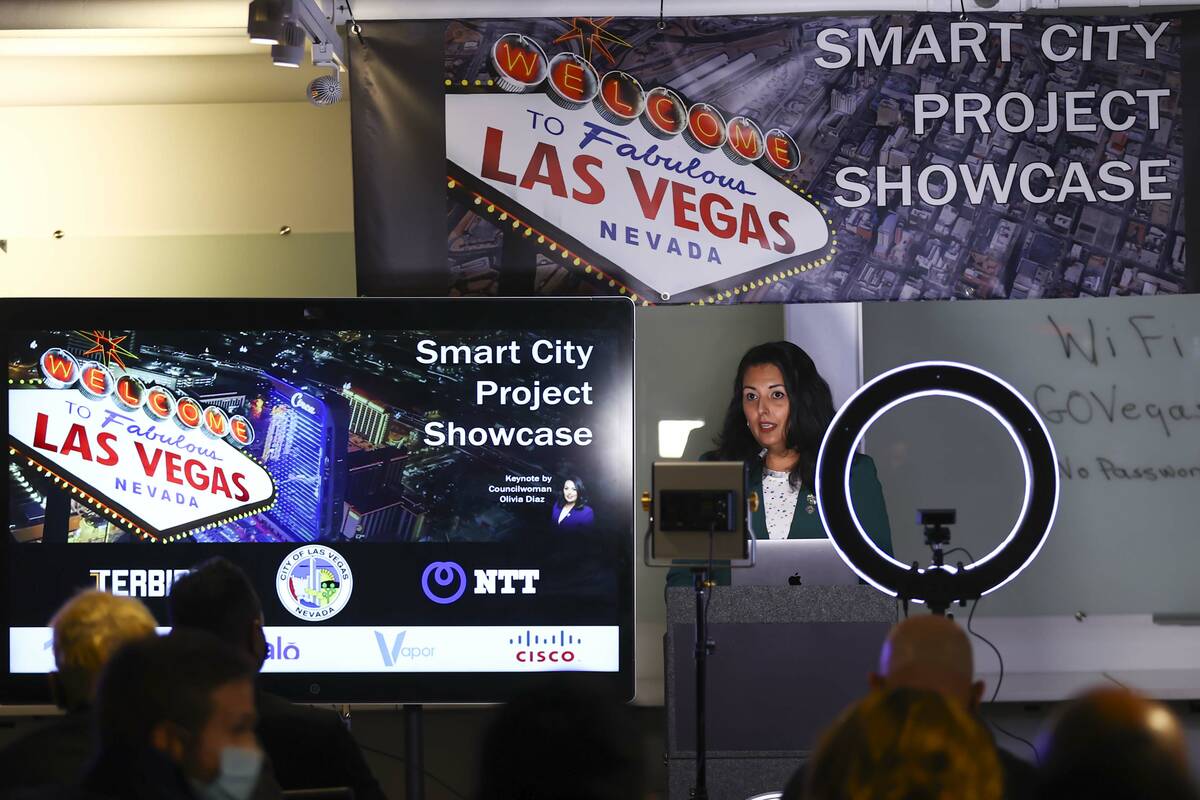 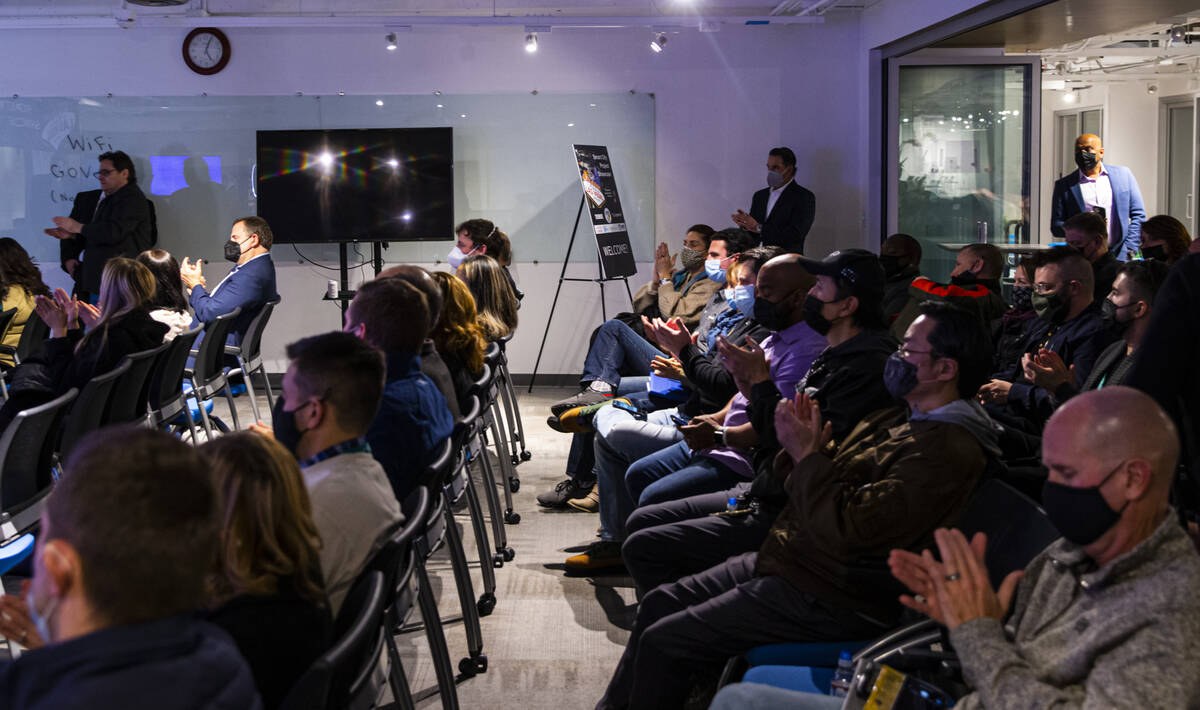 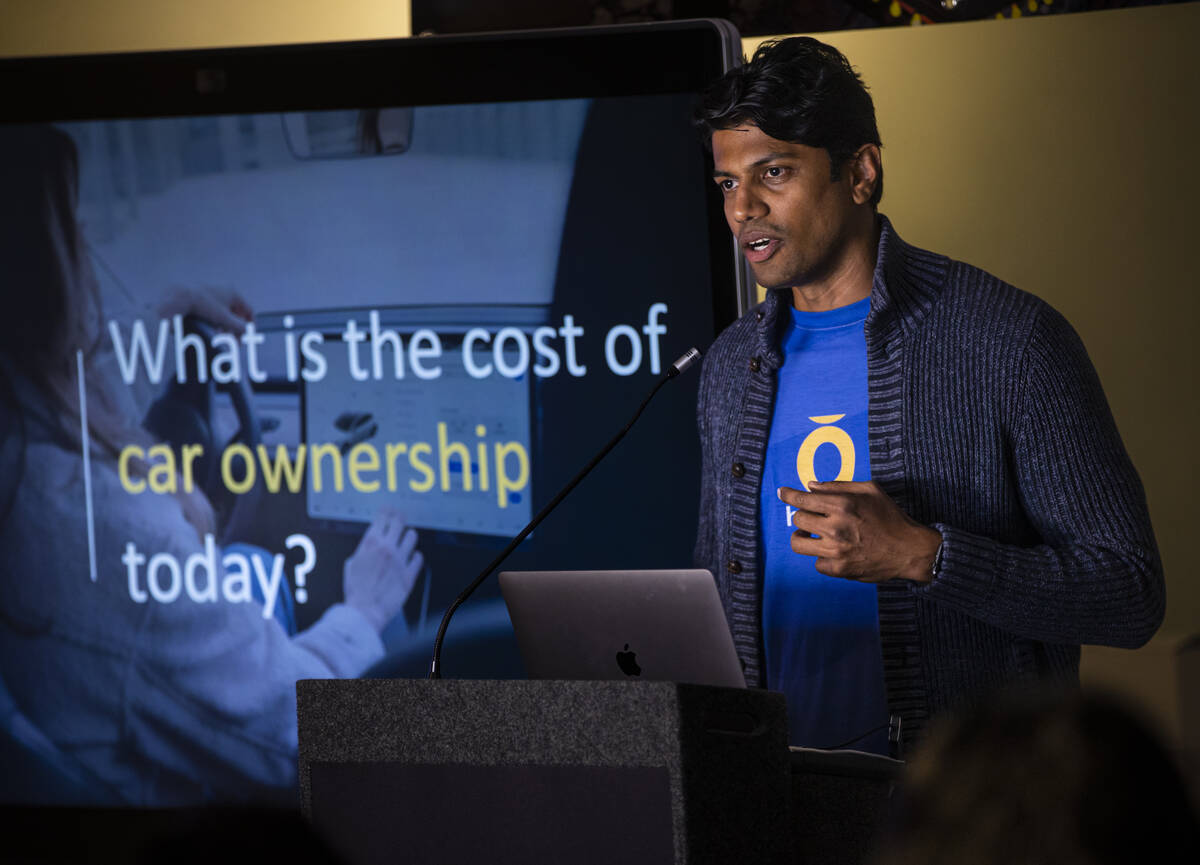 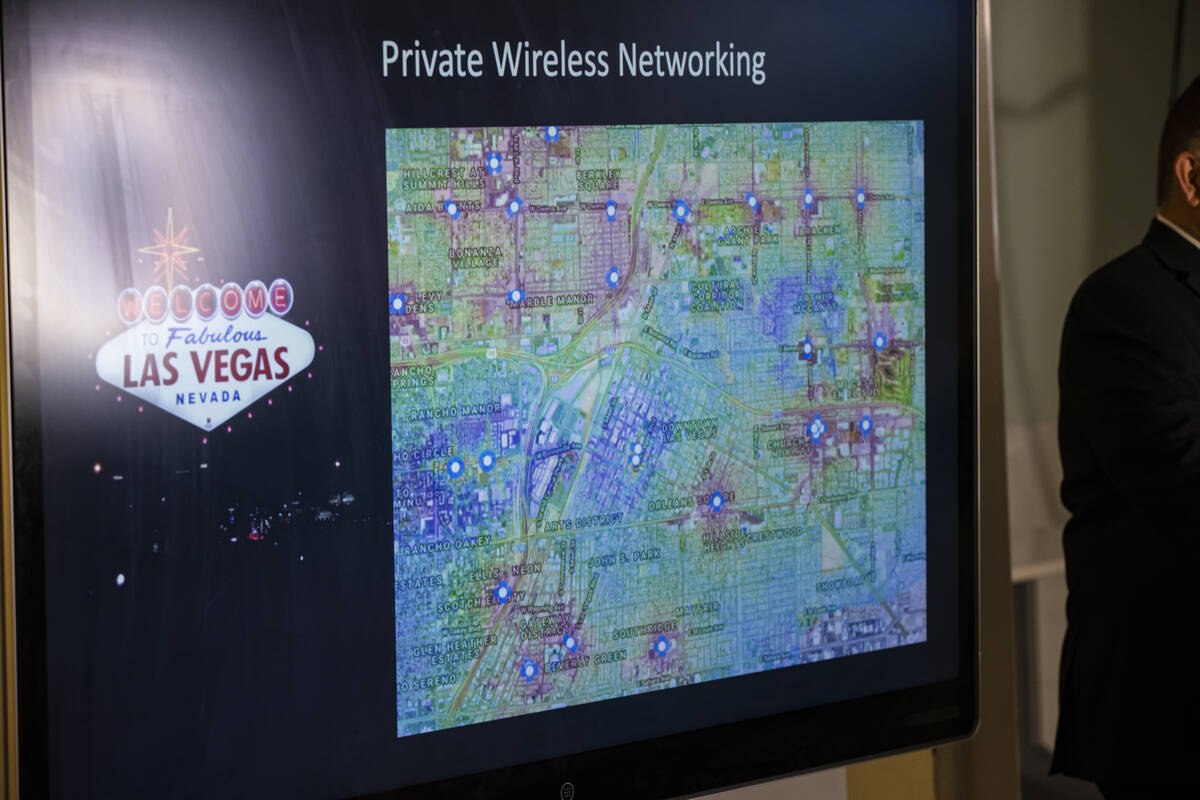 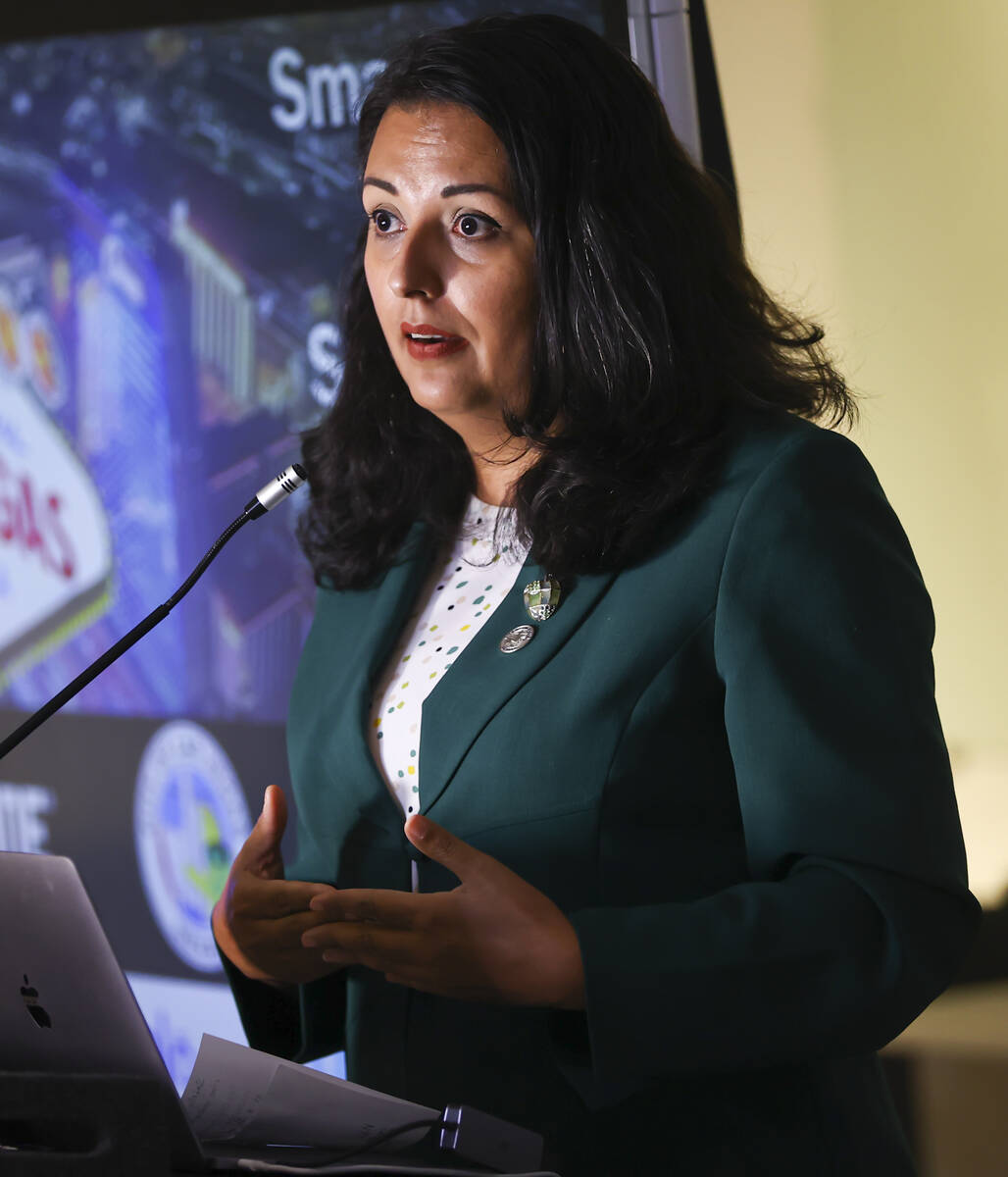 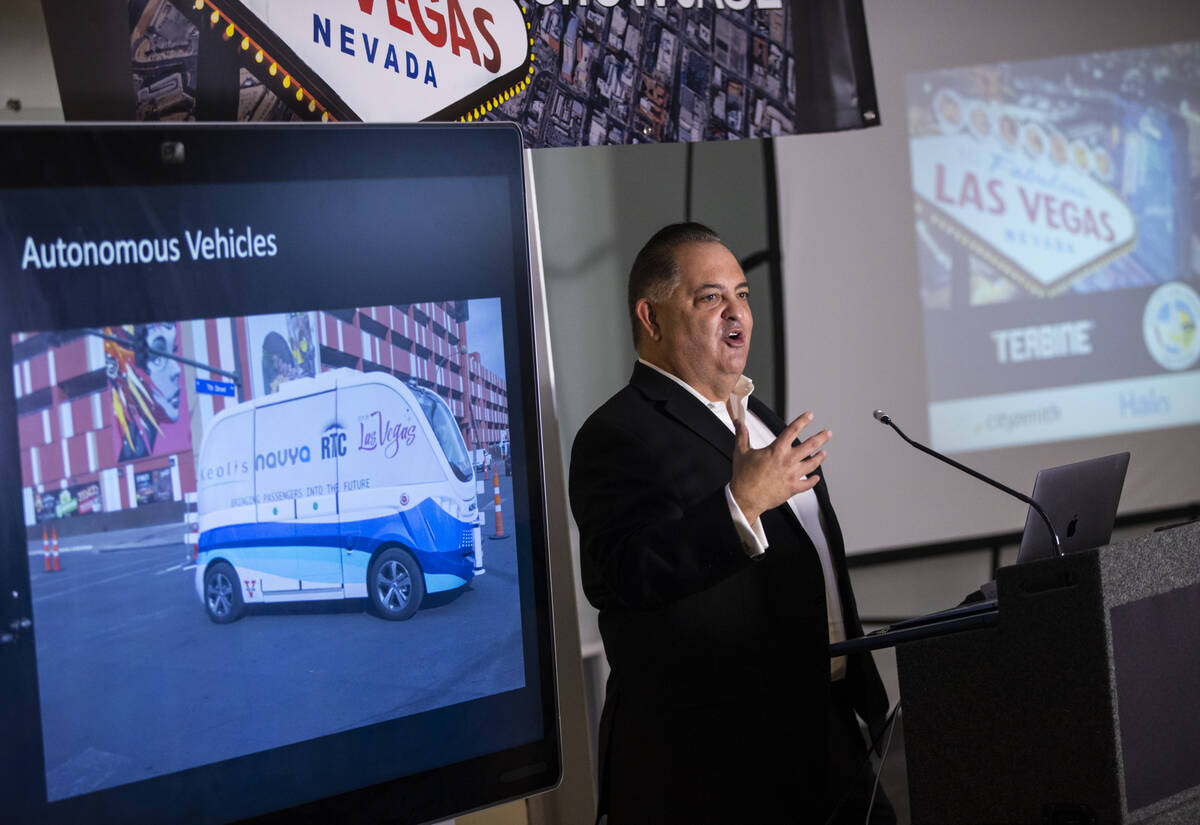 Pretty soon an automated voice will warn pedestrians to stop climbing on the showgirl sign, which features two 26-foot-tall showgirls and a city of Las Vegas sign just north of The Strat on Las Vegas Boulevard.

“If you fail to get off the sign, eventually a real uniformed individual will come help you off the sign,” Michael Sherwood, chief innovation officer for the city, said Tuesday evening.

And how will the city detect the climber? Sensors.

City leaders such as Sherwood along with tech firms such as Las Vegas-based startups Terbine and Halo gathered in downtown Las Vegas during CES last week to unveil a number of projects making Las Vegas a smart city — a goal it adopted in 2018 and hopes to achieve by 2025.

Smart city technology — think cameras on traffic lights and other data-collecting devices — helps cities tackle dangerous driving, extreme weather, crime and even allow for autonomous cars. But Las Vegas officials and tech firms have more ambitious ideas of what the technology can do.

“The whole point of the system is to provide a working test bed for smart sustainable city technology that is going to be a lightning rod to attract other companies and agencies … and most importantly, show it to cities around the world so they can emulate it,” Terbine CEO David Knight said.

Chicago-based startup Cityzenith was on hand to present the first stage of its digital twin project in partnership with the city and Terbine.

Having a digital twin will allow developers and landlords to cut operating costs and emissions as well as help city officials monitor everything from compliance goals to even the creation of a predictive maintenance model.

“Imagine being able to know when a pothole is being formed in a roadway,” Sherwood said. “How do you know that today? You don’t. You drive over it and get mad at the city because no one ever knows there’s a pothole.”

Sherwood said data collected from sensors throughout downtown is fed into its digital twin model, which will allow the city to see road deterioration and then run models into the future to know which roads should be prioritized for resurfacing or repair.

“If you catch a pothole in the very beginning, it’s much cheaper to repair than it is once it becomes a larger hole,” he said. “It’s about creating better experiences. That’s really the goal of these technology efforts.”

But even before last week’s introduction of the city’s digital twin, sensor data has already helped resolve issues in Las Vegas.

NTT Data, an IT and business services firm headquartered in Tokyo, launched its pilot smart cities program with Las Vegas in 2018 — installing hundreds of sensors, including cameras and audio sensors.

John Saez, NTT’s business development lead, showed attendees a brief video clip of a wrong-way driver at an intersection near city hall. He said the video came about after city leaders wanted to figure out how to reduce accidents involving wrong-way drivers at the site.

“We were able to count the frequency of these wrong-ways, what time of day this was happening and then look at the video to see what’s going on with that particular incident,” Saez said. “We found 30 wrong-way drivers on any given day on average.”

With that information, city leaders were able to put up road signs; after 30 days, NTT found a 50 percent decrease in wrong-way drivers.

Every city is collecting data in high volumes, but unlike Las Vegas, many haven’t figured out how to translate that information into action, Knight said.

“People don’t think of Las Vegas when you say sustainable city, but because of issues to do with electricity, water conservation — all these things are going to be more important going forward,” he said. “We want to go beyond the obvious (uses) like traffic.”