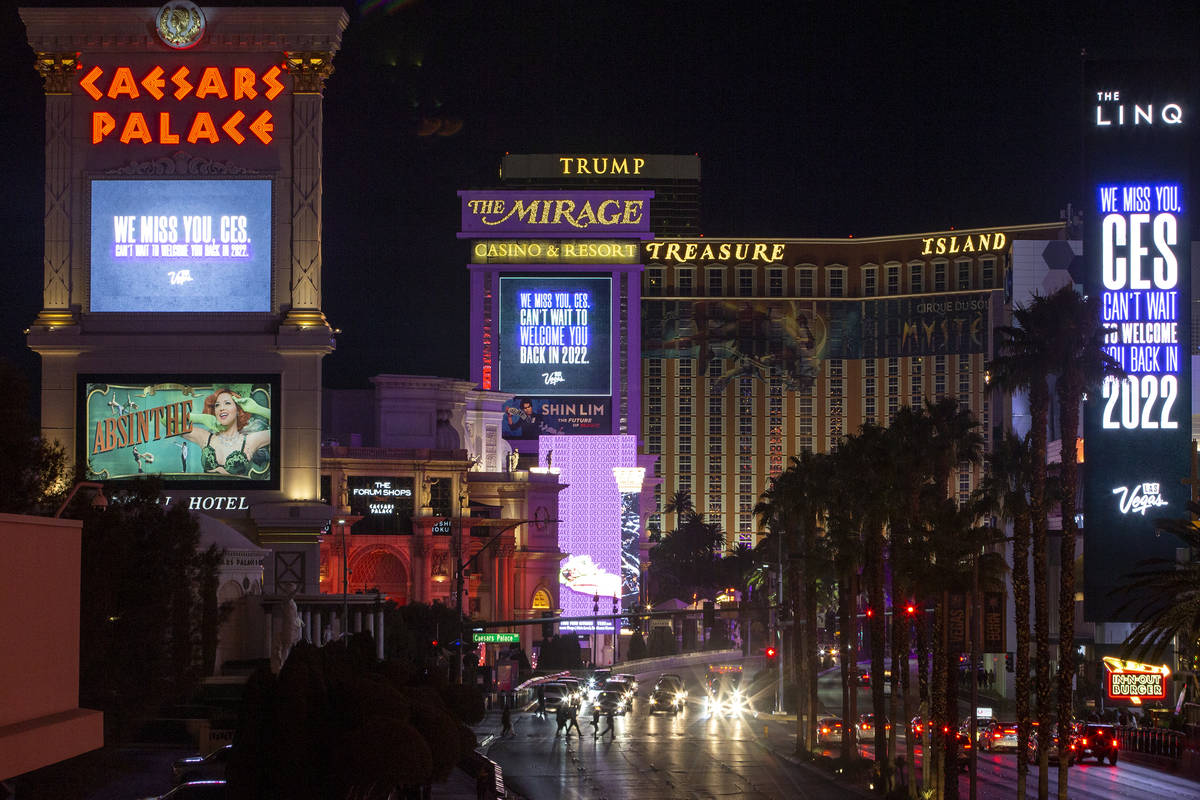 Marquees at Caesars Palace, The Mirage and The LINQ memorialize CES, which would have started on Monday but is moved online due to the COVID-19 pandemic, on Sunday, Jan. 10, 2021, on the Las Vegas Strip. (Ellen Schmidt/Las Vegas Review-Journal) @ellenschmidttt

For a city that sees itself as a burgeoning technology hub, the annual CES convention usually offers Las Vegas a chance to rub elbows and schmooze with thousands of companies while trying to lure them to relocate their headquarters.

It’s different this year with the consumer electronics trade show taking place virtually in light of the pandemic.

But even as the annual event forgoes physical attendance — giving up with it roughly $300 million in economic impact to the region from about 180,000 visitors — Sherwood said that the aim will remain the same.

“Hopefully meeting and working with companies outside the United States to show them, and talk about, the great benefits of relocating and establishing their headquarters here,” he said. “We’re still going to aggressively work. Still a great networking opportunity, even in a virtual space.”

The city launched its Innovation District in a broad swath of downtown in 2016, serving as a testing ground for new forms of transit, social infrastructure, alternative energy and more. And it is downtown where it opened a second innovation center just pre-pandemic and successfully courted a biomedicine company to set up shop.

The pandemic has affected how the city approached technology and innovation initiatives in 2020, most significantly in that it bumped efforts to the side in exchange for focusing on higher priorities such as a remote workforce and call center to respond to pandemic-related needs.

So-called “smart city” technologies in Las Vegas have generally revolved around public safety, however, so the shift was not misaligned with the city’s overall vision, according to Sherwood.

While much of the projects in the queue unrelated to the pandemic have been dormant or slow moving during the global crisis, he said they should ramp up in 2021.

Meanwhile, city staff are approaching this year’s CES no differently than in the past.

Sherwood saw some positives to the change: Staff members are not encumbered by having to shuttle or drive the few blocks to the convention; and instead of making the sometimes difficult choice of which events to attend for fear of missing others, employees can simply watch recorded presentations later.

Certainly there are negatives.

“I really like seeing a lot of the technology, touching it and being part of it,” he said.

Although no vendors will come to City Hall to meet with officials before the trade show as in prior years, Sherwood said he will still be on the lookout for drone, autonomous vehicle, and cybersecurity solutions during the four-day online event that began Monday.

Nonetheless, he admitted, he perhaps might be most thinking about 2022.

“Obviously for a lot of reasons for us, we’re looking forward to next year already,” he said.