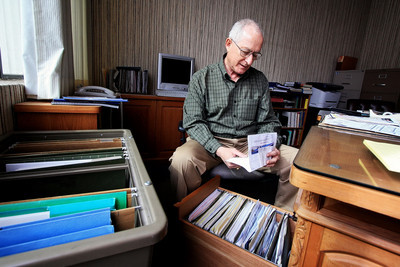 It may be great for their businesses; but, overall, it can’t be good.

First, it was more consumer-generated, but now it looks as if businesses are doing it too — not paying their bills.

“There’s a huge amount of debt out there,” said John Wanderer, a Las Vegas attorney who has been collecting delinquent accounts since 1992.

Transworld Systems, which offers its GreenFlag Profit Recovery service to Las Vegas companies, has also benefited from an increase in unpaid bills. Profit Recovery is a type of collection that charges a flat rate, based on volume, for each account. Business has jumped 38 percent since 2007. That jump led to more jobs at Transworld’s Las Vegas office, district manager Valerie Martinet said.

“Consumers have always been slow to pay, but now (debtor) businesses are unable to pay,” she said. “What we are seeing now is businesses that have never seen the need before are now contacting a third-party (collector).”

Nevada Association Services, a collection agency that deals exclusively in collecting money owed to homeowners associations, has experienced a 15 percent to 20 percent increase in accounts since last year, said David Stone, the company’s owner and a collections industry lobbyist.

“We are getting a lot more delinquencies caused by foreclosures, and we are at a record rate of working with homeowners who are trying to keep their homes,” he added.

Nevada Association Services hasn’t added staff, but has had employees work nights, weekends and overtime to handle all the accounts.

Too little and too late

The surge in collection accounts has been a boom to some, but a bust for others. For example, CMA’s 20 percent increase in accounts is offset by a 10 percent drop in the total dollar amount collected year-over-year.

Typical collection agencies get paid only a contingency fee based on what they recover. That percentage can range from the low double-digit percentages to as high as 50 percent.

If the debtor has little or no money to pay bills, the agency may end up losing staff hours on the account.

Giolito said she has tons more work, but not much extra money to show for it. Not yet at least.

“The amount of work coming into my office may be higher, especially from doctors’ offices, but the ability to pay just isn’t there,” Giolito said.

Housing-related debts can be particularly tough to collect. Normally, people who have lost homes are a lost cause for collection agencies, Stone said. The lender foreclosing on the home is on the hook for up to six months of homeowners association fees. The rest will likely never be recovered.

Sometimes a bill collector’s cut is low, especially when a debtor has to be taken to court, Wanderer said. Eight percent to 25 percent is the norm he sees on such cases. Wanderer, who is considered a local pioneer in collections law, is usually able to squeeze out 12 percent to 18 percent.

“The court costs are so high on collection cases, we will take a commission,” he said. “I tell people don’t spend a lot of money trying to get the debt.”

Businesses are waiting too long to send delinquent accounts to collections, many observers say. Richard Billman has been a debt collector for almost 35 years, and has been with Las Vegas-based Quantum Collections since 1976. Today, as the company’s executive vice president, he laments how medical clients hang onto past-due accounts until it is too late, he said.

“Say you have a large medical practice, the doctor is hunting for dollars,” Billman recalled. “I had one medical client that took back all the accounts and kept his people on, in-house, trying to collect.”

Those troubles are compounded by banks that are now selling debt “paper” to companies for as little as 16 cents on the dollar to generate cash quickly, he added.

Companies will also try to preserve their relationships with commercial customers, and save on collections’ fees, by not turning them over to a third-party when accounts are delinquent, Giolito said.

“We have found that businesses will hold on to their receivables a little longer (than consumer accounts), to the point the business may be closed.”

The combination of more debt and less money to pay has pressured both debtors and bill collectors, some consumer advocates say. Whether that pressure has caused a rise in federal lawsuits alleging violations of the Fair Debt Collections Practices Act is debatable.

Attorneys for debtors say it has, but many people in collections say the increase in court filings smacks of ambulance chasing and borrower desperation.

“There are seminars that are showing consumers ways to stop paying and get things removed from their credit,” Billman said. “Because people are in binds, you see credit fixers moving in and trying to make money. They are the ones sending out threatening letters, threatening (law)suits.”

Wanderer said he has witnessed “cottage industries” of law firms pop up, with the main purpose of pursuing Fair Debt Collection Act cases and some Fair Credit Reporting Act complaints. Most operate on contingency, he said.

Attorney Adam Krohn sees another side of collection activity. He’s a partner in the Los Angeles office of Krohn & Moss, a consumer law firm that also has an office in Las Vegas. The local office has filed numerous lawsuits.

“You have to understand that these bill collectors don’t get paid unless they bring in the money, so they cheat,” he said. “They have to feed their families, so they get as desperate as the people in foreclosure.”

Krohn said one of the worst cases he can recall involved a debtor who returned to England because he feared for his family’s safety. The bill collector had been so aggressive that he had scared the man out of the country.

Harassment, threats, calling debtors at work without their consent, failing to validate a debt upon request and communicating the debt information to third parties are all forbidden under the Fair Debt Collections Practices Act.

In November, Academy Collection, a Philadelphia company with a Las Vegas office, agreed to pay $2.25 million to the Federal Trade Commission to settle alleged violations of the Fair Debt Collections Practices Act. The record settlement resulted from allegations that the agency was abusing and harassing customers to the point of threatening debtors with imprisonment.

Giolito said abuses are the exception, not the norm. She leads the Nevada Collectors Association, the local division of the national collection industry group ACA International. The state division has about 40 members. Those members can be removed from the organization if they participate in illegal activity, she said.

The bill collectors have another reason to avoid heavy-handed practices, added Martinet: the tactics simply don’t work in this economy. GreenFlag instead uses a “more diplomatic approach,” which she said helped the company to a 56 percent average collection rate.

“We do a more diplomatic approach to collection,” Martinet said. “We ask for the money … and in this economy, we have to work with the debtor and set up payment arrangements.”