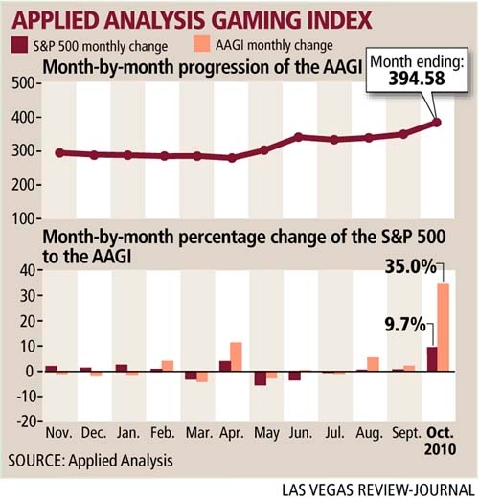 It wasn’t results inside casinos that drove gaming industry stock prices up robustly in October.

Plans announced by several companies that are attempting to improve their balance sheets gave investors confidence in the sector as a whole.

“For many companies, they are demonstrating that they have moved beyond the impact of the recent recession and are looking with an eye toward the future for balance sheet improvement,” Applied Analysis principal Brian Gordon said Friday.

Las Vegas Sands recorded the largest increase during the month — a 20 percent jump in its average daily stock price — but the company’s performance was largely due to its third-quarter earnings. The company reported a 67.3 percent increase in revenues and reversed a net loss from a year ago into $168 million in profits.

The company’s new casino in Singapore and its holdings in Macau drove those results.

Double-digit stock price increases by MGM Resorts International and Boyd Gaming Corp. were in response to efforts by the casino operators to upgrade their balance sheets.

MGM Resorts International received $486 million in net proceeds from a bond offering and $511 million from a stock sale, which will be used to retire $1.2 billion in commitments under its senior credit facility, which are scheduled to mature in October 2011.

MGM Resorts Chairman Jim Murren has said paying down the company’s $13 billion of long-term debt has been a primary goal of management. In an interview with Bloomberg News last week, Murren said the company and Dubai World, its joint venture partner in CityCenter, are seeking to refinance a $1.8 billion loan that covers the Strip development.

Boyd Gaming wants to raise $500 million in a private placement transaction to pay off or refinance some of its existing debt.

Harrah’s Entertainment, which was taken private in January 2008 through a $29 billion private equity-led buyout, took steps to return to the public market, filing a registration to sell stock. The potential stock sale could raise between $500 million and $1 billion for the company, which plans to use the funds to complete a hotel tower at Caesars Palace and on a casino development project in Ohio.

The moves seemed to boost the spirits of investors in the gaming sector.

“A number of companies are doing things like pushing debt maturities further while garnering attractive interest rates and freeing up some liquidity,” Gordon said.

The only gaming company to show a drop in its average daily stock price during October was slot machine giant International Game Technology, but the decline was less than 2 percent.

One gaming analyst Friday cautioned that consumer spending will be the ultimate gauge of the casino industry’s recovery. Andrew Zarnett of Deutsche Bank cited a Gallup Poll that suggested consumer spending would continue to be weak.

Zarnett said regional and Las Vegas casino operators have experienced a continued softness in how much consumers are willing to spend per visit.