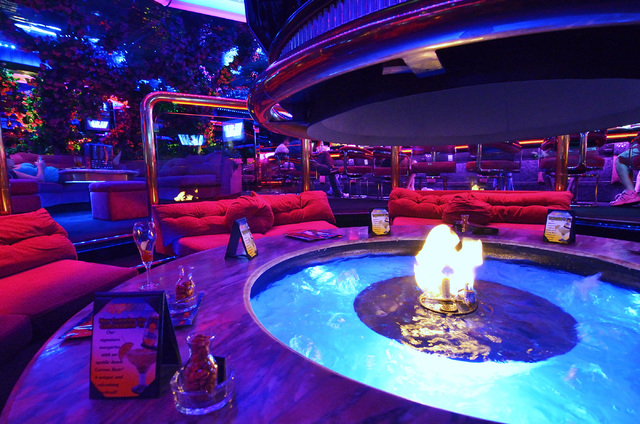 The Peppermill Fireside Lounge’s future has gone from safe to really safe, its owner said Friday.

One of the Strip restaurant’s longtime owners, the Doumani family, will take over 100 percent ownership of the building and its 1.1-acre parcel at 2985 Las Vegas Blvd. South, north of Convention Center Drive.

The Doumanis owned 40 percent of the property, while the estate of Mildred Ash, the wife of a former development partner, owned 60 percent.

A District Court order in Clark County n Friday decreed that the Ash estate’s share of the real estate be sold to Lorenzo Doumani for $10.65 million. The order followed a public court auction at which Doumani was the only bidder.

The Feb. 10 petition to sell the property listed the entire parcel’s value at $17.73 million. The petition also set the sale amount of the 60 percent interest, and stated that the buyer should be Lorenzo Doumani.

But it wasn’t necessarily a done deal.

Local probate attorney Thomas Grover of Goodsell &Olsen said he was watching the public auction of properties Friday morning when the sale came up, amid auctions of $150,000 and $350,000 homes.

It’s unusual to see a commercial property with the Peppermill’s value in a court auction, Grover said. Such properties usually are held in trusts or corporations and bypass probate court.

“I turned to another attorney and said, ‘Did they say $10 million?’ For this to go into probate was really unusual,” Grover said.

It was also notable that no other parties bid, Grover added. Although the petition for sale sought to spin off the property to Doumani, any other party could have bid more than $10.65 million and purchased the real estate.

The auction was noticed in Nevada Legal News before the sale. Typically, multiple bidders chase homes on the auction block, although the Pepermill’s multimillion-dollar price tag would have “pushed other people out,” Grover said.

“It’s interesting nobody showed up, because it’s such a prime piece of real estate,” Grover said. “If someone had showed up and outbid (the Doumanis), they could have ended up with a majority co-owner not of their choice, which would have made it really interesting.”

Doumani said Friday that nothing will be different at the Peppermill, which his family developed and has co-owned since it opened in 1971.

“The only new thing is that the Peppermill is even more secure. Now, there’s zero chance of anything happening to it,” Doumani said. “It went from 99 percent secure to 100 percent secure.”

Doumani said he will remain the managing partner of the property. He recently renewed the restaurant’s lease through 2027 and spent more than $300,000 upgrading its kitchen equipment. The Peppermill is operated by a Reno-based group of hotel-casinos and restaurants.

The Friday deal was part of an effort to “clean up estate planning so the place can remain for a long time, without any heirs coming out of the woodwork or attorneys saying they want to sell it. I want it preserved as long as I’m alive,” said Doumani, 52.

The Ash estate had languished in court for about a decade because of tax issues and internal family disputes, Doumani said.

He added that he has been frustrated by recent TV reports that the Peppermill’s survival is in doubt as the Las Vegas Convention and Visitors Authority prepares to expand onto the Riviera site north of the restaurant. The authority’s plans are no threat to the Peppermill, Doumani said.

The authority’s board voted Feb. 20 to buy the 60-year-old Riviera for $182.5 million. The agency said it plans to implode the Riviera and build a convention center on the site.

It won’t be the first area implosion of 2015: On Feb. 10, Doumani imploded the Clarion, just around the corner from the Riviera and the Peppermill at 205 Convention Center Drive. Doumani bought the site in October with plans to redevelop it.

He said the authority’s announcement hasn’t changed his building plans, which he declined to detail Friday. But he welcomed the agency as a new neighbor.

“We’re excited about the (authority’s) Riviera acquisition. It will be wonderful for the area. From the plans we’ve seen on the Web, it looks spectacular. I think the whole area will look different in five years. It doesn’t change anything about what we’re going to put there. It actually reinforces what we want to do. It will be a win-win for the entire community.”