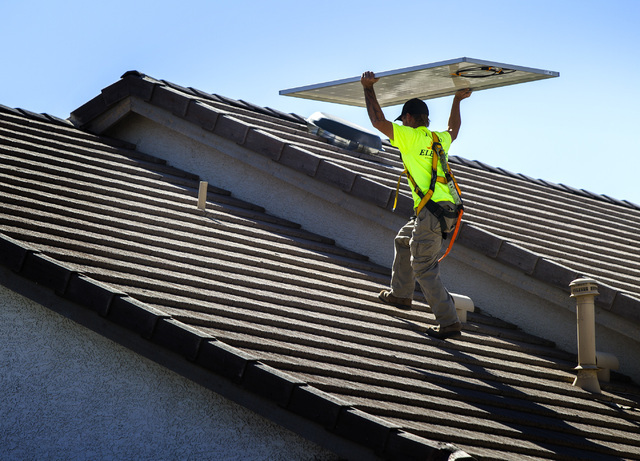 CARSON CITY — State utility regulators on Friday brought a close to one of the most divisive issues in recent memory when they unanimously approved grandfathering in as many as 32,000 existing residential rooftop solar customers under prior, more favorable utility rates for 20 years.

The contentious issue has raged since 2015 when the state Public Utilities Commission created a separate rate class for net metering customers and included existing ratepayers in the new, less favorable rates.

As a result, starting Dec. 1, the 32,000 net metering customers of NV Energy, doing business in Southern Nevada as Nevada Power, will see their fixed monthly charges reduced to the same paid by nonrooftop solar customers. The credit per kilowatt hour they receive for excess electricity generated by their systems will increase to the 11 cents in place in 2015.

Several thousand customers have pending applications that are covered in the agreement but have not completed the connection.

The order will give customers who have not yet connected until Feb. 28 to opt in to the grandfathering provisions.

Gov. Brian Sandoval said he supports the decision, which will provide certainty to both the consumers who are entered into existing agreements and the rooftop solar industry.

“Nevada remains one of the top five states for solar resources because of our large-scale projects and thriving residential market,” he said. “I have been and will remain an advocate for a robust renewable energy portfolio in Nevada and we will continue to pursue new opportunities while maintaining reasonable utility rates for Nevadans.”

Paul Caudill, NV Energy president and CEO, said the filing made by the utility in late July was the most efficient and timely way to resolve the issue.

“The Public Utilities Commission of Nevada’s decision today is fair for this set of existing net metering customers, and at the same time reinforces the clear path forward they established in February 2016 for those considering rooftop solar in the future,” he said.

The new, less favorable rates, which will be phased in over 12 years, will continue for new net metering customers. But there have been almost no new applications since the new rates were adopted by the commission to begin Jan. 1.

The grandfathering issue resolves a serious political problem for Sandoval and state lawmakers.

The agreement was reached by PUC staff, NV Energy, SolarCity and the Bureau of Consumer Protection.

But the long-term issue of rooftop solar development in Nevada remains in limbo as a result of the new rates. The 2017 session of the Nevada Legislature will likely see a number of proposals to restart the industry from rooftop solar companies like SolarCity.

Lauren Randall with the rooftop solar company Sunrun called the decision critically important for consumers who had previously made the choice to install solar.

“Now to restore a thriving solar market in the state, the next step is to reinstate net metering so that all consumers have the opportunity to invest in rooftop solar,” she said.

“The Nevada State Legislature needs to act at the next session to create a new durable policy to eliminate solar fees, restore net metering credits, allow for community and low-income solar development,” he said. “Without these policies, Nevada will continue to lose on solar.”

The new rate structure was approved after the PUC determined there was a $16 million a year subsidy provided to net metering customers from non-solar customers. It was applied to all customers regardless of when they installed their systems.

“This is an important step to establish regulatory certainty in Nevada for customers who have had quite a roller coaster ride this year,” he said in a statement. “We now must put policies in place that support new solar customers in Nevada so that solar jobs can once again increase, and the robust economic activity associated with solar development can resume.”