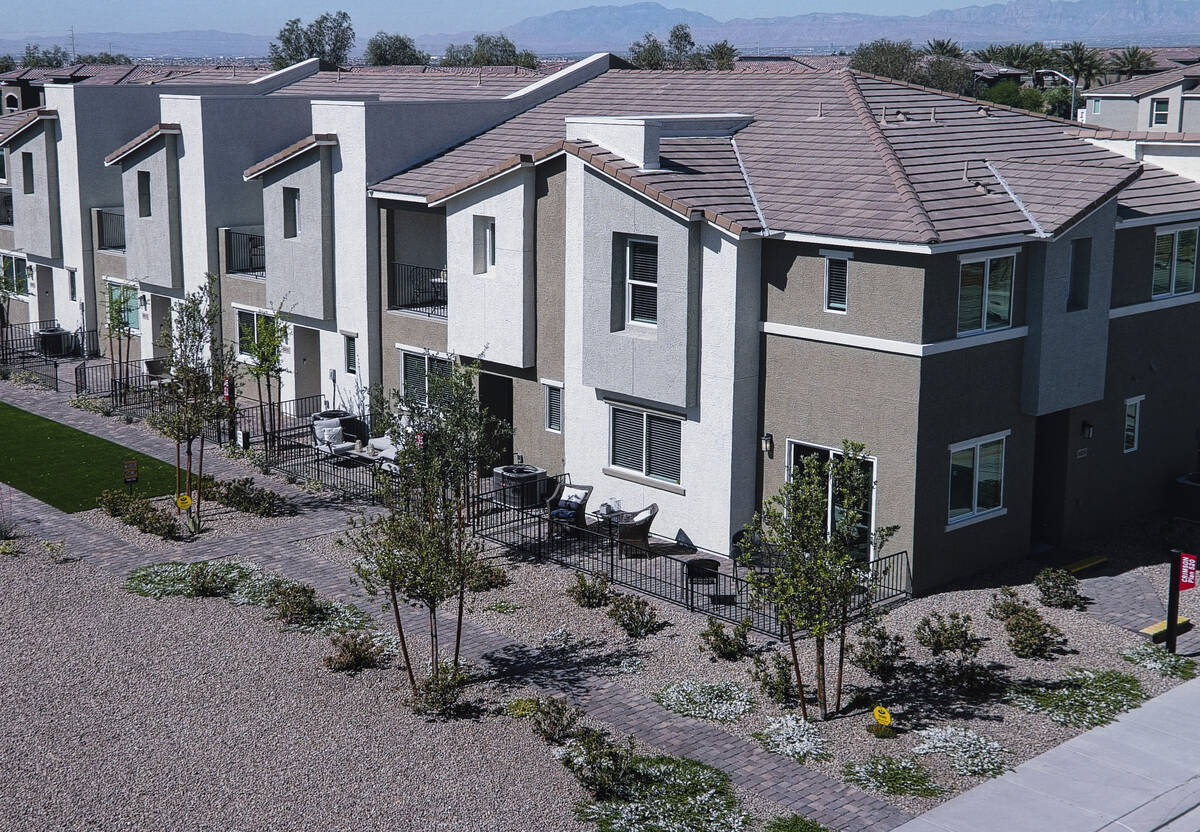 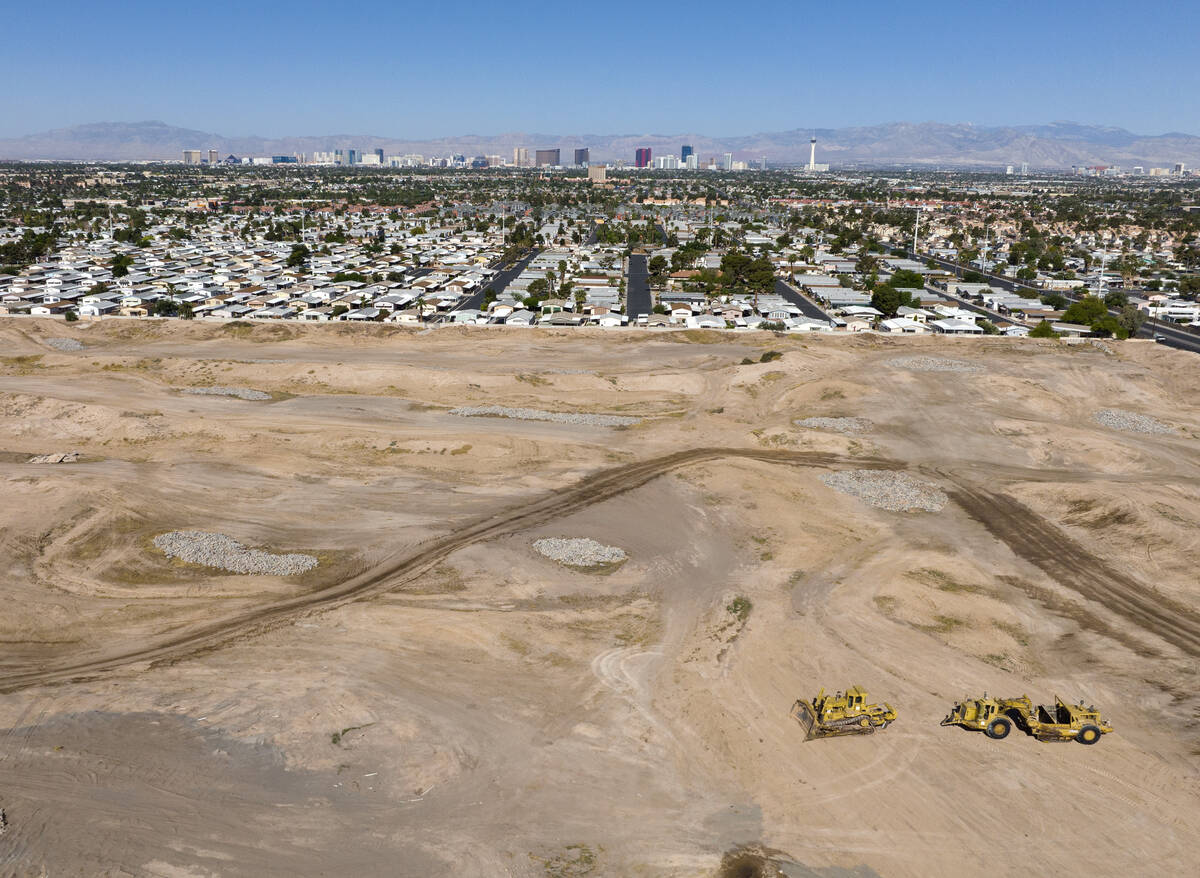 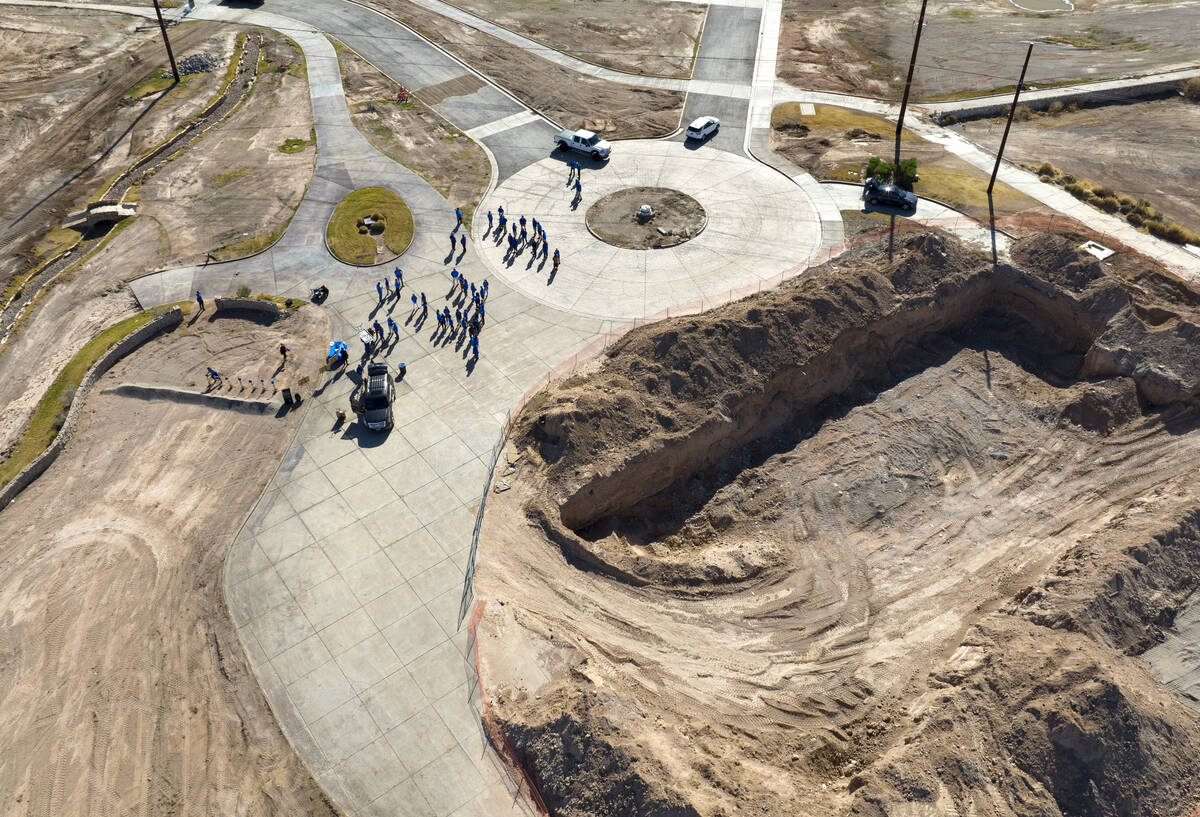 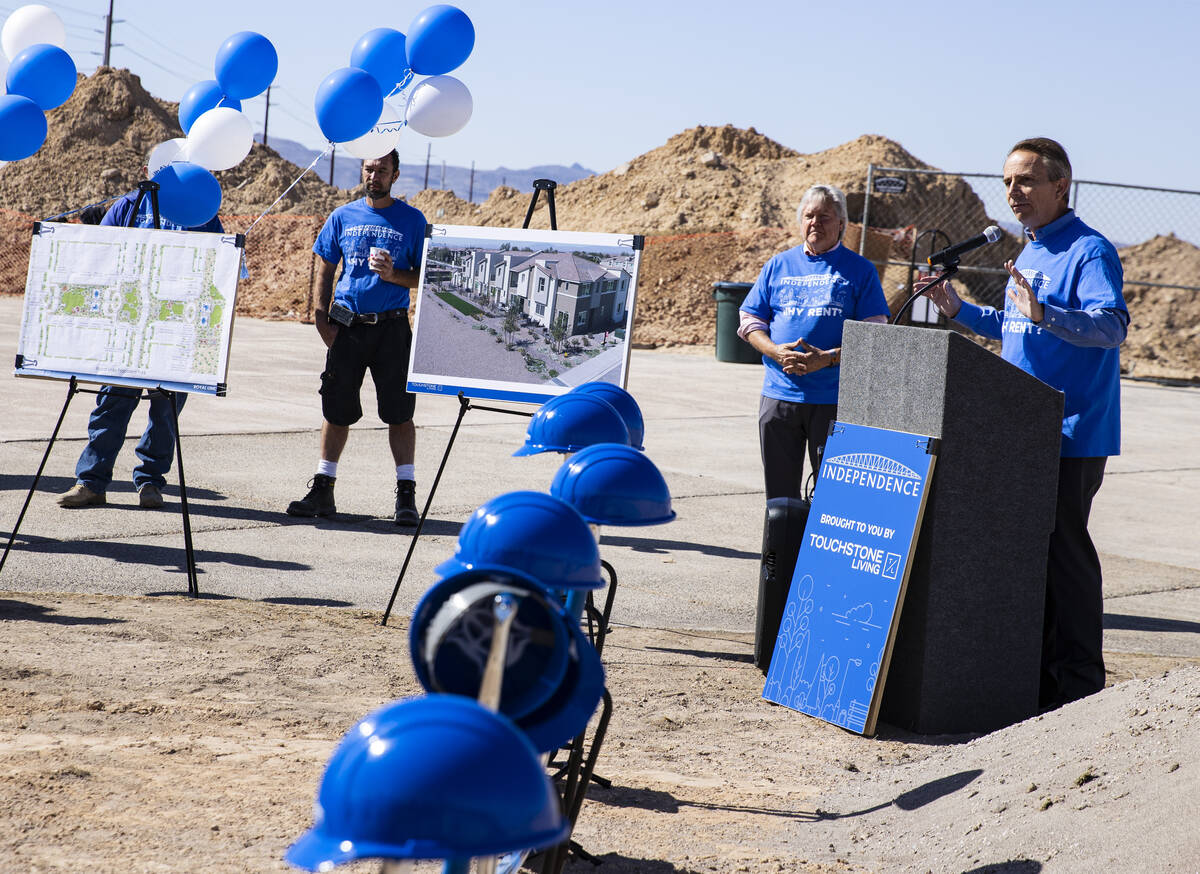 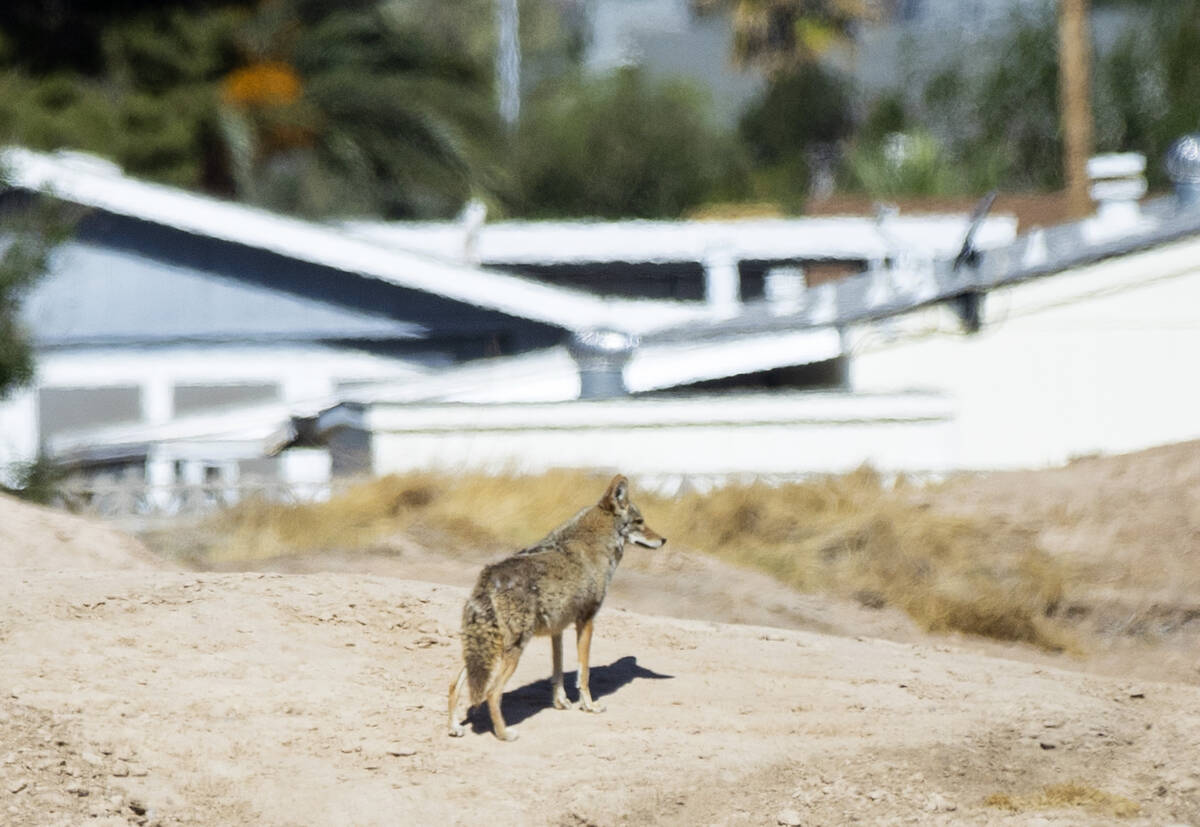 A coyote is seen on Monday, May 9, 2022 at the former Royal Links golf course where Touchstone Living is building a new 1,600-home community called Independence in Las Vegas. (Bizuayehu Tesfaye/Las Vegas Review-Journal) @btesfaye 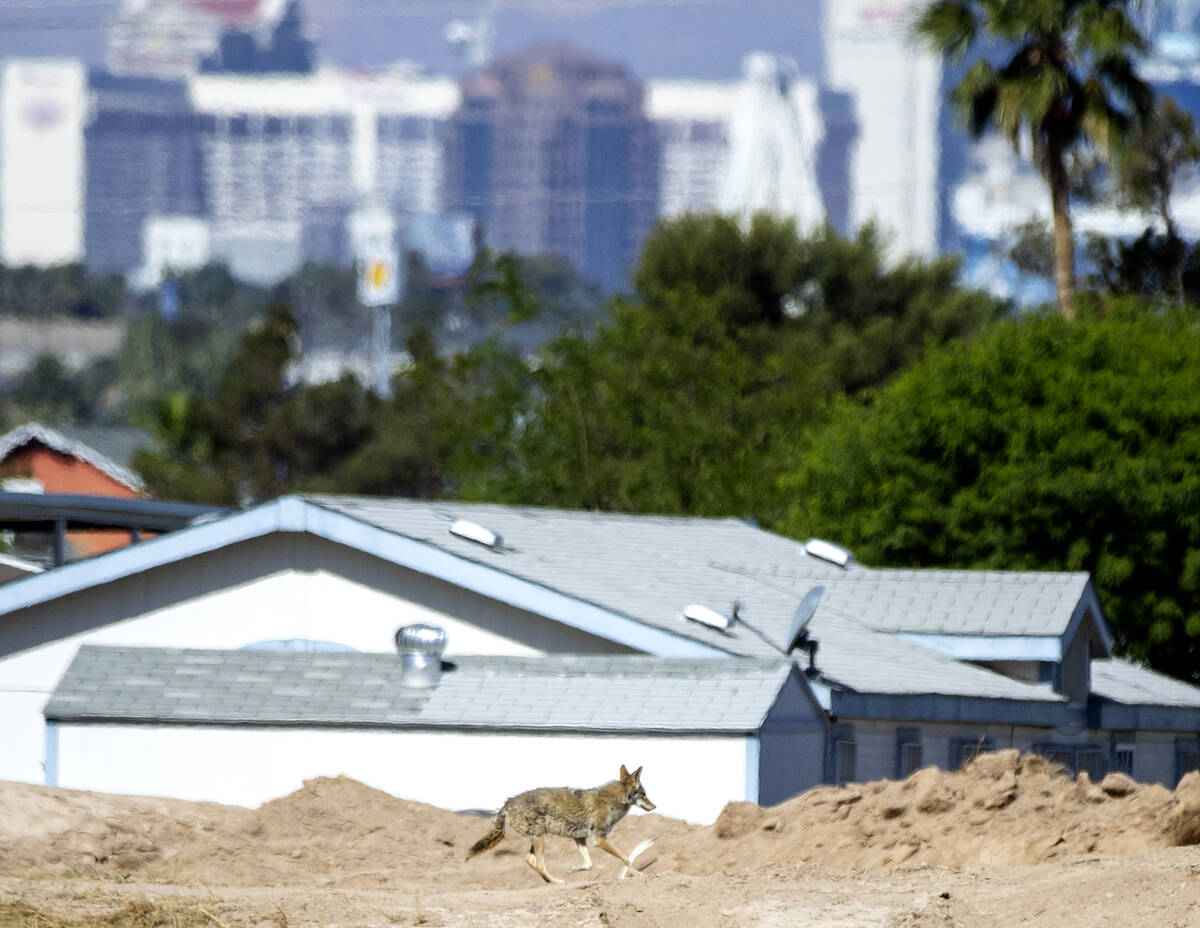 A coyote is seen on Monday, May 9, 2022 at the former Royal Links golf course where Touchstone Living is building a new 1,600-home community called Independence in Las Vegas. (Bizuayehu Tesfaye/Las Vegas Review-Journal) @btesfaye

Located in the eastern Las Vegas Valley — an area that accounts for a fraction of builders’ sales in Southern Nevada — the project is slated to feature 1,600-plus homes as well as parks, pools and playgrounds.

McCormick held a ceremonial groundbreaking Monday, saying that Independence, along Vegas Valley Drive east of Nellis Boulevard, is targeting first-time buyers and will have homes in the $200,000 range.

The event was attended by dozens of people in blue-and-white Independence shirts that declared “Why rent?” as well as a coyote trotting along the west side of the property far from the people gathered there.

According to McCormick, this is the only new-home project in the valley in its price range.

Clark County Commissioner Tick Segerblom, whose district includes the site, told the Review-Journal that when people think of east Las Vegas, their thoughts turn to “older neighborhoods” and “rundown streets.”

Independence, he said, is “bringing vitality.”

“East Las Vegas is a great place to live, and hopefully this project will show that,” Segerblom said.

In Southern Nevada, home construction is heavily concentrated in suburban areas such as the southwest valley, Summerlin and Henderson. The east valley accounted for just 2 percent of builders’ net sales in the first quarter, Home Builders Research reported.

“There’s no land; it’s all built,” Segerblom said, adding that the converted golf course, which spans about 162 acres, is the last big piece of property on the east side.

In March, builders sold single-family houses in Southern Nevada for a median closing price of $483,000, up almost 18 percent from a year earlier, and condos and townhomes for a median of $357,468, up almost 21 percent, according to Home Builders Research.

Both prices were record highs.

Nonetheless, rents also have accelerated in Las Vegas, vacancies are tight, and McCormick figures plenty of tenants still want to own a place.

Touchstone’s buyers at other projects had faced annual rent hikes of 10 percent to 15 percent, if not higher, he said.