Las Vegas homebuilders had their best first quarter in a decade this year amid a “buying frenzy,” a new report says.

The median sales price of last month’s closings was $357,195, up 8 percent from a year earlier. 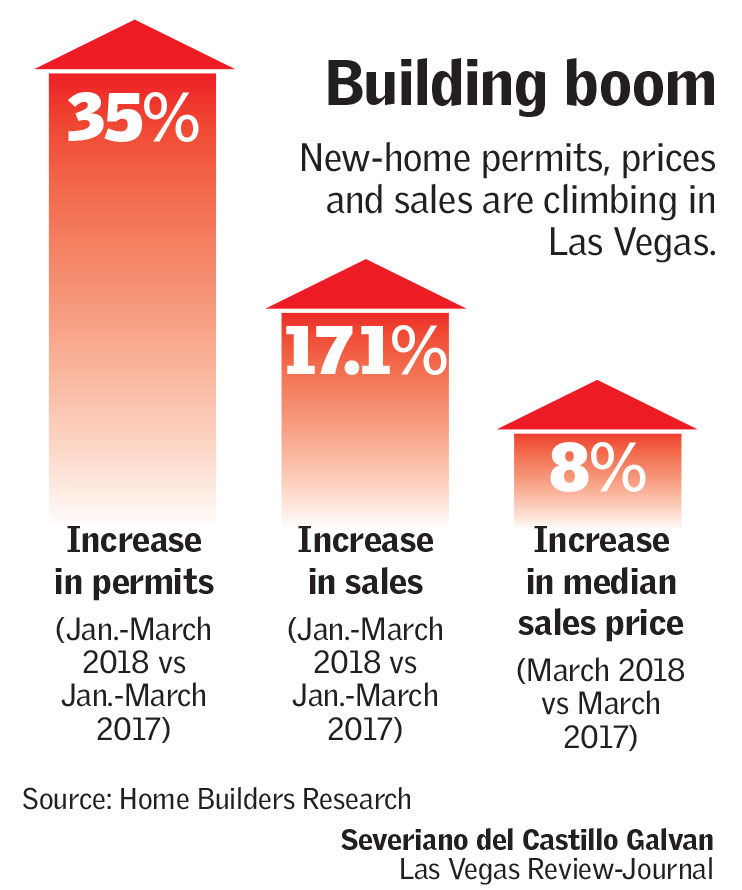 Home Builders Research President Andrew Smith and founder Dennis Smith wrote that the first quarter was the best in a decade for closings and permits, as Las Vegas’ “buying frenzy” produced more than 1,000 of each during the same month for the first time since 2007.

They also noted that Texas builder LGI Homes — which recently entered the local market with the purchase of a vacant subdivision in the northeast valley — targets first-time buyers, especially those living in apartments and rental homes, with heavy amounts of direct mailings.

LGI’s entry marks a rare new competitor in Las Vegas, whose roster of main homebuilders hasn’t changed much in the past several years.

And its 102-house project site, on Lake Mead Boulevard near Lamb Boulevard, sits next to what was a homeless camp as of a few weeks ago.

The encampment had a motor home, shopping carts, tents, a couch and other items scattered about, as well as a makeshift kitchen of sorts outside, with a stocked pantry, cookware and a small table.

It’s “no secret” to any homebuilder in town that there is plenty of demand for affordable new homes, and there are still some available parcels “in some of the less desirable locations” that could allow for lower-priced houses, the Smiths wrote.

“Yes, it is risky,” they said. “However, there are times when another perspective from an outside source can see an opportunity in a different way.”

The median sales price of previously owned single-family homes was $330,000 in July, up 1.5 percent from the record high in June and 8.9 percent from a year ago, Las Vegas Realtors said.

Despite the pandemic’s devastating effect on Las Vegas’ economy, several local communities are in the top 30 nationally for builders’ sales this year.