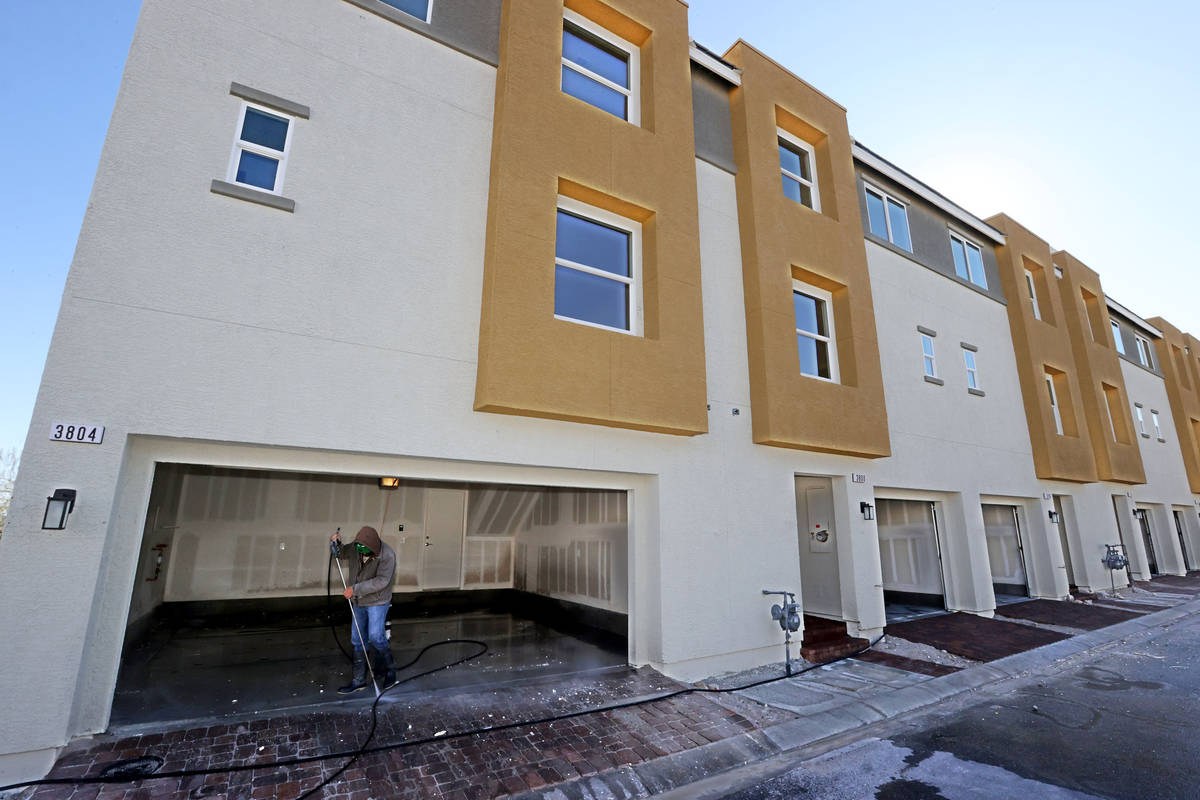 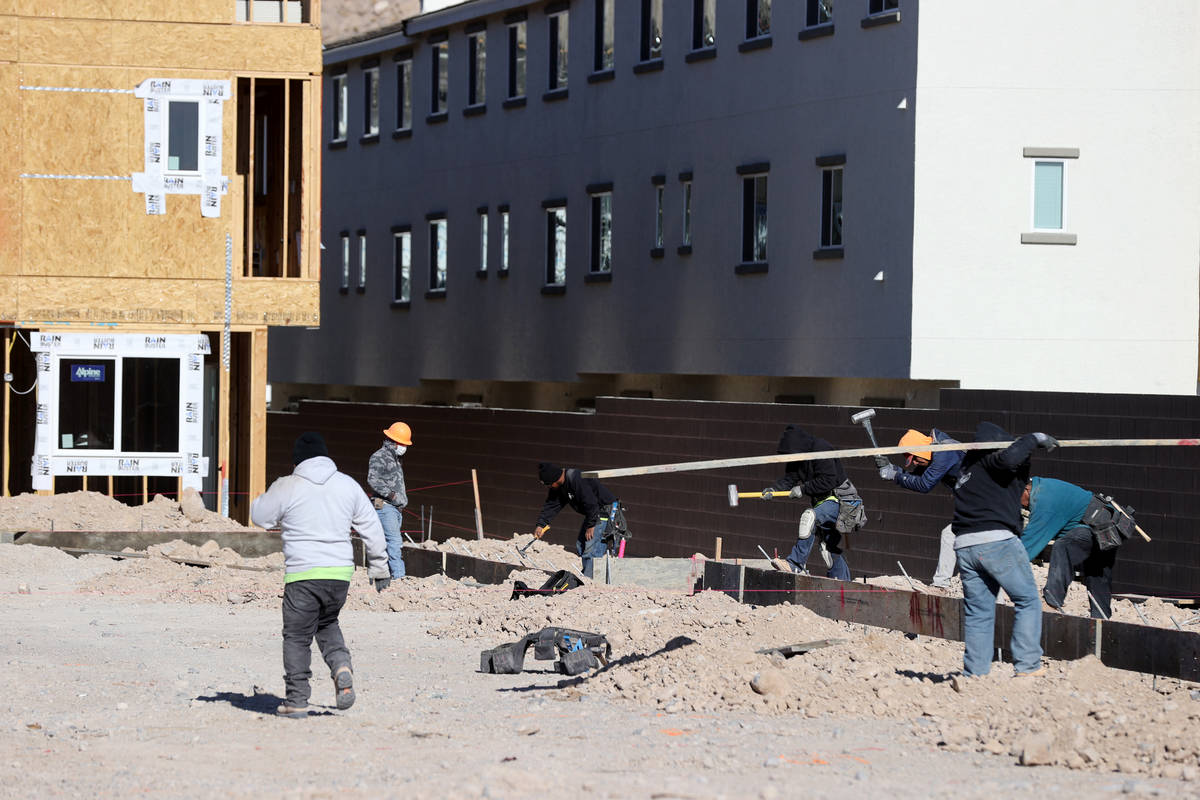 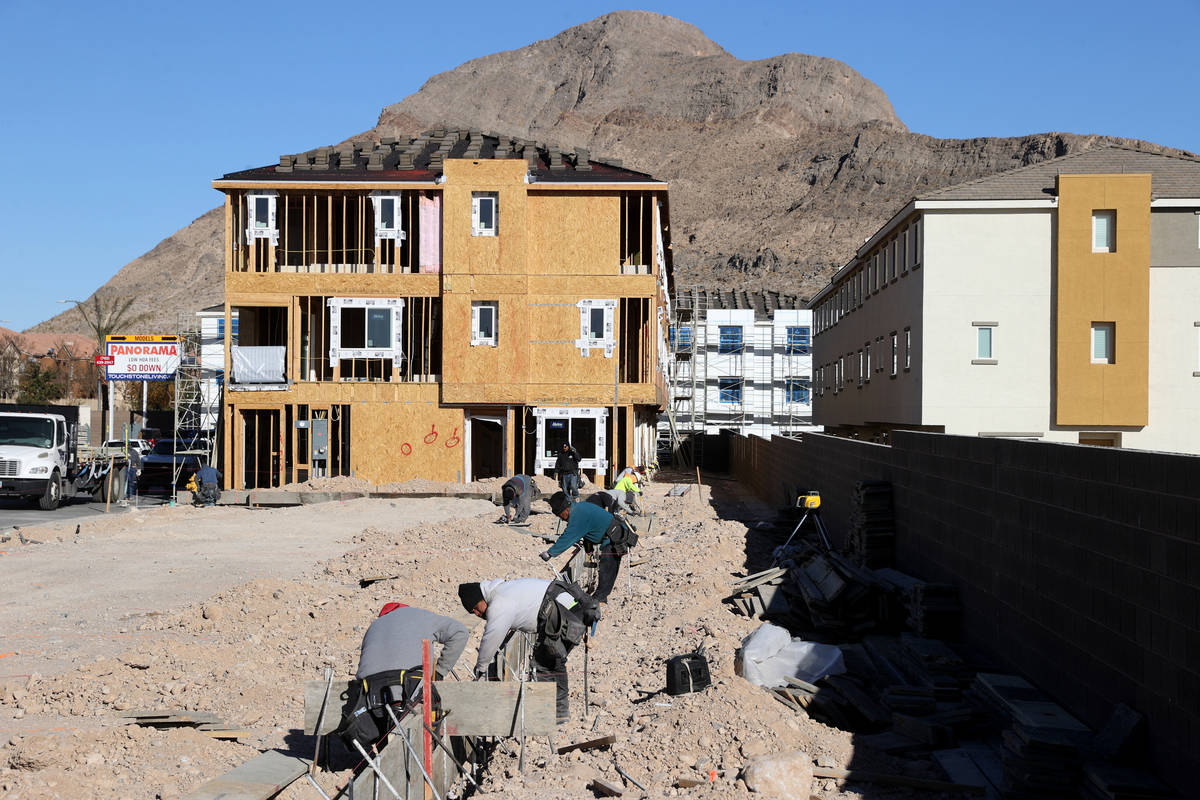 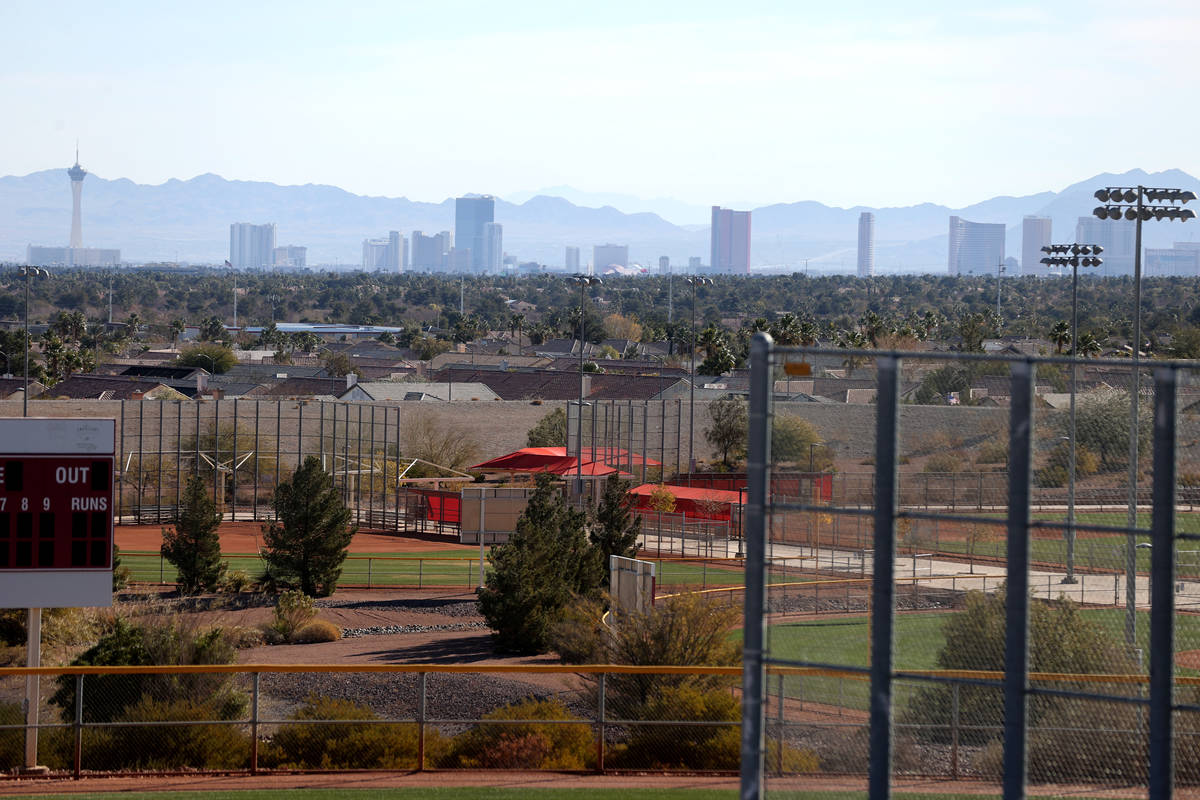 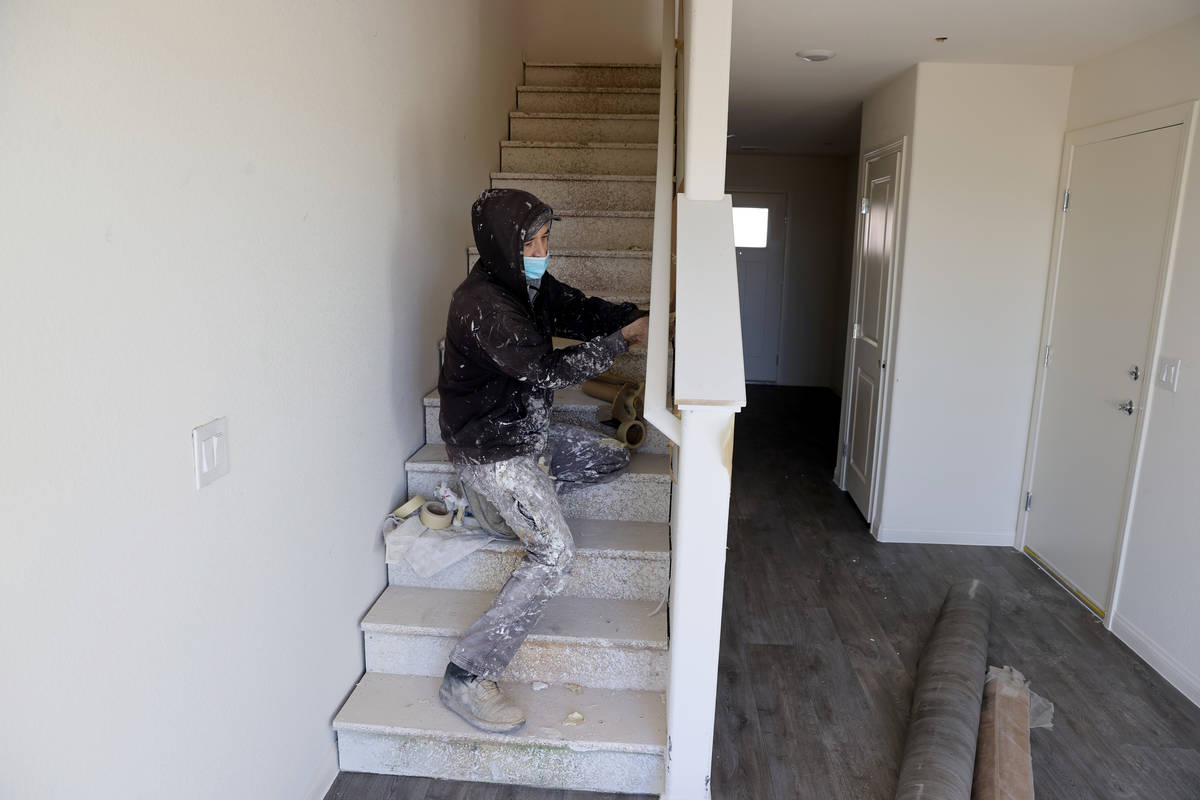 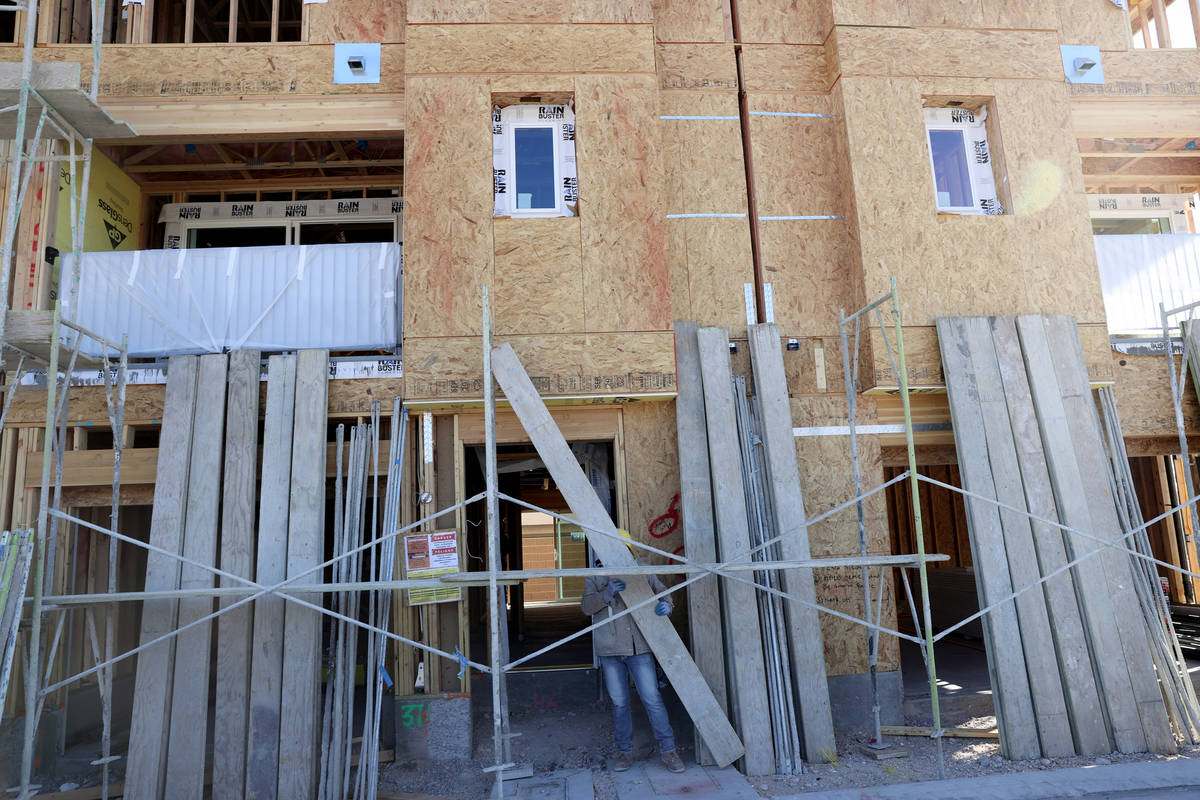 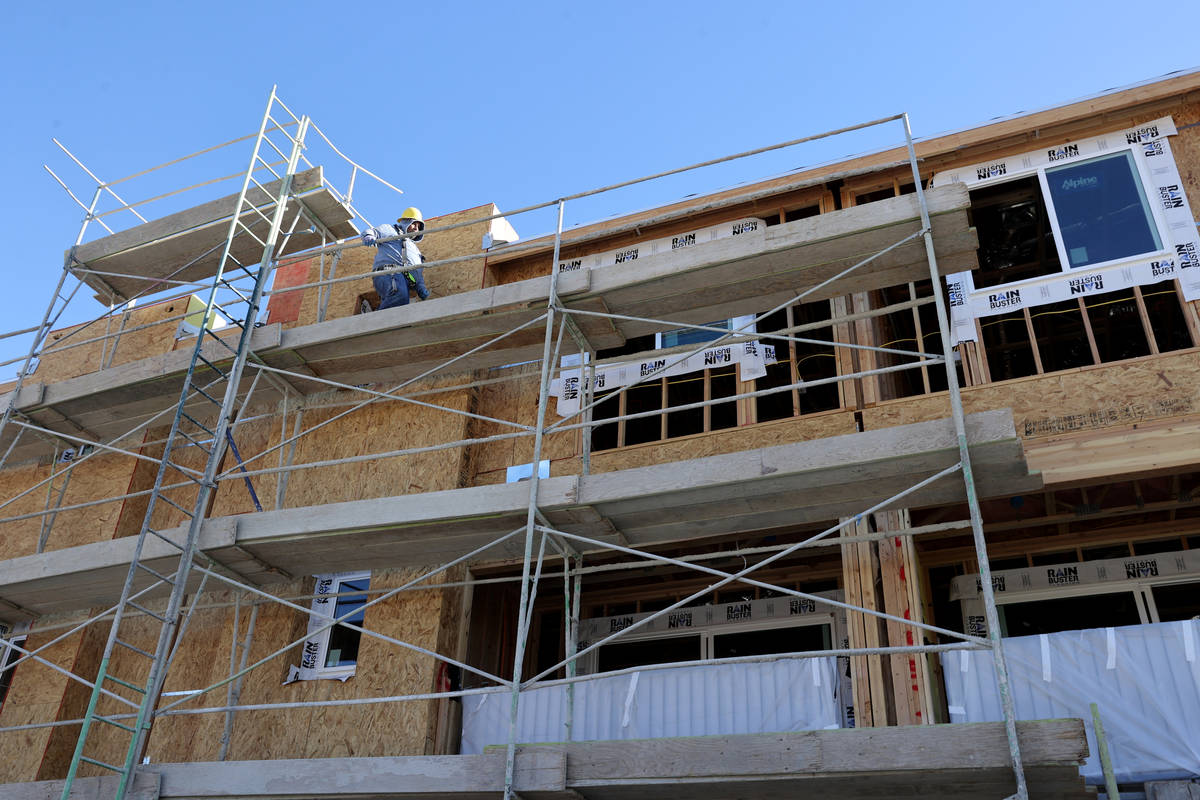 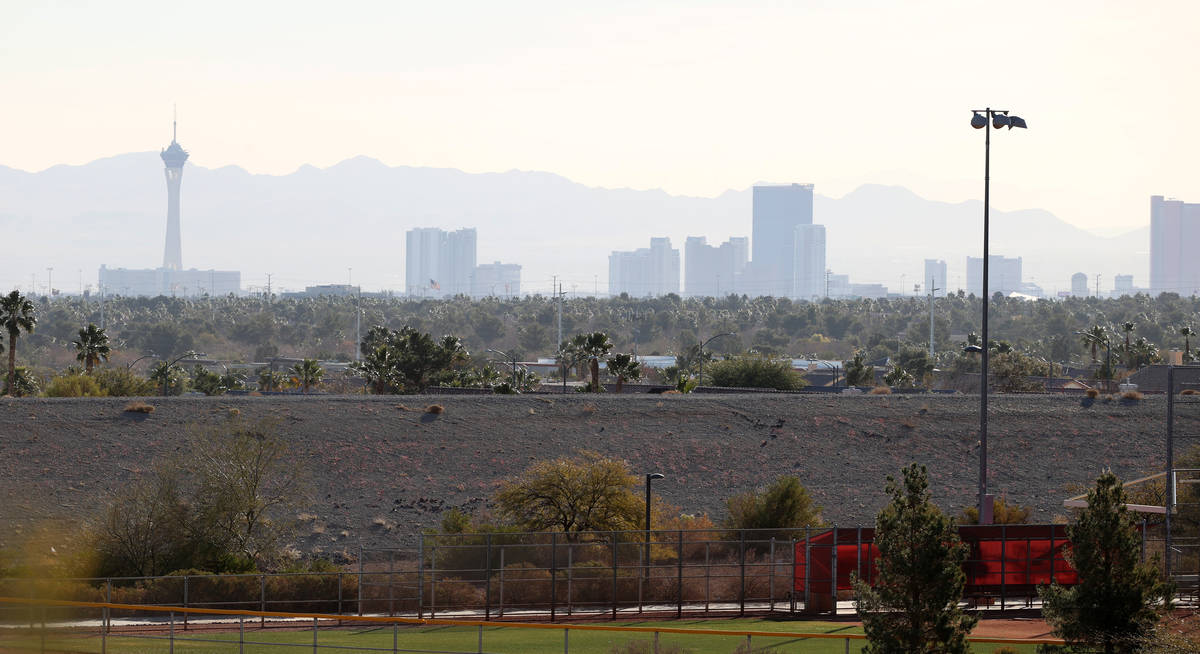 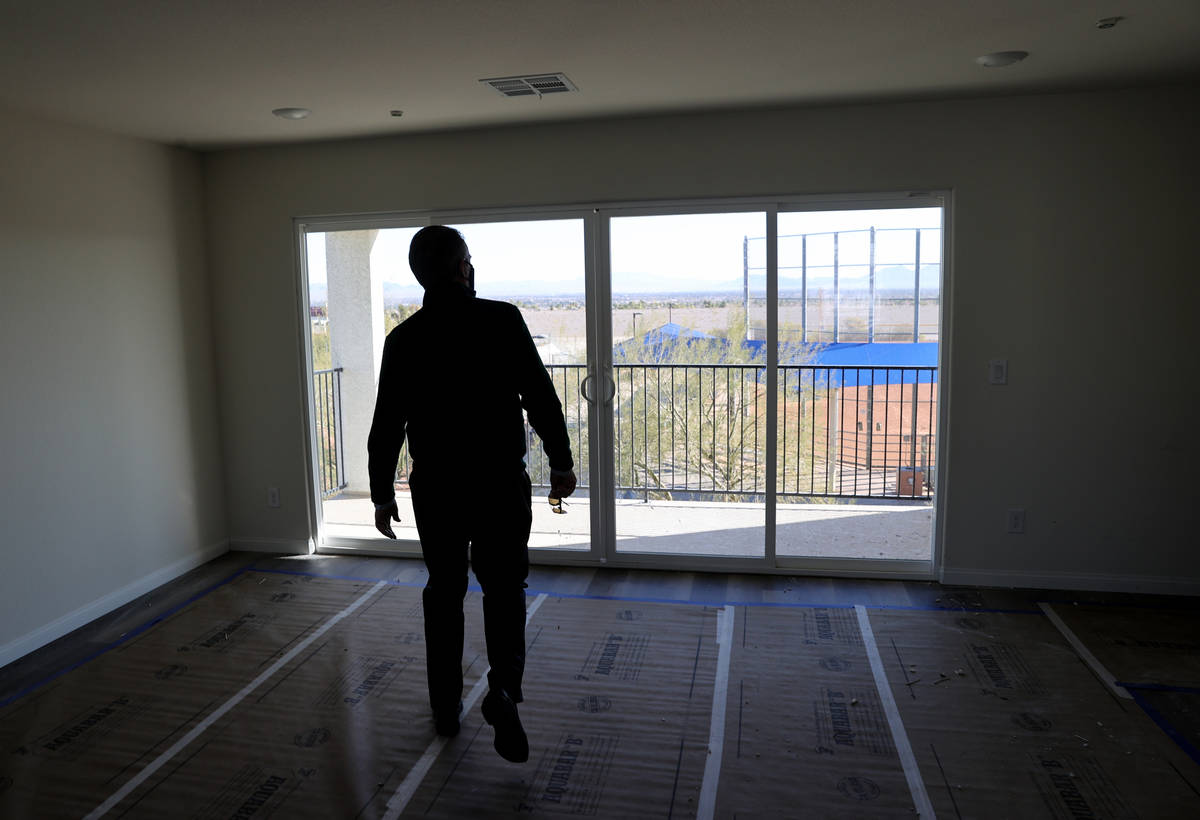 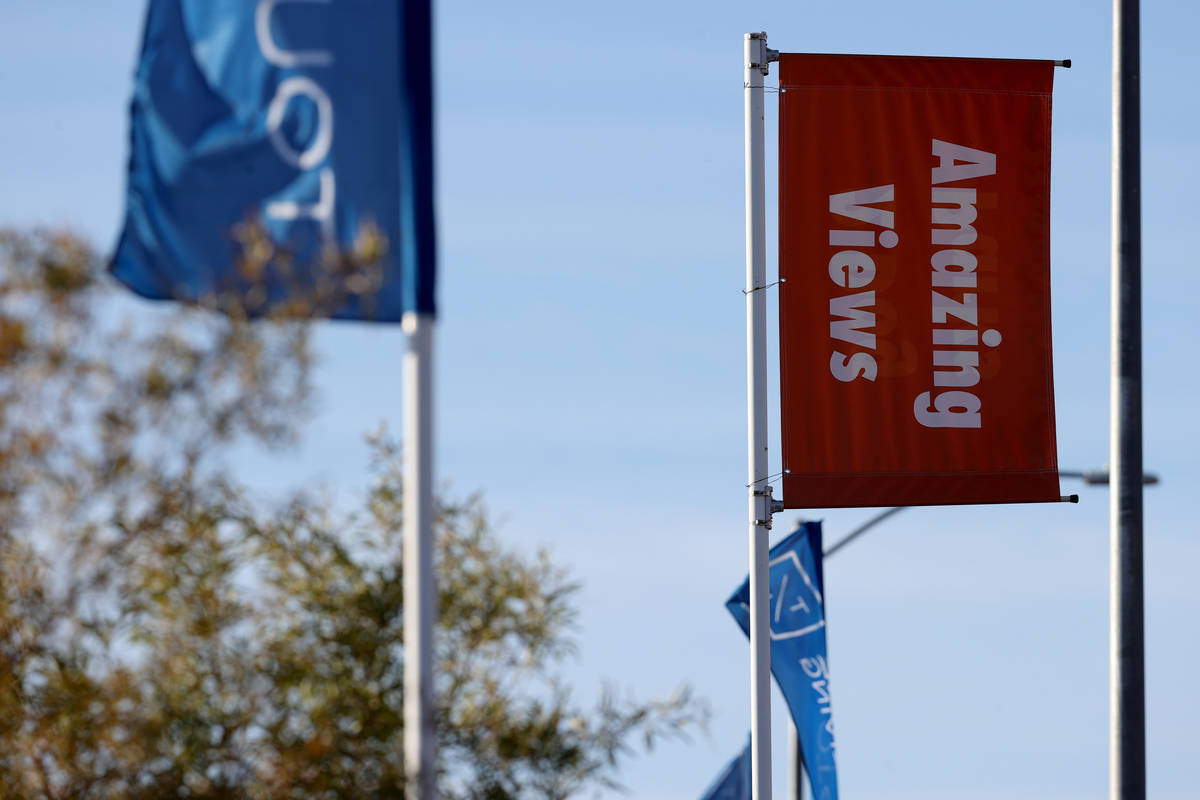 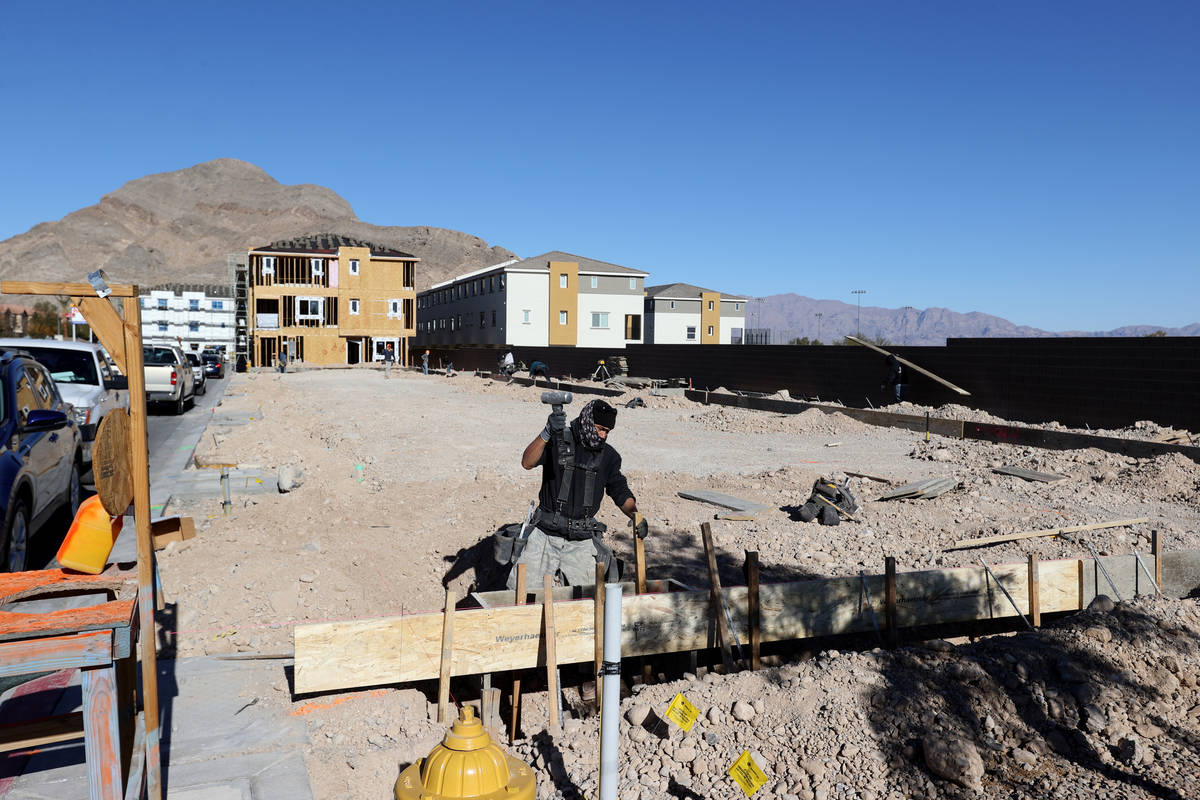 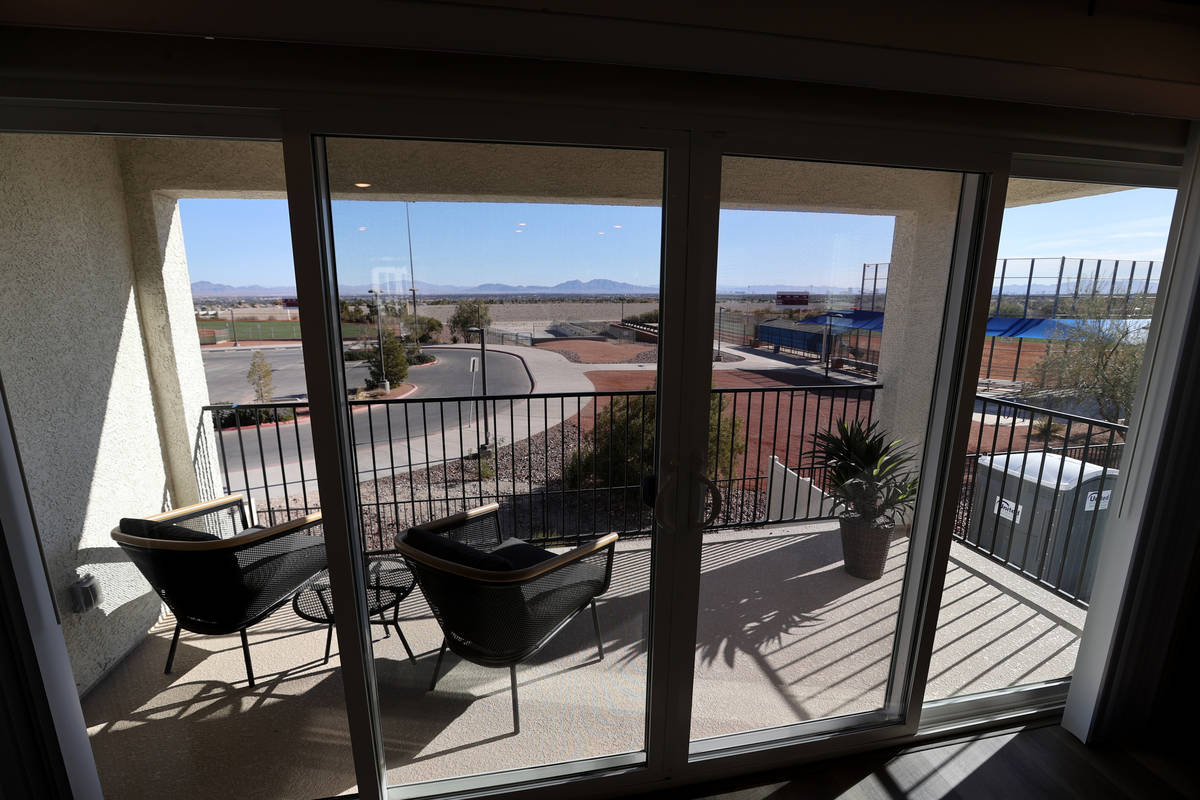 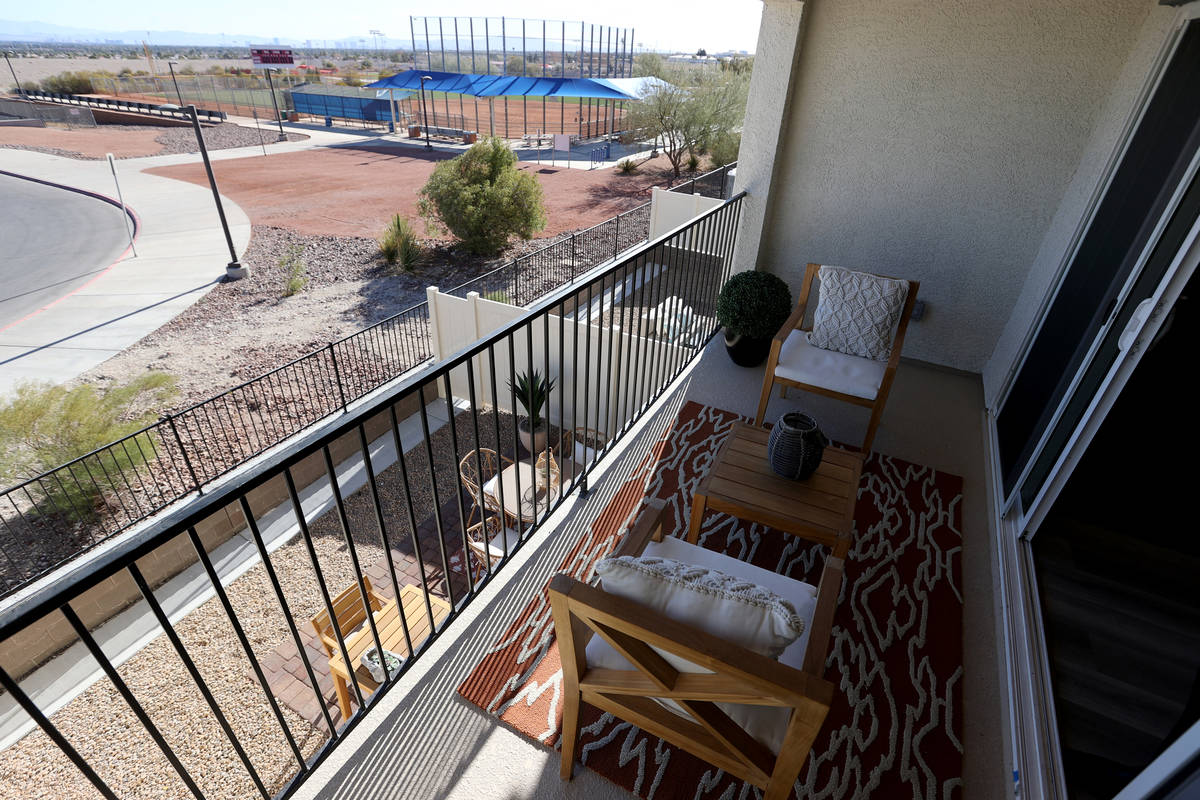 A model with a view of the Strip at Panorama housing development by Touchstone Living on North Hualapai Way near Gowan Road in Las Vegas Wednesday, Dec. 23, 2020. (K.M. Cannon/Las Vegas Review-Journal) @KMCannonPhoto 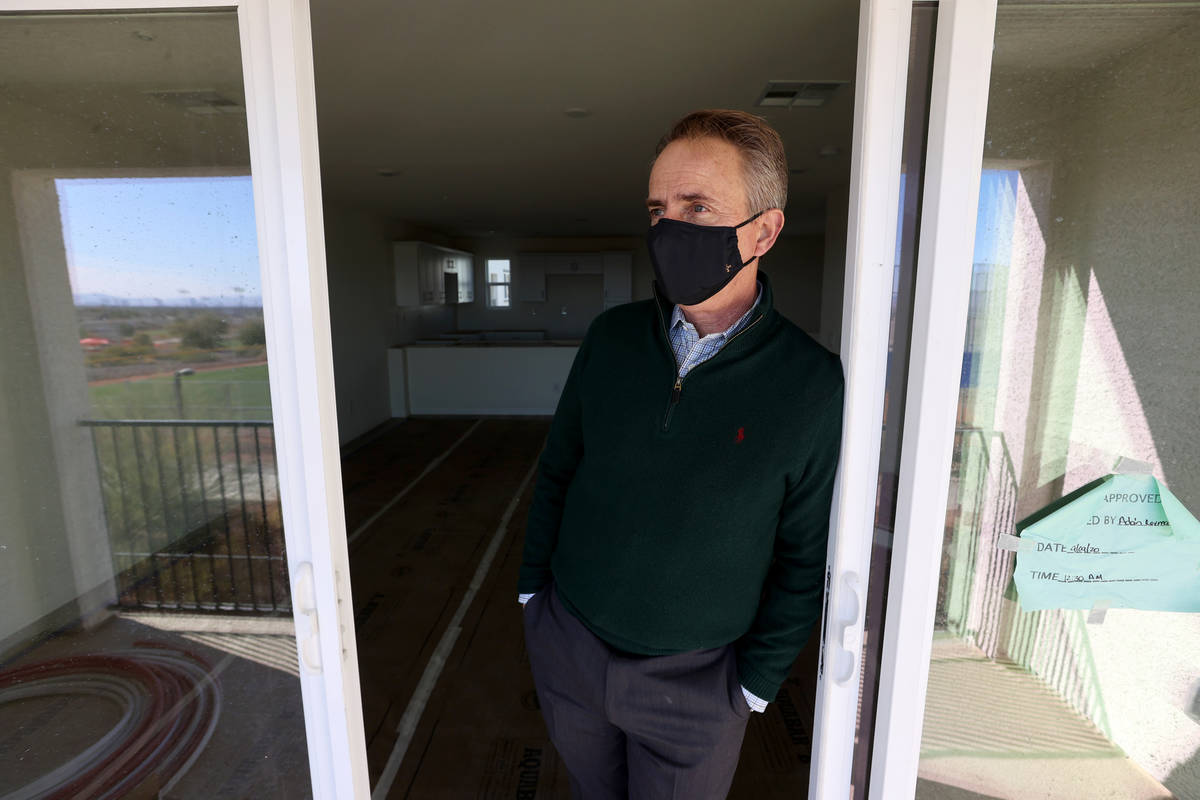 When Las Vegas rapidly shut down over fears of the new coronavirus in March, real estate broker Tom Blanchard figured the housing market “would be in a world of hurt.”

Casinos and other businesses went into state-ordered lockdown, sparking catastrophic job losses. Who could afford to buy a house, and who would want to buy one amid the chaos?

Today, the market is riding a hot streak of record prices and rising sales despite the bleak economy, thanks in large part to cheap money. And while it’s anyone’s guess how long it will take for tourism to fully recover in Las Vegas, industry experts believe the housing market will remain strong in 2021.

Analysts expect mortgage rates to stay low next year, keeping payments affordable and demand strong, though prices may not rise as fast as they did this year if more listings hit the market.

Las Vegas has also long been a popular spot for people to move from higher-priced areas, especially Southern California. Industry pros said this has accelerated during the pandemic as exiled office staffers work remotely and buy bigger, more affordable homes in Southern Nevada.

Of course, predicting Las Vegas’ housing market is never a sure bet, given its volatility even in normal circumstances. The market has not been immune from the region’s economic woes, either, as Southern Nevada has a bigger share of late mortgage payments than the U.S. at large.

But if the factors that fueled Las Vegas’ surprising housing surge stay in place, the market will buzz with activity in 2021, observers said.

Across the U.S., home sales are forecast to rise 7 to 10 percent in 2021 if the current momentum continues, said Lawrence Yun, chief economist at the National Association of Realtors.

Yun believes that mortgage rates will hover near historic lows next year, jobs will keep recovering and the low supply of available home listings could grow.

He said elderly homeowners may have opted against selling for fear of exposing themselves to the coronavirus — strangers would tour their home — but if they get vaccinated next year, they might be more willing to sell.

Daryl Fairweather, chief economist at home-listing site Redfin, also said sales totals will climb 10 percent nationally in 2021, though price growth will slow a bit. She figures that there could be more listings as people regain some certainty in their lives with the pandemic’s end possibly in sight as vaccines roll out.

Brian Gordon, a principal at Las Vegas consulting firm Applied Analysis, noted that low interest rates have given house hunters, or at least those who still have a job, more buying power by letting them lock in lower monthly payments.

Still, he said it will take time for Las Vegas’ convention and tourism industries to recover from the pandemic, and he added that the housing market and the broader economy are “moving in different directions.”

Las Vegas’ battered economy faces plenty of questions, including how long it takes for coronavirus vaccines to become widely available and for people to feel safe to travel again.

The outbreak has kept people home and away from crowds for fear of getting infected, devastating the tourism industry and threatening the foundation of the economy of Southern Nevada, a place people visit, often by airplane, to eat, drink, gamble and party with masses of others, often in close quarters and indoors.

Las Vegas’ unemployment rate, just 3.9 percent in February, shot up to 34 percent in April after Gov. Steve Sisolak ordered casinos and other Nevada businesses closed to help contain the virus’ spread. Resorts and other businesses have since reopened, but tourism levels remain down, and unemployment is still high in Las Vegas, at 11.5 percent as of November.

The economic fallout has not hit everyone the same, helping explain why home sales and prices have taken off despite huge job losses.

Fairweather, of Redfin, said service-sector workers such as waiters probably lost their jobs and are struggling to pay rent. But people who can work remotely are free to buy homes without worrying about a commute, and financially they might be on stronger footing because of stock market gains, she said.

“This hit the lower economic scale of the workers in Vegas,” he said.

Las Vegas’ housing market was initially hit with turbulence after the pandemic upended daily life, as the valley’s sales pipeline shrank rapidly. But the market recovered and is now at its most frenzied level in years.

The median sales price of previously owned single-family homes, the bulk of the market, reached an all-time high for the sixth consecutive month in November, at $345,000, Las Vegas Realtors reported.

Southern Nevada homebuilders also notched more than 10,000 net sales — newly signed sales contracts minus cancellations — this year through November, and by the end of 2020 they may end up with the most since 2007, according to Home Builders Research President Andrew Smith.

After the pandemic hit, Las Vegas homebuilder Wayne Laska initially expected about a 50 percent cancellation rate from his buyers, though only a handful or so ended up bailing on their pending sales.

Eventually, he noted, the market “took off like a rocket.”

Laska, owner of StoryBook Homes, said his firm is seeing a higher share of out-of-state buyers than usual, mostly Californians, and he figures that the market will be “very strong” next year.

But once casinos were allowed to reopen and people went back to work, “things really took off for us,” he said.

“I never would have predicted this in March,” McCormick said.

Blanchard said real estate agents have sold a lot of homes to out-of-state buyers during the pandemic, and he figures people will keep moving here next year.