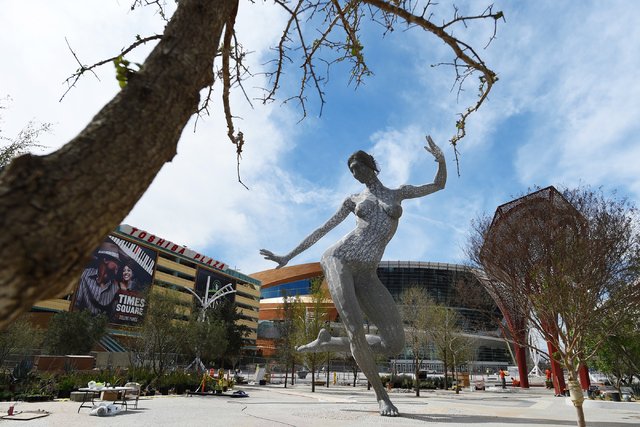 Marco Cochrane's sculpture "Bliss Dance" is seen after being installed in MGM Resorts International's new dining and entertainment district, The Park, on March 4, 2016, in Las Vegas. The 40-foot tall statue, which debuted at Burning Man in 2010, serves as a visual focal point for The Park, which is located between Monte Carlo, New York-New York and the new T-Mobile Arena. (Sam Morris/Las Vegas News Bureau)

In the Tuesday filing, MGM Growth outlined plans for its listing on the New York Stock Exchange in a registration statement. The statement explains that MGM Resorts will operate Mandalay Bay, Luxor, Excalibur, New York-New York, the Monte Carlo and the company’s new outdoor venue, The Park, north of New York-New York in Las Vegas as well as MGM Detroit, the Beau Rivage in Biloxi, Mississippi and the Gold Strike in Tunica, Mississippi, while MGM Growth will own them.

Customers and employees won’t see any difference in the day-to-day operations of the properties as a result of the new structure.

The company expects to raise $100 million in the offering, but analysts believe proceeds could be much higher.

MGM Resorts will maintain control of the REIT, which was approved last week by the Nevada Gaming Commission.