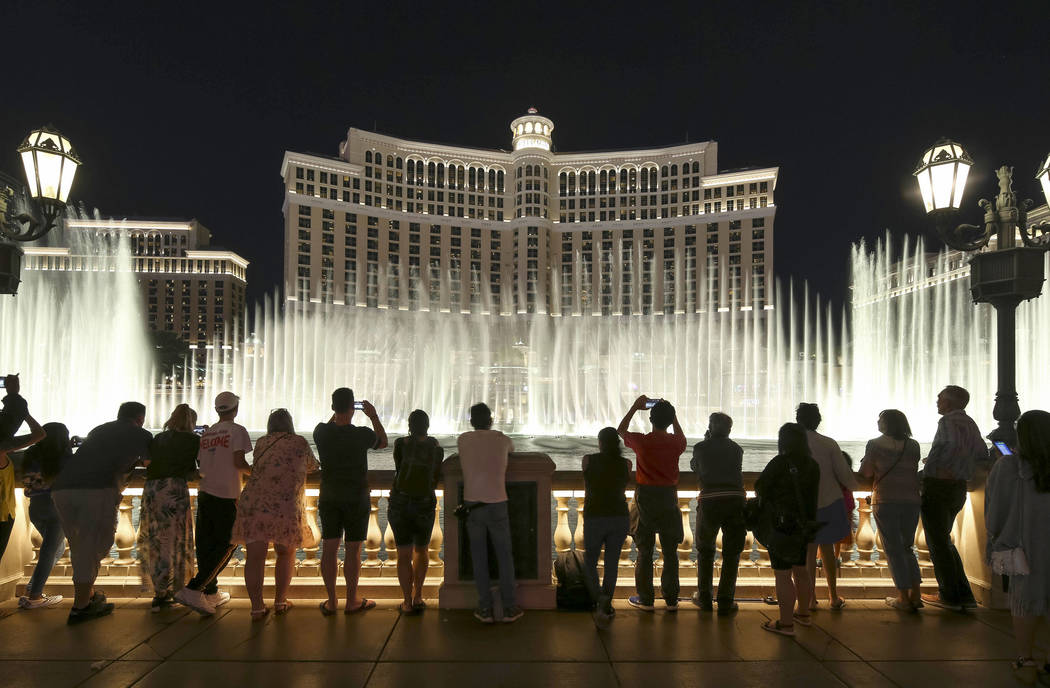 People watch the water fountain show outside the Bellagio hotel and casino on the Strip in Las Vegas. (Las Vegas Review-Journal, File)

MGM Growth Properties executives said the company is looking for more sale-leaseback opportunities, but they were mum on whether that includes the MGM Grand.

On a Tuesday morning call to investors, James Stewart, CEO of the MGM-affiliated gaming real estate investment trust, said there continues to be “a significant amount” of potential real estate transactions in the gaming industry.

“We’ve continued to actively explore transaction opportunities and have had a number of conversations with potential sellers and third-party operators,” he said.

The gaming REIT’s call comes less than a week after MGM Resorts International CEO Jim Murren told investors the company is working to monetize MGM Grand’s real estate before the end of the year.

The sale-leasebacks are part of MGM’s “asset-light” strategy, an effort to grow the company, invest in new opportunities and return more money to investors, Murren said.

One of the biggest moves in this strategy came last month, when MGM announced that it had agreed to sell the Bellagio’s real estate to The Blackstone Group for $4.2 billion. According to Stewart, that deal could boost the value of gaming real estate.

“I am convinced that the pricing premium achieved in the Bellagio transaction will cause the value of our real estate to increase as investors realize the fundamental growth, value and stability of the cash flows generated by our portfolio,” he said. “The gaming resort sector is still in the early stages of becoming a true institutional class of real estate and this transaction is another step in that progression.”

The Bellagio deal appears to have broken the record as the most expensive sale of a Las Vegas resort, selling for 17 times the annual rent of the $245 million. To compare, MGM completed a sale-leaseback of Park MGM and NoMad Las Vegas with MGM Growth in 2018 for just under 13 times the property’s annual rent.

With a higher rating for the gaming REIT sector, MGM Growth could be in a better position to compete for third-party mergers and acquisitions, according to a Tuesday note from Union Gaming analyst John DeCree.

As for future sales, Stewart said the company does not comment on specific transactions — including the potential to strike a deal with MGM Grand.

But Murren said last week that if it came down to a transaction between a third party and MGM Growth, “we’re always going to favor MGP (MGM Growth) in a close race.”

“We expect MGM’s strategic real estate review will shake something loose for MGP (MGM Growth) in the next couple of quarters since the two companies’ interests are still highly aligned,” with MGM owning about 68 percent of MGM Growth, DeCree said.