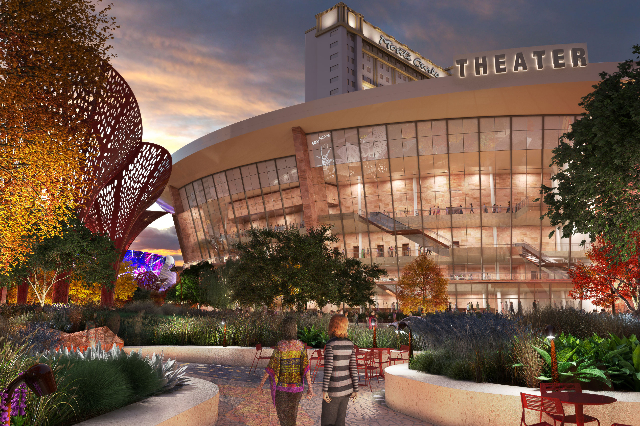 The new new 5,000-seat theater to be built at the Monte Carlo. (Courtesy/MGM Resorts) 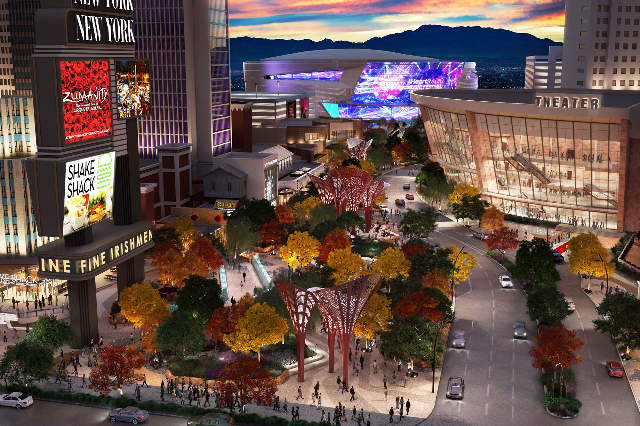 MGM Resorts International said Wednesday it will spend $100 million to build a 5,000-seat theater at the Monte Carlo, creating another entertainment attraction as part of the company‘s Park development.

The theater is expected to open at the end of 2016. MGM will move two its Strip shows ’ Blue Man Group and Jabbawockeez ’ to other properties as part of the development.

The theater is part of major investment into nongaming attractions that MGM has undertaken at its nine Strip resorts, including expanded convention space at Mandalay Bay and a 33-acre outdoor festival grounds at the north end of the Strip.

MGM is already spending $100 million on the Park, an outdoor retail, dining and entertainment area under construction between New York-New York and Monte Carlo.

The centerpiece of the development is a $350 million, 20,000-seat sports arena that MGM is building in partnership with entertainment and sports giant AEG. The arena would serve as the home for a proposed Las Vegas-based National Hockey League expansion franchise.

The Park and arena are expected to open in April 2016.

MGM Resorts President Bill Hornbuckle said the new theater would enable the company to host performers seeking a setting larger than the average showroom, but smaller than an arena. The theater size is similar to other Strip venues, such as the Colosseum at Caesars Palace and the showroom at Planet Hollywood. But the design allows the venue to have multiple uses.

"The lower section bowl will actually push back for smaller shows," Hornbuckle said. "The theater allows us to host performers who we previously haven‘t had a home for, broadening our entertainment offerings and providing the opportunity to expand those relationships to our properties around the globe."

Construction will eliminate the theater currently housing the Blue Man Group, which will move to the Luxor. The Jabbawockeez dance troupe will vacate its Luxor showroom in favor of the Blue Man Group and move to a theater at the MGM Grand Las Vegas.

Hornbuckle said the company is looking into a long-term deal with Blue Man Group.

He said the idea for the Monte Carlo theater came from visiting AEG‘s offices in the Staples Center in Los Angeles, which is part of the LA Live entertainment district along with the smaller Nokia Theater. The new Monte Carlo facility will have a outside presence from the Park, as well as entrances inside the resort.

Hornbuckle said the theater is a part of the repositioning of the Monte Carlo, which he expects will include a new name.

"We want to give the property a bigger presence and create this entertainment hub," Hornbuckle said.

The theater is being designed by Montreal-based Sceno Plus, which also developing similar theaters at MGM Resorts‘ two under-construction projects, the $1.2 billion MGM National Harbor in Maryland and $2.7 billion MGM Cotai in Macau. Hornbuckle said the similar designs could allow headliners to bring their shows to multiple venues.

MGM Resorts currently operates two arenas on the Strip, the MGM Grand Garden and the Mandalay Events Center. The company has a second festival lot across from Luxor and seven theaters housing Cirque du Soleil production shows. MGM‘s Strip resorts also have 14 showrooms for concerts, headliners and comedy performances, as well as more than two dozen lounges and nightclubs.