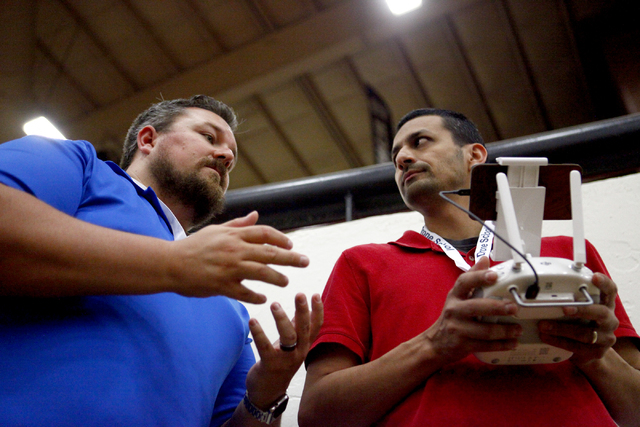 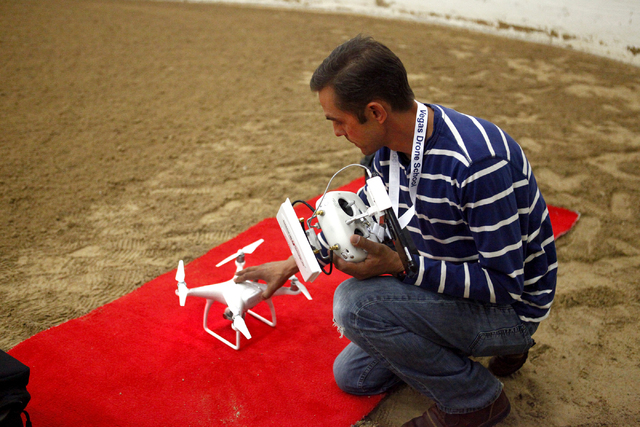 Marcus Rabinowitz, of Reno Nevada, inspects his DJI Phantom drone before flight during a during a drone pilot training course by AviSight Aerial and Drone Services at the South Point Casino on Thursday, Aug. 25, 2016. (Michael Quine/Las Vegas Review-Journal Follow @Vegas88s) 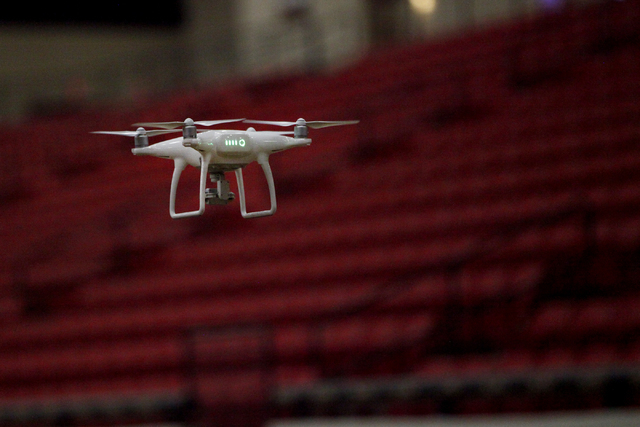 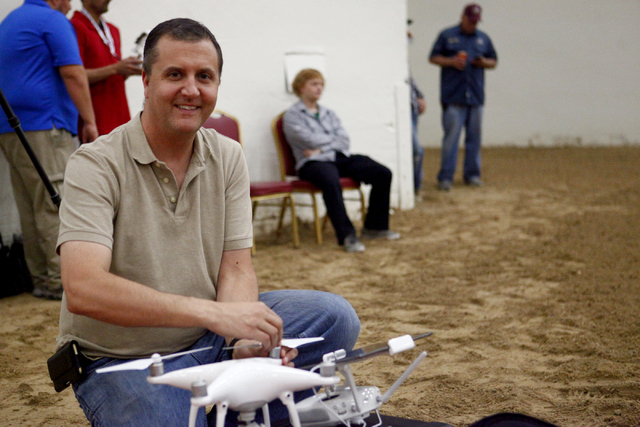 Gary Buzel, of AviSight Aerial and Drone Services, preps a DJI Phantom drone for flight during a during a drone pilot training course by AviSight at the South Point Casino on Thursday, Aug. 25, 2016. (Michael Quine/Las Vegas Review-Journal Follow @Vegas88s) 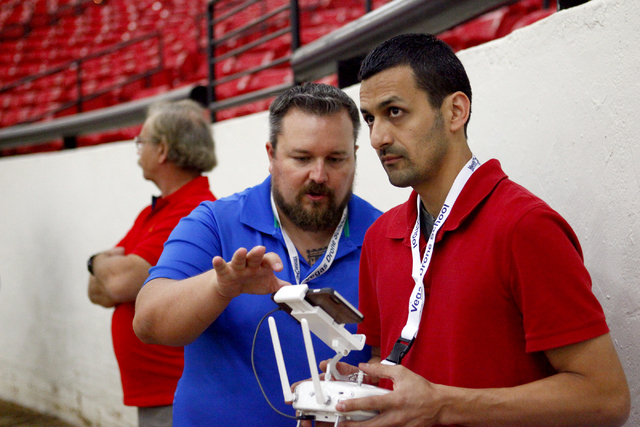 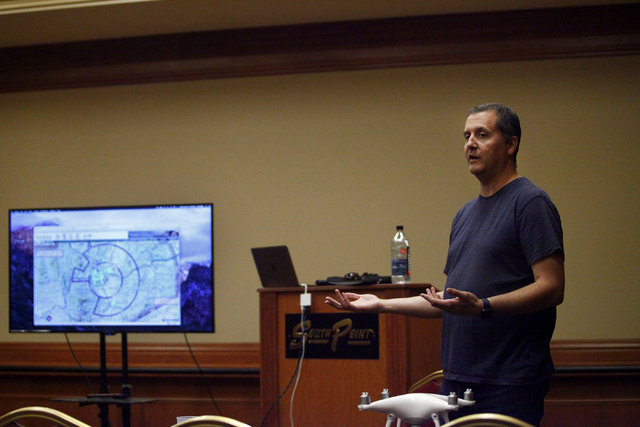 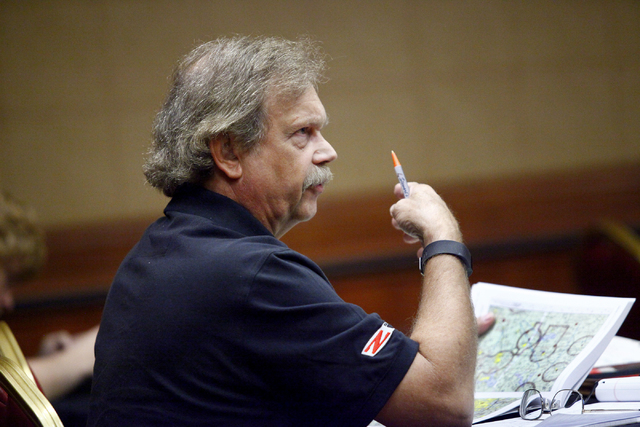 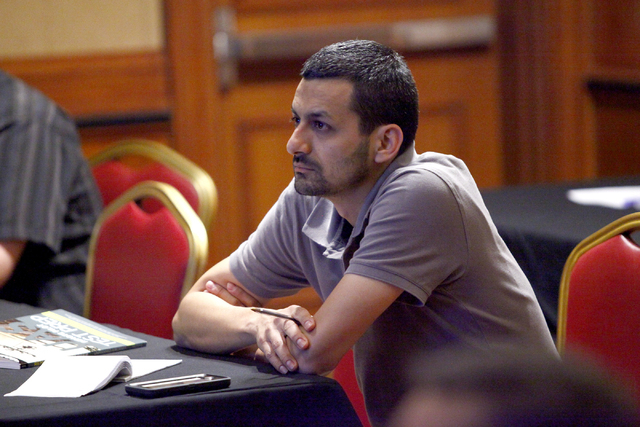 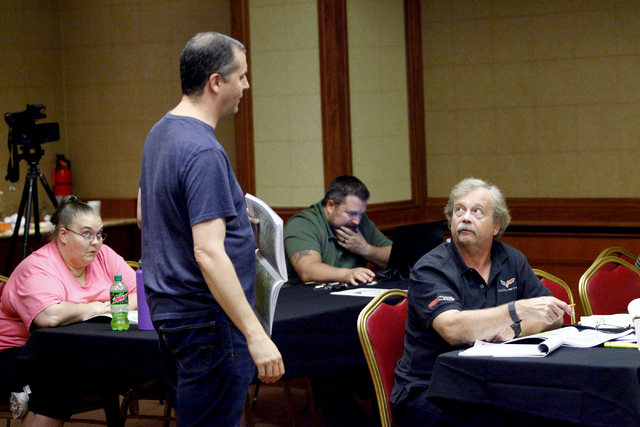 The Federal Aviation Administration completed a regulation June 21, known as the Part 107 small rules, for commercial drones weighing less than 55 pounds. Starting Monday, commercial drone operators will be able to go through a process similar to a licensing exam, instead of obtaining a pilot’s license, in order to operate a drone.

He and AviSight’s vice president of technology, William O’Donnell, told students to prepare for pushback. As commercial drone operators get approved to fly, for example, more Realtors may begin using drones to do real-estate photography and neighbors may not like or understand what drones are doing above their homes, they said.

“You, as drone pilots, you will have to do the due diligence,” O’Donnell said. “If you know you’re in the right and you’ve done everything legally and you’re flying legally and safely you might have to do the extra leg work of making sure you’re not just getting pushback because people don’t understand the laws.”

The test will not be easy, O’Donnell told the Review-Journal.

“The FAA is changing the landscape from what they have been used to for the past 60 years, with having an actual qualified pilot and the x mount of hours that you have to have to normally fly a plane,” he said.

Upon passing the knowledge test, Rabinowitz will get a certificate of successful completion of examination and then have up to one year to take that CSCE to be verified by a certified flight instructor, an FAA field office, or designated pilot examiner. After getting his CSCE verified, Rabinowitz then must submit his paperwork to a local FAA field office to get a license, which the FAA calls a remote airman certificate with a small UAS (unmanned aerial system) rating, that will be valid for two years. He and others will have to pass knowledge tests every two years in order to renew that certification.

Rabinowitz came from Reno to Las Vegas for AviSight’s four-day test prep class and said he has had no previous aviation training. He is learning how to operate a drone for his employer, a casino that he did not want to name. He plans to use the drone to take exterior photographs of the building and “maybe for some of the video art that we do,” he said.

The FAA will begin issuing the knowledge tests on Monday at six FAA-approved testing centers in Nevada.

“There are only a handful of FAA-approved testing centers here in Las Vegas so there’s going to be a backlog,” Buzel said. “We are urging our students to make their (test-taking) appointments now.”