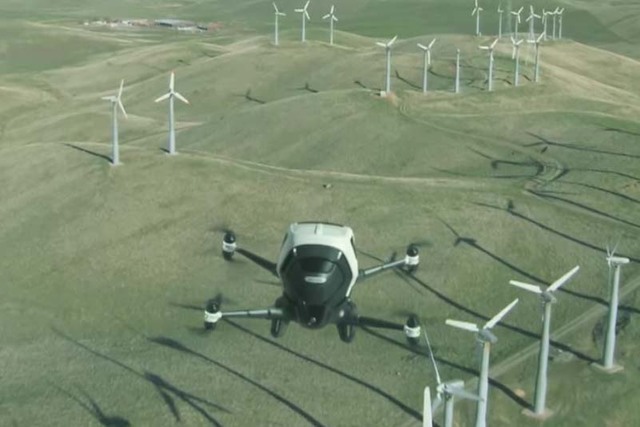 The nation’s first passenger-carrying drone manufacturing company is coming to test its system in Nevada.

EHang Inc., a company headquartered in Guangzhou, China, is developing a drone capable of carrying passengers. A passenger would enter a destination into the drone system’s accompanying smartphone app.

The Nevada Institute for Autonomous Systems, a state nonprofit group sponsored by the Governor’s Office of Economic Development, will work to help EHang test and develop its system, officials said Monday.

“We first met them at the (International) Consumer Electronics Show in 2016,” said Mark Barker, the institute’s business development director. “Tom Wilczek (the defense aerospace industry representative at the governor’s economic development office) and I were there and we went into their booth and we saw this EHang 184 — it caught everybody’s attention.”

A specific timeline for testing operations is still in the works.

EHang co-founder George Yan expressed interest in establishing a partnership with a test site and to expand their company into the United States.

“It will be a first for the state of Nevada and for the United States, once we get them qualified,” he said.

“We will help them submit necessary test results and reports to the FAA and all that kind of stuff,” Barker said. “It’s a big deal for EHang and it’s a big deal for NIAS and the state of Nevada because we will be helping them to test and validate their system.”

This partnership will advance the state’s commercial drone industry, Wilczek said in a statement.

“I personally look forward to the day when drone taxis are part of Nevada’s transportation system,” he said.

EHang expects to begin testing in Nevada later this year.

“We have several ranges where we can do it, but we haven’t firmed that up yet,” Barker said, adding that the institute will meet with EHang officials again in about a month to arrange details. “(EHang Inc. will) need a combination of restricted and unrestricted airspace, so we are trying to figure out what would be the best place to do that at.”

EHang was founded in 2014 and has raised about $52 million in venture funding to date, San Francisco-based company data-tracker CrunchBase reported.