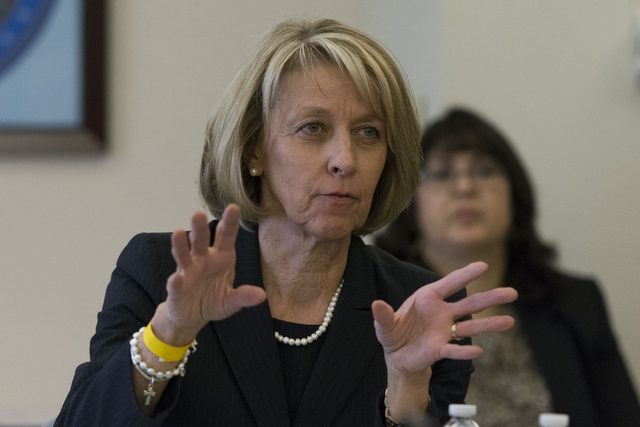 Nevada Secretary of State Barbara Cegavske, speaks with Gov. Brian Sandoval in Carson City via teleconference during a board meeting at the Governor's Office of Economic Development on March 25, 2016. (Jason Ogulnik/Las Vegas Review-Journal)

CARSON CITY — Secretary of State Barbara Cegavske did not comment Wednesday when asked how her office will respond to a letter from a U.S. Senate Finance Committee member about Nevada’s oversight of companies tied to the Panama Papers.

Kaitlin Barker, a spokeswoman for the secretary of state, instead emailed a list of Nevada statutes passed in recent years to try to tighten incorporation laws to prevent fraud and illegal activity.

Mossack Fonseca came under scrutiny following global reports of prominent people setting up tax havens. The effort was spearheaded by the International Consortium of Investigative Journalists after the law firm’s data were provided to a reporter by a source.

Corporate filings are administered by the secretary of state’s office, although laws governing their oversight are enacted by the Legislature. Nevada and states such as Delaware and Wyoming have some of the most liberal corporation laws in the nation. They do not require proof of identification when setting up a company, a task that can be accomplished in a few hours by paying only a few hundred dollars.

There’s nothing illegal about the use of limited liability companies, although they are often used by tax cheats, money launderers and other criminals who take advantage of the anonymity that these companies provide.

“I have become increasingly concerned about the use of anonymous shell companies as vehicles for terrorist financing, tax evasion, and fraud targeting major government programs within the committee’s jurisdiction, such as Medicare,” Wyden wrote to Cegavske.

In all, 1,024 entities registered in Nevada list a subsidiary of Mossack Fonseca as the registered agent. Only 185 of those have kept their filings current, the secretary of state’s office said.

Among other things, Wyden asked for information on those entities and any audits her office may have conducted. He also asked to know how many times in the past three years Nevada has demanded a list of beneficial owners if an entity is suspected of illegal activity.

“We are trying to eliminate fraudulent intent in creating and naming those officers for unlawful purposes, such as intending to defraud the public through money laundering, terrorist activities or using these entities as fronts for unlawful activities,” Scott Anderson, deputy secretary of state for commercial filings, testified during a hearing in 2013 on Senate Bill 60, which was passed by lawmakers.

“Nevada has come under significant scrutiny because these practices have been allowed to occur. We are trying to address unlawful activities. We are not telling entities they cannot hire or name officers for lawful purposes,” he said. “We are saying that they cannot name those persons for any furtherance of unlawful activity. We are going after the fraudsters and the fraud. We are not going after legitimate naming of officers for legitimate purposes.”

Sen. Tick Segerblom, D-Las Vegas, chairman of the Judiciary Committee that oversaw the legislation in 2013, said the rules were changed to give the secretary of state authority to crack down on fraudulent filings.

Those changes, along with higher filing fees, makes it more difficult for a shell corporation to come in and create 500 companies, he said.

But making further changes to expand transparency, unless other states such as Delaware do the same, would harm an important segment of Nevada’s economy, Segerblom said.

“We are known as the Delaware of the West,” he said. “We don’t want to make changes and shoot ourselves in the foot unless other states make the same changes. We worked hard on our laws and I’m proud of what we’ve been able to accomplish.”

Segerblom said he would consider improvements to the transparency of the process as long as it did not harm the state.

“SB60 did give us additional power to do things that before we kind of looked the other way,” he said. “Now if we hear something we can do something about it.”