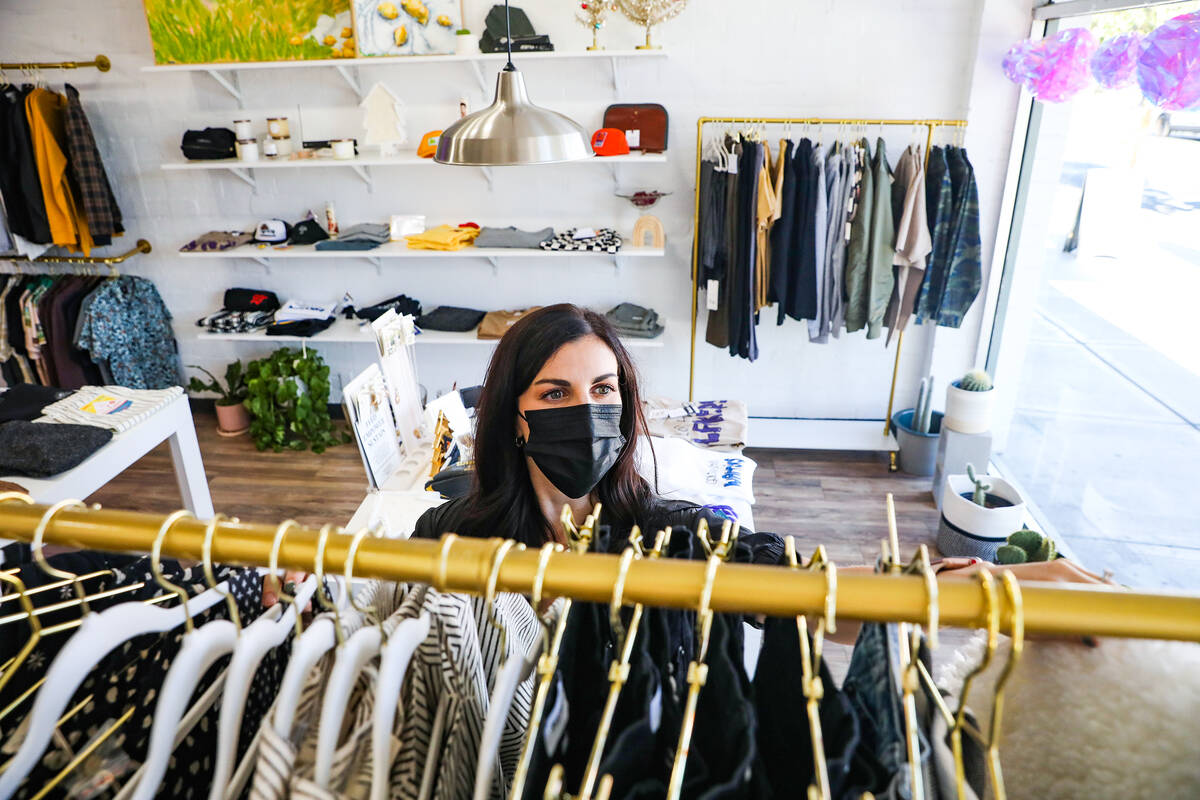 Emily Johnson, owner of the boutique clothing store For the love, LV, adjusts clothes on a rack at the store in the Arts District in Las Vegas, Monday, Nov. 22, 2021. Rachel Aston Las Vegas Review-Journal/rookie__rae 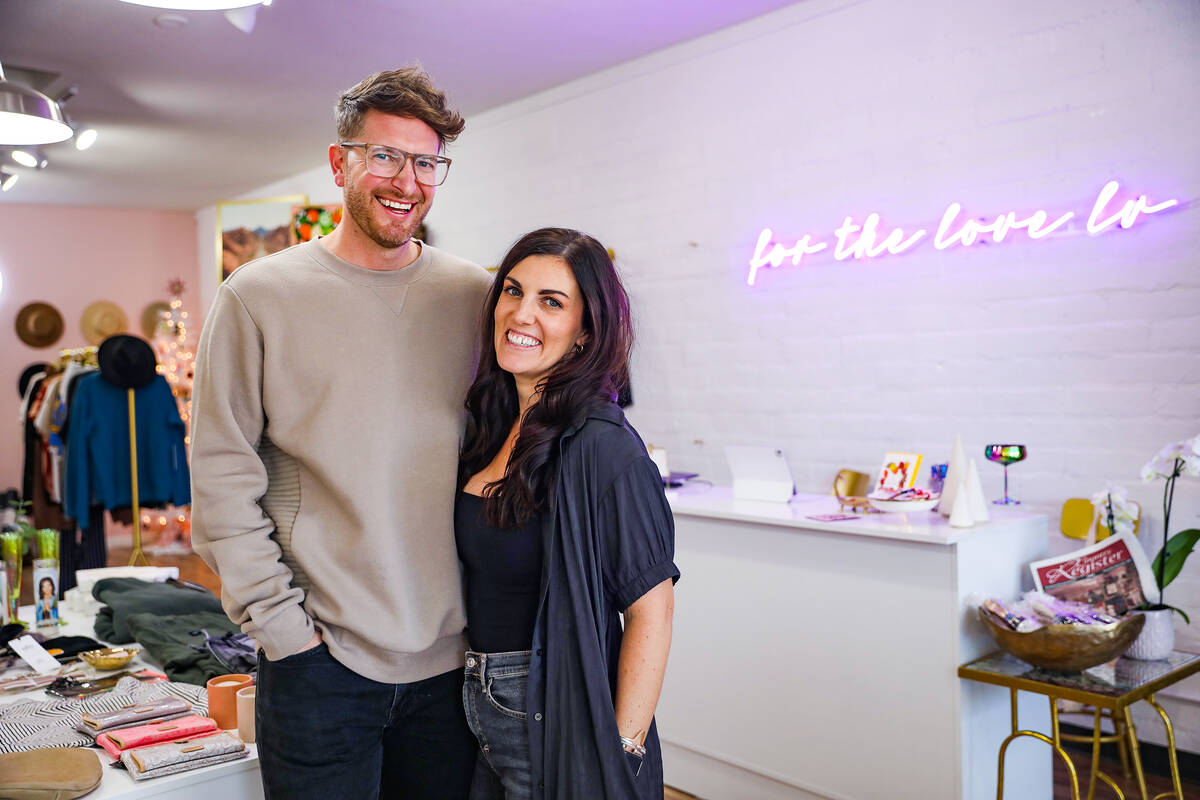 Nate Johnson and his wife Emily Johnson, owners of the boutique clothing store For the love, LV, at their store in the Arts District in Las Vegas, Monday, Nov. 22, 2021. Rachel Aston Las Vegas Review-Journal/rookie__rae 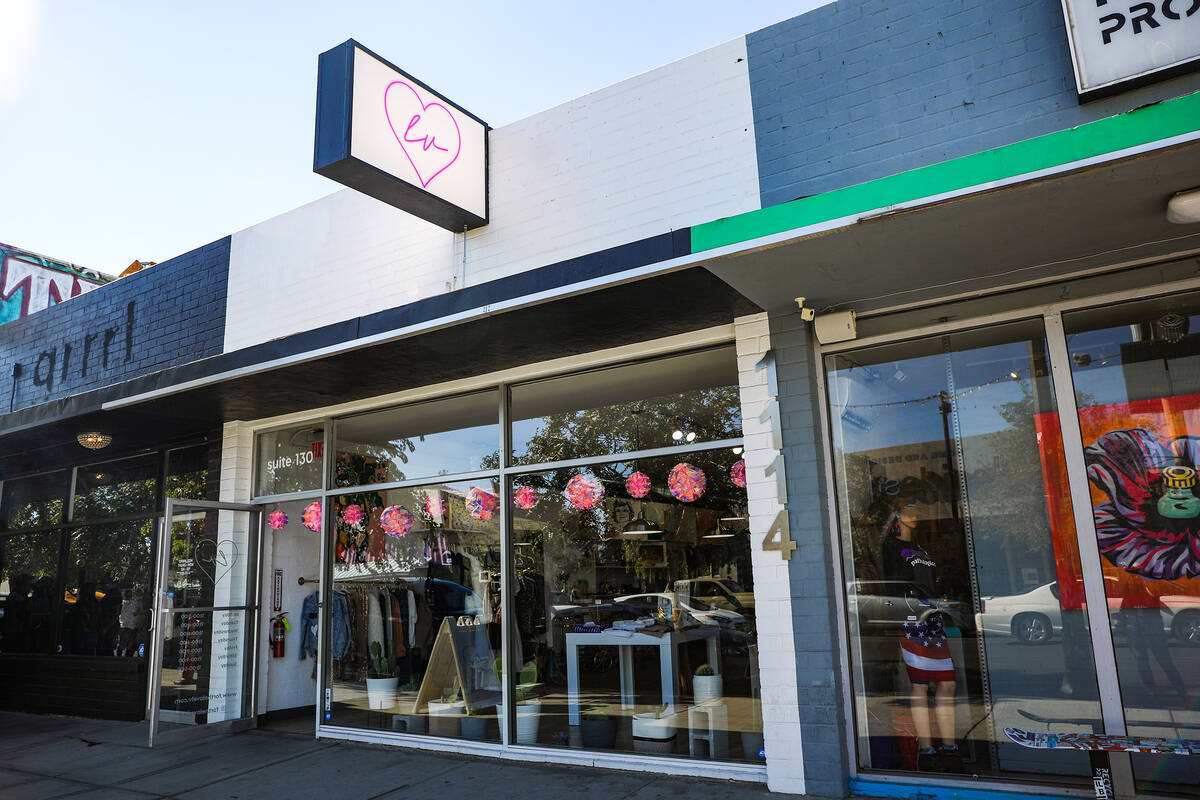 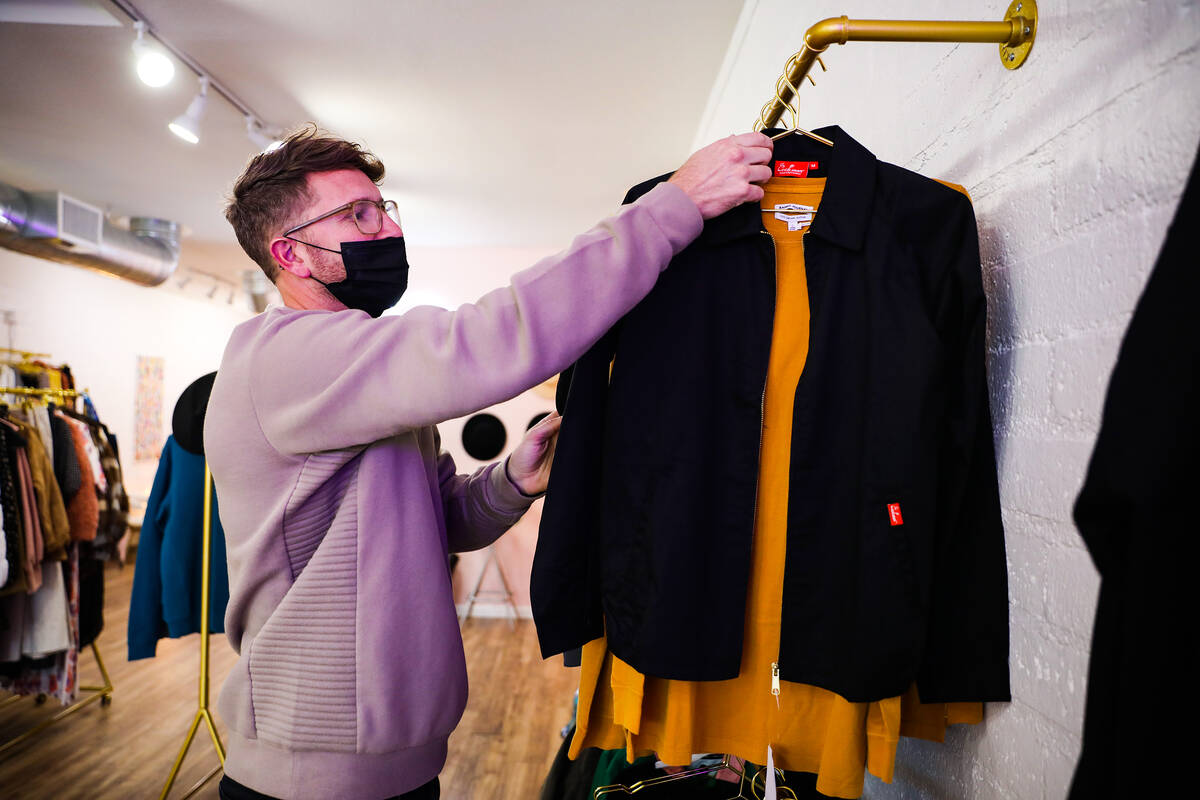 Nate Johnson, owner of the boutique clothing store For the love, LV, hangs a jacket at the store in the Arts District in Las Vegas, Monday, Nov. 22, 2021. Rachel Aston Las Vegas Review-Journal/rookie__rae 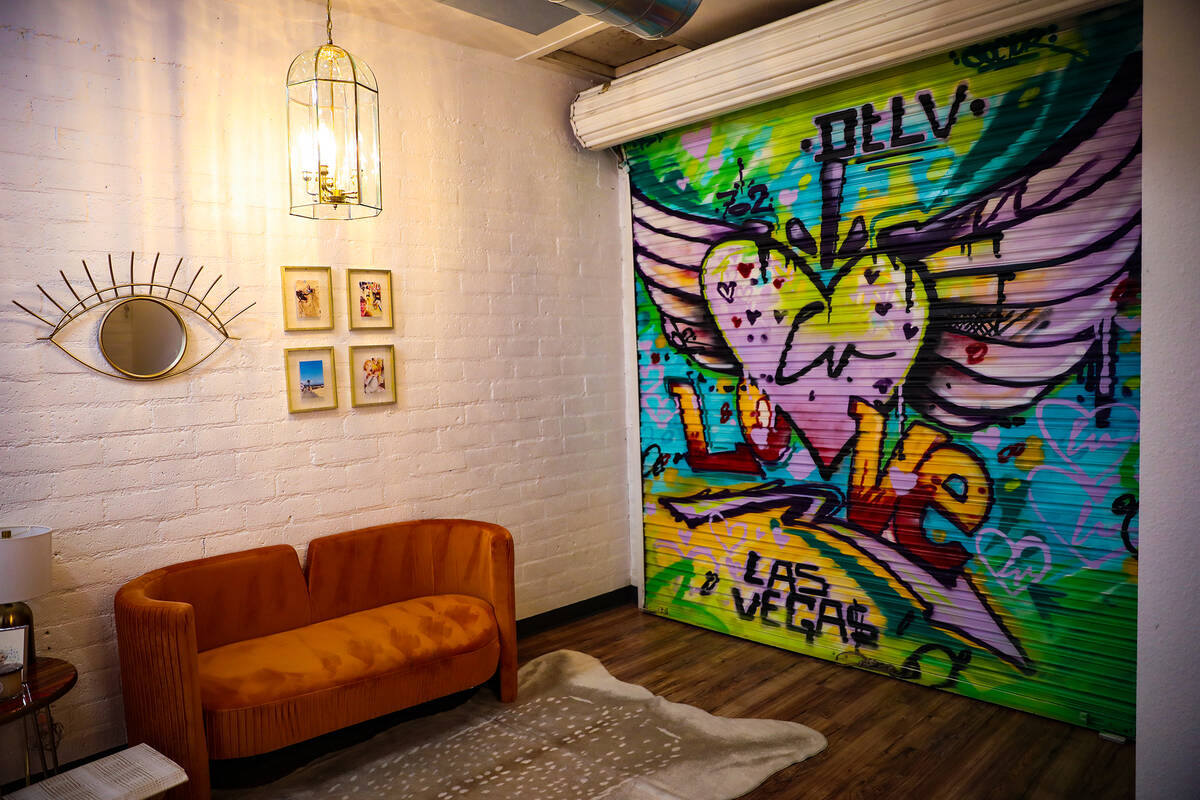 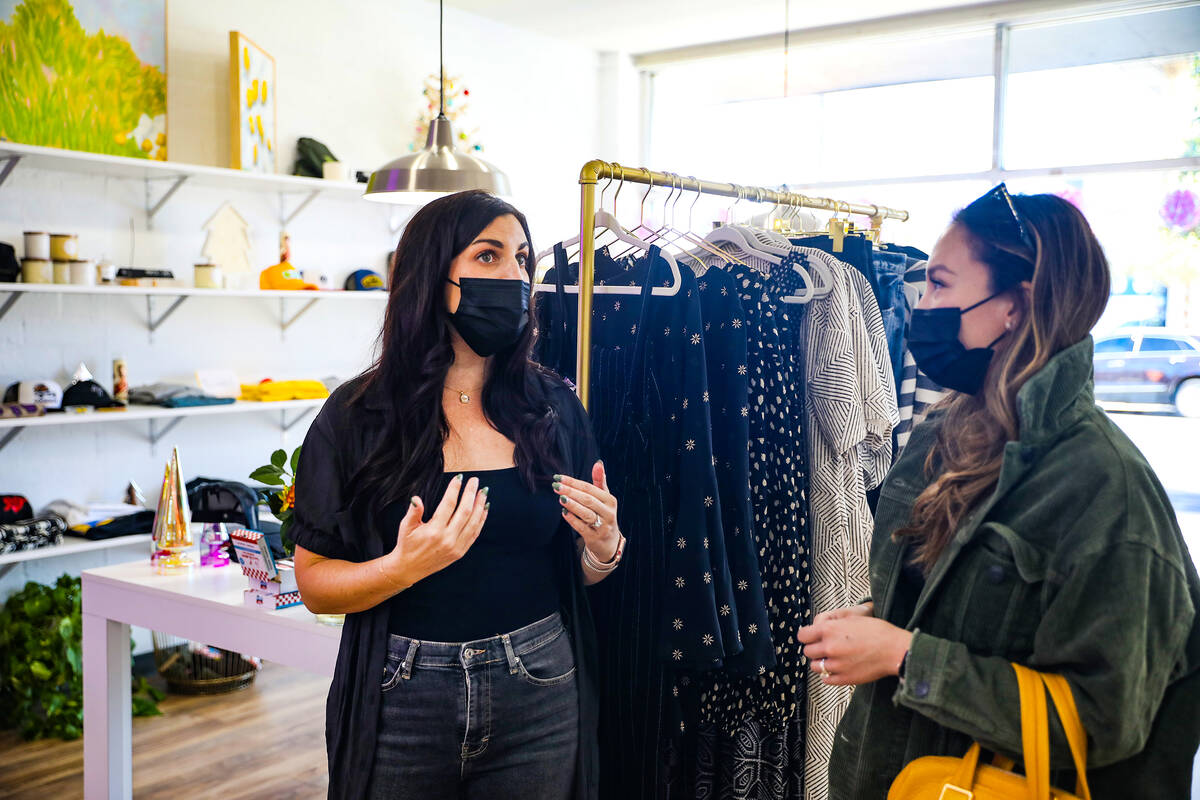 Emily Johnson said she doesn’t know what to expect for Small Business Saturday, but with a 2-month-old clothing boutique in downtown Las Vegas, she heard it’s been called “Santa Saturday.”

“This being our first Small Business Saturday, we talked to other business owners in the area,” said Johnson, owner of For the Love, LV. “They all say that it’s a wonderful day.”

Excitement is high among local businesses this holiday shopping season as many look to recover from a tumultuous year marked by temporary forced shutdowns, capacity restrictions and even watching friends — fellow entrepreneurs — have to shutter their businesses.

Jamie Schwartz, director of industry and business engagement at UNLV’s Office of Economic Development, said she also anticipates a strong turnout at Small Business Saturday, noting that the pandemic changed how many consumers viewed small businesses.

“We saw local businesses having to shut down, not able to do business, and people saw their neighbors and parents from their kid’s school out of work and suffering,” she said. “It reminded them that, ‘Hey, you don’t always have to go to Target or to Costco.’ You can actually shop with your neighbor.”

And retailers in Southern Nevada are finding shoppers and even cities are thinking local this year.

Earlier this week, the city of Las Vegas announced it would offer free on-street meter parking in downtown Las Vegas on Saturday to encourage residents to shop Small Business Saturday.

Johnson, who launched her business with her husband, Nate, said the community support is unlike previous years, adding that she owned a fitness studio more than 10 years ago in Summerlin.

“There was no push for small business like this about 11 years ago,” she said. “Vegas has developed a sense of community (with) Vegas Strong, the hockey team and now we have the Raiders. It’s been fun to watch and it’s such a positive thing.”

Johnson said she’s still offering Black Friday deals for customers at her boutique, which carries men’s and women’s clothing and accessories, but is also offering special promotions for Saturday such as a tote bag with purchase, up to 40 percent off and salsa samples from a local food vendor.

Lauren Tieru, founder of retail and event space Paige &Rye, is planning her own event, rounding up local artists and businesses at her store near South Hualapai Way and West Desert Inn Road.

“We’ve gotten a chance to work with so many great vendors this time … and one company wants to come all the way from Utah,” said Tieru. “There’ll be stuff like homemade bath salts to clothing. We have a lot of jewelry, home decor and we have a mobile bar coming.”

Tieru, who launched her business in October 2020 after a career planning corporate events, said last year she was able to draw about 50 customers during her Small Business Saturday event. She hopes to double that number this year.

Tieru was able to weather the pandemic, thanks to the small, rentable event space inside her retail shop that’s often booked for bridal and baby showers as well as other intimate gatherings and pop-up events. She’s now looking to expand the store to be able to host 50-person events, double what it can currently host.

“It’s actually been pretty crazy. We’ve been grateful,” she said, adding that her retail business has also flourished. “And during the pandemic, so many people became local makers that needed somewhere for their goods to go so it was nice to show (their) stuff here.”

Meanwhile, other events are also planned such as Shop Small in Vegas, formerly Shop Small Henderson. Held in the main parking lot of Boulder Station from 10 a.m. to 3 p.m., the free event will include free face painting and activities for kids, and an appearance from Santa and Mrs. Claus.

Despite the headwinds many local businesses face with supply chain disruptions and rising business costs, Southern Nevada is still seeing a burst of new businesses.

The number of Clark County business applications in 2020 jumped 27.2 percent to 42,474 compared with the applications filed in 2019, according to the U.S. Census Bureau. It’s the highest number of applications since 2005.

“For the most part, local businesses keep that money in the local economy so the effect for us is much greater than buying something through a nationwide chain store where only a fraction of it stays local,” she said.

Kappa Toys founder Lizzy Newsome said she’s been part of Small Business Saturday almost from the beginning. American Express launched the event in 2010 in response to the Great Recession, and it quickly grew in popularity across the country.

“Up until recently, so much of the conversation around Black Friday and holiday shopping is about mass retail and waiting around at 3 a.m. for a cheap TV,” said Newsome. “But that’s not the retail that creates a sense of community.”

Newsome has been preparing for not only Small Business Saturday but also the rest of the holiday shopping season. Her toy store is located inside Fashion Show, and she has a second outpost, which opened in May at Area 15, that she says’ is the world’s first all glow-in-the-dark toy store.

“We’ve been busy since this summer, but now people are coming in and are like, ‘Oh, you have what I need. I’m just going to get all of my toy shopping done,’” she said. “Customers have been so thrilled to find the product they’re looking for at our store when you can’t even find it at the mass retailers.”