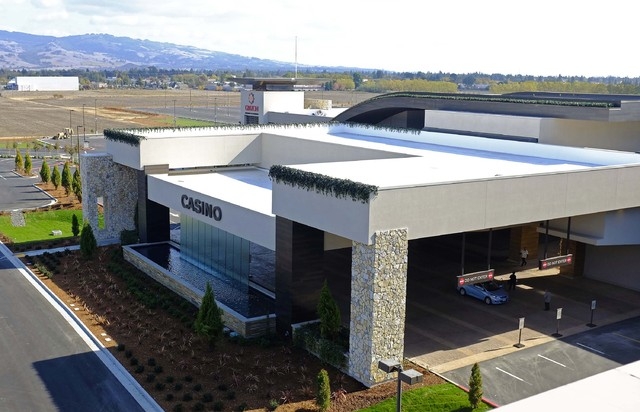 The Graton Resort and Casino in Rohnert Park, Calif., opens Tuesday. The $800 million casino, which is owned by the Federated Indians of Graton Rancheria, is located about 45 minutes north of San Francisco. (AP Photo/Eric Risberg) 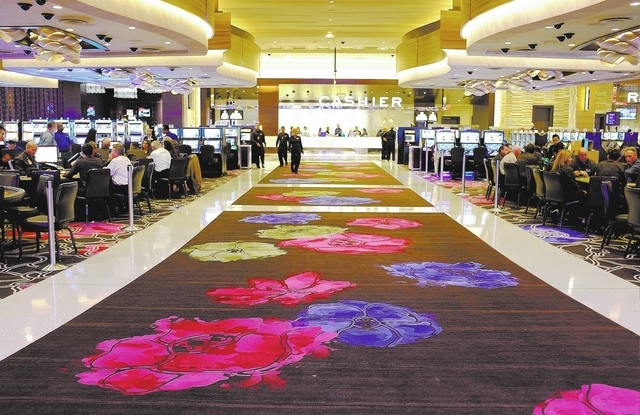 In this Tuesday, Oct. 29, 2013 photo, patterns inspired by Sonoma County flowers are shown on a custom-woven carpet inside the Graton Resort and Casino in Rohnert Park, Calif. The Las Vegas-style Indian casino is set to open in California's wine country, the culmination of years of planning and legal battles. The $800 million casino opens November 5 and features four full-service restaurants, nine casual dining choices and three lounges in the 340,000 square foot resort. (AP Photo/Eric Risberg) 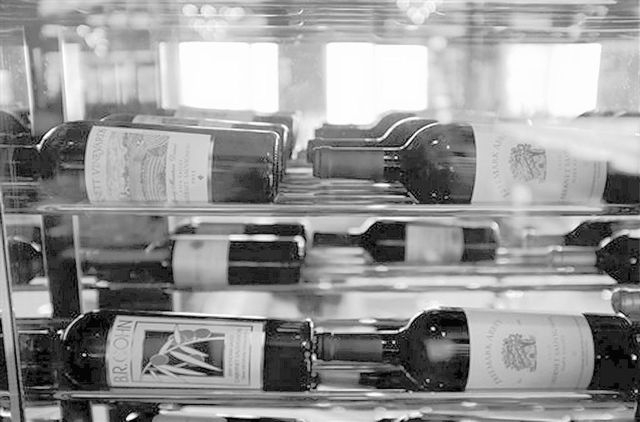 In this Tuesday, Oct. 29, 2013 photo, bottles of California wine are displayed inside the 630 Park Steakhouse at the Graton Resort and Casino in Rohnert Park, Calif. The Las Vegas-style Indian casino is set to open in California's wine country, the culmination of years of planning and legal battles. The $800 million casino opens November 5 and features four full-service restaurants, nine casual dining choices and three lounges in the 340,000 square foot resort. (AP Photo/Eric Risberg) 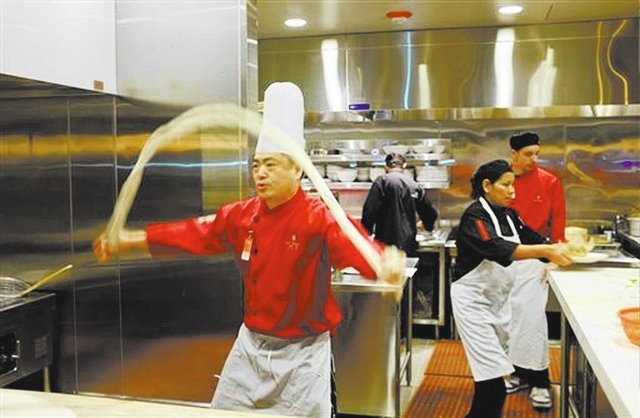 In this Tuesday, Oct. 29, 2013 photo, a chef hand pulls noodles in the kitchen of the M.Y. China restaurant at the Graton Resort and Casino in Rohnert Park, Calif. The Las Vegas-style Indian casino is set to open in California's wine country, the culmination of years of planning and legal battles. The $800 million casino opens November 5 and features four full-service restaurants, nine casual dining choices and three lounges in the 340,000 square foot resort. (AP Photo/Eric Risberg)

Station Casinos and the tribal owners of an $800 million Northern California casino decided a 13-year wait was long enough.

So, with crowds building for Tuesday’s planned 10 a.m. public opening of the Graton Resort &Casino, the property was opened an hour early.

The Graton Resort, owned by the Federated Indians of Graton Rancheria, is in the Sonoma County city of Rohnert Park, roughly 48 miles north of San Francisco.

Station Casinos developed the resort and will manage the property for the tribe under a seven-year contract.

“For those who have already toured the facility, there has been nothing short of jaw-dropping amazement,” Graton general manager Joe Hasson said Monday, following a week of practice runs for employees and an invitation-only event Saturday night.

Hasson managed Station Casinos’ properties in Las Vegas, most notably the Green Valley Ranch Resort when it was featured in the reality television series “American Casino.” Hasson oversaw the Aliante Casino’s opening in 2008. Casino openings are similar types of events in any market, even picturesque Sonoma County, he said.

“Keep in mind that Sonoma County has long been a visitor destination,” Hasson said. “This now creates another reason for someone to visit to Sonoma.”

The Graton Resort has been planned since the tribe had its federal recognition restored by Congress in 2000. Since then, the tribe gained state and federal approvals for the casino, which will have 144 table games and 3,000 slot machines, along with an 18-table poker room, a high-limit room with private gaming salons and a high-limit slot machine area.

The tribe signed a compact with the state of California in 2012.

Graton customers who sign up with the casino’s rewards program will be allowed to redeem their points at any Station Casinos property in Las Vegas, marking the first time the company has offered that type of benefit.

Graton will also include four full-service restaurants, including a Chinese restaurant run by celebrity chef Martin Yan, and a branch of Tony’s Pizza Napoletana of San Francisco. Nine restaurants will be offered a 500-seat food court, dubbed The Marketplace.

Hasson said having a variety of dining options gives visitors additional reasons to return. Graton will also feature a 9,000-square-foot events center that could host concerts and private special events.

But Graton won’t have a hotel. The property was master-planned for future expansion, but adding a hotel will be up to the tribe. So far, Hasson has secured rooms at neighboring hotels to house customers.

Hasson said properties he managed in Lake Tahoe before he joined Station Casinos drew customers from the Bay Area.

“I’m excited to be reunited with those guests once again,” Hasson said. “All the brand names — Hyatt, DoubleTree, Hampton, Sheraton, Hyatt — are all near us. It’s a terrific market.”

California is the nation’s largest Indian gaming market. In the 2011, the state’s 68 casinos produced almost $6.91 billion in revenues, one-quarter of the nation’s total for tribal gaming, according to the Casino City’s Indian Gaming Report.

A study of the Graton Resort’s financial potential, which the Santa Rosa Press Democrat obtained over the weekend, said the property was expected to bring in annual revenues of $533 million.

Station Casinos wouldn’t comment on the report. But company officials have said in the past that Graton’s proximity to the populous Bay Area and its location off U.S. Highway 101 will make the casino a lucrative venture.

Graton is 30 miles south of River Rock Casino, also in Sonoma County. There also are several large Indian casinos in the Sacramento region.

Station Casinos opened the Thunder Valley Casino near Sacramento in 2003 and ran the property until 2010.

Station Casinos has a development agreement and management contract to build and operate a casino in central California, roughly 25 miles north of Fresno, for the North Fork Rancheria of Mono Indians.