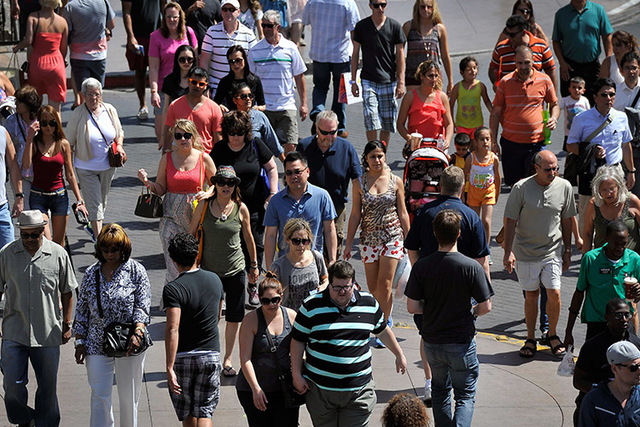 The city is on pace for a record year, 2.6 percent of 2015’s pace for the first four months of the year. At the end of April, the authority reported 14.1 million visitors.

Visitor volume was boosted by a 14.9 percent increase in convention attendance to 575,981 for the month.

The city is working with 1.3 percent fewer rooms in its inventory than it did a year ago thanks to the May 2015 closure of the Riviera, resulting in a reduction of about 2,000 rooms.

Visitor volume was flat compared with last year, in part because the Easter holiday fell in March this year but in April in 2015.

Although the number of passengers at McCarran International Airport was up 3.4 percent to 3.9 million, the amount of traffic on Interstate 15 from California dropped 7.1 percent, according to the Nevada Transportation Department.

Mesquite and Laughlin, which also are monitored by the authority, had good months in April.

Occupancy rates were up 4 percentage points in both cities, 88.5 percent in Mesquite and 69.4 percent in Laughlin.