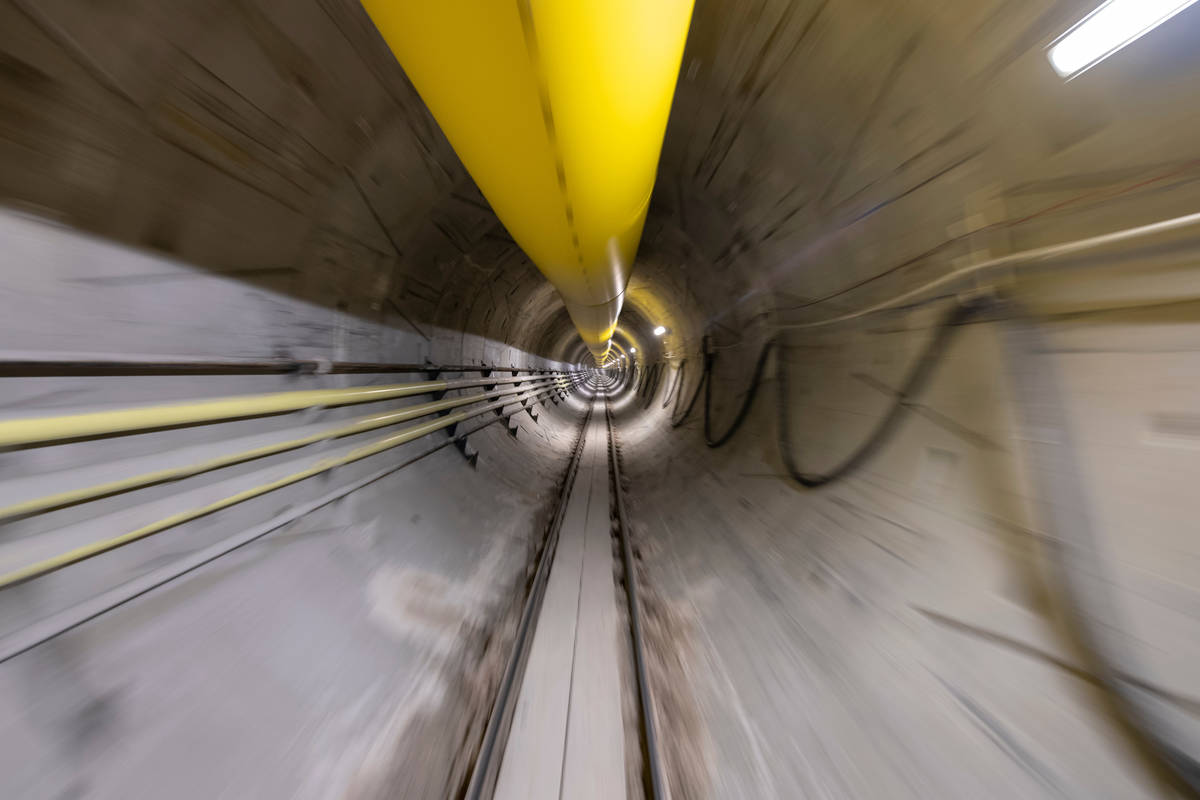 The company building the $52.5 million underground transit system at the Las Vegas Convention Center is seeking the permits necessary to extend its tunneling network throughout the city’s tourism corridor.

The Boring Co.’s Vegas Loop project, as it is called, could link about 50 stations from the Fremont Street Experience and Circa’s Garage Mahal to as far south as Allegiant Stadium. A spur to McCarran International Airport’s terminals also is contemplated.

Las Vegas Convention and Visitors Authority President and CEO Steve Hill said Tuesday that the Boring Co., Elon Musk’s tunnel-drilling transit system using electric Tesla vehicles operated in self-driving mode, had submitted a special use permit application to the city and is on the verge of submitting a land use design review to Clark County.

Hill did not disclose any cost estimates for the first-of-its-kind system but said resort companies across the city are supportive of the Vegas Loop concept. The concept envisioned by the Boring Co. would involve construction of about 15 miles of tunnels in both directions.

Under plans discussed by Boring and the LVCVA months ago, the company would build the transit system at its own expense but keep all farebox and advertising revenue the system would generate. Potential fares have not been discussed.

Boring would negotiate with resorts and attractions for the construction of stations.

“The Vegas Loop will be a game-changer for our visitors to quickly access world-class attractions and resorts throughout the destination in a fun and convenient way,” Hill said in a release issued Tuesday by the LVCVA.

“We are very excited about the future of Loop transportation in Las Vegas and are grateful for the enthusiasm shown by Clark County, the city of Las Vegas, the LVCVA, the resorts and attractions,” Boring Co. President Steve Davis said.

Davis and Hill have said in the past that a citywide transit system similar to the one being built at the Convention Center was a possibility and that it probably would be built and operated as a commercial venture by the Boring Co.

The LVCVA, as the prospective owner of the Las Vegas Monorail Co., could waive a noncompete agreement that would enable Boring to build and operate a competitive transit system on the east side of the Strip.

One of the advantages of the Boring Co.’s concept is that all transit would be point to point, with no stops at various stations as is the case with traditional subway systems. The Vegas Loop would function as an underground ride-hailing system, with passengers being whisked directly to their destinations.

Hill did not discuss what types of negotiations have occurred between the Boring Co. and various resorts, other than to say resort companies have been extremely supportive of the concept.

Hill said the concept map shows a potential spur to McCarran’s Terminal 1 and Terminal 3 beneath Tropicana Avenue and Paradise Road, but he said an exact route to the terminals has not yet been developed because it will require additional permission from other agencies.

The first sign that the Vegas Loop concept was under consideration came earlier this week, when a proposal for approval of a station was listed on the Las Vegas Stadium Authority’s meeting agenda for Thursday. The authority, which has taken ownership of the stadium from the Las Vegas Raiders as ordered by Senate Bill 1, would have to approve Boring’s placement of a station at the stadium. The developer said he hoped to have tunnels built in time for the 2021 football season.

The Boring Co.’s first commercial underground tunneling effort occurred at the Convention Center Loop, a 1-mile system of three stations connecting various points of the Convention Center campus, including the LVCVA’s $980 million west hall expansion, which is due for completion by Dec. 14.

The Convention Center system is nearly completed, but the cars, including Tesla vehicles capable of carrying up to 16 passengers, have not been delivered. Once they are, they will be thoroughly tested before the system is turned over to the LVCVA, which intends to operate them at no charge to conventioneers.

Musk’s underground transit concept came out of his desire to alleviate traffic congestion and avoid gridlock. Building underground has several advantages, as tunnels are structurally safe, weatherproof and noise-free and can meet growing capacity by adding multiple levels.

The first Boring Co. tunnel was built in Hawthorne, California, near the headquarters of another Musk company, SpaceX.

One of the Boring Co.’s biggest critics, Las Vegas Mayor Carolyn Goodman, an LVCVA board member, remains skeptical that the system will work as advertised.

“Las Vegas is a chameleon, always open to change and innovation, so it is little wonder that the Boring Co. and Elon Musk have found Southern Nevada attractive,” Goodman said Tuesday.

“Already nearing completion for its very first operational public transport system in the country, we are excited to see how it proves itself handling the masses of conventiongoers moving through the LVCVA campus before validating its effectiveness,” she said.