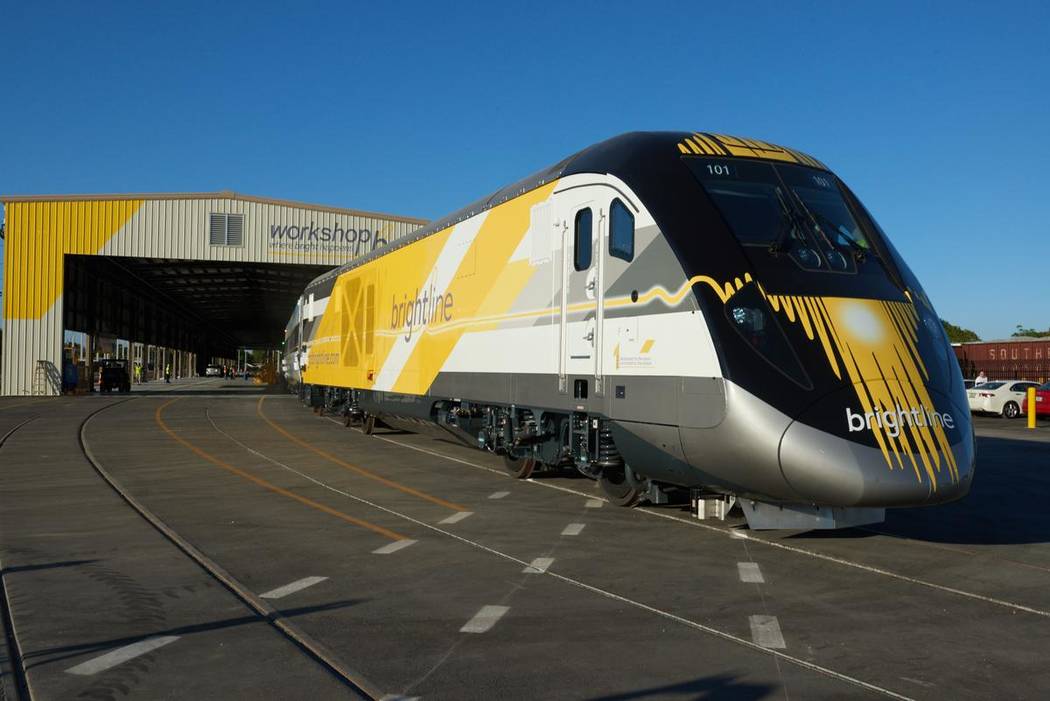 XpressWest, the high-speed rail proposal to link Las Vegas with Los Angeles via Victorville, California, has been acquired by a company that provides rail service in Florida.

Brightline, a privately owned and operated intercity passenger rail system serving Miami, Fort Lauderdale and West Palm Beach, on Tuesday announced plans to take over the rights to XpressWest’s 185-mile federally approved rail corridor along Interstate 15. Brightline indicated it would begin building the $7 billion rail line next year with completion of a link between Victorville and Las Vegas by 2022.

The company has not explained the financing of the California-Nevada project, but Brightline appears well positioned to fund it.

Brightline is acquiring XpressWest from the Marnell Companies and appears to be following the strategy the company had when it began developing the train project in 2005 as DesertXpress.

Under the plan developed by Marnell Companies, a dual-track line free of grade crossings would be built between Las Vegas and Victorville. The company then planned to build a 60-mile link west between Victorville and Palmdale, California, where the line would meet with Southern California’s Metrolink commuter rail lines and the California High Speed Rail line that is under construction.

Fortress bought the parent company of the Florida East Coast Railway for $3.5 billion in 2007 and has capitalized on real-estate transactions around areas where train stations are being built in South Florida.

Tina Quigley, general manager of the Regional Transportation Commission of Southern Nevada and a member of the Nevada High-Speed Rail Authority, said she is enthusiastic with the news about Brightline.

“This is absolutely huge,” Quigley said by telephone.

“From the RTC’s perspective, any alternative mode of transportation we can offer is great for tourism and economic development,” she said.

Quigley said she had heard months ago that XpressWest was in talks with Brightline, but was surprised at how quickly the deal came together.

A spokesman for Brightline said Edens first met Marnell in 2011, building the relationship over time.

In a release issued Tuesday, Brightline indicated it would acquire 38 acres adjacent to the Las Vegas Strip to build an intermodal transportation station with access for taxis, buses, shuttles, and limousines. The company did not disclose the location of the planned station.

In a release from Brightline, Gov. Brian Sandoval said the company “will bring significant economic and environmental benefits to our state and support increased tourism.”

Representatives of Brightline have indicated they expect they could complete the project for less than the projected $7 billion estimated thanks to their prior experience and existing relationships with suppliers, including Sacramento, California-based Siemens USA for track and train sets.

XpressWest completed most of the legwork for permits to build across multiple government jurisdictions in California and Nevada between 2005 and 2016. Financing was always a sticking point for the company that tried to get a federal loan through the Federal Railroad Administration’s Railroad Rehabilitation and Improvement Financing loan program. Those efforts were thwarted by Republican congressional leaders Rep. Paul Ryan and former Sen. Jeff Sessions who said they were uncomfortable with the size of the loan and XpressWest’s ability to pay it back.

The company once had a joint-venture agreement with China Railway International to assist with financing, but cut ties with the company in 2016, stating that it failed to meet several performance deadlines.

Edens, who formed the League of Legends FlyQuest team, also is co-owner of the National Basketball Association Milwaukee Bucks. When he and a partner acquired the team in 2014, he promised to keep the team in Wisconsin and build a new arena for it. The team’s 17,500-seat Fiserv Forum opened last month and was built by Mortenson Construction, the same company building the Las Vegas stadium for the Oakland Raiders.

In public appearances, Edens frequently said he was anxious to build rail systems between markets “too far to drive but too short to drive.” He talked about the prospect of building between Atlanta and Charlotte, North Carolina, and between Dallas and Houston, but didn’t show an interest in XpressWest.