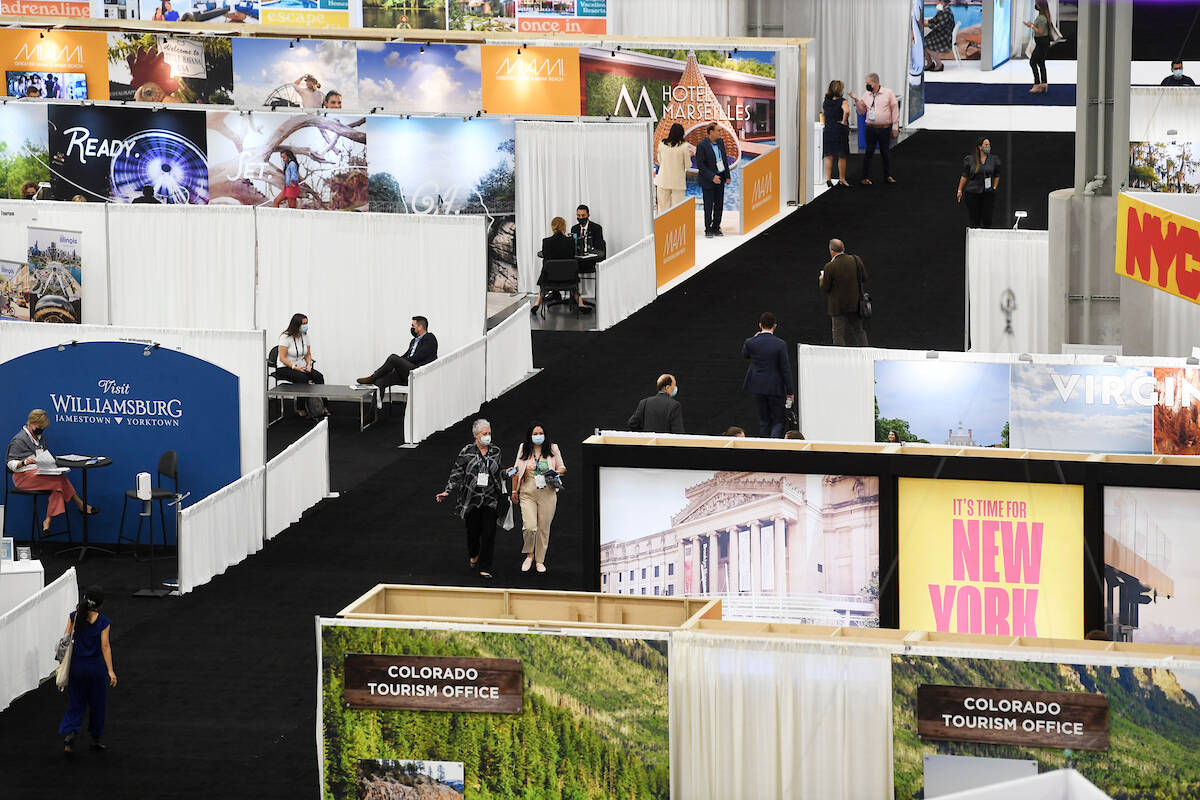 A small conference in Las Vegas this week is expected to produce big tourism dividends for Southern Nevada over the next three years.

IPW, an international gathering of U.S. travel organizations from across the country representing all categories of the industry, is meeting through Wednesday at the Las Vegas Convention Center’s new West Hall.

“After more than a year of incredible loss, our industry has never looked more united,” said Roger Dow, president and CEO of the U.S. Travel Association, organizers of IPW.

Dow kicked off the 52nd IPW with a ribbon-cutting ceremony Monday.

“We are thrilled to reconnect with our travel colleagues face to face over the next few days, igniting new business and inspiring a fierce comeback for international inbound travel, an effort that we will achieve through our work together,” he said at an opening ceremony.

Through 15-minute meetings between leisure and business planners and various destinations across the United States that began Monday, around $5 billion in future travel business is negotiated.

Las Vegas has a home-court advantage in this year’s IPW because travel sales representatives can show everything off in person.

“Securing and sponsoring the U.S. Travel Association’s IPW show in Las Vegas, especially as we continue to recover, is a major coup for our destination,” said Lori Nelson-Kraft, senior vice president of communications for the Las Vegas Convention and Visitors Authority.

“Being a host city allows us to get in front of travel buyers and journalists to showcase the world-class hotels and experiences that can only be found in Las Vegas,” she said.

IPW also is an opportunity for Brand USA, the United States’ destination marketing organization, to get in front of buyers to promote attractions, large and small, all over the nation.

By the attendance numbers, IPW doesn’t rank high among the city’s top shows. But it’s the influence of those attending that makes the event good for Las Vegas.

‘We worked hard to make it happen’

This year, 2,600 exhibitors, buyers and media representatives are attending the event. There are 600 buyers, 1,700 U.S. exhibitors, and 300 media members, with more than 200 of those coming from outside the United States.

“It didn’t because we worked hard to make it happen,” Dow said in an interview. “We discovered this thing called the National Interest Exemption which allows the State Department to allow people to come into the U.S. from countries that are blocked as long as they have an impact on the national interest.

“So we went to them and said, ‘Bringing these media and these buyers to Las Vegas with 300 or 400 of them coming in is not going to make a difference with COVID with 360 million Americans.’ But them not coming is going to make a phenomenal impact,” he said.

“If they weren’t here, guess what? They’re planning their travel to Thailand, the U.K., or Mexico or somewhere else. That’s why it’s so important to get them here.”

The association said 300 attendees came to Las Vegas via the National Interest Exemption.

Of the international attendees, the five largest delegations are from Mexico, Brazil, Germany, the United Kingdom and France.

The return on investment is expected to be good for Las Vegas. Historically, there has been $5.5 billion in future travel to the United States over the next three years following IPW. Of that, for the host city, it’s an estimated $467 million.

The LVCVA said that while numbers are expected to look differently in light of the pandemic, IPW would lead the city’s economic and jobs recovery for the rebound that will come in 2022 and beyond.

“Here in Las Vegas, we have an opportunity to transform the trajectory of travel in the weeks, months and years ahead and serve as a model for restarting international travel and for conducting safe meetings and events,” Dow said.

“As the nation’s destination marketing organization, Brand USA inspires people around the world to experience the United States’ diverse destinations and attractions, from our most iconic destinations to our small-town gems and everything in between,” he said.