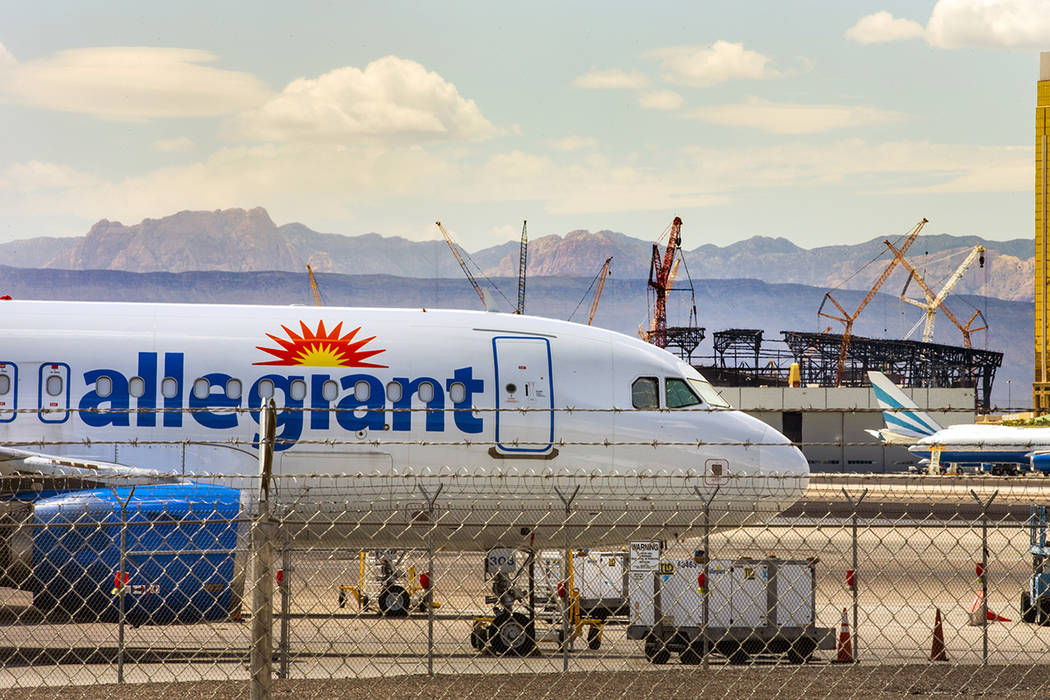 A Las Vegas-based Allegiant Air plane sits on the tarmac at McCarran International Airport with the current Raiders Stadium build in the distance behind. (L.E. Baskow/Las Vegas Review-Journal) @Left_Eye_Images

Allegiant Air’s parent company is looking to sell a fast-growing side business.

Las Vegas-based Allegiant Travel Co. said in a news release Wednesday it is evaluating “strategic alternatives” for its golf-course-management software firm, Teesnap, and that the business is “being held for sale.”

Teesnap had been adopted by 590 golf courses as of last year, up from just three in 2014, according to a filing with the Securities and Exchange Commission.

“Recently, we had a strategic conversation with a party interested in acquiring Teesnap and we intend to open up similar discussions with additional counter parties,” Allegiant Chief Financial Officer Greg Anderson told analysts Wednesday, according to a script of his prepared remarks.

Allegiant has expanded into some unusual side ventures for an airline in the past several years. The deep-discount airline, which has owned Teesnap since the software firm’s founding in 2013, is also developing a 22-acre riverfront resort in Florida and has opened two arcades — one in Utah and another in Michigan — that feature laser tag, bumper cars and escape rooms.

Anderson said Teesnap is “cutting edge,” but fueling its continued growth “requires the sales force and resources that an organization focused in this space can best provide.”

He added executives believe “the right course of action for both Allegiant and for Teesnap is a sale.”

Allegiant spokeswoman Hilarie Grey said in an email the sales effort is not at all motivated by criticism of the carrier’s push outside aviation.

She added that Allegiant Chairman and CEO Maurice “Maury” Gallagher “is an innovator who is willing to look at different businesses and see if they are a long-term fit.”

“Why are you spending any capital and company focus on golf course software and Dave & Buster’s-like game rooms?” Pfennigwerth asked Allegiant executives at the time, adding the ventures “might be interesting experiments” but questioned why shareholders are paying for them.

“Well, we look at the synergistic value,” Allegiant President John Redmond replied. But before he finished his thoughts, Pfennigwerth interrupted.

“John, John, I’m sorry. … I’ve covered Allegiant for a long time. There is no synergy between golf-course-management software” and the airline, he said.

Allegiant announced it wants to sell Teesnap as part of its second-quarter earnings release.

The carrier, which flies from small, underserved cities to warm-weather vacation spots, usually without competition on its routes, booked $70.5 million in profit for the three months ending June 30, up 41 percent from the same period last year.

Allegiant, which was dogged three or four years ago by a rash of headline-grabbing mechanical problems and emergency landings, also said maintenance cancellations were down 87.6 percent year-over-year.