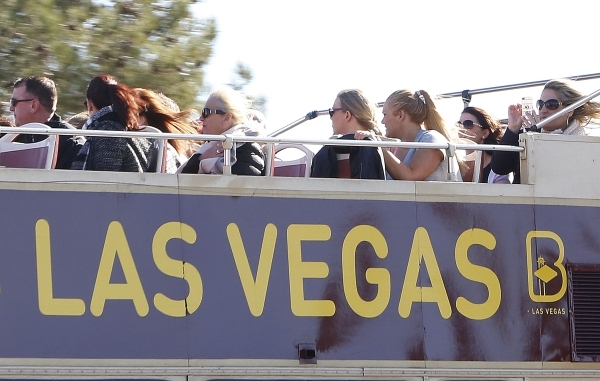 Tourist on an open-top tour bus enjoy the ride on the strip during a sunny morning on Tuesday, Nov. 17, 2015. Bizuayehu Tesfaye/Las Vegas Review-Journal Follow @bizutesfaye

The tourism industry finished 2015 strong with visitation indicators finishing ahead of 2014 in nearly every category.

The Las Vegas Convention and Visitors Authority ended suspense earlier in the month by announcing that visitor volume shattered the previous year’s record total. The only question that remained was whether other indicators also would be better.

The total number of conventions and meetings was the only category that didn’t exceed 2014’s total.

Convention attendance increased for the fifth straight year, but it didn’t top the all-time record of 6.3 million convenioneers in 2006.

The 2015 convention numbers were bolstered by a huge December increase. The LVCVA reported convention attendance of 234,668 for the month, 47.5 percent ahead of December 2014. Authority officials said the big increase was due to shows rotating into December from other destinations. Among the shows appearing in the city was Power-Gen International, an international conference on power generation.

There were 1,535 conventions and meetings in December, 38.5 percent more than the previous year.

The city’s transportation resources were busier in 2015 than a year before.

Earlier this week, McCarran International Airport reported an 8.9 percent increase in passengers in December boosting the annual total to 45.4 million, 5.8 percent more than in 2014.

Auto traffic also was strong with an average 44,149 cars a day, 5 percent more than the previous year, on Interstate 15 at the California-Nevada state line and 109,204 per day, 6.3 percent more than in 2014, on all major highways leading to Las Vegas.

Highway traffic counts are recorded by the Nevada Department of Transportation and include local travelers using the roads as well as tourists coming to the city.

Laughlin, which also is monitored by the LVCVA, didn’t fare as well as Las Vegas, posting visitor volume of 1.9 million for the year, a 5.1 percent decline from 2014. Competition from Southern California’s tribal casinos is cited as the reason for the decline.

Mesquite did better, showing visitor volume of 1.2 million. 4.1 percent ahead of the previous year with the average daily room rate up 3.7 percent to $55.61 for the year and occupancy up 2 percentage points to 74.3 percent.