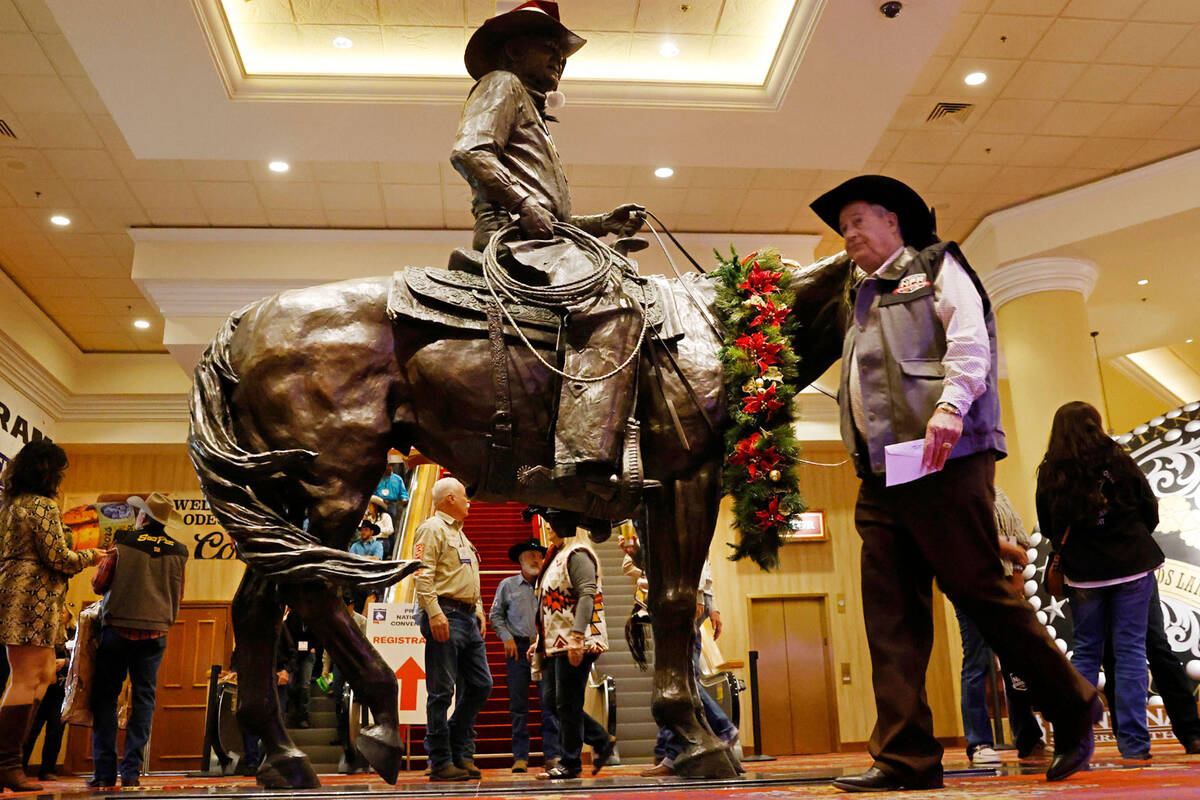 Atendees walk past Benny Binion's statue, the man who brought the National Finals Rodeo to Las Vegas, at the South Point, on Tuesday, Nov. 29, 2022, in Las Vegas. The South Point is the home to the PRCA National Convention during NFR. (Bizuayehu Tesfaye Las Vegas Review-Journal) @btesfaye 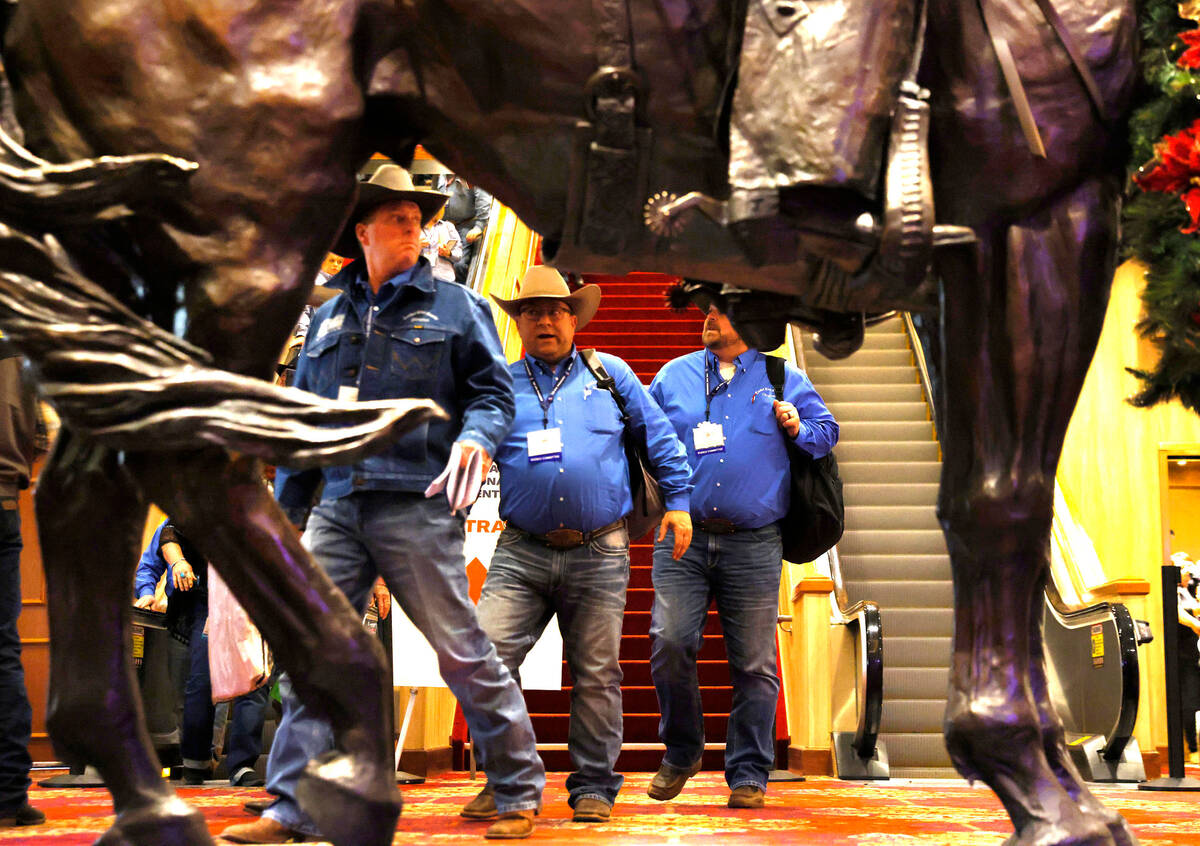 Cowboys walk past Benny Binion's statue, the man who brought the National Finals Rodeo to Las Vegas, at the South Point, on Tuesday, Nov. 29, 2022, in Las Vegas. The South Point is the home to the PRCA National Convention during NFR. (Bizuayehu Tesfaye Las Vegas Review-Journal) @btesfaye

Cowboys, music fans and sports fanatics are flooding into Las Vegas this week thanks to a long list of events that starts with the National Finals Rodeo on Thursday at the Thomas & Mack Center.

And a stacked calendar of events — including rodeo-related festivities, country music concerts, headlining residencies, a college football championship game and a home Raiders contest — is driving up room rates, during the slowest period of the year when travelers can typically get better deals after a busy Thanksgiving weekend.

As of Wednesday afternoon, the lowest-priced two-night booking available through Hotels.com was $209 per night for a Friday through Sunday stay at Circus Circus. Prices are flexible and can change based on available supply and demand.

The least expensive room via MGM Resorts International was $499 per night at Excalibur, not including taxes and fees. Other properties such as Aria were asking as much as $874 per night. Caesars Entertainment properties offered a base rate of $329 per night at Rio and nearly $600 per night at Planet Hollywood.

NFR has long helped boost room rates during its 10-day run, falling every year between Thanksgiving and Christmas, since arriving in Las Vegas in 1985. Last year, nearly 170,000 fans attended NFR.

“It (NFR) has always served as an important event in Las Vegas for a variety of reasons, but it really set the course for the importance of special events coming to Las Vegas at times where leisure visitation or meeting and convention business wasn’t at maximum capacity,” Nelson-Kraft said. “That was a really important strategy.”

Beyond NFR and its ancillary programming, Allegiant Stadium will be hosting the PAC-12 football championship game on Friday and the Los Angeles Chargers will play against the Las Vegas Raiders on Sunday. Country music singer George Strait will perform Friday and Saturday at T-Mobile Arena while Luke Bryan’s Resorts World residency has performances overlapping with NFR. And Adele returns to the Colosseum at Caesars Palace for the second weekend of her long-anticipated residency.

“This is a pretty well-heeled crowd — particularly the group that’s actually going to the NFR events at Thomas & Mack,” Josh Swissman, industry analyst and managing partner at The Strategy Organization, said. “Their tolerance for higher room rates is there. And there’s not as much price elasticity as you might see in other areas.”

Resorts and tourism leaders see an ability to increase visitation and consumer spending through additional special events. More than 50 percent of visitors add to their trip, or stay longer, to attend a sporting event and spend about $1,000 more per trip when they visit, said Nelson-Kraft, citing LVCVA research.

Sporting and special events have already shown their impact on visitation and average daily room rates — an indicator that the LVCVA views as a sign of economic health.

Las Vegas tourists paid the highest hotel rates in history in October, according to LVCVA data released Tuesday. An estimated 3.6 million people visited Southern Nevada, and visitors paid an average daily room rate of $209.89. On the Strip, the rate was higher at $225.69 a night.

“What you’ve seen especially this year, when you look at the several sporting and special events that have been on our calendar, it has really given Las Vegas a very positive trajectory for the resorts, trajectory for their ADR, for their (revenue per available room),” Nelson-Kraft said.

Record ADRs are partly why executives at some of the area’s publicly traded companies continue to feel cautiously optimistic, despite macroeconomic trends of high inflation and a possible economic downturn.

“As far as ADR, we’ve seen very little resistance,” Gullbrants told investors during the November call. “We’ve leveraged as much, we pushed as hard as we can, and kudos to our revenue team and sales team, they’re absolutely crushing it.”

A Tuesday report to investors by Truist Securities’ Barry Jonas said room rates in the fourth quarter are “trending far above 2021 levels after much tougher (comparisons) in Q3,” with rates up between 22 and 45 percent year over year, depending on the operator.

Brendan Bussmann, industry analyst and managing partner of B Global, said the record rates mentioned in recent earnings calls and in October’s visitation report suggest a resiliency in the industry even when taking inflation into account.

“There’s a customer out there that has some pent-up demand, is still recovering, and you have other people that are perennial customers that will still come because that’s what they do,” Bussmann said. “It’s a combination of those customers. That’s what makes Vegas unique, is we can cater to every one of those customers.”

Tourism leaders expect to continue stacking special events and add new events such as the LVCVA’s successful bid for the 2028 NCAA men’s Final Four, the national college basketball championship that will be played at Allegiant Stadium.

“Any time we’ve added entertainment capacity, the city has been really successful at absorbing that additional capacity and turning that into bigger room rates, which ultimately lead to better performance for all of the casino resorts on the Strip and other parts of the city, too,” Swissman said.

This story has been updated with the correct spelling of Brendan Bussmann.