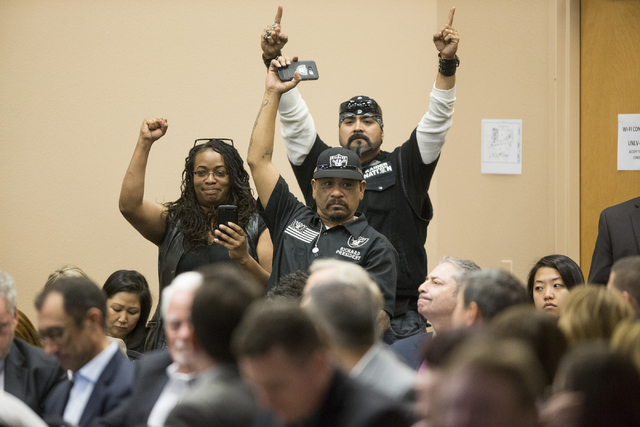 Monday’s announcement that the team will relocate to Southern Nevada from Oakland not only is a boost to fans such as Las Vegans Shirley Ramirez and Marlon Rice, but to representatives of the city’s tourism industry who see a potential bonanza in additional visitation.

From back in January 2016, when it was first disclosed that Raiders owner Mark Davis was interested in Las Vegas as a possible home, the feeling always has been that a match between the Raiders and Las Vegas was too good to be true.

“A lot of people just like the Raiders,” said Ramirez, the leader of the family friendly 702 Raider Nation fan club that has more than 200 members.

“I think in the beginning, it was the bad-boy image the Raiders carried. But now, I think it’s just a fun team to watch.”

Added Rice, who owns an internet radio station and goes by the on-air name of DJ Thump: “Vegas already has some of the biggest followings for the Dallas Cowboys and for the Raiders.”

Rice is also the head of 725 Raider Nation and goes with his wife to Raiders games as often as he can.

“Because California is so close, I think it’s a welcome fit with the Raiders here,” he said.

He attended the second-to-last regular-season Raiders game of the 2016 season, calling it “one of the best and worst games I’ve ever attended.”

“I was sitting right next to the Black Hole (the seating area for the most rambunctious of Raiders fans), and you could just feel the love when they score in your end zone and everybody starts slapping the walls,” he said.

While the Raiders defeated the Indianapolis Colts 33-25 on Christmas Eve, it was also the game in which quarterback Derek Carr broke his right fibula, ending his season.

“You could hear a pin drop in that stadium after that,” Rice said.

The team would go on to lose its last regular-season game and a wild-card playoff game.

While fans are excited to have their Raiders in town, Southern Nevada’s tourism economy might benefit most from having the Silver and Black here.

“It’s another arrow in our quiver of amenities in Las Vegas,” said Michael Goldsmith, vice president of international marketing for the Las Vegas Convention and Visitors Authority. “We’re very excited about the possibility of adding an NFL franchise and believe Las Vegas would be a terrific place for that. Our entire community benefits anytime we have the opportunity to host major sporting events.”

With some 150,000 hotel rooms, enough to regularly host weekend games as well as big events such as the Super Bowl, Las Vegas is well equipped for any major gathering.

The city already has the reputation for being great hosts for sporting events.

“We’re the home of UFC, and for decades, we’ve been known as the fight capital of the world,” Goldsmith said.

Goldsmith noted that in March Las Vegas hosted four college basketball tournaments, a NASCAR race — annually the largest sporting event in the state — a UFC fight, the Rugby Sevens international competition and MLB with spring training sellouts between the Chicago Cubs and the Cincinnati Reds for Big League Weekend, sponsored by the LVCVA.

“We host more sporting events in one month than most destinations host in a year,” Goldsmith said. “The events not only attract thousands of visitors who spend literally millions of dollars, but they also provide us with valuable global exposure and reinforce the image that Las Vegas is a destination like none other.”

The international flavor of events such as the Rugby Sevens and the World Financial Group Continental Cup of Curling staged at Orleans Arena attracts visitors from other countries, one of the LVCVA’s goals.

The Raiders also have some international flair, playing one of their home games last year in Mexico City. The Raiders brand is strong south of the border, and the LVCVA hopes to capitalize on that when the team begins playing its home games here. It intends to target Canadians when the Golden Knights’ NHL team begins play in October.

“There are people in L.A. that are going to love to see them here because it’s a pretty easy trip from Southern California,” said Ramirez, an office assistant and credit manager for Capital Westward Systems & Control in Henderson. “It’s going to turn Las Vegas into a different kind of town, I think, and it also should be good for UNLV.”

The Rebels football team also would use the stadium that’s being built for the Raiders.

“We’d do well even if it were the Jacksonville Jaguars coming, but there will be quite a bit more impact with the Raiders,” Rice said. “The Raiders brand, the silver and black, the skull, the whole logo … I think it’s really going to be big.”

He’s, too, is not worried about the high cost of tickets.

“We go with our heart,” Rice said.

“It’s a new house and a new neighborhood, and we’re going to take care of it.”