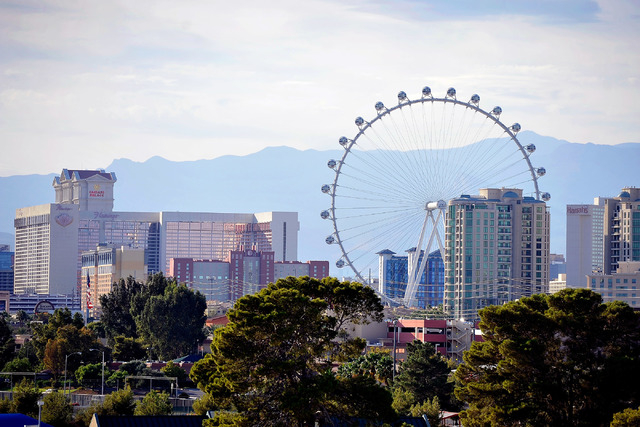 Hotels and the High Roller are seen along the Strip on Friday, Oct. 17, 2014. (David Becker/Las Vegas Review-Journal)

The October total of 3.58 million tourists was second only behind the 3.68 million recorded in March this year.

It was the 10th straight month of year-over-year percentage increases compared with 2013.

October figures were 3.2 percent ahead of the same month a year ago. That November has five complete weekend dates and that Thanksgiving weekend last year ended in December bodes well for a high total next month as well.

For the first 10 months of 2014, visitation is up 3.7 percent to 34.7 million putting the region in position to post a record total for the year in excess of an unprecedented 40 million people.

Other October tourism indicators were a mixed bag, but mostly on the plus side.

Citywide occupancy, the average daily room rate and revenue per available room were up for the month, but convention attendance and gaming revenue were down.

Downtown room rates and revenue per room lagged and weekend occupancy rate percentages trailed the same month from the previous year for the first time since March 2013.

While the city’s average daily room rate was up for the month, downtown rates were off significantly. The LVCVA reported the downtown rate down 21.1 percent to $65.26 a night. By comparison, the Strip rate averaged $131.19.

Convention attendance for the month fell 9.1 percent to 473,695 despite the number of conventions and meetings rising 19.3 percent to 3,079.

Authority analysts attribute the drop-off to a series of scheduling rotations. The International Baking Industry Exhibition, conducted every three years, was in Las Vegas last year with 21,000 attendees and will return in 2016. The International Vision Expo and the All Baby and Child Show, which each drew about 14,000 people, had their events earlier in the year.

Citywide resort occupancy was up 1.3 percentage points to 89.1 percent, the fourth-best percentage rate of the year and the 10th straight month of increases.

Laughlin and Mesquite also had a good October.

Laughlin visitor volume was up over the previous year for the first month since December 2013 with 175,235 tourists, a 4.7 percent increase over October 2013.

Mesquite had its 11th straight month of double-digit percentage increases over the previous year. The community known for its golf resorts 80 miles northeast of Las Vegas reported 108,450 visitors, 12 percent more than a year earlier.