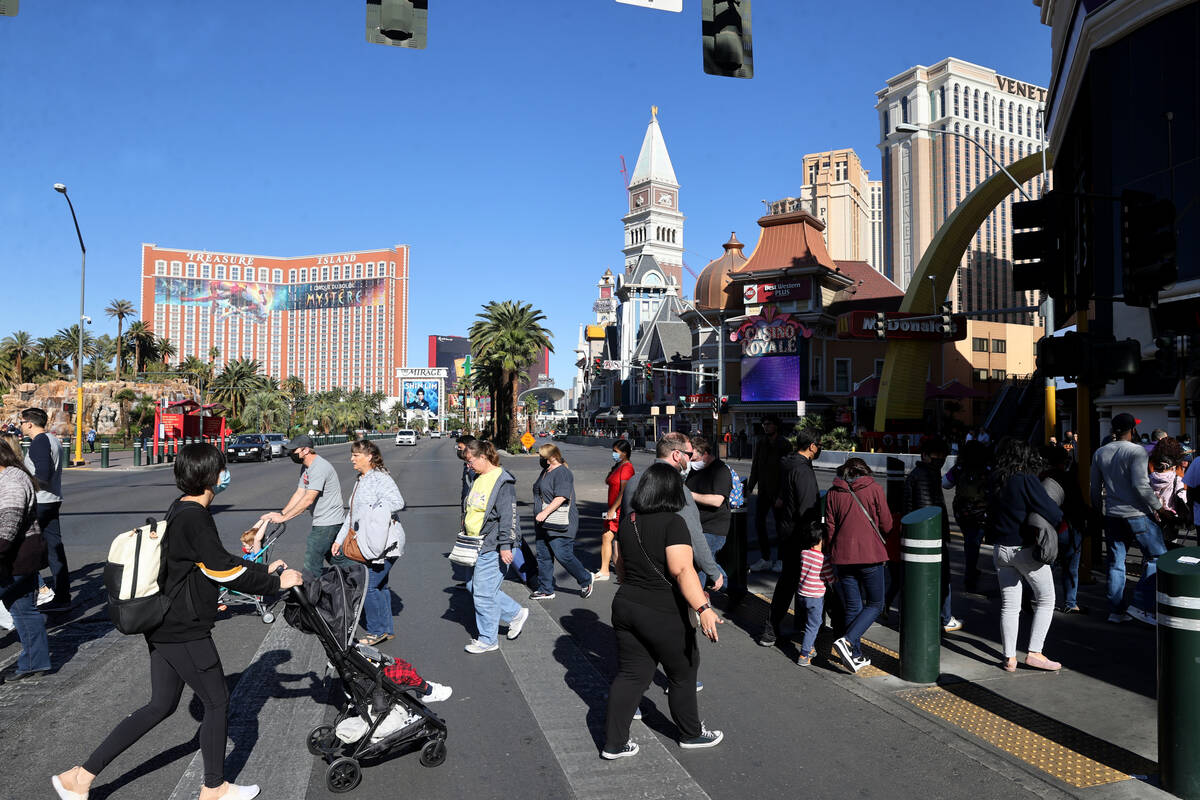 People walk between The Venetian and The Mirage on the Strip in Las Vegas Monday, Nov. 22, 2021. (K.M. Cannon/Las Vegas Review-Journal) @KMCannonPhoto 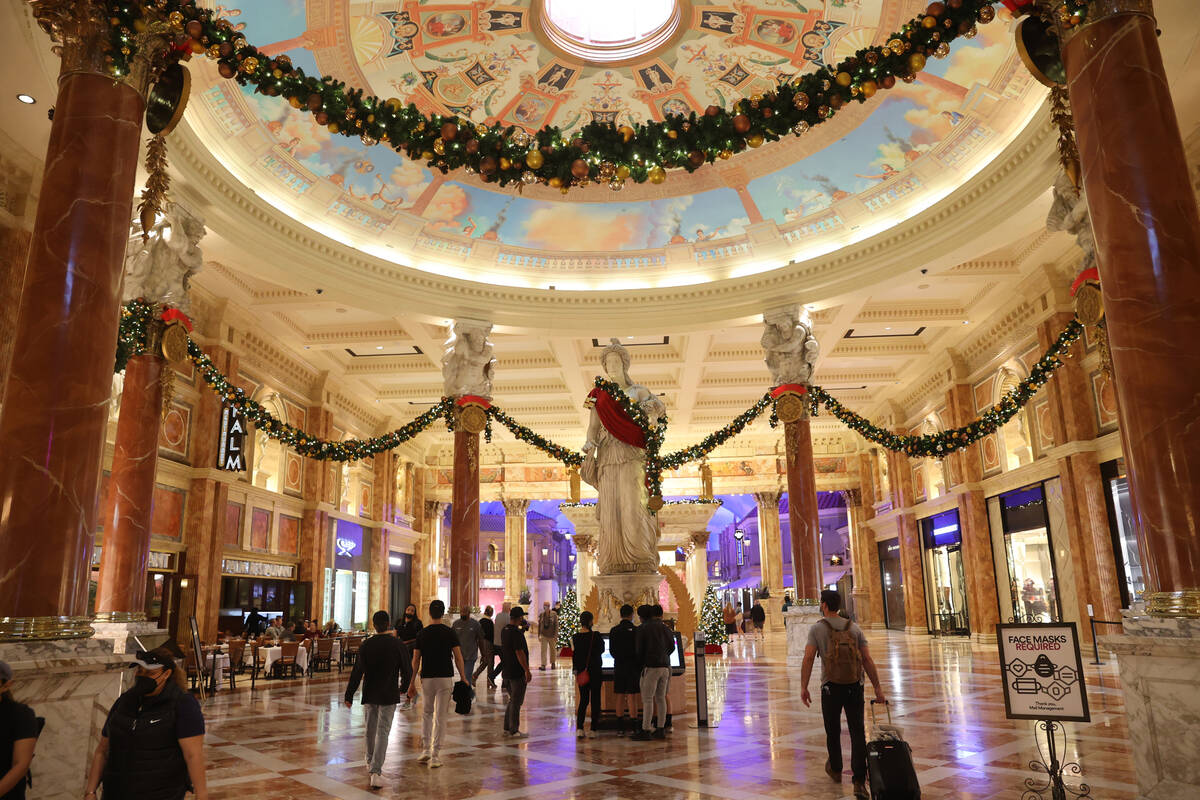 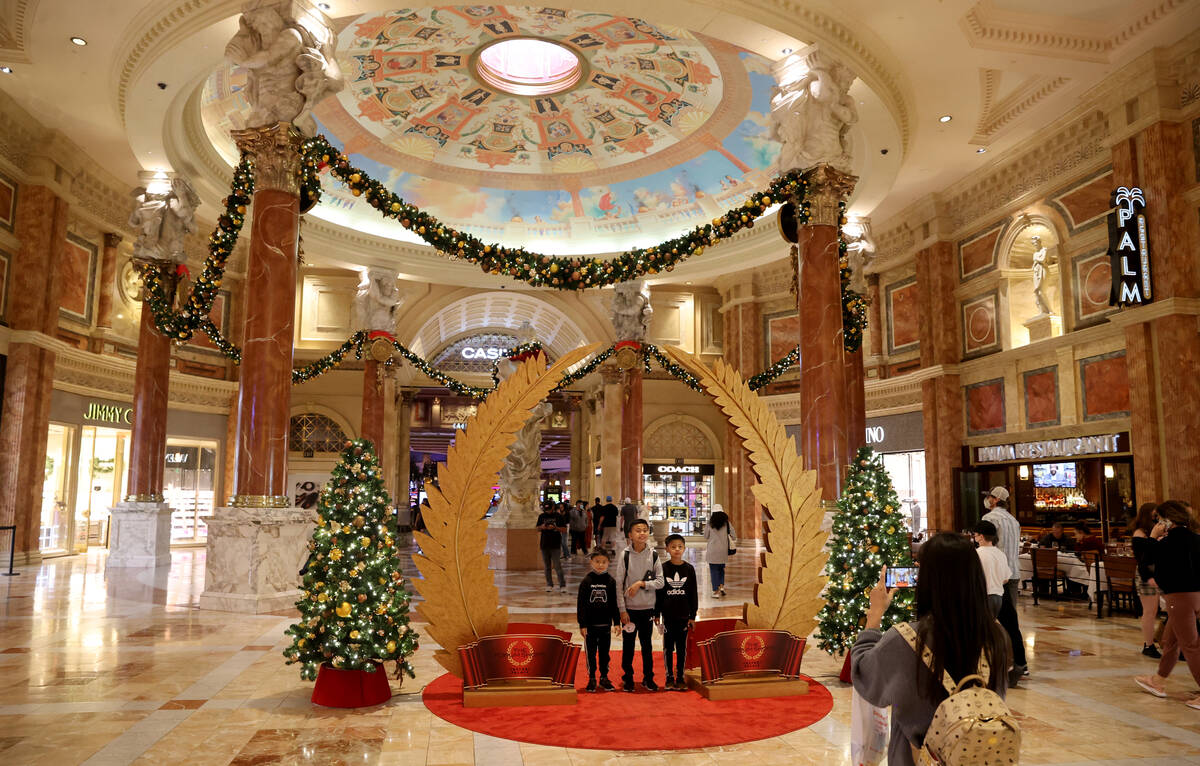 Tien Vu of Huntington Beach, Calif. takes a holiday photo of her sons, from left, Jacob, 6, Ethan, 11, and Mason, 8, at the Forum Shops at Caesars on the Strip in Las Vegas Monday, Nov. 22, 2021. (K.M. Cannon/Las Vegas Review-Journal) @KMCannonPhoto 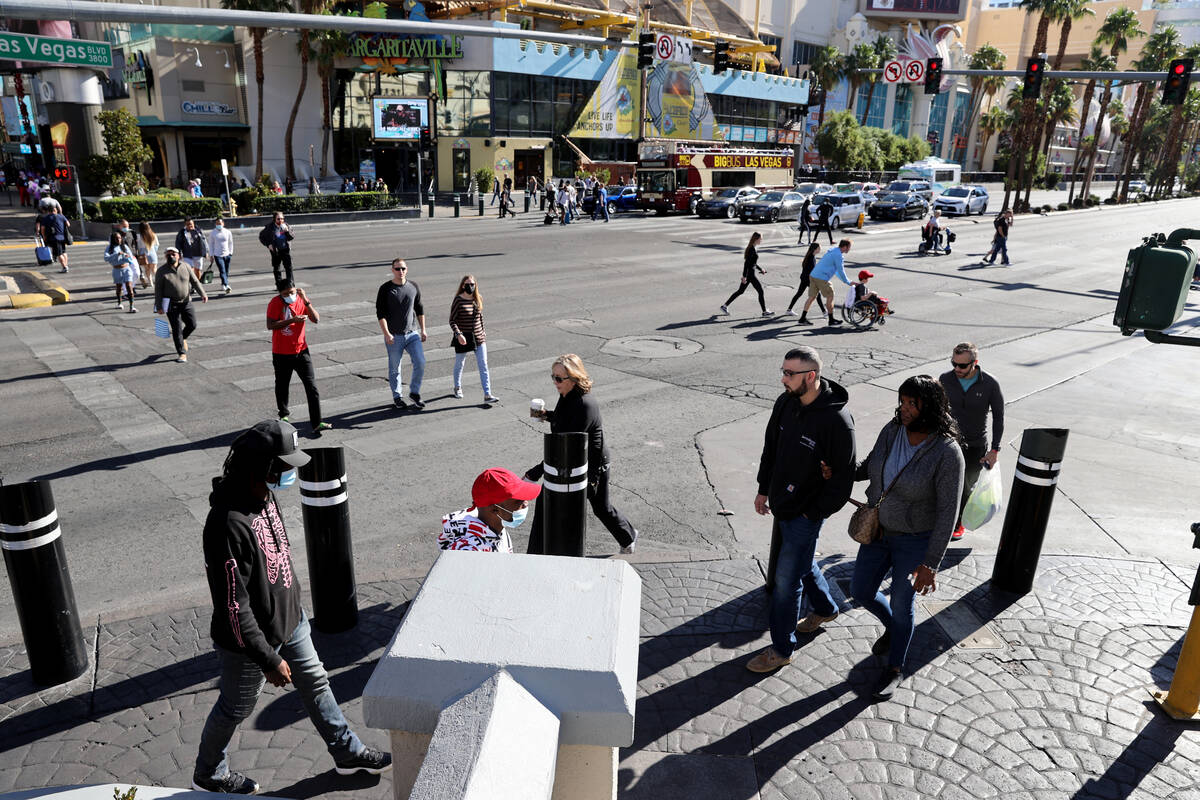 People walk between The Linq and Caesars on the Strip in Las Vegas Monday, Nov. 22, 2021. (K.M. Cannon/Las Vegas Review-Journal) @KMCannonPhoto 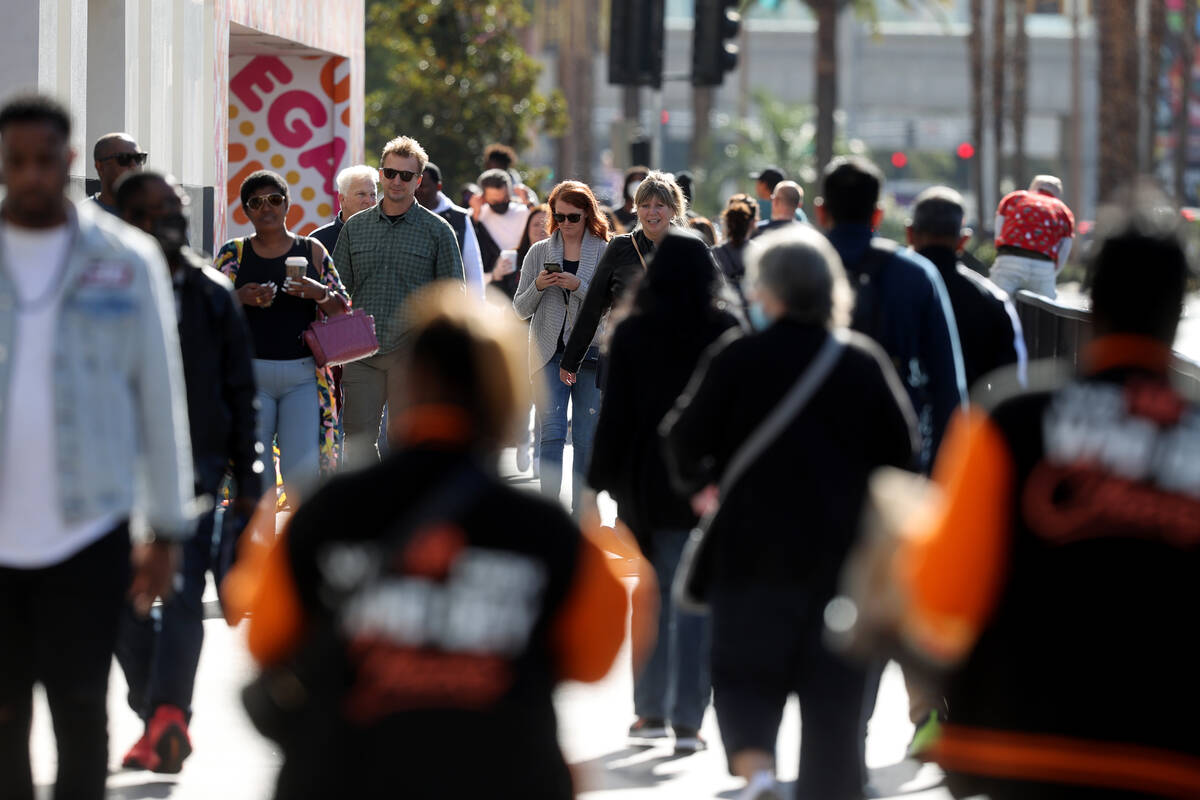 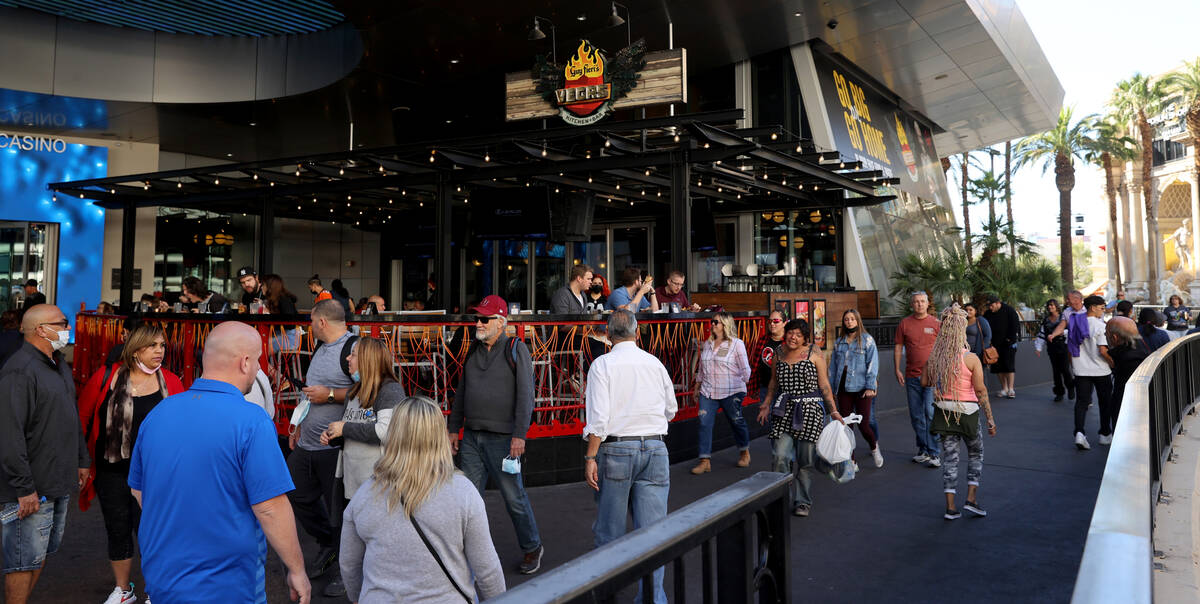 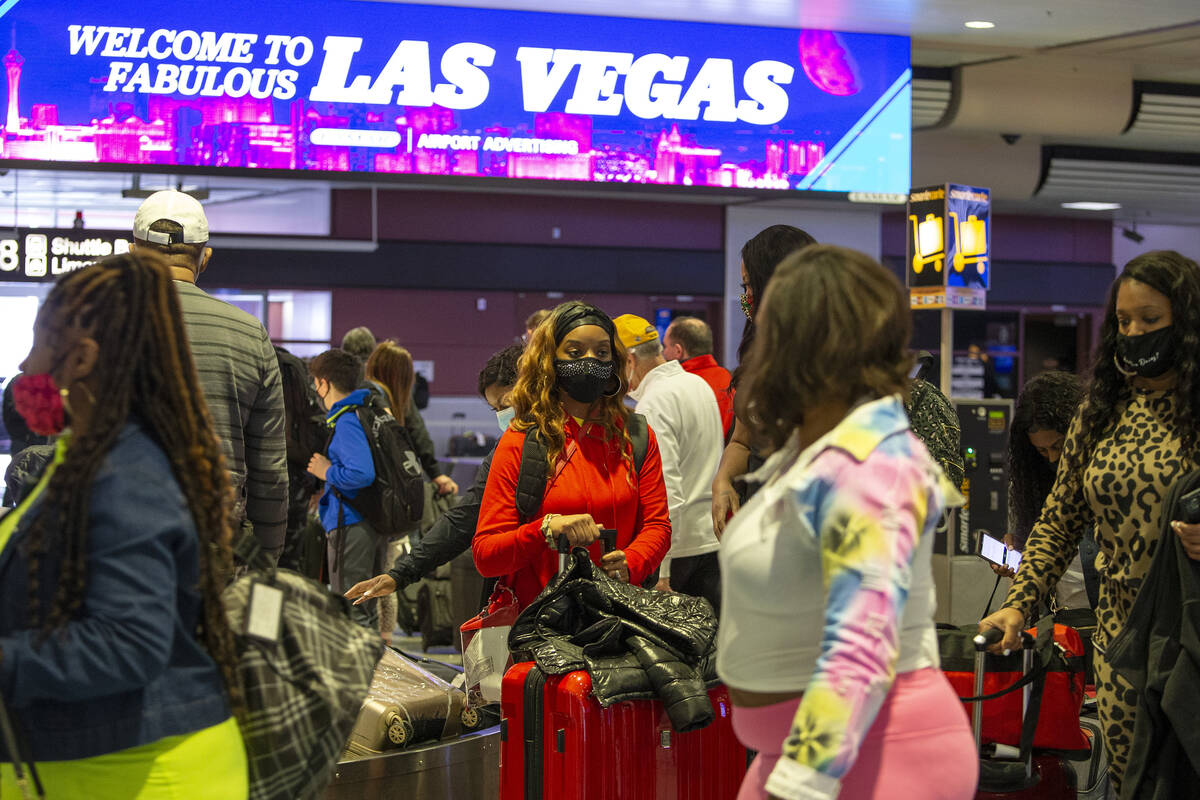 Thanksgiving holiday travelers are coming, and they have quite the appetite.

It’s the second Thanksgiving weekend during the pandemic. But the circumstances are different this year: There are no pandemic capacity restrictions, shows are up and running, COVID-19 vaccines are widely available across the country and international borders are open to vaccinated travelers. Mask mandates are again in place.

Those factors bode well for Las Vegas’ tourism economy and its chances of resembling a pre-pandemic Thanksgiving holiday weekend.

Officials anticipate Las Vegas visitation will be more in line with 2019 than Thanksgiving 2020. That’s when large gatherings were prohibited, the Centers for Disease Control and Prevention was advising against travel and Gov. Steve Sisolak had just ordered casinos to cap their maximum number of patrons to 25 percent of fire code capacity.

Holiday weekends are a favorite of Las Vegas Valley resorts because they present guests the opportunity to stay — and spend — an extra day or two, Nelson-Kraft said. She added that hotels fill roughly 90 percent of the rooms they make available during Thanksgiving weekend.

The visitors authority hasn’t calculated visitor projections during the pandemic and won’t change that for the holiday weekend. However, the authority does anticipate a busy weekend with the potential to reach 2016 to 2019 levels of roughly 300,000 visitors for the weekend, she said.

The Nevada Department of Transportation anticipates a similar-sized visitor volume for the weekend with many of them coming from Southern California and Arizona, spokeswoman Adrienne Packer said. Tourism is generally down during the pandemic as some tourists remain reluctant to risk exposure to the deadly coronavirus, she said, adding that recent holiday weekends such as Fourth of July weren’t significantly lower than average.

Motorists will have to contend with higher-than-average gas prices across the West. A gallon of gas on Monday cost an average of $3.409 in the United States, according to AAA.

Nationally, an estimated 53.4 million people will travel for the Thanksgiving holiday this year, up 13 percent from 2020, according to AAA.

Not just holiday, but events

Resorts have seen “much higher” bookings, occupancy, room rates and ticket sales for this upcoming Thanksgiving holiday weekend than they did last year, Nevada Resort Association President Virginia Valentine said. She cited concerts, events and 10 major sporting events over the weekend — a Raiders game, a Golden Knights game, college basketball tournaments, boxing, motorsports and an equestrian event among them — as drivers behind the holiday weekend.

She said resorts are excited about the potential return of international tourists after nearly two years of pandemic travel restrictions. The U.S. opened its borders on Nov. 8 to international travelers who have proof of vaccination against COVID-19.

International guests stay longer and spend more, Valentine said, adding that “Thanksgiving doesn’t have the same meaning for them.”

A J.P. Morgan survey of Las Vegas Strip room rates for the week of Thanksgiving published Oct. 31 found midweek rates were up 6 percent and weekend rates were up 16 percent over the same week in 2019. Room rates are often viewed as a useful stand-in for assessing demand.

Room rates looked “strong” over the extended holiday weekend, according to Brendan Bussmann, partner at Global Market Advisors consulting firm. He said he hopes the rates continue to reflect growth and return to pre-pandemic levels.

Last year’s Thanksgiving “was actually surprisingly strong” by 2020 standards as people had pent-up demand to travel but couldn’t see their families, said Amanda Belarmino, a UNLV hospitality professor who studies the relationships between social and cultural movements and customer behavior.

She said Las Vegas’ lack of family-friendly activities makes it less of a traditional destination for Thanksgiving and Christmas travelers. But she added that travel demand to Las Vegas has grown along with the valley’s population.

“I would expect this year to be similar to what we usually see, lighter demand that we have been seeing throughout this year but with a fair amount of travel to see family members here,” she said. “Also, the reopen(ed) buffets will attract people who want to get together without cooking.”

Many buffets have returned though gaming operators have been reluctant to bring them back in full. Caesars Entertainment Inc. announced a Thanksgiving night dinner special at Caesars Palace’s Bacchanal Buffet, as well as holiday-themed meals at restaurants across its Las Vegas properties.

The limited availability of buffets have “changed the dynamics of how people may try to potentially overeat on their Thanksgiving meal,” Bussmann said. “But our food/beverage industry is unmatched by anywhere else in the world. … There’s plenty of options out there to still have a great meal.”

Many resort restaurants pair Thanksgiving dinner menus with holiday decor while retailers “really lean into” Black Friday shopping to kick off the holiday season, Nelson-Kraft said. The Bellagio Conservatory and Botanical Gardens are a holiday draw, as is the pop-up ice skating rink at The Cosmopolitan of Las Vegas, she said.

People become eager for the beginning of the holidays, particularly while the world continues to navigate the pandemic, she said. People still have pent-up demand to get out of town and the holidays can offer a good time where people can celebrate with their families.

“Vegas does a really great job of balancing the two,” Nelson-Kraft said.