Johnny Brooks sits on the witness stand in shackles, forced to testify about the day he was shot in an attack that left two people dead. (Michael Quine/Las Vegas Review-Journal) 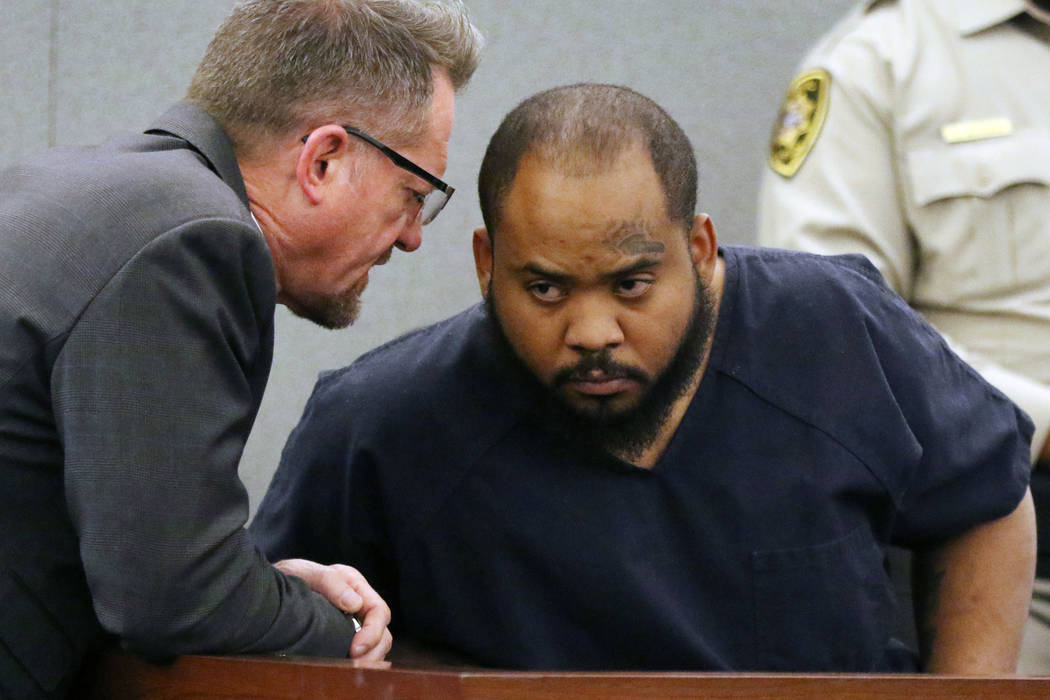 Johnny Brooks, the lone surviving victim of a shooting that left two dead, listens to his attorney Robert Draskovich as he testifies in Durwin Allen's murder case at the Regional Justice Center on Wednesday, Feb. 12, 2020, in Las Vegas. Allen was charged in the killings of Myron Manghum, 33, and Alyssa Velasco, 27. (Bizuayehu Tesfaye/Las Vegas Review-Journal) @bizutesfaye 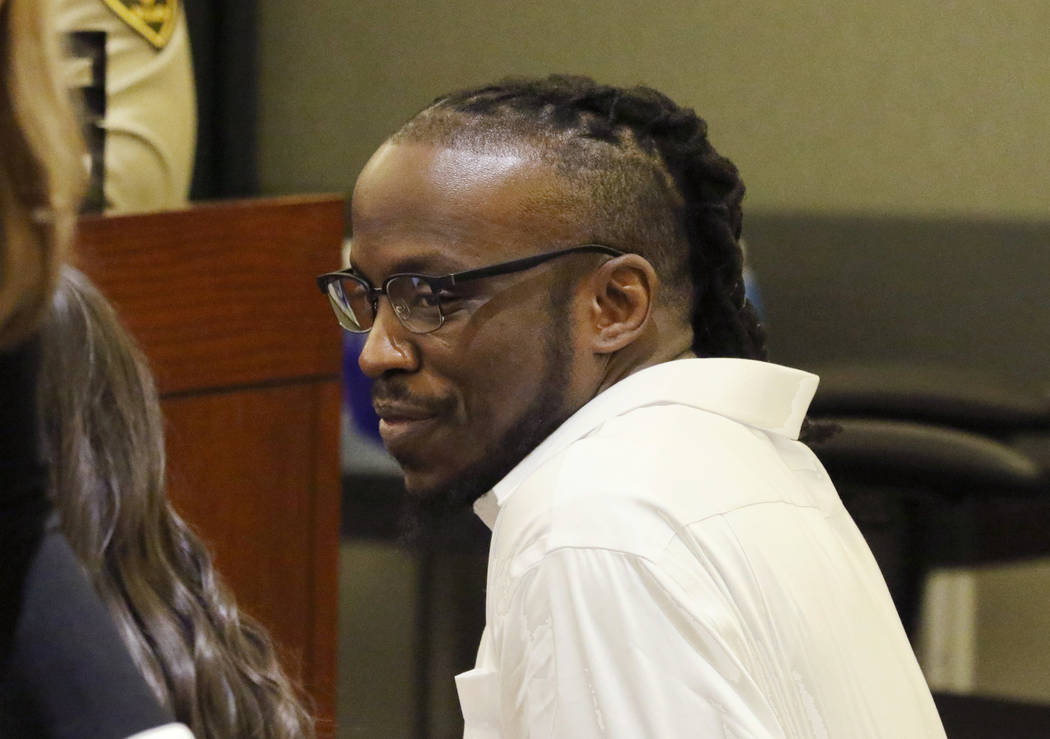 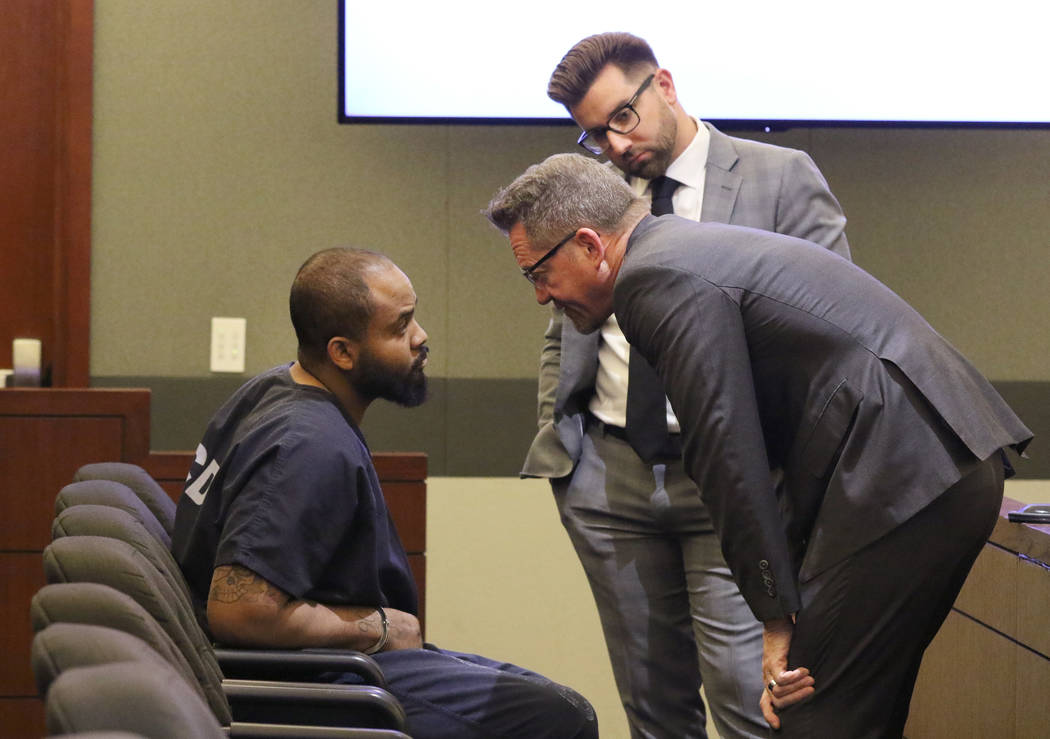 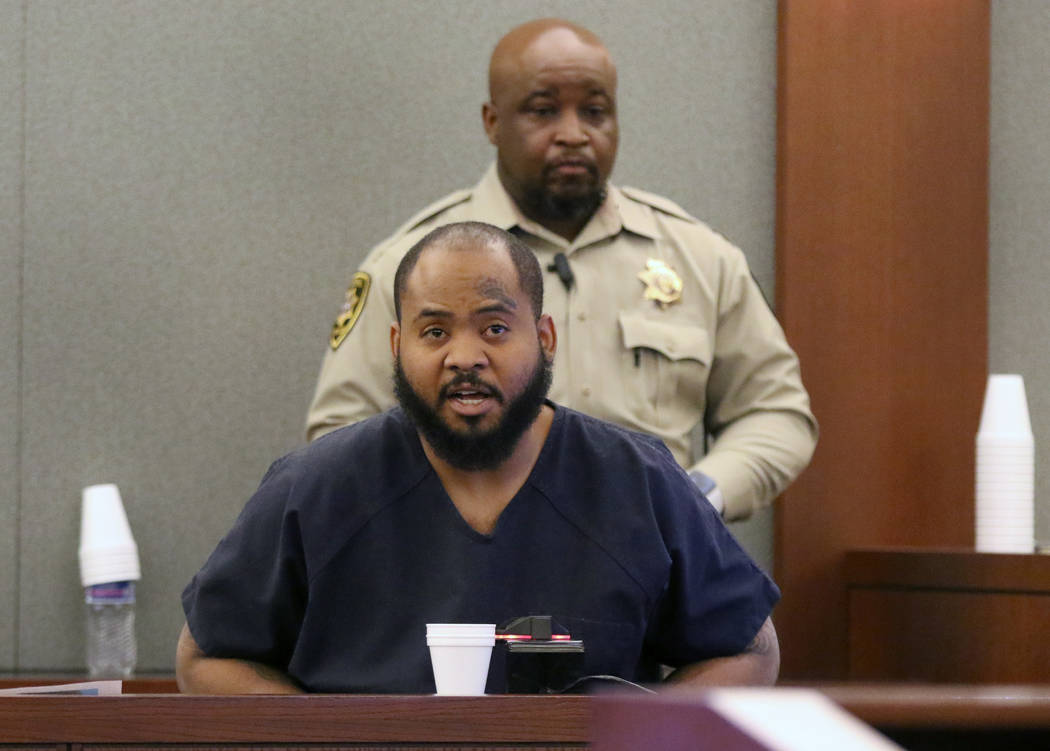 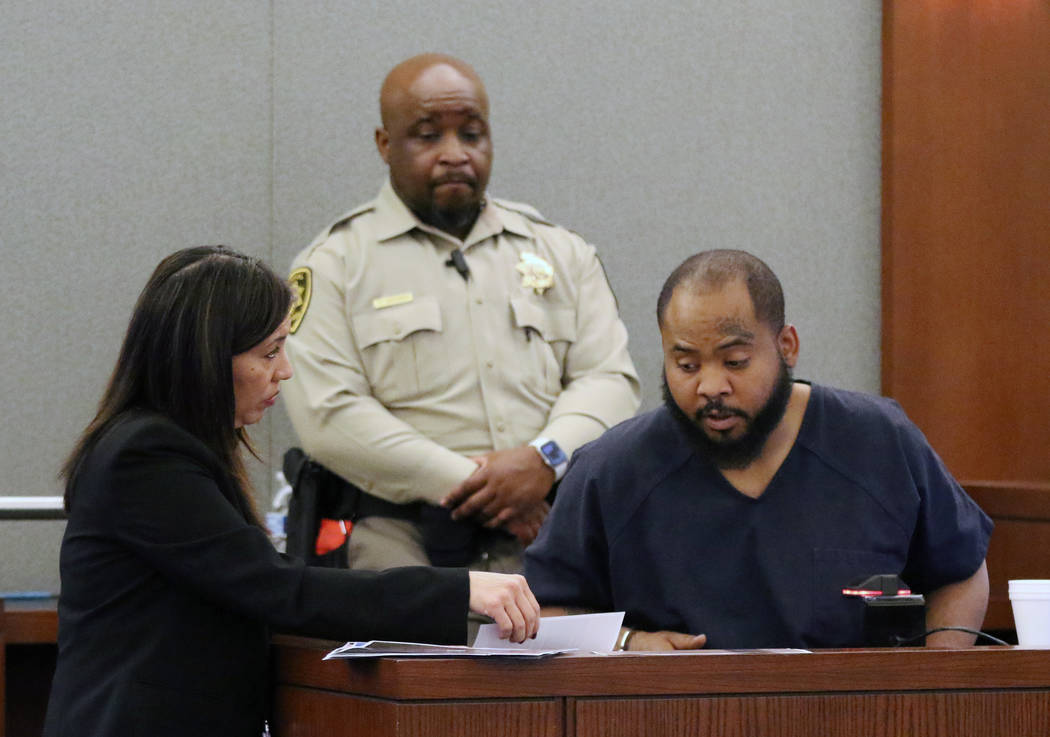 Prosecutor Danielle Pieper questions Johnny Brooks, the lone surviving victim of a shooting that left two dead, as he testifies in Durwin Allen's murder case at the Regional Justice Center on Wednesday, Feb. 12, 2020, in Las Vegas. Allen was charged in the killings of Myron Manghum, 33, and Alyssa Velasco, 27. (Bizuayehu Tesfaye/Las Vegas Review-Journal) @bizutesfaye 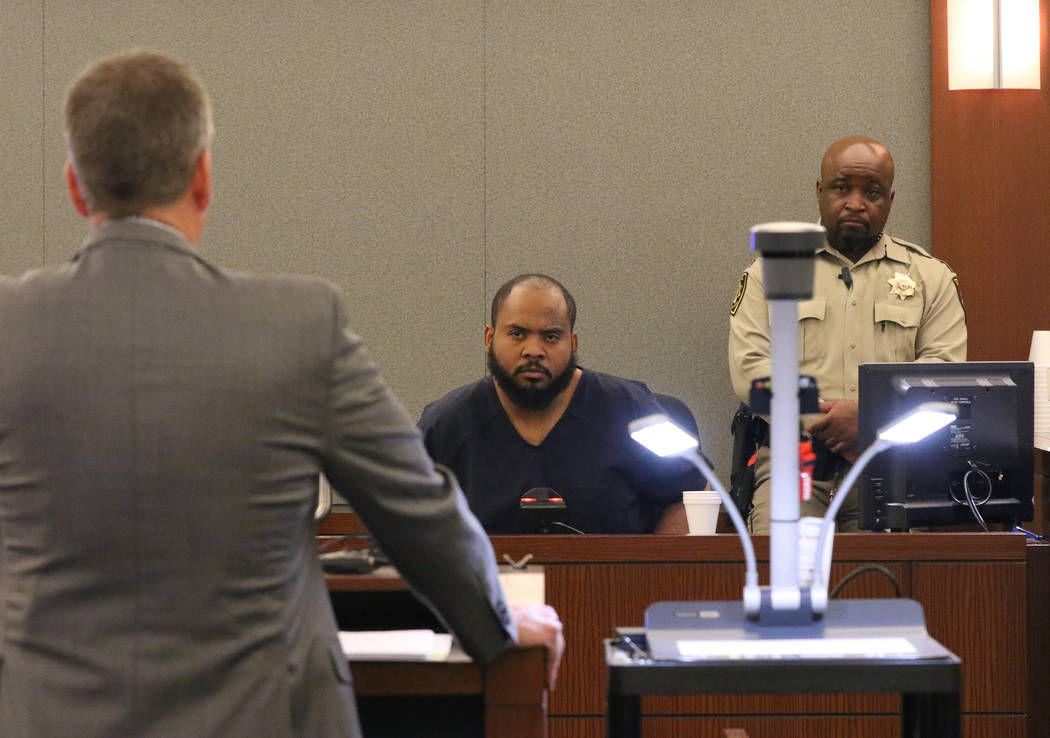 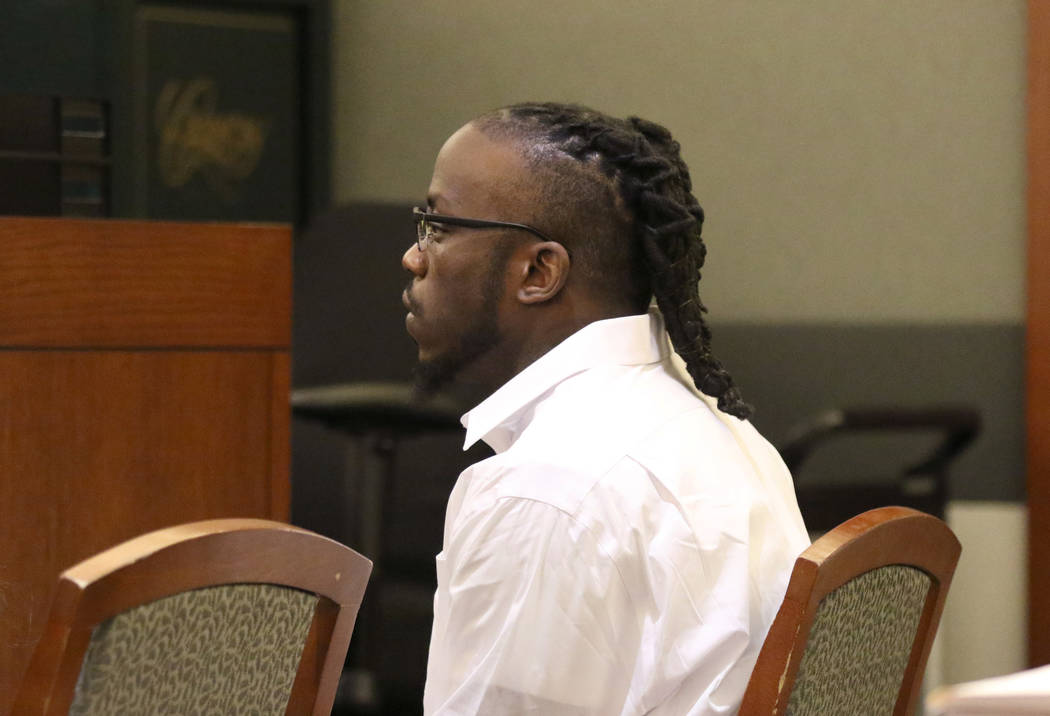 Durwin Allen, charged in the killings of Myron Manghum, 33, and Alyssa Velasco, 27, listens as Johnny Brooks, not photographed, the lone surviving victim of the shooting, testifies at the Regional Justice Center on Wednesday, Feb. 12, 2020, in Las Vegas. (Bizuayehu Tesfaye/Las Vegas Review-Journal) @bizutesfaye 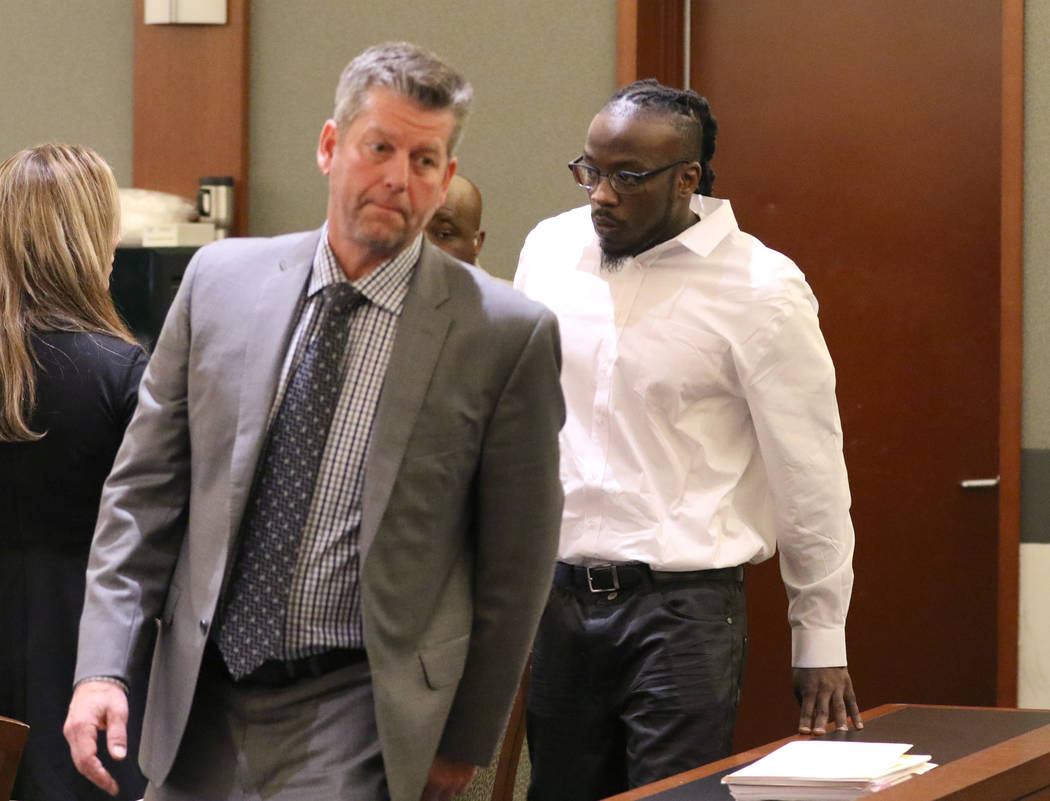 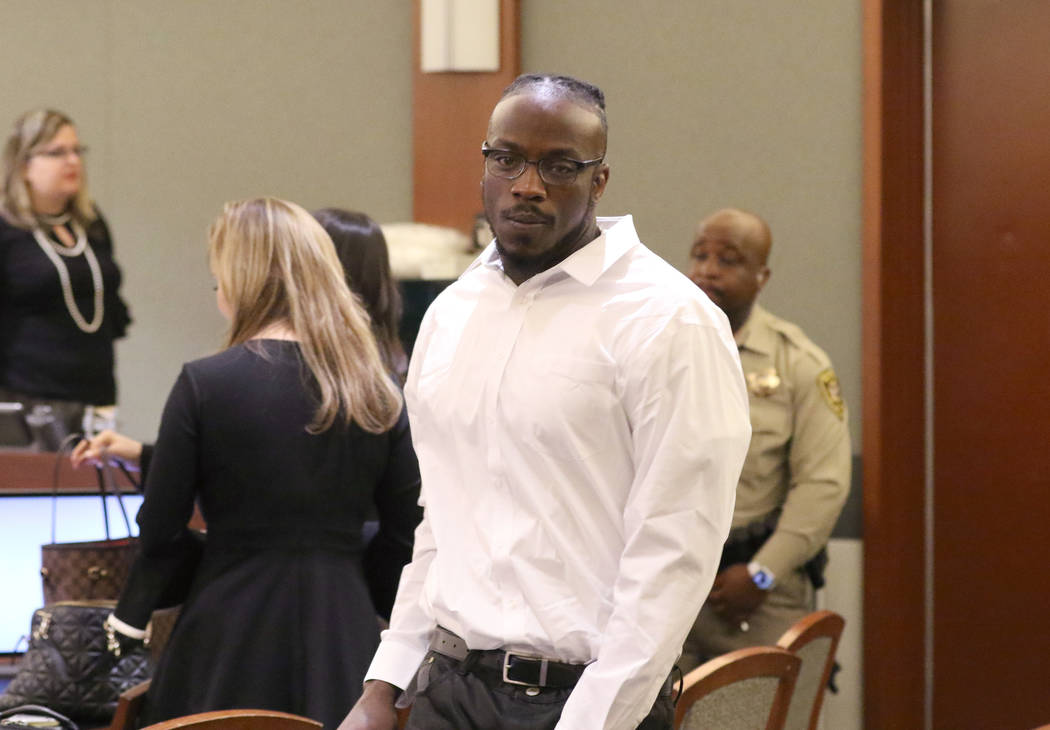 The victim shuffled to the witness stand in a blue jail jumpsuit and shackles, forced to testify about the day he was shot in a Las Vegas attack that left two others dead.

He turned toward attorneys for the defendant, Durwin Allen, who was unrestrained and seated in street clothes.

“I don’t know who shot me,” Johnny Brooks said, with Allen watching intently from across the courtroom.

The prosecutor asked Brooks if he recalled telling detectives that Allen looked at him, aimed his weapon and fired.

If convicted of the killings, Allen could be sent to death row.

The last time Allen, 34, appeared before District Judge Michael Villani, he was the one in jail garb and shackles, surrounded by Clark County Detention Center officers. But he was ordered released on house arrest after prosecutors had trouble finding Brooks for Allen’s trial last month and asked to postpone the case.

On Wednesday, Allen walked freely in and out of the courtroom, wearing black-framed glasses, a white button-down shirt, black pants and white gym shoes.

Villani ordered Brooks to testify through a deposition, without jurors present, after he was arrested in Texas last week on what’s known as a “material witness warrant.” Prosecutors are unsure whether he would show up to testify before a jury, where detectives likely would relay what Brooks told them.

Brooks, 29, initially told investigators that he was struck, ran toward the door of the apartment, and was shot again before a woman in the back bedroom, Alyssa Velasco, screamed. Authorities have said Allen and another attacker, Terrell Stewart, 34, rushed toward her, and she was killed while Brooks lay bleeding in the kitchen.

Facing Allen in a courtroom for the first time, Brooks struggled with his memory of the day 27-year-old Velasco and 33-year-old Myron Manghum died. Brooks, who has a 2013 conviction for assault with a deadly weapon, was the only shooting victim who survived the attack.

“Do you remember telling police that you had to fake your own death?” Pieper asked Brooks.

For more than an hour, Brooks told the prosecutor and attorney Peter S. Christiansen, who represents Allen, that he could not recall most details.

The prosecutor asked whether he told police that Velasco’s scream likely saved his life.

“Not that I remember,” Brooks said.

“Do you remember telling police that you were running for your life?” Pieper asked.

But as the prosecutor showed him a photo of the blood-spattered walls inside the apartment, Brooks told the judge: “Yes, that’s where I was shot.”

After Christiansen showed Brooks a photo lineup of six men that included the defendant, Brooks struggled to point out Allen. Prosecutors said that when questioned by police, Brooks circled Allen in the lineup.

Allen is due back in court next week, when Villani is expected to set a new trial date.

Late Wednesday morning, the lawyers wrapped up their examination of Brooks, and a bailiff directed him toward a back door of the courtroom.

“Mr. Brooks, you are excused,” the judge said. “You are to be immediately released from this case and from custody.”