Lawyers for Henry Ruggs claim that turning over his medical records and allowing health professionals to testify on the former Raiders player's care would violate doctor-patient privilege. 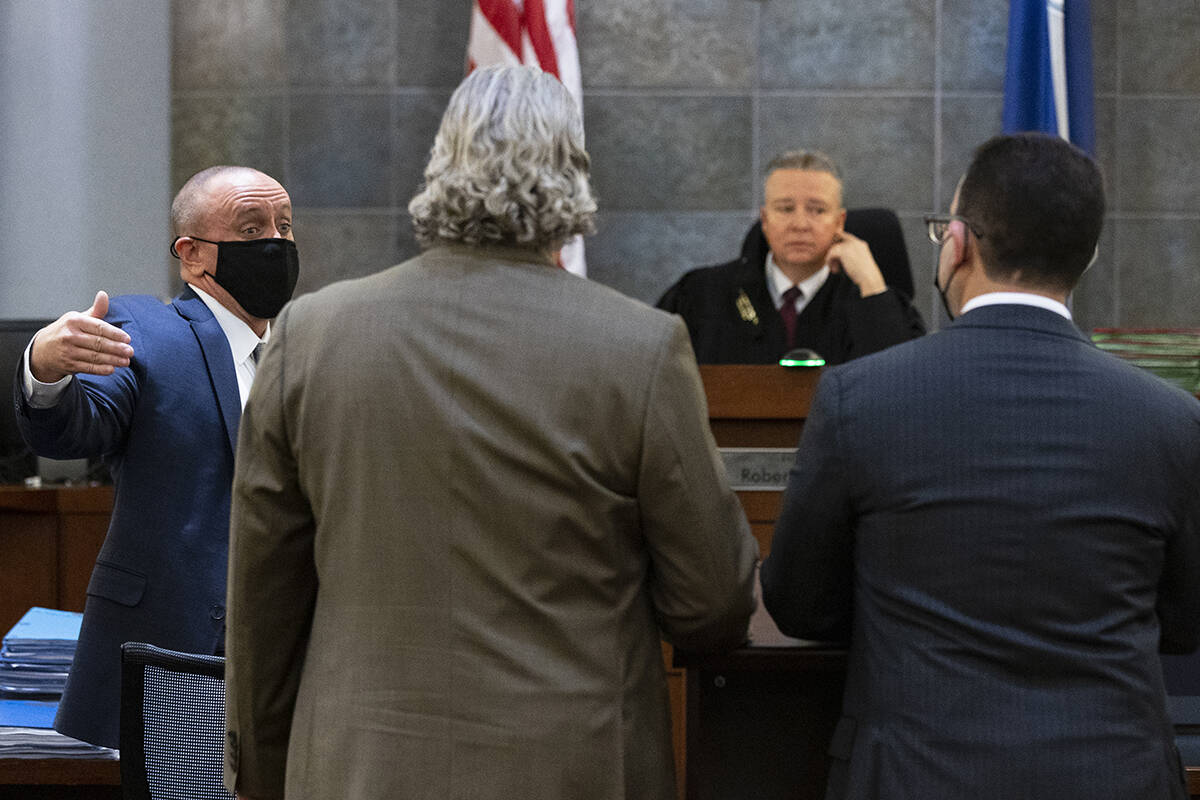 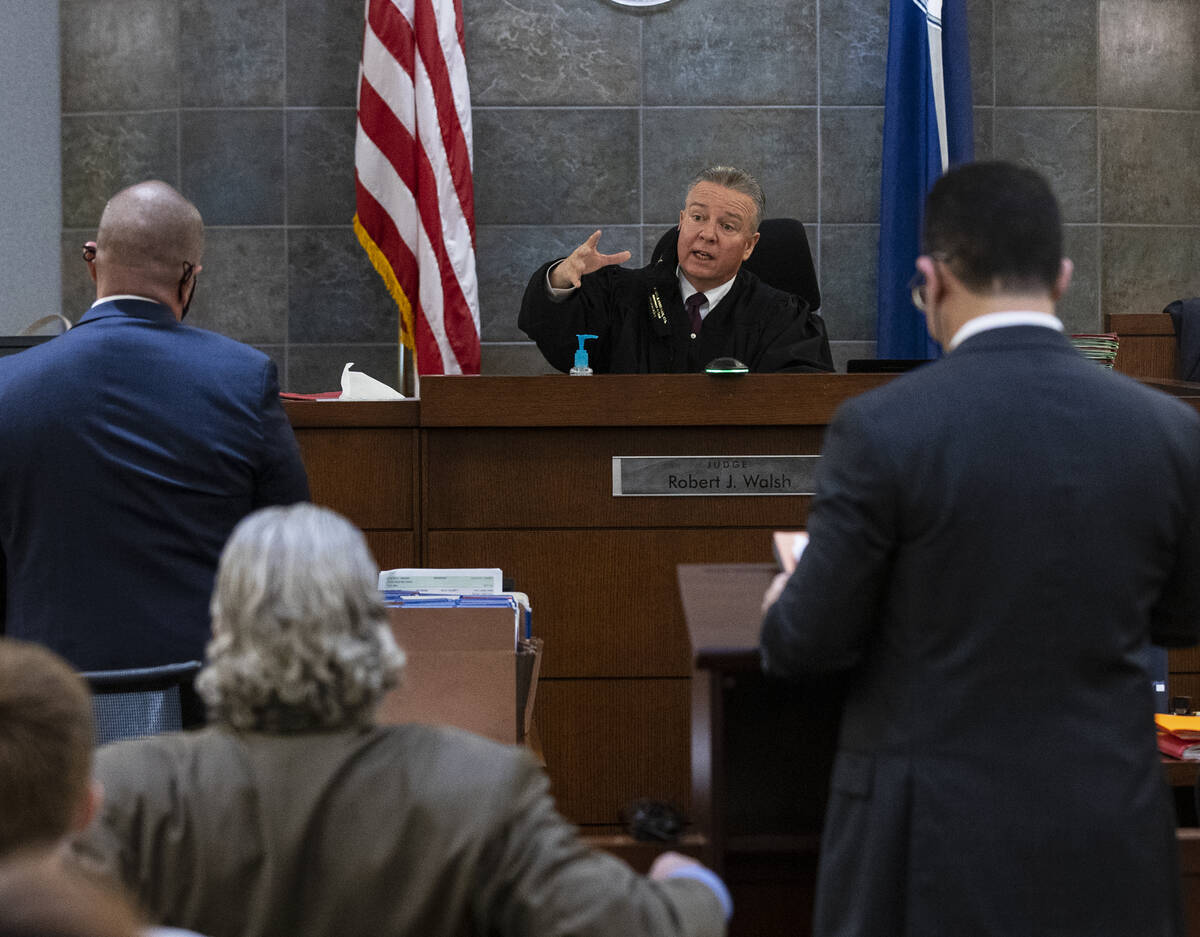 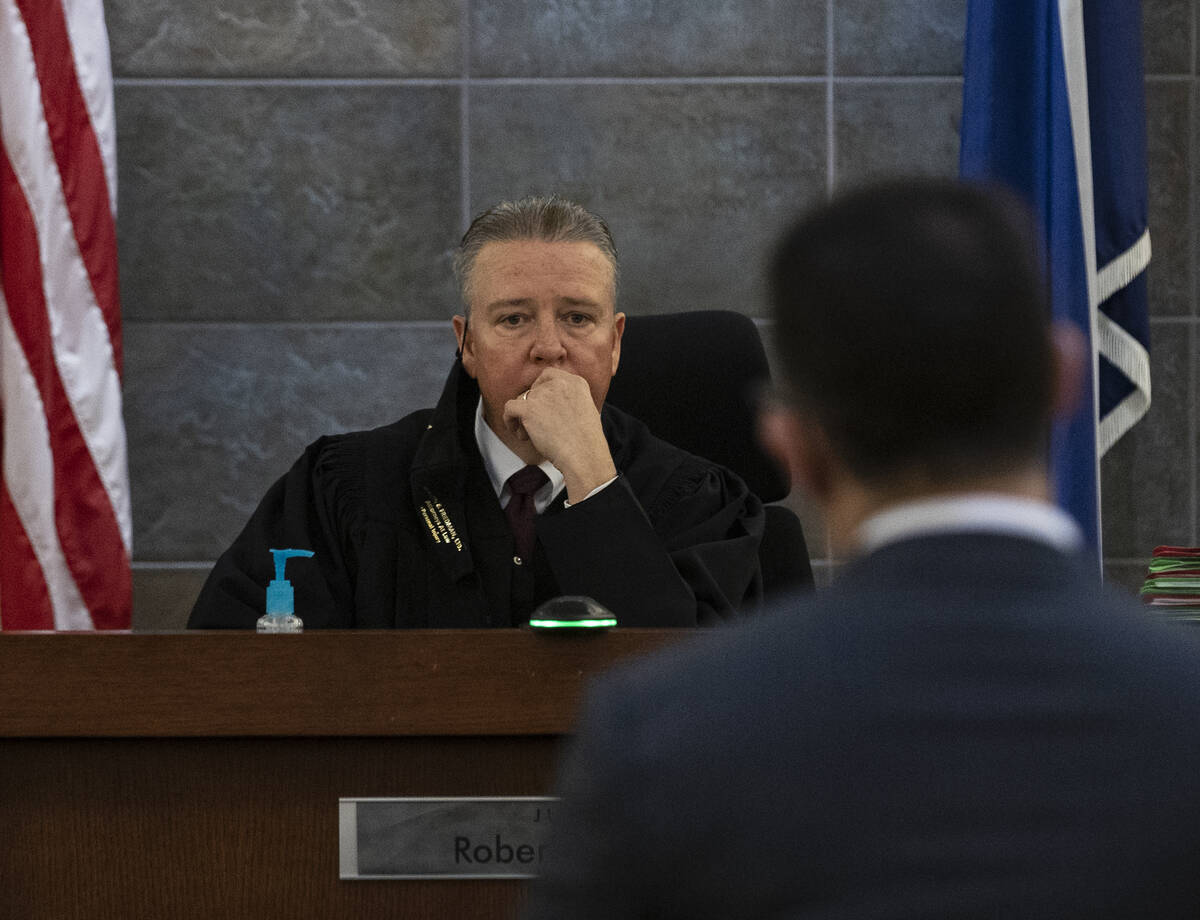 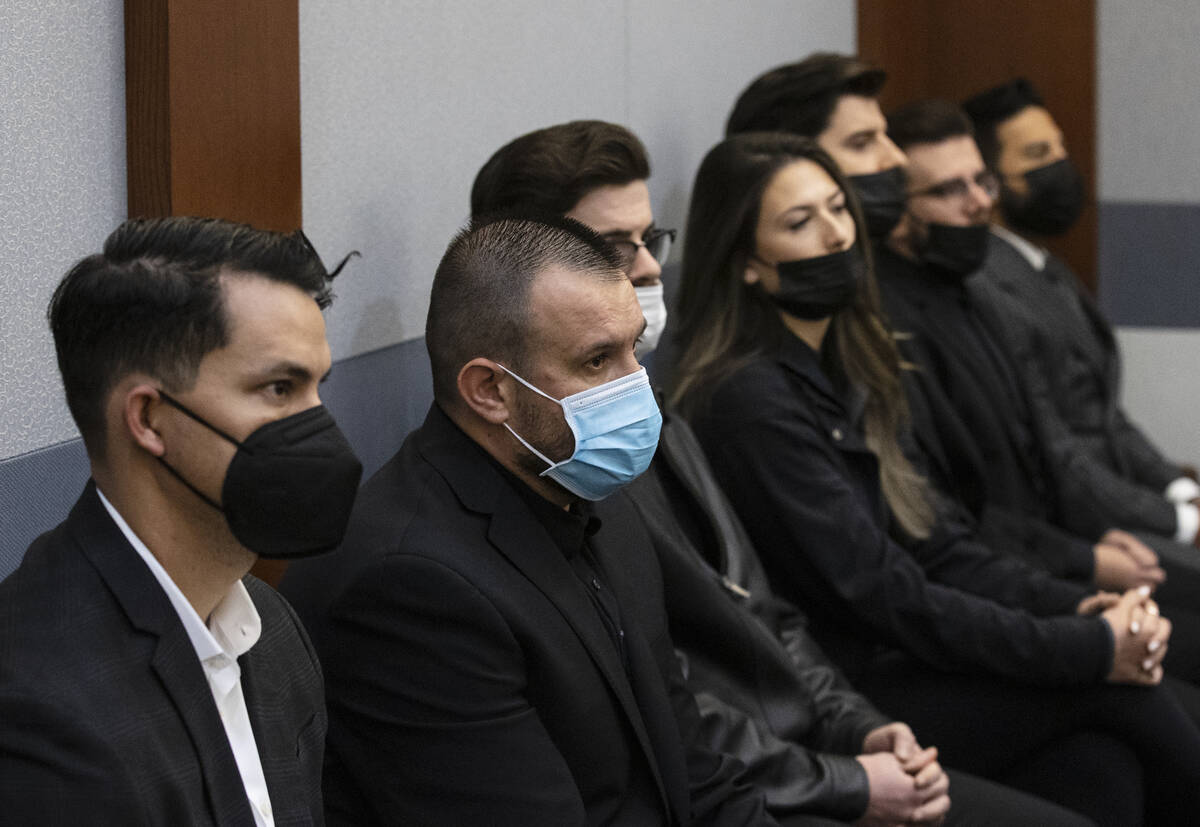 Family members of victim Tina Tintor sit in the courtroom at the Regional Justice Center on Wednesday, Dec. 8, 2021, in Las Vegas. Las Vegas judge is set to decide on Wednesday if prosecutors will be able to access Henry Ruggs’ medical records or call medical professionals to testify about the former Raiders’ player’s care. (Bizuayehu Tesfaye/Las Vegas Review-Journal) @bizutesfaye

Family members of victim Tina Tintor sit in the courtroom at the Regional Justice Center on Wednesday, Dec. 8, 2021, in Las Vegas. Las Vegas judge is set to decide on Wednesday if prosecutors will be able to access Henry Ruggs’ medical records or call medical professionals to testify about the former Raiders’ player’s care. (Bizuayehu Tesfaye/Las Vegas Review-Journal) @bizutesfaye 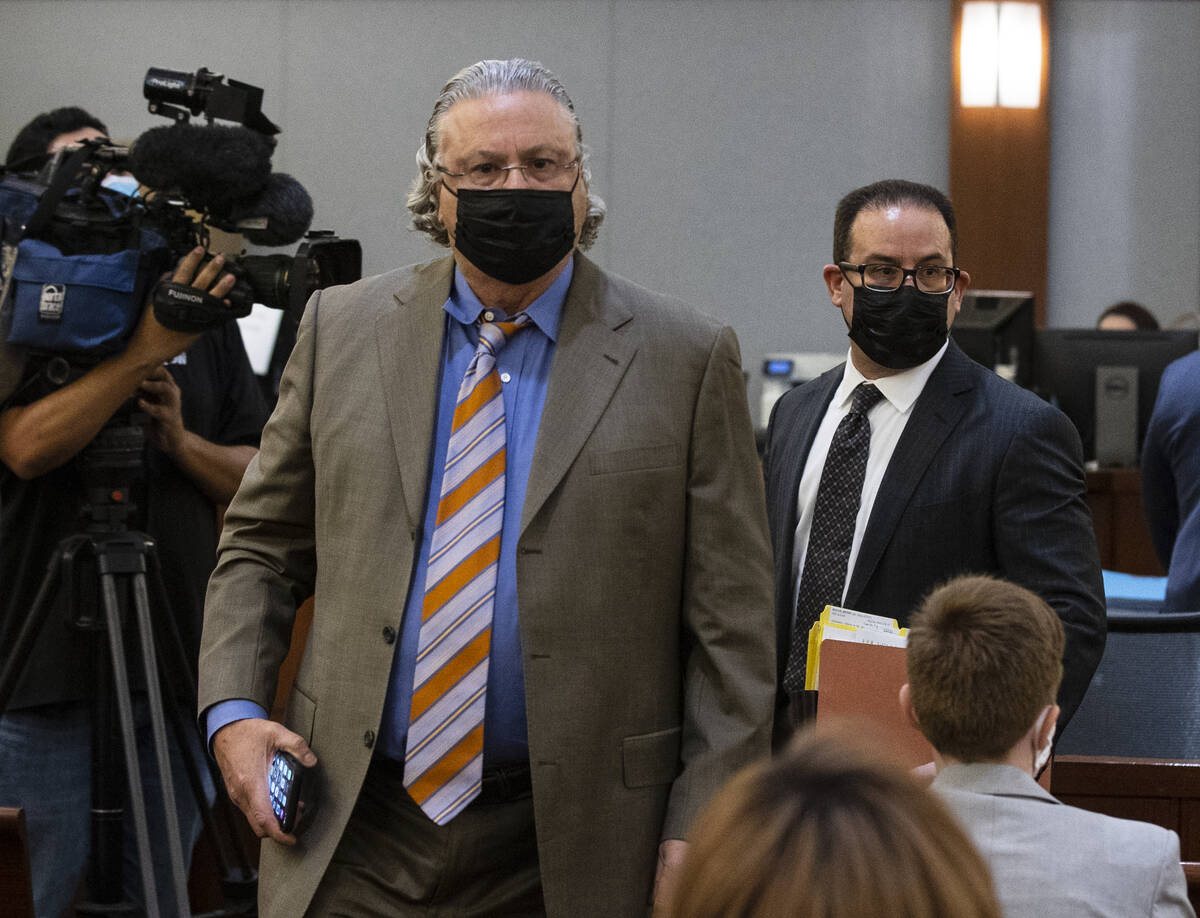 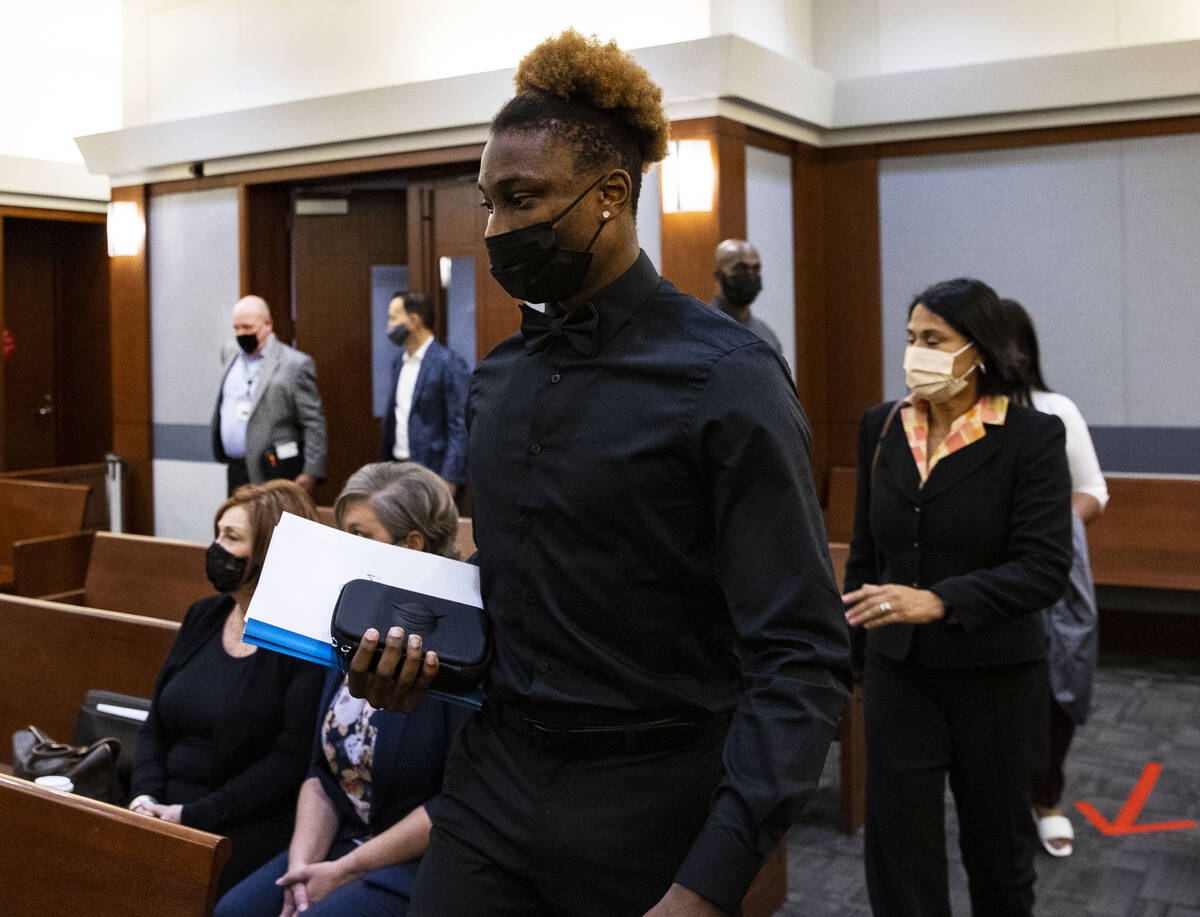 Henry Ruggs, former Raiders wide receiver, arrives at the courtroom for a hearing at the Regional Justice Center on Nov. 22, 2021, in Las Vegas. He is accused of DUI resulting in death. (Bizuayehu Tesfaye/Las Vegas Review-Journal) @bizutesfaye

A Las Vegas judge is set to decide on Thursday if prosecutors will be able to access Henry Ruggs’ medical records or call medical professionals to testify about the former Raiders player’s care.

Ruggs’ defense attorneys, David Chesnoff and Richard Schonfeld, have claimed that releasing the records and allowing the testimony would violate doctor-patient privilege.

Although Las Vegas Justice of the Peace Robert Walsh initially said he would make a decision on Wednesday, defense attorneys said they expect an order to come Thursday. Another hearing is scheduled for Thursday morning, court records show.

“I agree that the order is broad, over broad, and I believe it needs to be limited,” Walsh said during Wednesday’s hearing.

He also is charged with a misdemeanor count of possession of a firearm while under the influence, court records show. Authorities have said a loaded weapon was found in his Chevrolet Corvette Stingray after the crash.

Christiansen was not present at the Wednesday morning hearing.

Schonfeld said that while Nevada law allows for the release of Ruggs’ blood test results, the order from prosecutors filed Nov. 4 should not have requested the testimony from medical professionals.

“The order should be withdrawn, at minimum … where it allows for testimony must be stricken,” Schonfeld said.

Prosecutor Eric Bauman said Wednesday that he would only want to call testimony from medical professionals who would be able to provide context and explain the procedure of Ruggs’ blood test.

In court filings opposing the order, Schonfeld and Chesnoff wrote that patients would be “hesitant to interact candidly and openly with medical professionals if they knew that conclusions drawn from those interactions could be used against them in future legal proceedings.”

After Ruggs’ first court appearance on Nov. 3, Clark County District Attorney Steve Wolfson said he was told that Ruggs had suffered leg injuries and that Washington had suffered a “significant” wrist injury. Ruggs first appeared in court in a wheelchair and wearing a neck brace.

In previous filings, defense attorneys argued that the Las Vegas Justice Court does not have the jurisdiction to order criminal discovery prior to a preliminary hearing, which is when a judge determines if there is enough evidence for someone to stand trial. However, prosecutors wrote, that rule only applies to defendants seeking the discovery of new evidence prior to a preliminary hearing.

“To suggest that this court lacks jurisdiction would be tantamount to suggesting that neither party can subpoena witnesses and compel their presence, an act which is authorized by the Justice Court for the purpose of preliminary hearings,” prosecutors wrote in court documents filed Nov. 3o.

Ruggs was reportedly driving 156 mph just seconds before the fiery pre-dawn crash. Prosecutors have said his blood alcohol level was 0.16 percent, twice the legal limit for drivers in Nevada, after the crash.

He could face up to 40 years behind bars if convicted of the DUI counts.