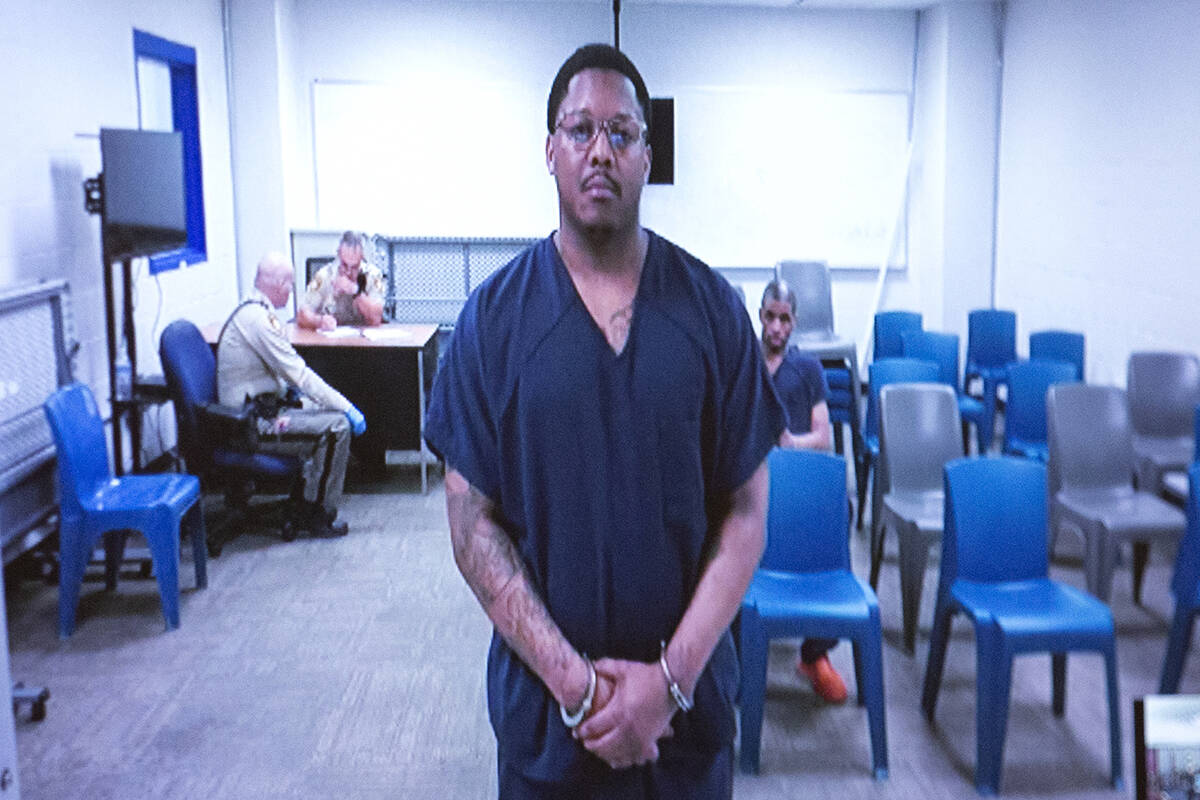 Michael Mosley, who pleaded guilty to murder and robbery charges, attends a sentencing hearing through a video call at the Regional Justice Center on Friday, April 1, 2022, in Las Vegas. Mosley, who was sentenced to at least 12 years in prison, is one of the suspects who was accused of fatally shooting a Las Vegas-area rapper and pawning his jewelry in October 2019. (Ellen Schmidt/Las Vegas Review-Journal) @ellenschmidttt

A man was sentenced on Friday to at least 12 years in prison for the 2019 fatal shooting and robbery of a Las Vegas-area rapper.

Michael Mosley, 30, was one of three men arrested in the killing of 40-year-old Ronnie Cravens Jr., a rapper known as Succeed Phlyguy, during a home invasion in Henderson on Oct. 12, 2019.

The defendant also is identified in court records as Michael Jerome Mosely Jr.

Mosley, appearing in court through a video call, answered “no, ma’am” when District Judge Jacqueline Bluth asked if he wanted to speak during his sentencing hearing.

Bluth sentenced Mosley to between 12 and 30 years behind bars. Chief Deputy Special Public Defender Patricia Palm declined to comment on the case.

Mosley was arrested Jan. 15, 2020, more than two months after the arrest of his co-defendant, 27-year-old Angell Fernandez. A third suspect in the case, 40-year-old Wahid Briley, was arrested April 3, 2020.

Both men are scheduled to go to trial on April 18.

According to an arrest warrant, two masked men broke into Cravens’ home where he lived with roommates on the 2900 block of Clarity Court, near Eastern Avenue and St. Rose Parkway.

One of Cravens’ roommates exchanged gunfire with Fernandez, police said. A roommate was shot in the leg, and Cravens was shot multiple times. The rapper died on his living room floor from gunshot wounds, the Clark County coroner’s office has said.

Police have said Cravens also was robbed of jewelry. Investigators identified Mosley while looking through a pawn search database.

Mosley pawned a $48,000 Arkansas Razorbacks pendant owned by Cravens at a pawn shop in San Francisco three days after the killing, the warrant said.

Police have said the suspects had pizzas delivered to Cravens’ home weeks ahead of the break-in and shooting. Investigators believe the deliveries were designed to gather intel on Cravens’ schedule. Police documents also indicated that the home invasion was the work of at least three people.