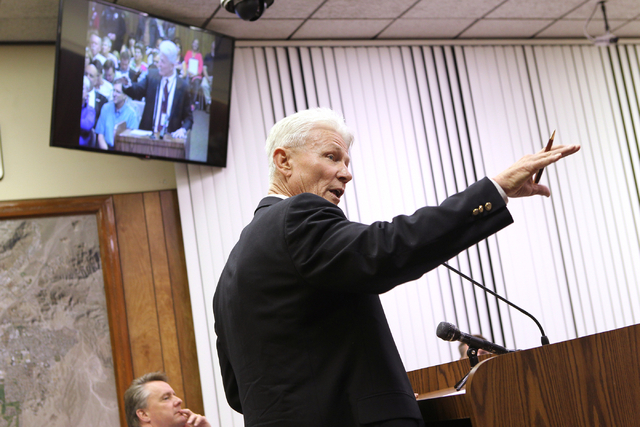 The Clark County District Attorney’s office has charged former Boulder City Police Chief Bill Conger with the misdemeanor crime of “failure to perform a duty” in connection with dropping an animal cruelty case against his former employee.

In April 2015, a criminal investigation found Mary Jo Frazier, then Boulder City’s animal control supervisor, had needlessly killed dozens of shelter animals for years. People who worked with her told a detective Frazier killed the animals for fun. Despite the detective’s findings, Conger dropped the case and let Frazier retire.

The scandal at the shelter has rocked the “Home of Hoover Dam” since December 2015, when the Review-Journal reported that the case had been dropped. Residents of the 15,000-person city came forward with horror stories about Frazier, and the city reopened the case. Frazier now faces two counts of animal cruelty charges. Frazier’s attorney has said in court that the former animal control supervisor is adamant about her innocence.

Conger quit amid the scandal after his staff went to the city’s human resources department and accused him of lying about when his staff came to him about Frazier. Conger’s departure was so abrupt, the city manager learned about it from a reporter.

The complaint, filed Tuesday by the district attorney’s office, argues Conger’s decision to direct his employees not to submit “substantiated felony animal cruelty charges” to its office was “contrary to the form, force and effect of Statutes.”

Conger told the Boulder City Review he was represented by attorney Tom Pitaro. Pitaro could not be reached for comment.

Conger has said he opened the April criminal investigation into Frazier as soon as he heard allegations about her. Boulder City police staff contradict that claim.

Animal Control Officer Ann Inabnitt testified she went to Conger in spring 2014 after she saw Frazier use the shelter to brutally kill Frazier’s own dog, according to grand jury testimony from the criminal case against Frazier.

Boulder City Detective David Olson and Sgt. Aaron Johnson both testified Conger told them the criminal case against Frazier would be used as a “poker chip.”

Conger told the Review-Journal in December that he felt felony charges had been an overreach and that Frazier retiring made the whole thing moot.

“People get in trouble and resign all the time,” Conger said.

An unnamed spokesperson for the district attorney’s office said in an email that no one was available to discuss the case.

“News to me,” Boulder City spokesman JC Davis said in an email when asked about the charge against Conger. Davis, who was hired in response to the scandal, had told the Review-Journal on March 21 that three investigations into the shelter by Boulder City Police had found no evidence of criminal wrongdoing on Conger’s part.

City Manager David Fraser has barred the Review-Journal from speaking to any employees involved in the case.