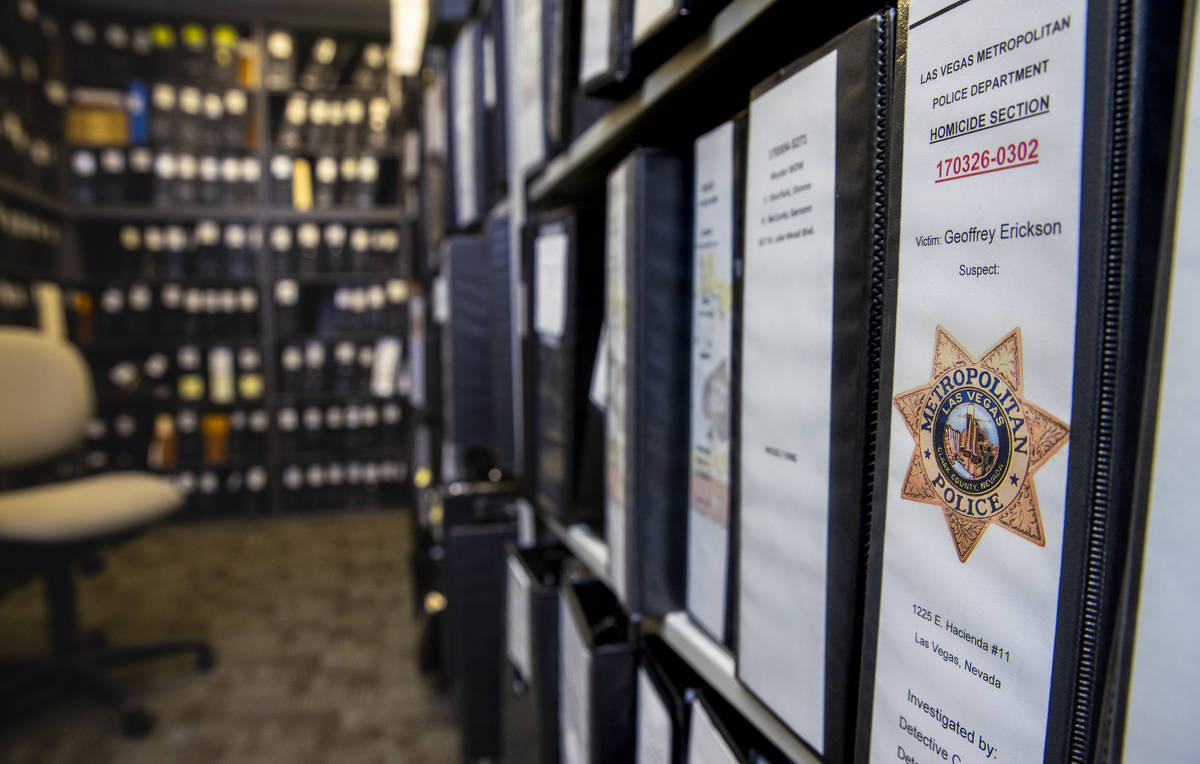 Some of the many binders of cold cases within a storage room in Metro's homicide unit on Wednesday, March 24, 2021. (L.E. Baskow/Las Vegas Review-Journal) @Left_Eye_Images 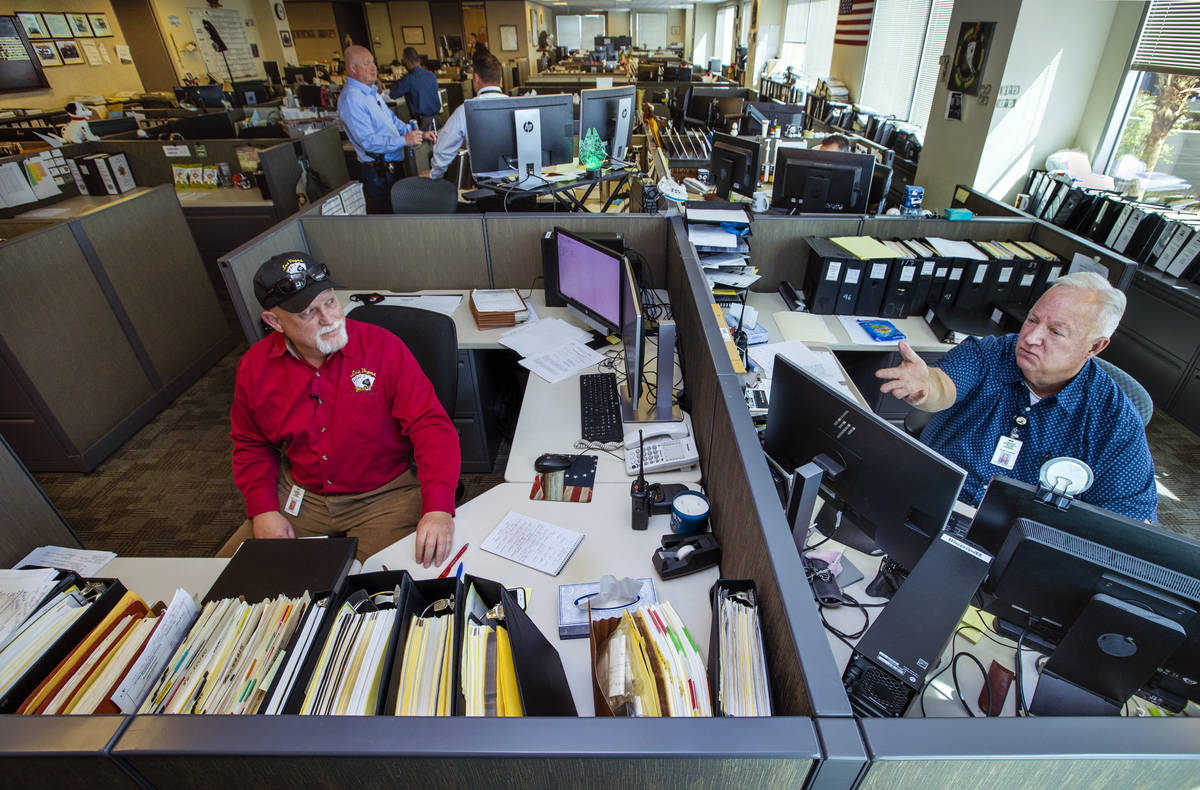 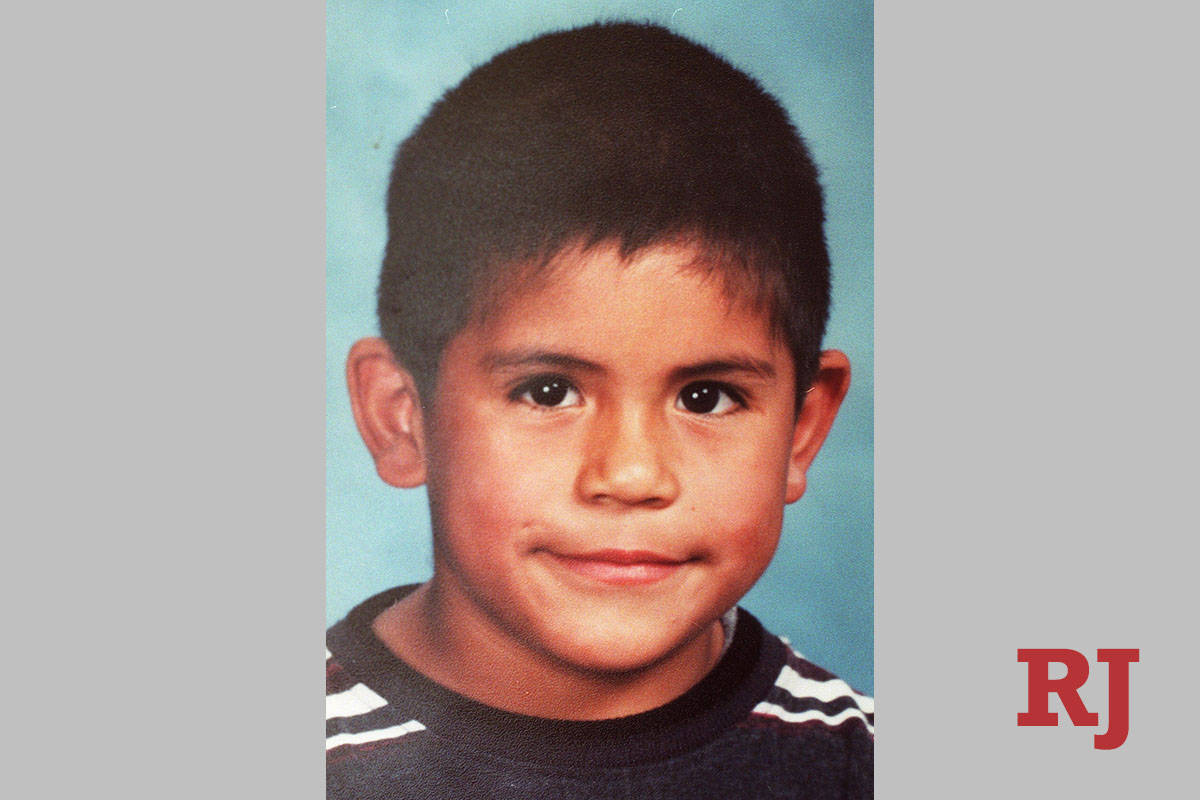 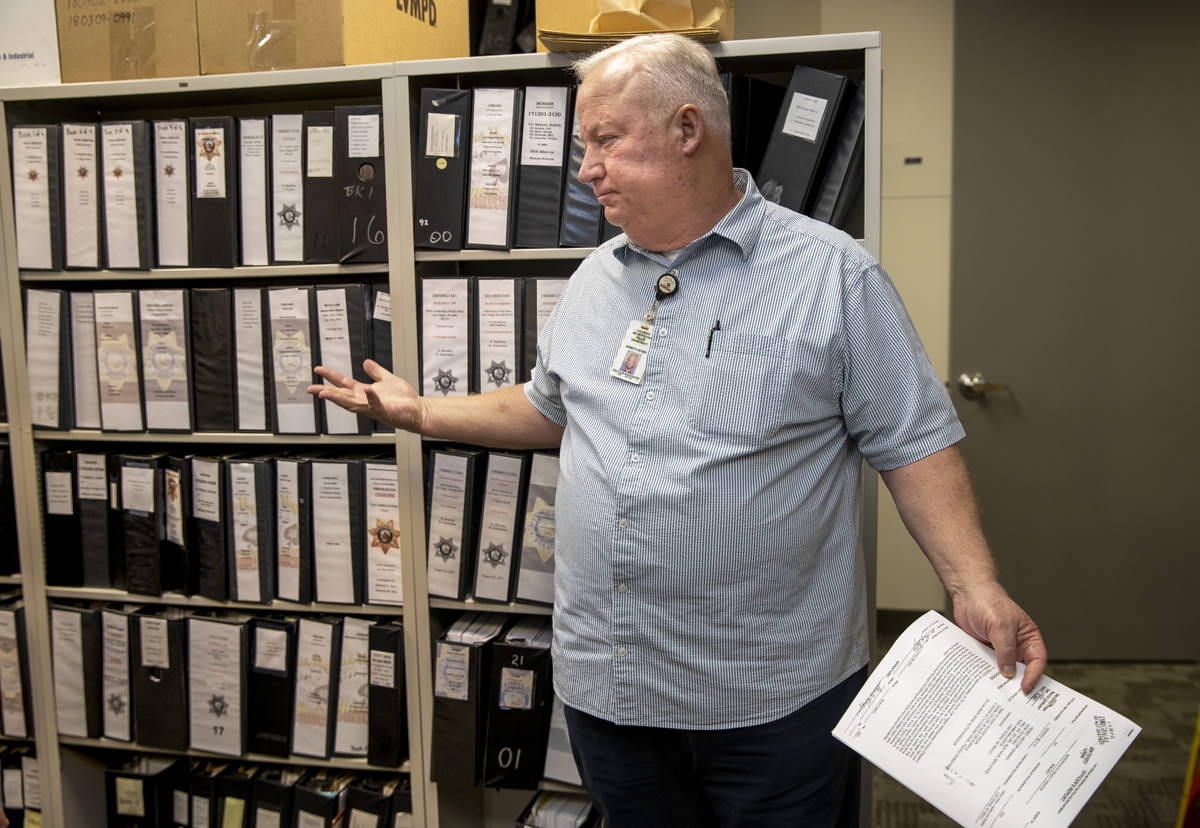 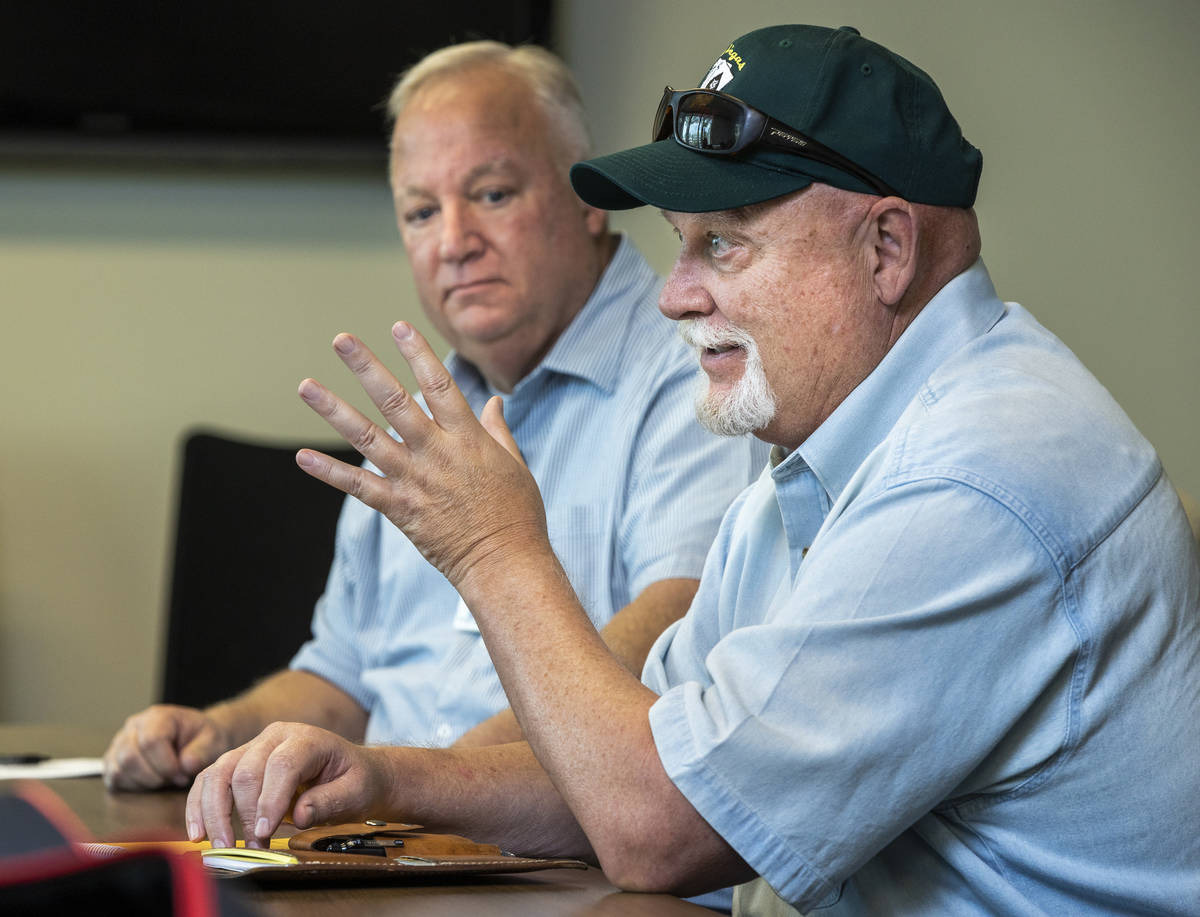 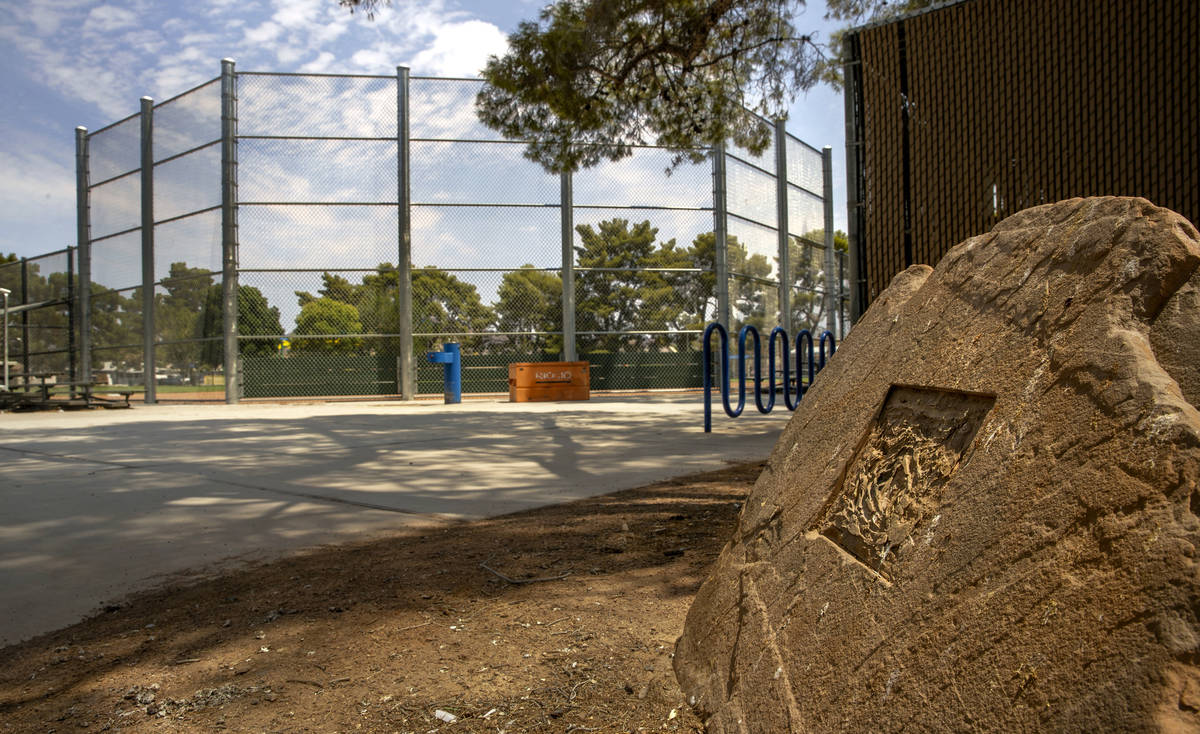 Rock with a missing plaque for Hector Perez who was fatally shot near the ball field at Maslow Park in a drive-by shooting in 2001 on Thursday, Aug. 12, 2021, in Las Vegas. (L.E. Baskow/Las Vegas Review-Journal) @Left_Eye_Images 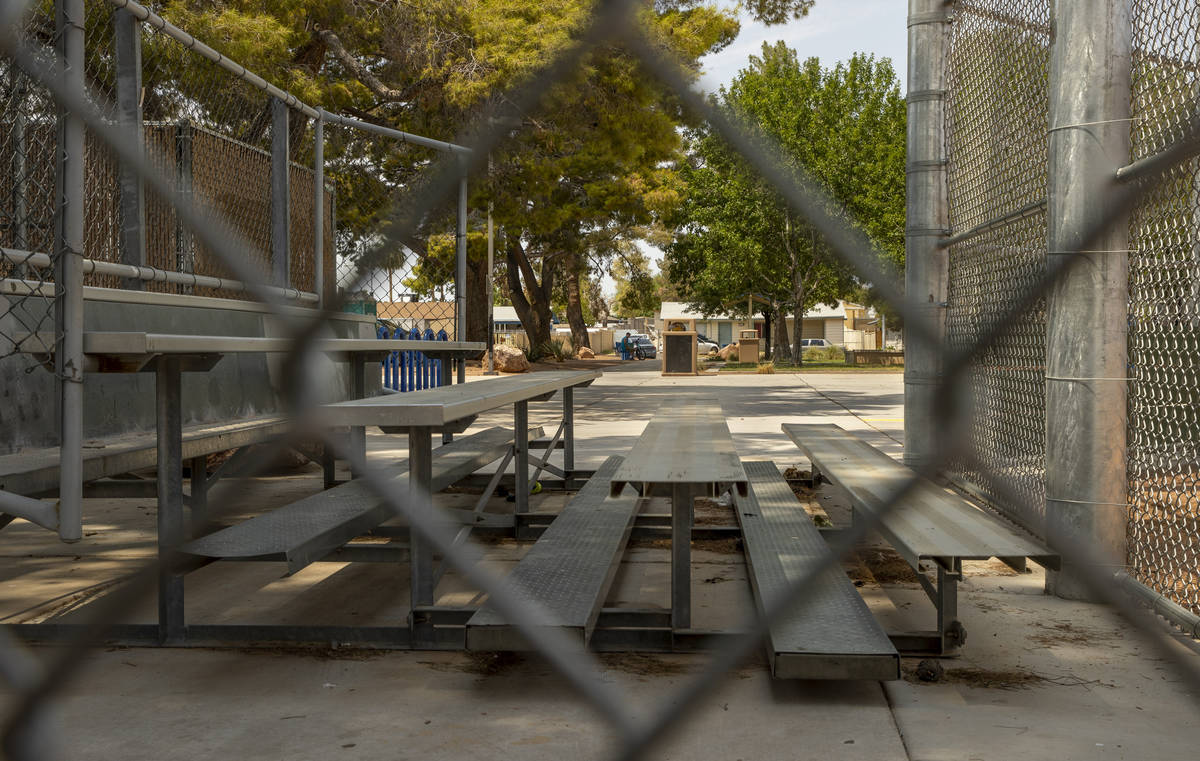 The ball field at Maslow Park near where Hector Perez was fatally shot near in a drive-by shooting in 2001 on Thursday, Aug. 12, 2021, in Las Vegas. (L.E. Baskow/Las Vegas Review-Journal) @Left_Eye_Images 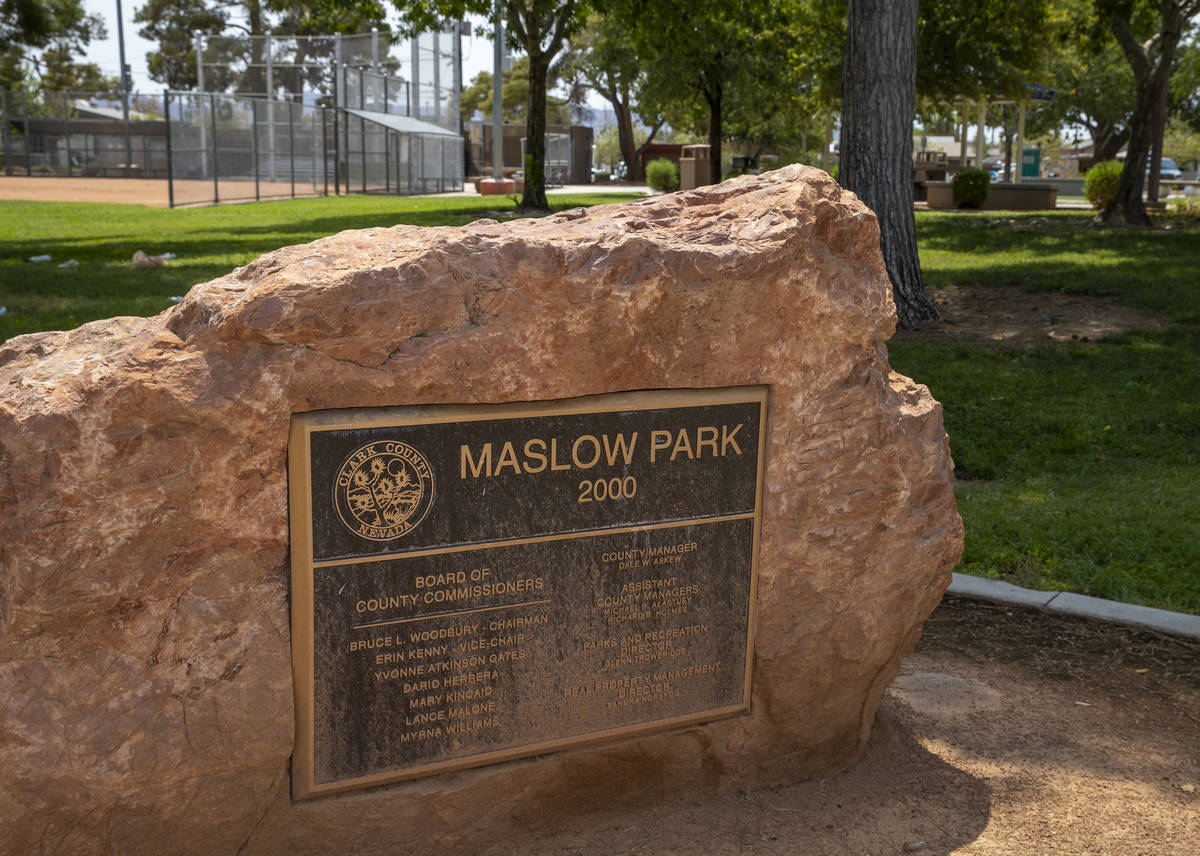 A plaque at Maslow Park near the ball park where Hector Perez was fatally shot near in a drive-by shooting in 2001 on Thursday, Aug. 12, 2021, in Las Vegas. (L.E. Baskow/Las Vegas Review-Journal) @Left_Eye_Images 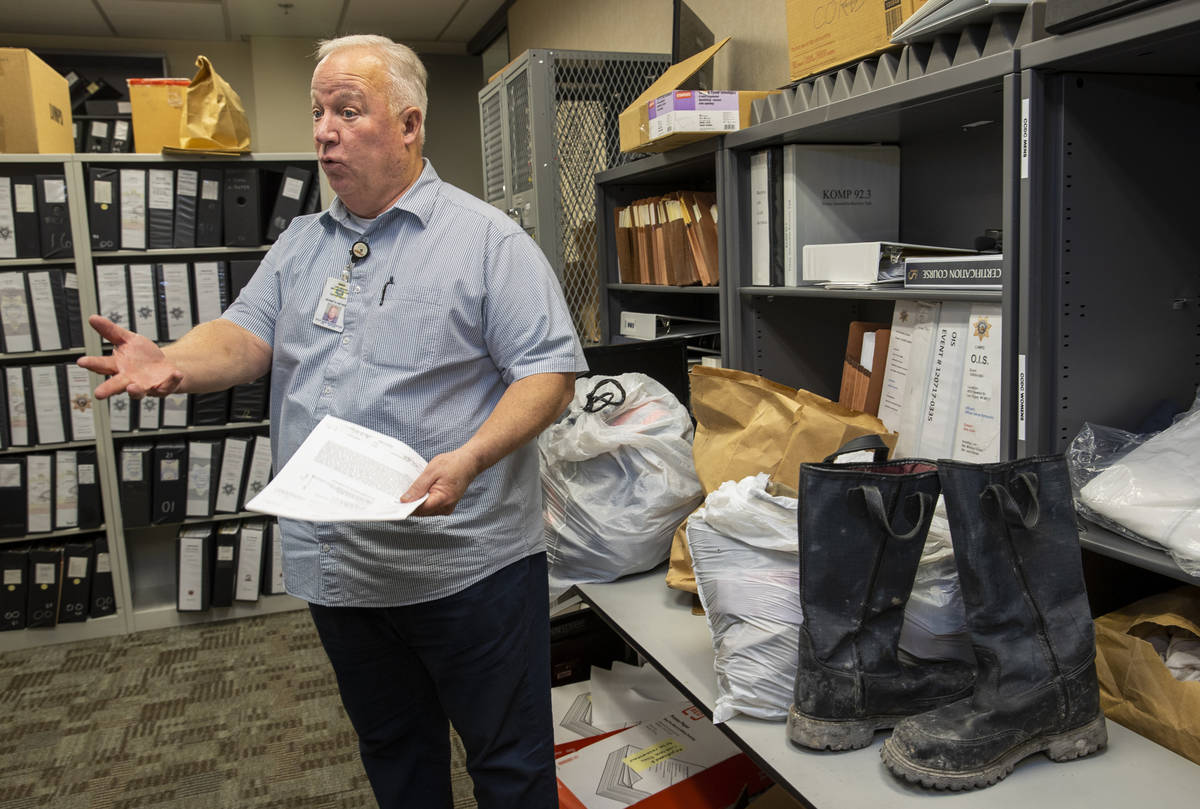 Metro Cold Case Detective Kenneth Hefner amongst the many binders of cold cases and other items within a storage room in the Metro Homicide Squad on Wednesday, March 24, 2021. (L.E. Baskow/Las Vegas Review-Journal) @Left_Eye_Images 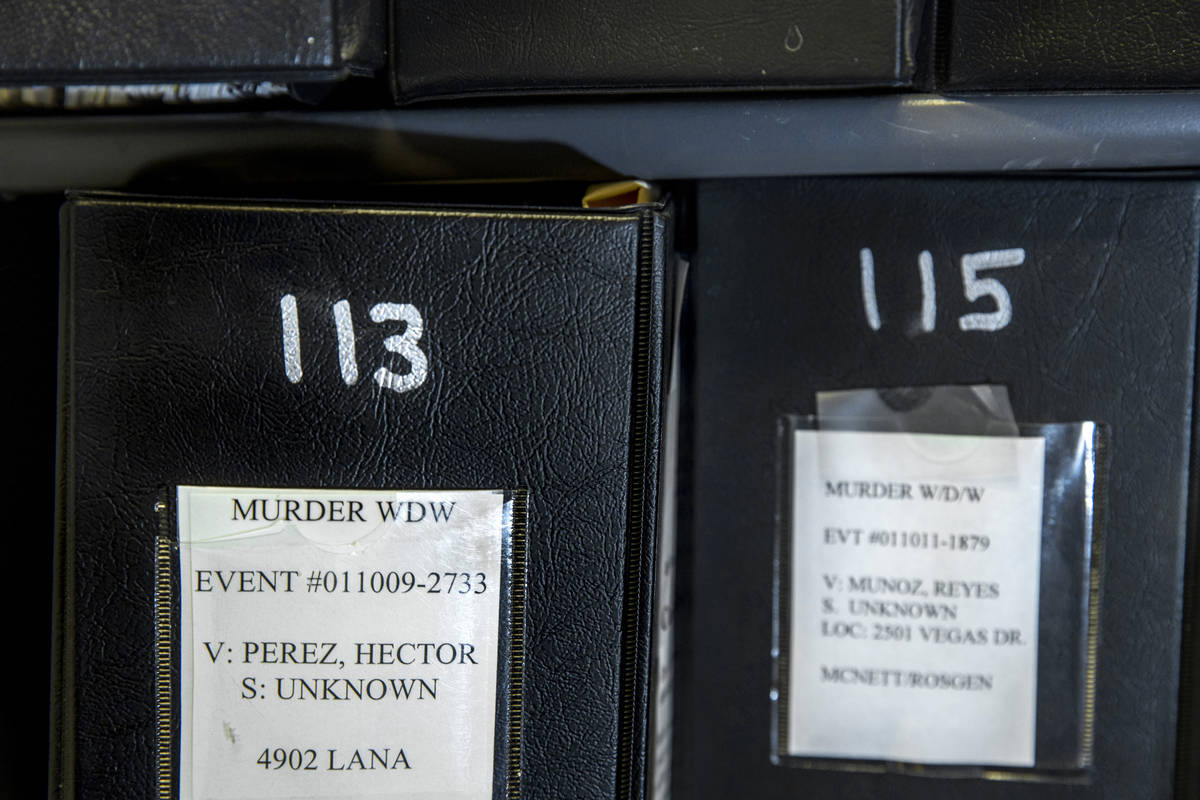 Cold case binders for the Hector Perez investigation amongst the many others within a storage room in the Metro Homicide Squad on Thursday, July 22, 2021. (L.E. Baskow/Las Vegas Review-Journal) @Left_Eye_Images

Little Hector Perez was hanging out on the baseball bleachers of Maslow Park with a group of about 15 kids when the car pulled up.

It was a calm, October night in 2001. The dark-colored Dodge Neon with four people inside rolled by at around 9:15 p.m. Someone pointed a gun out of a tinted, passenger window and opened fire.

The children scattered as roughly half a dozen bullets whizzed through the evening air. When they returned after the car left, they found 9-year-old Hector slumped over with a gunshot wound to his chest, police said. The fourth grader died at University Medical Center.

Witnesses did not get a good look at the shooter. Some did not talk to police. Investigators suspected gang involvement. About a month and a half later, then-homicide detective Sheila Huggins worried that the case would never be solved.

“Random acts of violence are so hard to follow up,” Huggins told the Las Vegas Review-Journal in November 2001.

Nearly 20 years later, the case remains open. It haunts Huggins to this day.

Metro’s cold case unit is made up of five retired homicide detectives who work part-time on their pension to investigate unsolved killings, including Hector’s.

Dan Long and Ken Hefner, who have been with the unit for 2.5 and 6 years, respectively, said there are common misconceptions about what makes a case “cold.” It does not get that distinction until the case’s lead detective retires. Even then, another detective may choose to take it on until they retire.

“As former homicide detectives, we know there are times where you’re more of a fireman than a detective,” Hefner said, describing working on cases that cropped up earlier in his career like putting out fires left and right.

The cold case unit affords its investigators more time to dig deep, allowing seasoned detectives with the instinct and training needed to solve a killing the freedom to work without the pressure of a constantly climbing caseload.

“The most likely thing that’s going to solve our cases is DNA,” Long said.

And advancements in technology are giving decades-old samples new promise.

The promise of DNA

Last month, Las Vegas police announced that the cold case unit had identified a suspect in the 1989 strangulation of local teen Stephanie Isaacson using a mere 15 cells of DNA evidence. It set a world record for the smallest amount of DNA ever used to help solve a crime.

The same sample had been run several times over the years through a DNA database maintained by the FBI, but never saw a match. The latest lead came from genome sequencing, a type of DNA testing that utilizes family trees and shared DNA between relatives to help identify possible suspects. The same testing identified California’s since-convicted Golden State Killer in 2018.

Now, Metro cold case detectives think another development in DNA technology called phenotyping could help solve the 2004 slaying of Theresa Insana, a 26-year-old sales executive for the Rio who was killed in her Summerlin home.

Police at the time of Insana’s death said there were no signs of forced entry at her house. Her car was still there and her purse, keys, credit cards and cocker spaniel puppy were all inside. Her remains were found a few miles away, near what was then a drainage culvert at Hualapai and Peace ways.

“She was in her house minding her own damn business and somehow, somebody comes in and kills her,” Hefner said. “She was one of those truly innocent victims.”

Carla Palazzo, Insana’s cousin, says the family has fought tirelessly to find Insana’s killer in the nearly two decades since her death. Insana’s father died in April, but her mother still calls Metro every Monday, begging them not to forget about her baby girl.

“They’ve looked into all kinds of leads, and they’ve run the DNA, but nothing ever panned out and it’s been 17 years,” Palazzo said. “It’s left a huge void in our family.”

Proponents of phenotyping say it allows analysts to “reverse-engineer” a person’s physical profile based on a DNA sample. Using the method, Metro has a composite image of what Insana’s killer may have looked like.

CeCe Moore, chief genetic genealogist at Virginia-based Parabon NanoLabs, which offers a phenotyping service to law enforcement agencies, said phenotyping isn’t used to create an exact image, but rather to provide a list of physical attributes that investigators like Hefner can use to narrow down their suspect search.

Some scientists, like Kenneth Kidd, are skeptical of the service’s credibility. Kidd, a retired Yale University genetics professor, said one of his main concerns is that Parabon NanoLabs’ research has not been published in peer-reviewed journals to validate its methods.

“As a rigorous scientist, I just can’t accept it,” Kidd said.

Moore said Parabon NanoLabs hasn’t published its work in a peer-reviewed journal because the company doesn’t want to give out proprietary information.

“They’ve spent a lot of money developing these predictions, and if you publish it in a peer-reviewed journal, you’ve just given away all of your trade secrets,” Moore said, adding that the company’s record of success speaks for itself.

Without divulging further details, Hefner said the phenotyping result has him confident Insana’s case could be solved.

Hector’s case is harder. There was no physical contact from his killer.

Police did collect DNA evidence from an unspent cartridge found at the park. But a long-awaited match could only tell investigators who loaded the weapon’s magazine, not who fired the gun, bringing detectives right back to the drawing board.

The promise of DNA has its pitfalls, too.

“You hope that someday, somebody will have the guts to say something,” Huggins, the detective who originally worked Hector’s case, said this month.

Following Hector’s death, the little boy’s family held out hope that his killer would be found. His older brother, Robert Perez, was at the park when he was shot. He told the Review-Journal in November 2001 that he had trouble sleeping at night.

Hector’s older sister, Cecilia Martinez, told the Review-Journal in 2002 that she was hopeful someone would come forward.

“It’s still hard to believe this happened,” she said at the time. “It’s hard not seeing him every morning.”

Attempts to reach the Perez family for this story were not successful.

Crime scenes from other cold cases have been lost to development, but Maslow Park still stands. A memorial marker was dedicated to Hector there on May 31, 2002 — a plaque near the ball fields where he bled out. Even that is gone now, though. Removed or stolen, but never replaced.