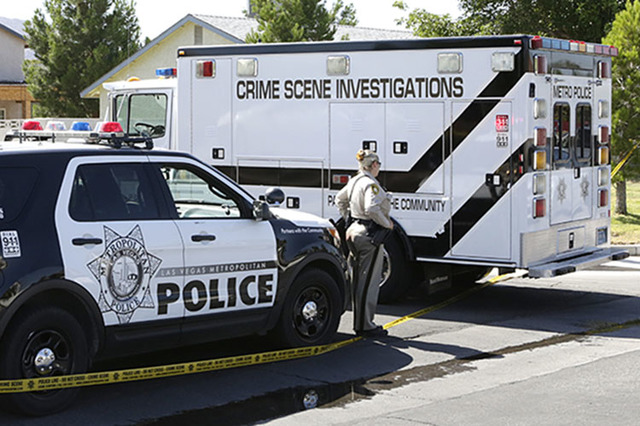 The Metropolitan Police Department investigated more homicides in 2016 than in any other year since at least 1990.

Metro’s 168 homicide investigations in 2016, which include two cases investigated in other jurisdictions within Clark County, surpassed the two most recent record-highs — when the department probed 167 homicides in 1996 and 158 in 2006.

The department was unable to provide homicide totals before 1990.

April was particularly violent — more than 20 people were slain that month, with five separate homicides occurring in just one weekend.

Clark County Sheriff Joseph Lombardo wasn’t available to comment Thursday afternoon, but he spoke about the increase during a December meeting with the Las Vegas Review-Journal’s editorial board.

“The population’s almost doubled since that time,” he said of the 1996 record. “We have to worry about population growth as it affects crime.”

Throughout the year, Lombardo has maintained that gangs — especially gang members who moved to the valley from California — played a large part in the valleywide spike in homicides in 2016. About 30 percent of the cases have some connection to gangs, he said, and 22 percent of those cases involved California transplants.

Lombardo also cited a link between 2016’s homicides and drugs, particularly methamphetamine. At least eight killings were the result of a drug deal gone wrong.

“We’re losing the war on drugs,” he said.

Lombardo undertook several several initiatives to confront the problem. He added five investigators and a supervisor to the homicide section and created problem-solving units to saturate the neighborhoods needing the most help. He seized an opportunity to lobby for additional funds to hire more patrol officers when a special session of the state Legislature was called to consider a professional football stadium deal.

“The effort to get more police officers is directly related to that,” he said of the increase in violent crime. “That’s why I pushed so hard to increase the sales tax and the revenue stream in order to hire cops.”

The department is expected to pursue aggressive hiring goals in 2017 and 2018. The goal is to have enough officers on patrol to allow the department to be more proactive and less reactionary, Lombardo said.

“Prevention has more of a direct effect on crime than us responding and conducting investigations,” he said.