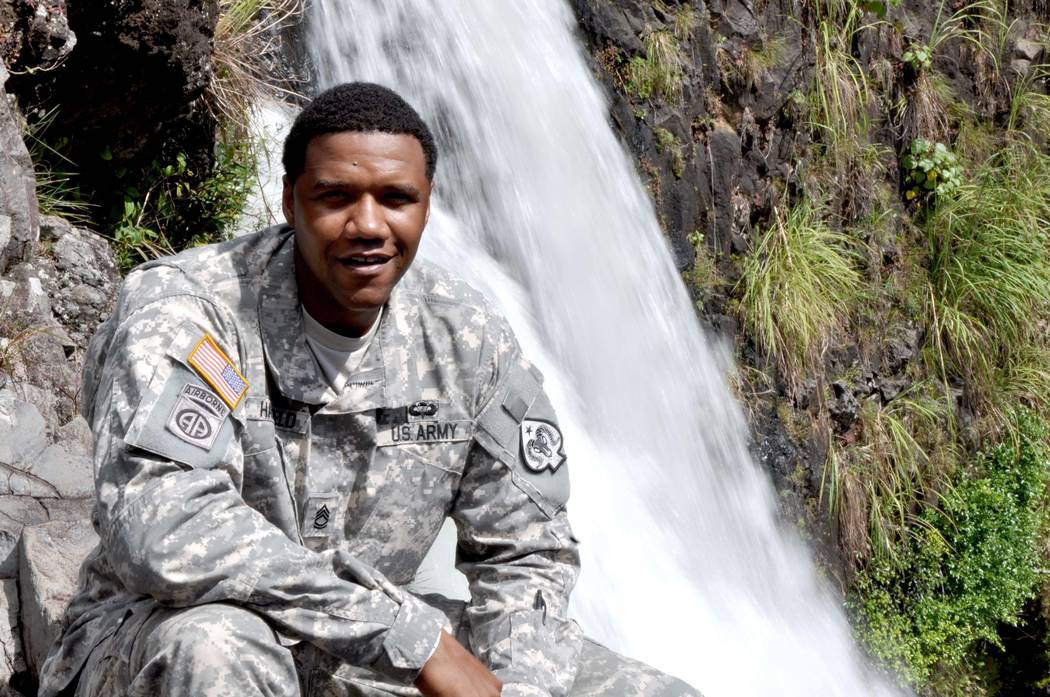 Charleston Hartfield, an off-duty Las Vegas police officer and recently published author of a memoir about life on the force, was killed Sunday night in the mass shooting on the Strip.

Hartfield, a 34-year-old military veteran known as Charles, Chucky or “ChuckyHart,” also coached youth football, said Troy Rhett, who told the Las Vegas Review-Journal the two had known each other for about eight years.

Rhett said he sent Hartfield a text message late Sunday night, “hoping he would text me back.”

“I figured he was probably busy helping others,” Rhett said. “I don’t know a better man than Charles. They say it’s always the good ones we lose early. There’s no truer statement than that with Charles. … Our hearts have just been very heavy since hearing the news.”

Reached by phone, King called Hartfield “seriously one of the nicest guys ever.” The officer had coached King’s son on the Henderson Cowboys, a boys team with the Nevada Youth Sports program.

King said Hartfield was “the most true-blue American guy” he’d ever met.

Hartfield, a married father of a son and daughter, authored a book published in July titled “Memoirs Of A Public Servant,” whose cover he used as a profile picture online.

On an Amazon page for the book, Hartfield is described as having 16 years of active military service along with 11 years in law enforcement.

The page also describes him as “a public servant from the early age of 18 who is committed to bridging the gap with no filters or shaded perceptions.”

Hartfield was a sergeant 1st class in the Nevada Army National Guard, assinged to the 100th Quartermaster Company, based in Las Vegas.

Brig. Gen. William Burks, adjutant general of the Nevada National Guard, called him “the epitome of a citizen-soldier.”

“Charleston Hartfield lived to serve the public and protect his family,” Burks said in a statement.

“Documenting the thoughts, feelings, and interactions of one Police Officer in the busiest and brightest city in the world, Las Vegas. This memoir takes you through the personal interactions experienced by a Police Officer with not only the community he seeks to serve but with his partners and their personalities. Some calls are over in an instant while others stick with you forever. Take a sneak peek into this Pandora’s box and see if perception really is reality.”

The book received 13 reviews, all with the highest five-star rating.

Rhett expressed feelings of shock and disbelief after learning that his friend had been killed.

“There’s really no solace to this other than we know Charles, and he was probably doing his best to make sure others were safe and being helped,” Rhett said. “He was just so special. He’s going to definitely be missed by many.”

“Coach Hartfield touched many lives both on and off the field,” the post read. “He was a great man who we all lost way too early. Players and alumni, Coach Chucky would want you to keep to the plan and keep moving forward. Use as motivation and inspiration; not for sadness and sorrow.”

On Monday afternoon, several people gathered outside Hartfield’s home in Henderson. One man stood in the driveway and said, “A man with a heart of gold lost his life” but declined to speak further.

Another off-duty officer, whose name has not been confirmed, was shot in the neck and shoulder. He was listed in serious condition late Monday afternoon.

“The incident on the Las Vegas Strip has devastated families and friends of victims in this terrible attack. The LVMPD is no different, and our Metro family mourns the loss of an officer and we have employees whose family members have suffered significant injury. Those families are asking for privacy during this tough time as they process and move forward through this event. They are respectfully asking for the media to let them grieve in privacy and not to contact them.”

More than 100 people, including children and coaches from the football program and their families, gathered around midfield at Ed Fountain Park on Monday evening, many holding lighted candles, some wearing the blue-and-white colors of the Cowboys.

They prayed, bowed their heads in a moment of silence for Hartfield and the other victims of the massacre, and released heart-shaped balloons over the electronic marquee that flashed the words “pray for Las Vegas” above an image of the city’s skyline.

“We could not have lost a better person,” fellow coach D.C. Stratton said. “He was an outstanding man all around.”