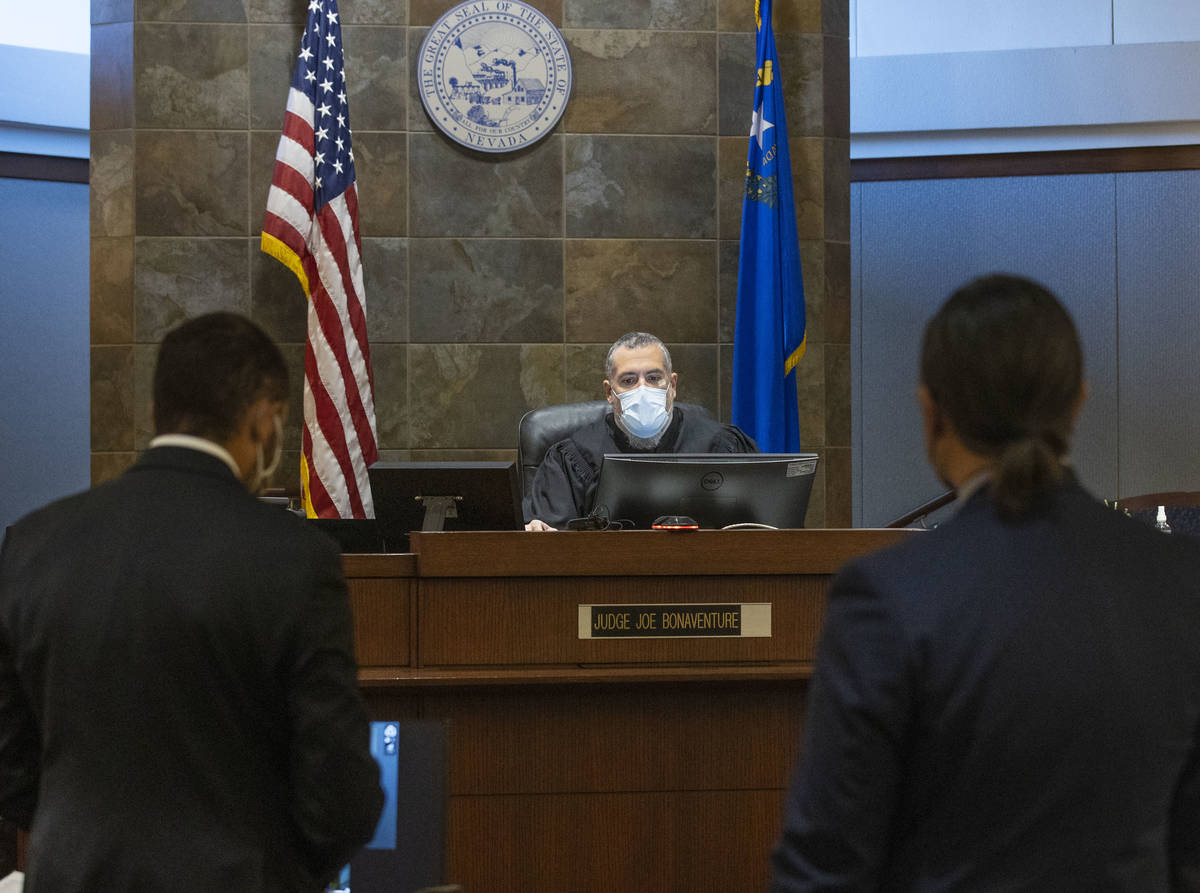 Prosecutor Christopher Hamner, left, and attorney Michael Sanft, representing Sierra Halseth, charged in the killing of her father, Daniel Halseth, listen to Justice of the Peace Joe Bonaventure during a hearing at the Regional Justice Center on Friday, April 23, 2021, in Las Vegas. Aaron Guerrero and Sierra Halseth are charged in the killing of Daniel Halseth. (Bizuayehu Tesfaye/Las Vegas Review-Journal) @bizutesfaye 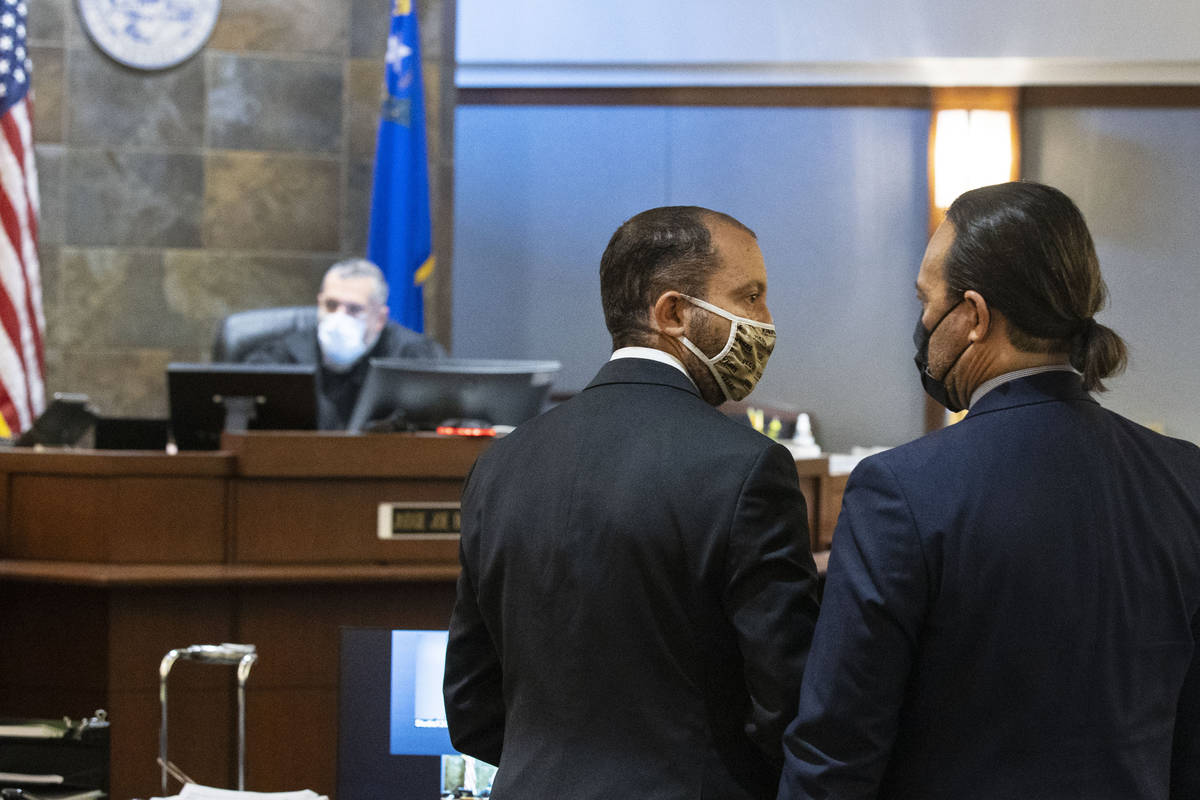 Prosecutor Christopher Hamner, left, and attorney Michael Sanft, representing Sierra Halseth, charged in the killing of her father, Daniel Halseth, talk as Justice of the Peace Joe Bonaventure looks on at the Regional Justice Center on Friday, April 23, 2021, in Las Vegas. Aaron Guerrero and Sierra Halseth are charged in the killing of Daniel Halseth. (Bizuayehu Tesfaye/Las Vegas Review-Journal) @bizutesfaye 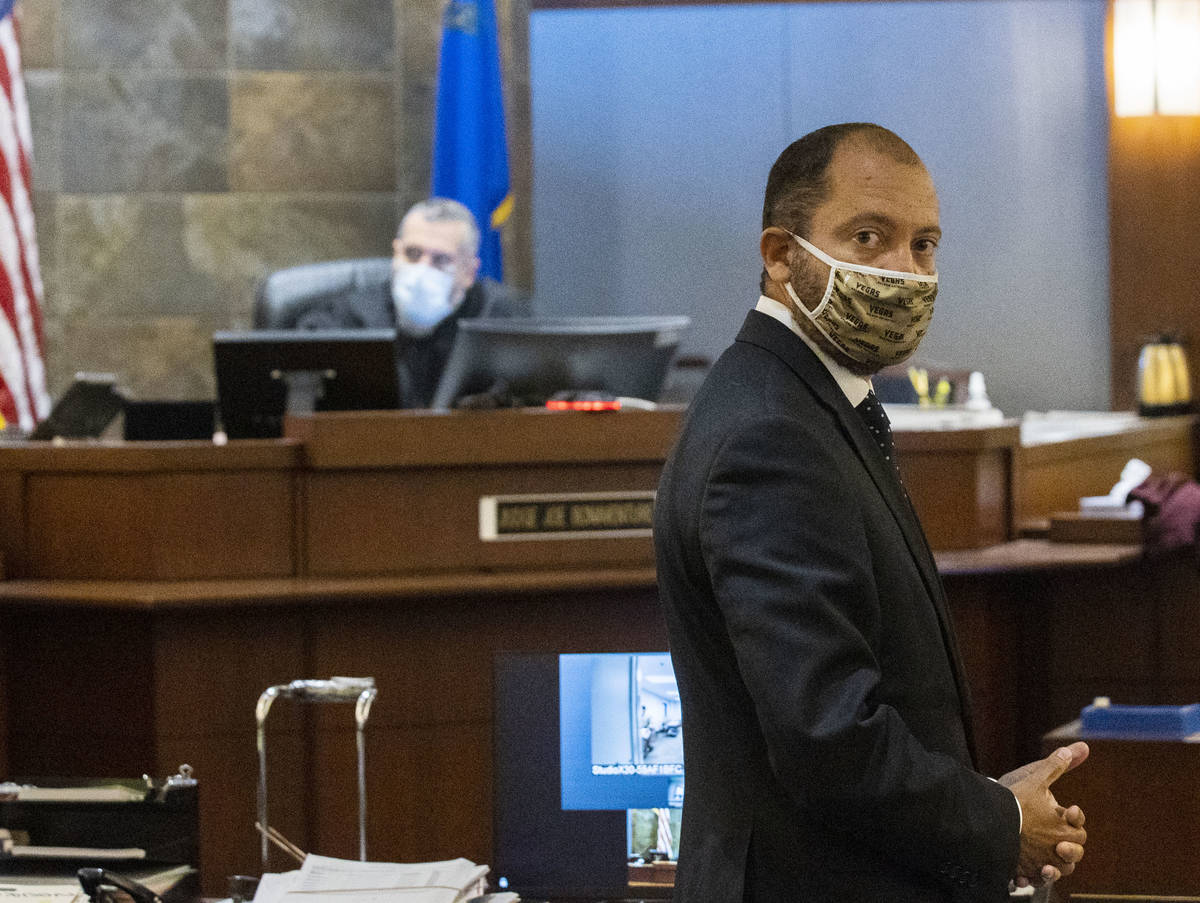 Prosecutor Christopher Hamner looks back as he addresses the court during a hearing for Aaron Guerrero and Sierra Halseth, charged in the killing of Daniel Halseth, at the Regional Justice Center on Friday, April 23, 2021, in Las Vegas. (Bizuayehu Tesfaye/Las Vegas Review-Journal) @bizutesfaye

A 16-year-old girl and her 18-year-old boyfriend, charged with the murder of the girl’s father, have been extradited to Clark County.

The two were arrested last week in Salt Lake City, according to the Metropolitan Police Department. A hearing in the case was held Friday morning, although the defendants, Sierra Halseth and Aaron Guerrero, did not appear in court.

Guerrero declined to appear through a video call due to medical reasons, while there was confusion about whether Sierra Halseth was in the Clark County Detention Center.

“I believe Ms. Halseth is a juvenile and that might be the reason for the placement of her detention,” Justice of the Peace Joe Bonaventure said during the hearing. “She may be at a different facility so that might be why the corrections officers don’t have her right now.”

However, jail records show that both teenagers were booked into the detention center on Thursday.

The body of Daniel Halseth, 45, was found badly burned in the garage of his northwest Las Vegas home on April 9. The day before, Guerrero ran away from home and the teenagers purchased a circular saw, saw blades, bleach, lighter fluid, disposable gloves and drop cloth from stores near Halseth’s home, according to arresting documents.

The couple dated from June to December but were kept from seeing each other after their parents learned they planned to run away to Los Angeles.

Sierra and her two older siblings were also at the center of a bitter custody battle between Halseth and his first ex-wife, former state Sen. Elizabeth Halseth, now Elizabeth Helgelien after remarrying. The couple began disputing the arrangement last year, and a judge ordered Halseth to return Sierra to her mother’s custody in August, court records show.

Defense attorneys and prosecutor Christopher Hamner declined to comment on the case Friday morning. Sierra was represented by private defense attorney Michael Sanft, while Guerrero is being represented by Gabriel Grasso, who was part of O.J. Simpson’s Las Vegas defense team in 2007.

Bonaventure scheduled another hearing in the case for Wednesday morning.

Guerrero and Sierra remained in custody on Friday without bail, court records show.