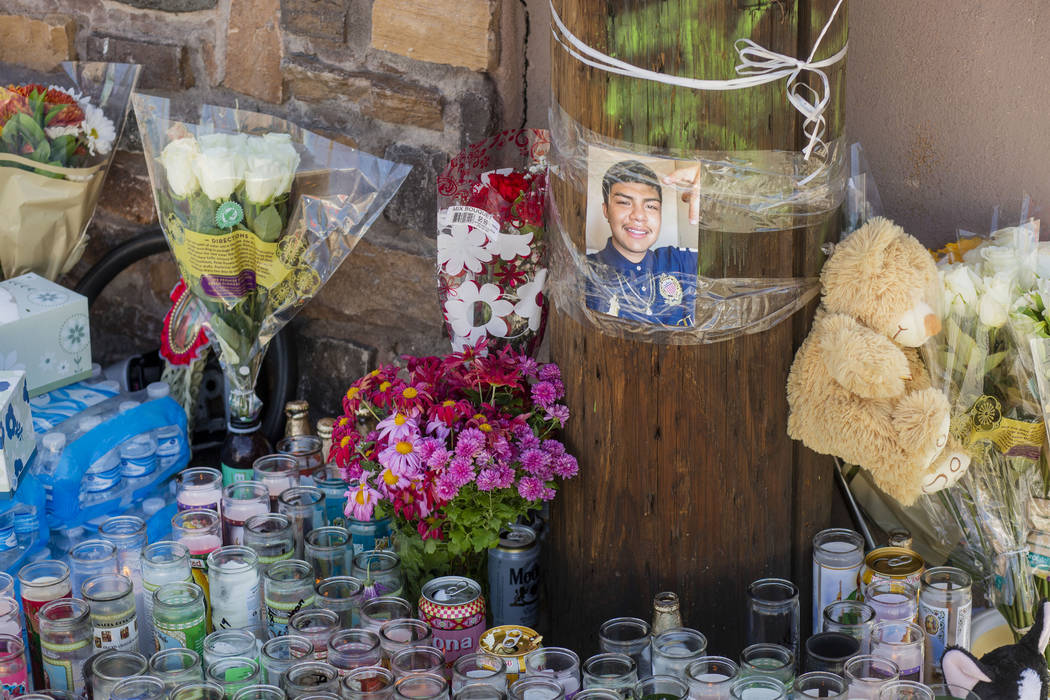 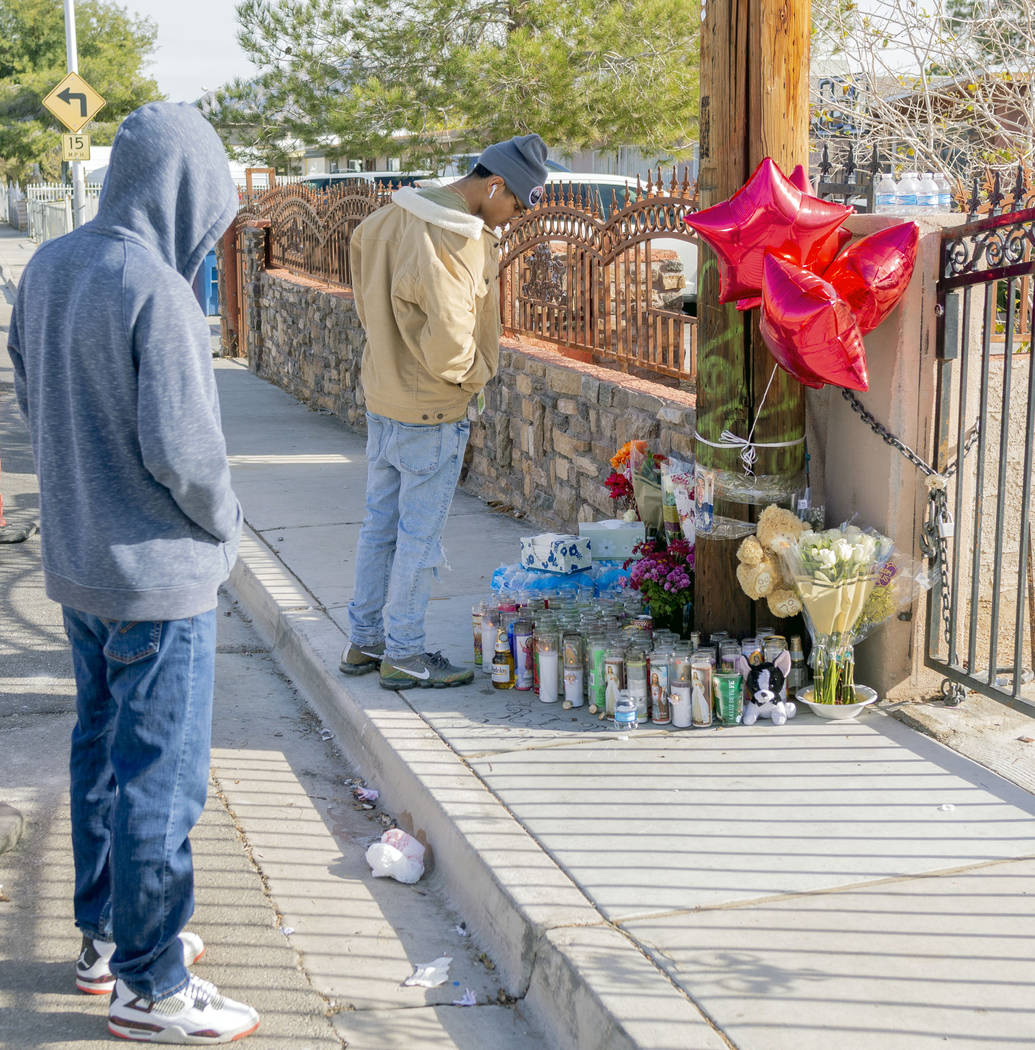 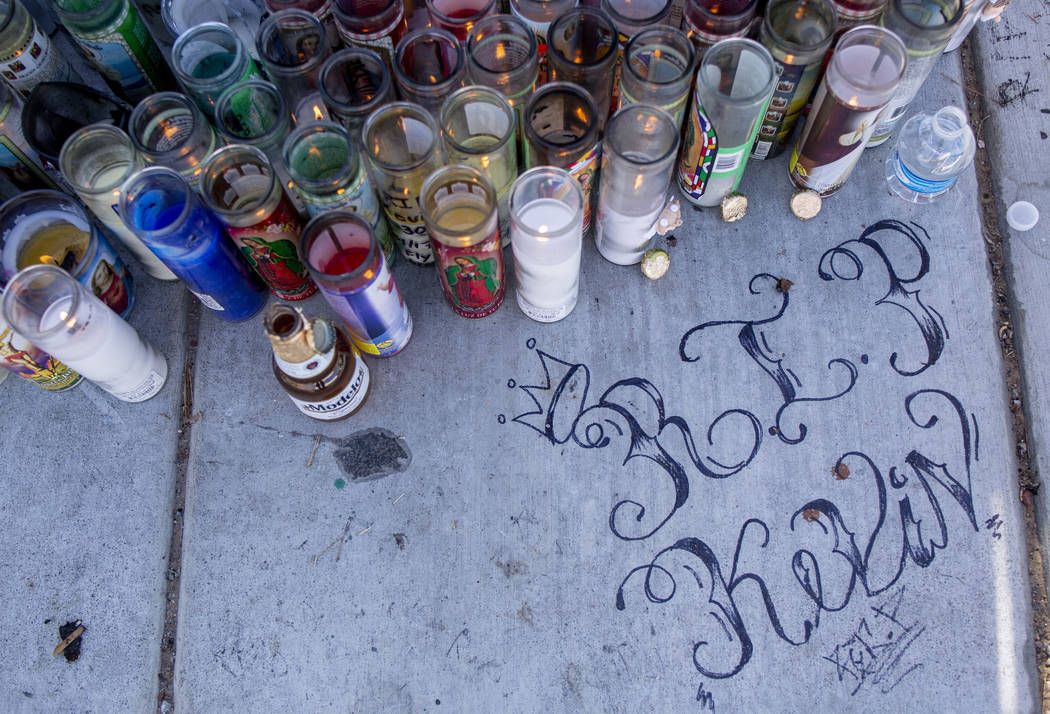 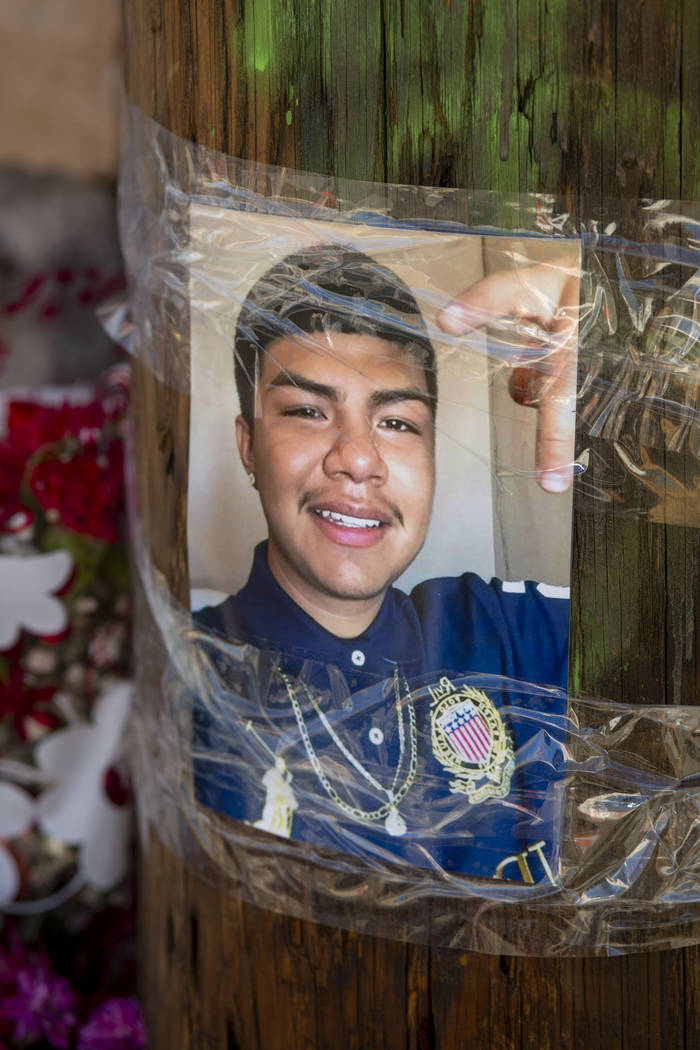 A photograph is hung at a memorial site for Kevin Soriano, 17, of North Las Vegas, who was shot and killed Sunday, Dec. 1, 2019 near East Ferguson Ave. and North Holmes Street in Las Vegas on Monday, Dec. 2, 2019 (Elizabeth Brumley/Las Vegas Review-Journal) 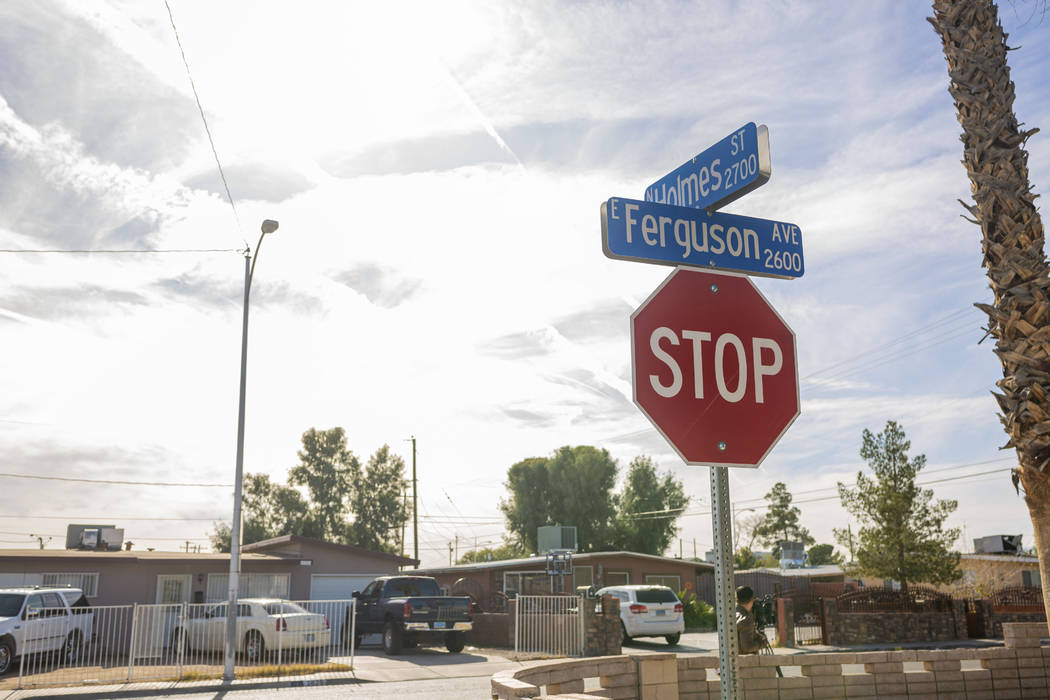 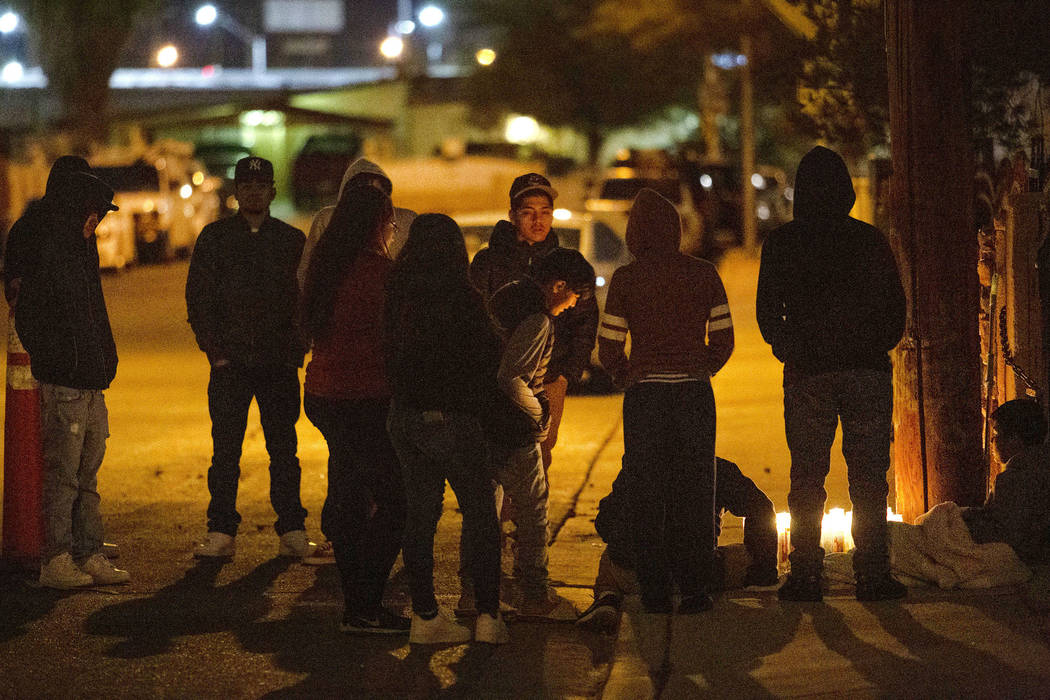 People gather to mourn a 17-year-old boy who was shot and killed near the 2600 block of Ferguson Avenue in North Las Vegas on Saturday, Nov. 30, 2019, in Las Vegas. (Ellen Schmidt/Las Vegas Review-Journal) @ellenkschmidt_ 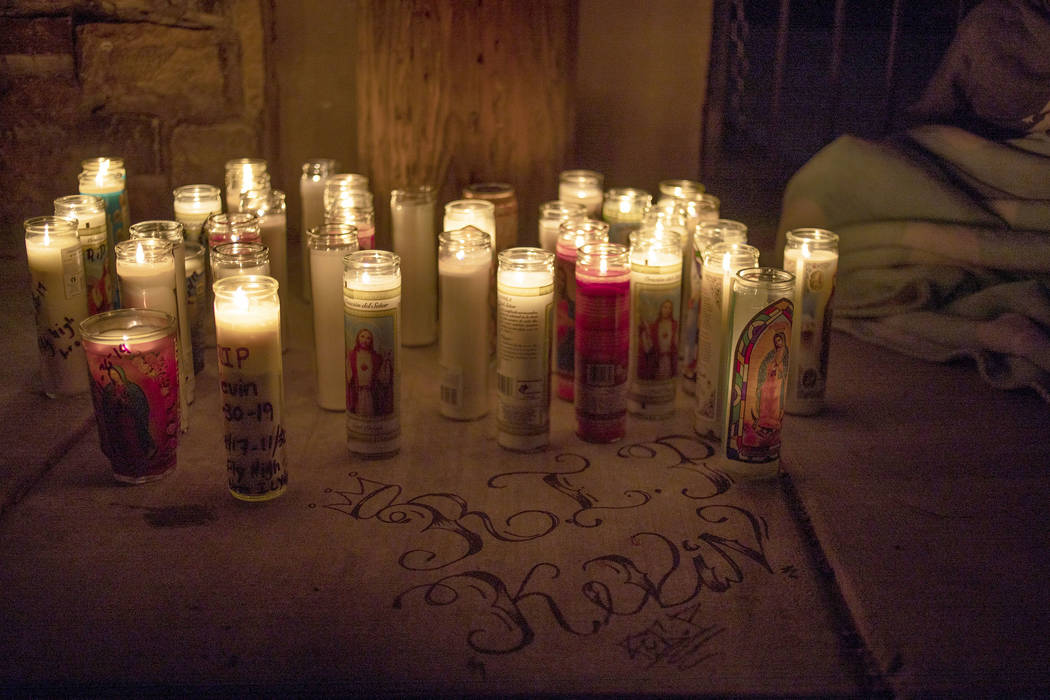 People gather to mourn a 17-year-old boy who was shot and killed near the 2600 block of Ferguson Avenue in North Las Vegas on Sunday, Dec. 1, 2019, in Las Vegas. (Ellen Schmidt/Las Vegas Review-Journal) @ellenkschmidt_ 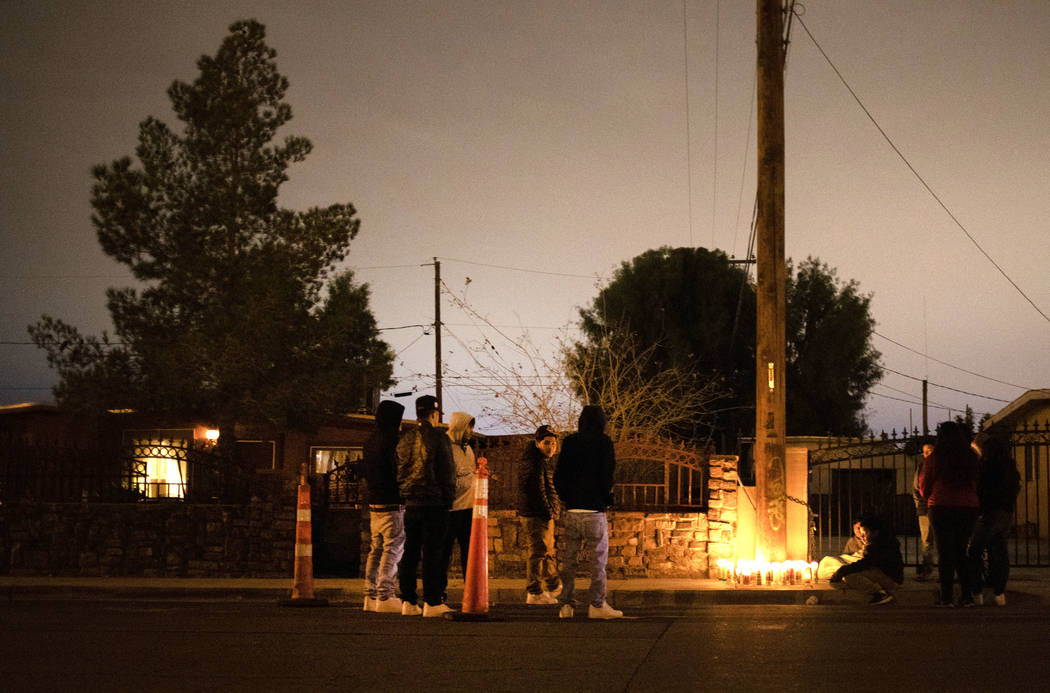 People gather to mourn a 17-year-old boy who was shot and killed near the 2600 block of Ferguson Avenue in North Las Vegas on Sunday, Dec. 1, 2019, in Las Vegas. (Ellen Schmidt/Las Vegas Review-Journal) @ellenkschmidt_

A teen shot to death Saturday while confronting a truck thief has been identified as Kevin Soriano, 17, of North Las Vegas.

The Clark County Coroner’s Office said Soriano’s cause of death was a gunshot wound to the chest. The manner of death is homicide.

North Las Vegas police said officers were called to the 2600 block of Ferguson Avenue, near Evans Avenue and North Las Vegas Boulevard North, for a reported shooting. Officers found Soriano and a 44-year-old man who had been shot.

Soriano died at the scene, police said. The man, identified as the teen’s father, was taken to University Medical Center and is expected to survive.

Detectives say the victim’s family truck was stolen from their home shortly before the shooting. The father and son took the family’s other vehicle to look for the stolen truck, which they found “just down the street,” said Eric Leavitt of the North Las Vegas Police Department.

When the father and son found the truck, a man was inside, Leavitt said. Soriano went to confront the man, who then shot the boy.

The father went to help his son and was also shot, Leavitt said. The suspected shooter then drove away in the stolen truck. The truck was found unoccupied a few hours later in the 2700 block of Perliter Avenue, near Civic Center Drive and Lake Mead Boulevard, which is less than 1.5 miles from the shooting.

No further information has been released at this time about the suspect.