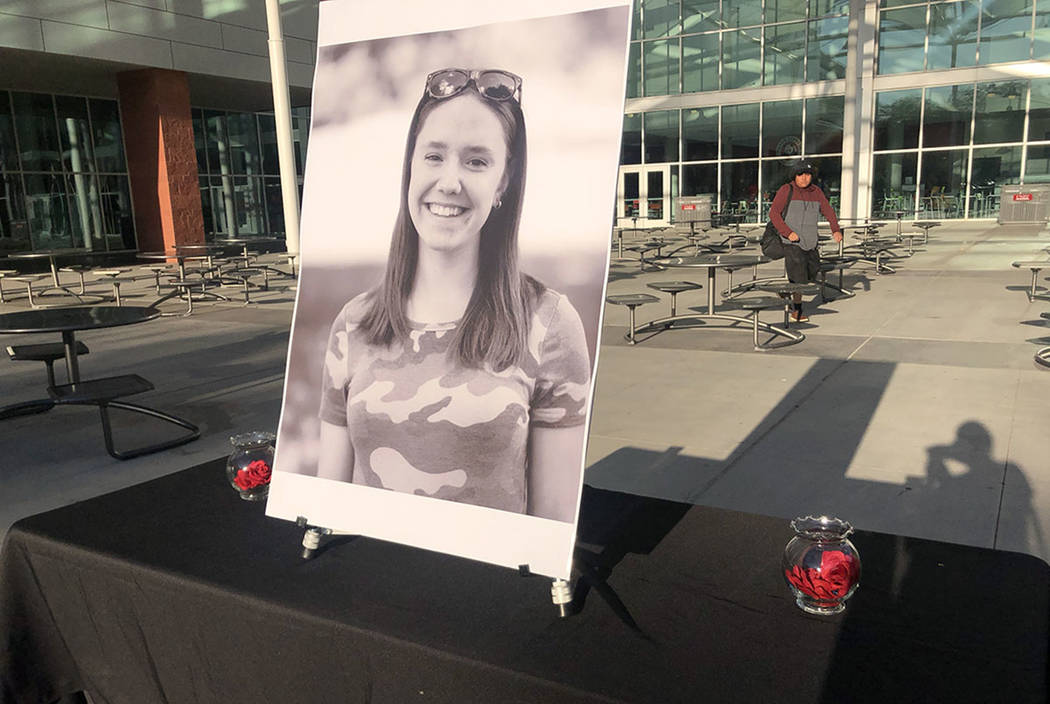 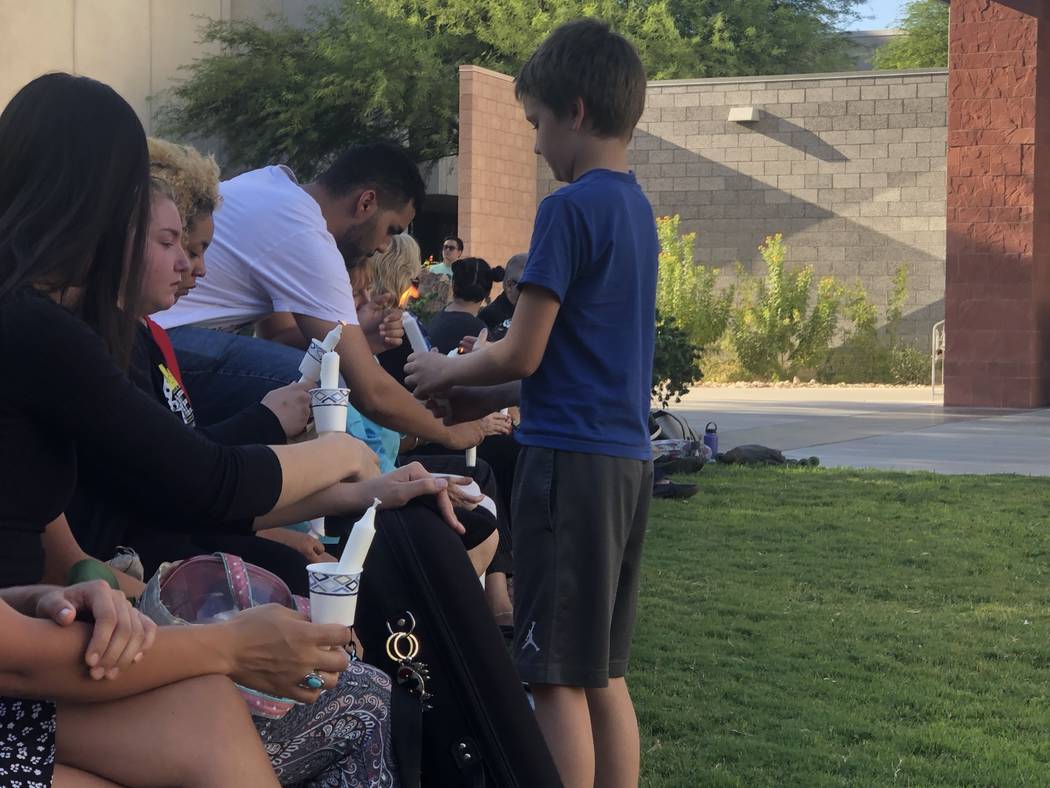 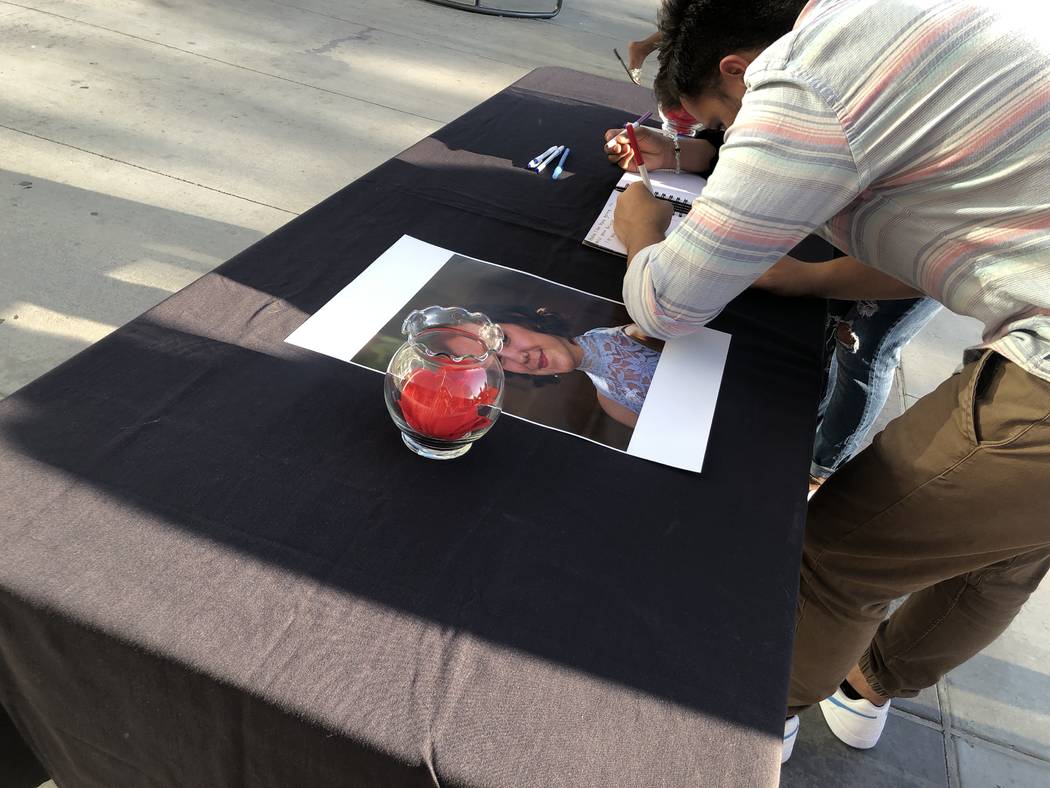 Ryder Hankins, one of Paula Davis' classmates, writes a message to the 19-year-old after a vigil honoring her life on Friday, September 13, 2019 at UNLV. The university student was found fatally shot in North Las Vegas on September 6, 2019, and her ex-boyfriend has been arrested in connection with her death. (Katelyn Newberg/ Las Vegas Review-Journal)

Casey Davis said that in the week since his little sister’s death, the smallest thing can bring on another wave of sadness.

“It’s so up and down,” he said Friday afternoon, a week after 19-year-old UNLV student Paula Davis was found shot to death in North Las Vegas. “You think you’re doing OK for a little bit and kind of just forgetting about it, and all of a sudden some random thing — some very insignificant thing — will just trigger an extreme wave of sadness and loss.”

The 21-year-old was at UNLV for another vigil honoring the life of his sister, less than 24 hours after friends and family gathered at the park where she was found dead in her van Sept. 6. On Tuesday, Davis’ ex-boyfriend, Giovanni Ruiz, was arrested in her death.

According to his arrest report, Ruiz fatally shot Paula Davis and left her body in the park after she attempted to break up with him.

Casey Davis said his family didn’t notice any warning signs that hinted toward Ruiz being capable of violence.

“He was over at our house, he was part of the family, so to speak, during that time they were dating,” he said. “We trusted him.”

Ruiz was a UNLV graduate accounting student. Casey Davis said he believed the two met through the university’s table tennis club, one of many activities Paula Davis was enthusiastic about.

The 21-year-old said his sister never spoke about being frightened of her boyfriend, and his family had no knowledge of the relationship possibly being physically abusive.

According to Ruiz’s arrest report, Paula Davis’ parents told police that Ruiz “would limit Paula’s contact with other male friends.”

The morning she died, Paula Davis sent a final breakup text message to Ruiz, whom she had been dating for about 10 months. Casey Davis said that text was only sent to “clarify things” after the two talked face-to-face.

“It was a text, and the reason was because she was trying to avoid a confrontation in person,” he said.

Instead of focusing on how she died, those who spoke at the vigils Thursday night and Friday afternoon talked about Paula Davis’ warm smile, joy for life and enthusiasm for everything she did.

Of the many activities she participated in, Paula Davis’ friends and teachers Friday talked about how she played multiple instruments, participated in the UNLV marching band, was a member of the honors college, planned to study abroad in Costa Rica, took dance lessons, frequently went ice skating, joined the table tennis club and was working toward a minor in UNLV’s global entrepreneurship program.

Ryder Hankins, one of Paula Davis’ peers in the entrepreneurship program, said he organized Friday’s vigil for his classmates to be together. Only 20 students are admitted into the program each semester, so he was close with the 19-year-old during their weekly classes, Hankins said.

Many in Paula Davis’ entrepreneurship group, called a cohort, spoke about her enthusiasm.

“A funny thing about our cohort is we’re very different, all of us, and Paula was one of the more positive people,” Hankins said after the vigil. “Paula was just like a beam of light.”

During the vigil, UNLV acting President Marta Meana said Paula Davis was “UNLV family” who was “known for her kindness.”

“A friend said Paula would want to be remembered for her laughter, her joy and her smile,” Meana said. “I believe all of us can honor Paula by being part of her legacy by being kind to each other and by serving others.”