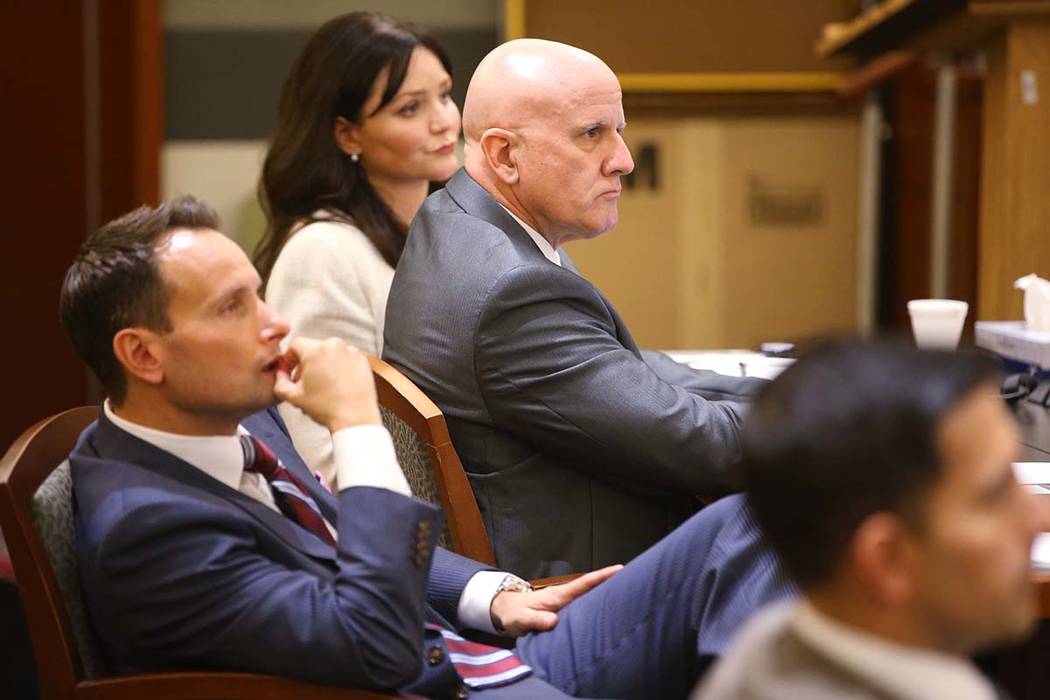 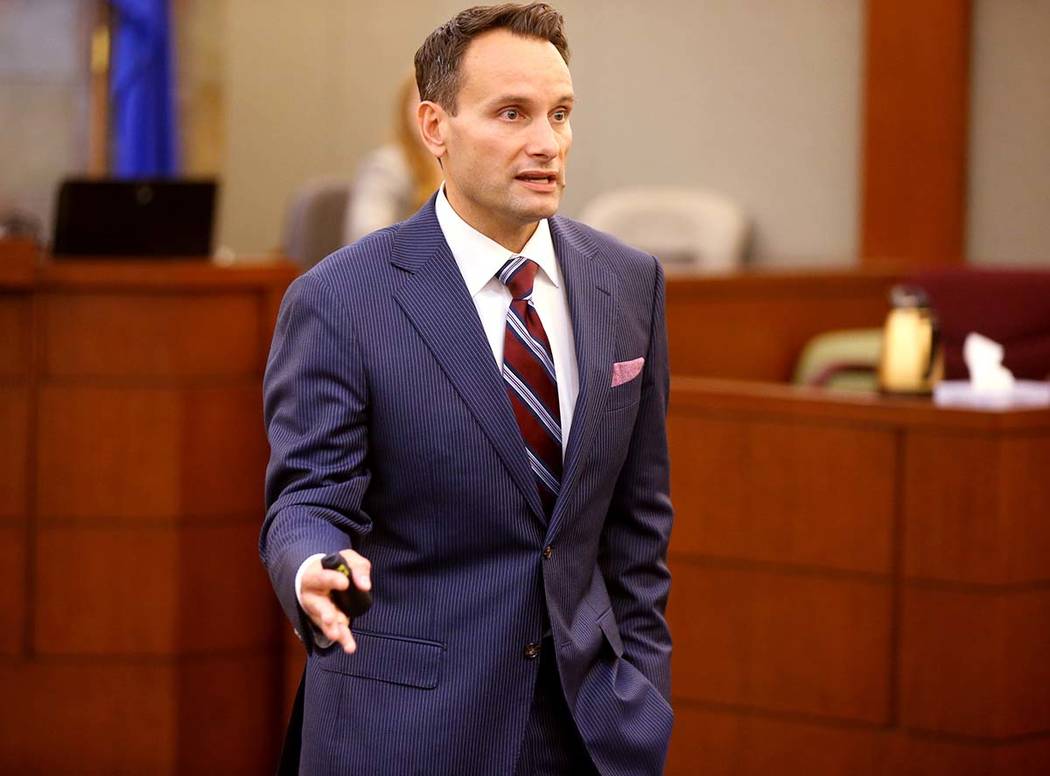 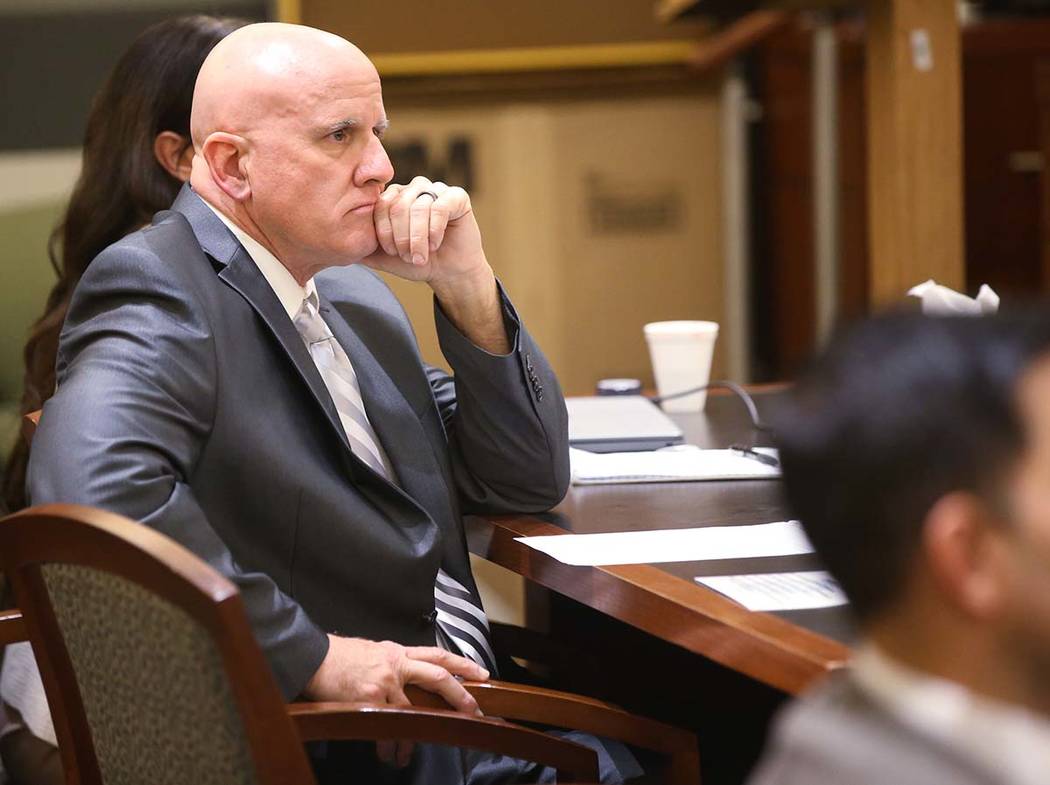 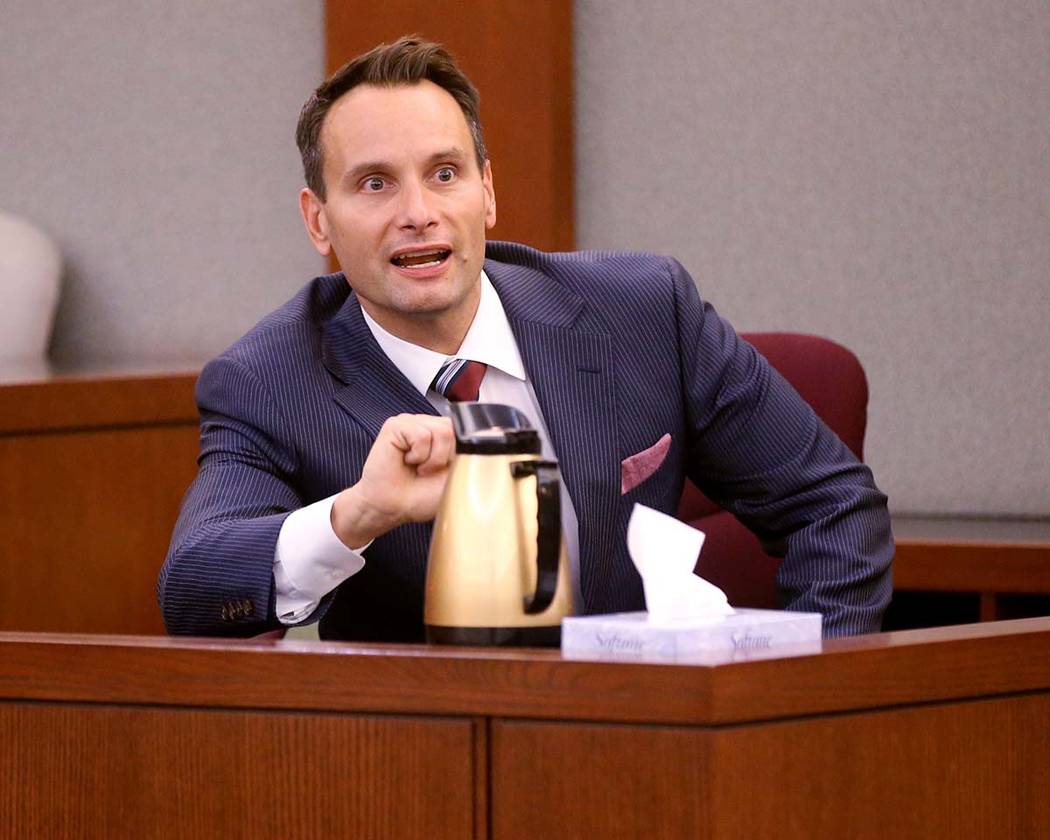 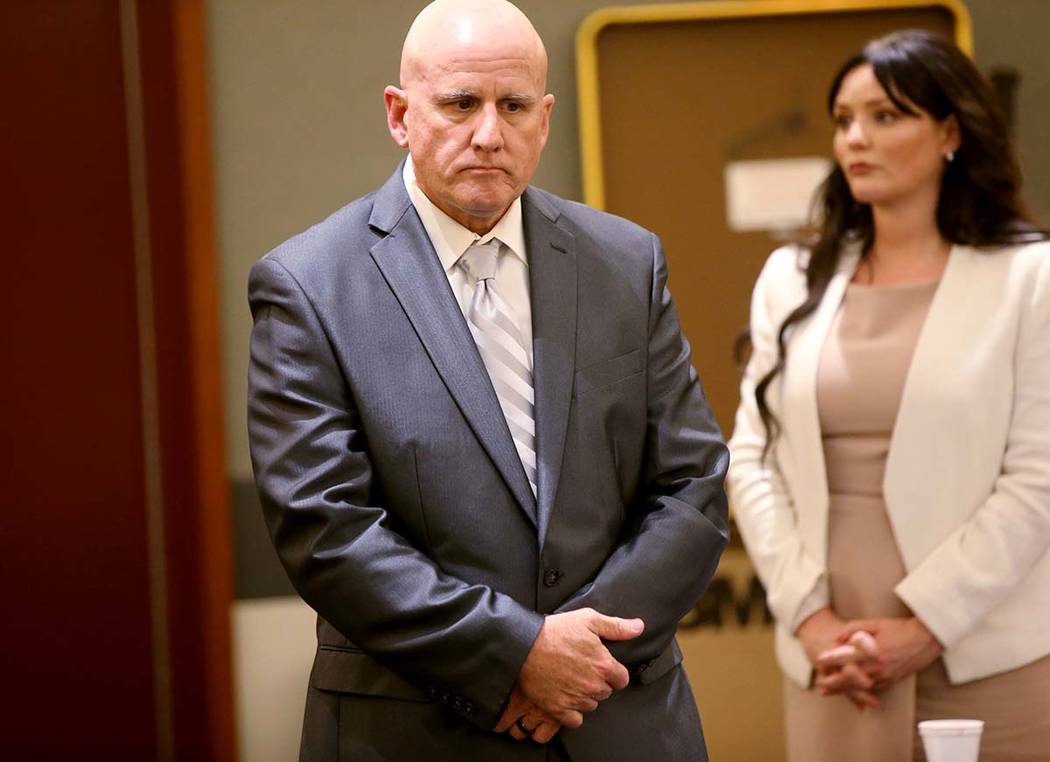 Las Vegas police Lt. James "Tom" Melton and one of his attorneys, Jean Schwartzer, stand as the jury walks into the courtroom at the Regional Justice Center in Las Vegas Wednesday, Sept. 25, 2019. Melton is charged with elderly exploitation, accused of deceiving a couple out of hundreds of thousands of dollars. (K.M. Cannon/Las Vegas Review-Journal) @KMCannonPhoto 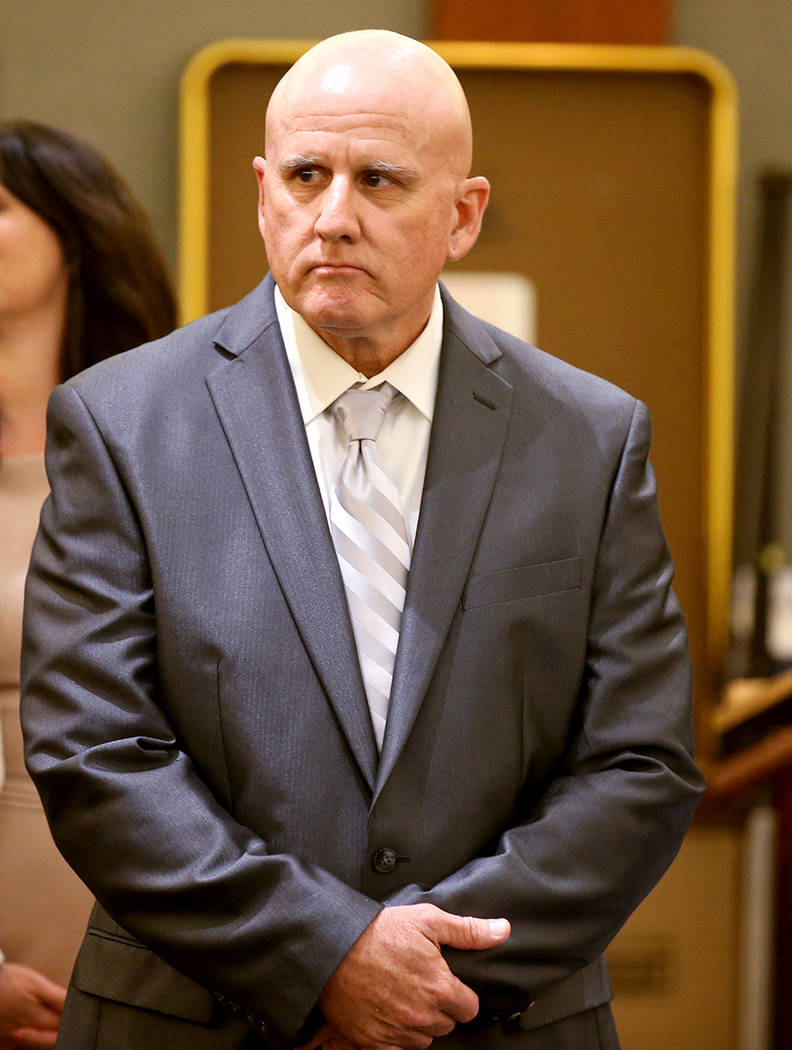 Las Vegas police Lt. James "Tom" Melton stands as the jury walks into the courtroom at the Regional Justice Center in Las Vegas Wednesday, Sept. 25, 2019. Melton is charged with elderly exploitation, accused of deceiving a couple out of hundreds of thousands of dollars. (K.M. Cannon/Las Vegas Review-Journal) @KMCannonPhoto 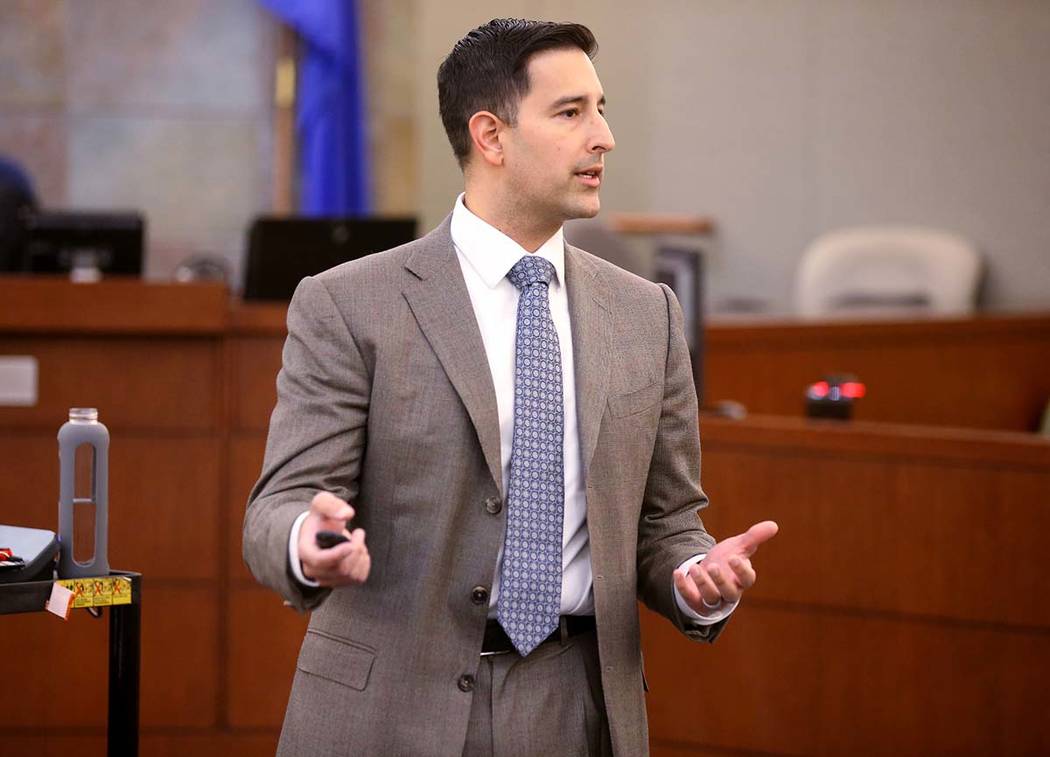 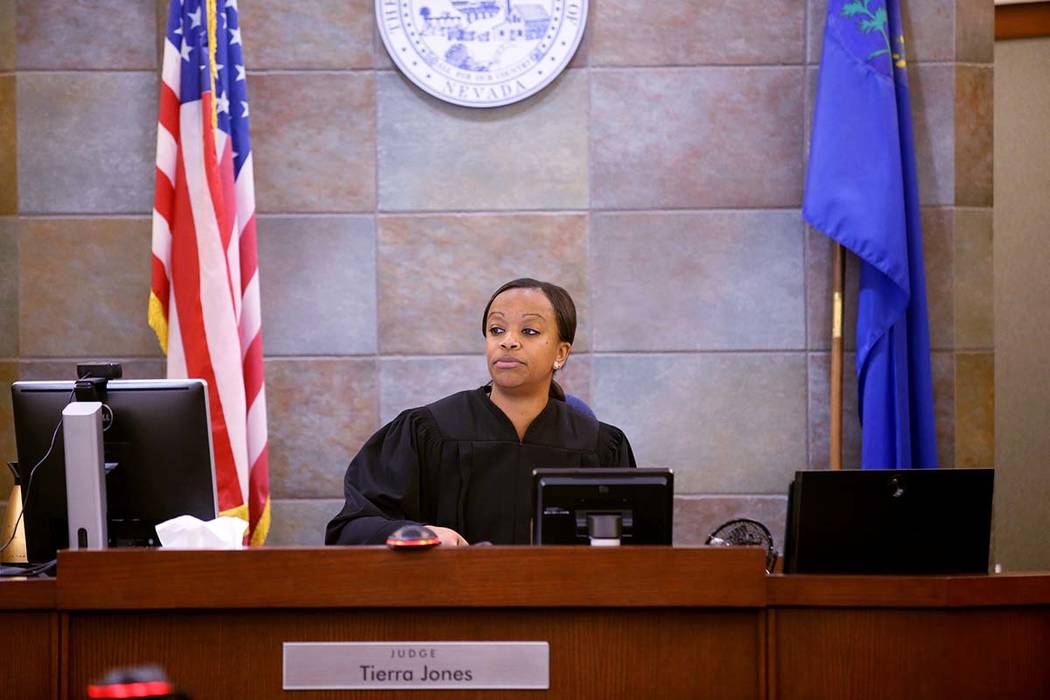 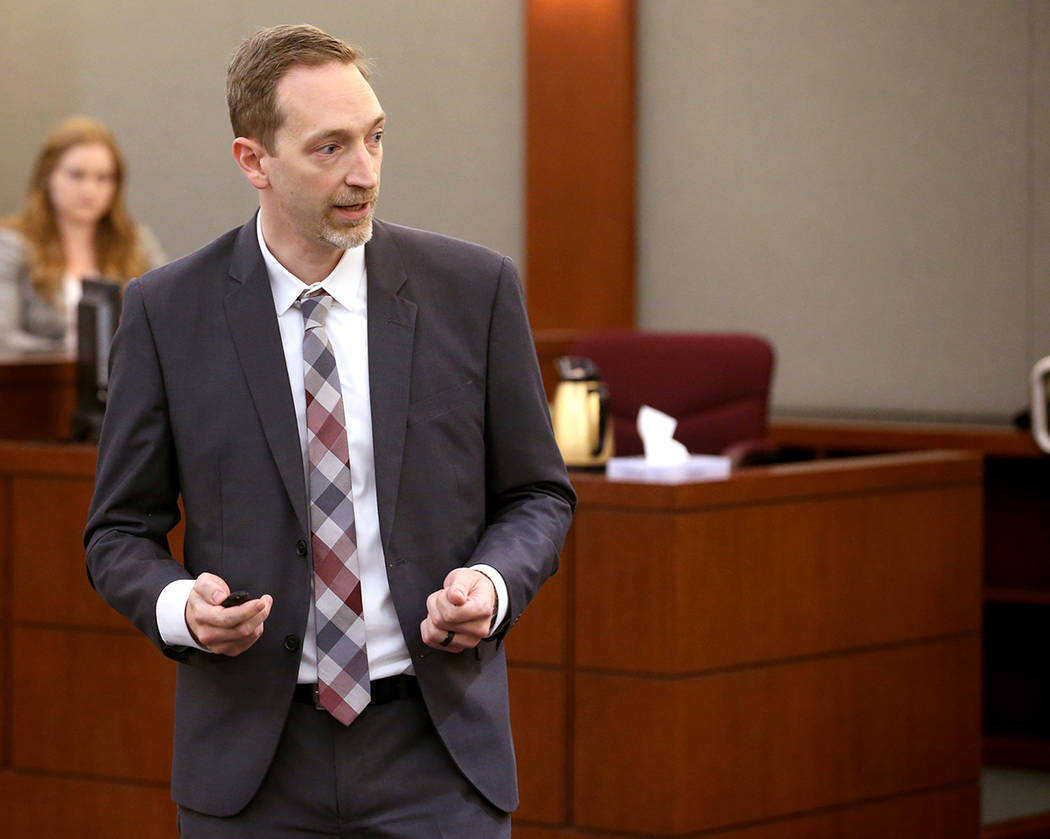 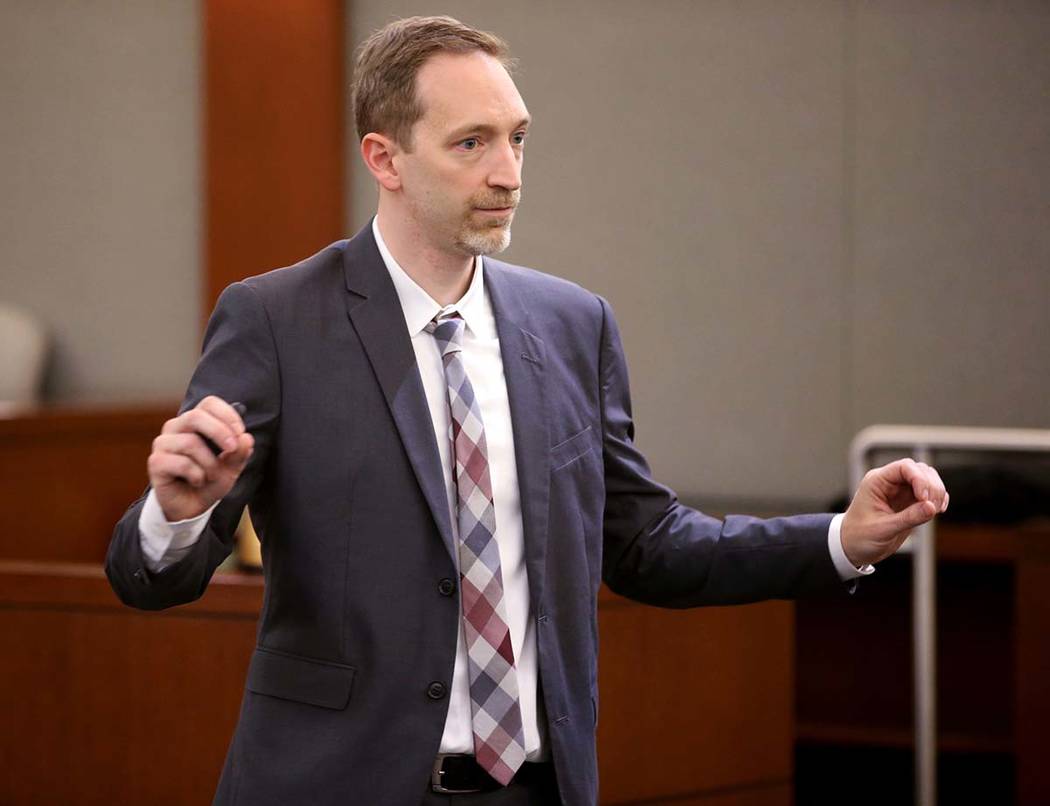 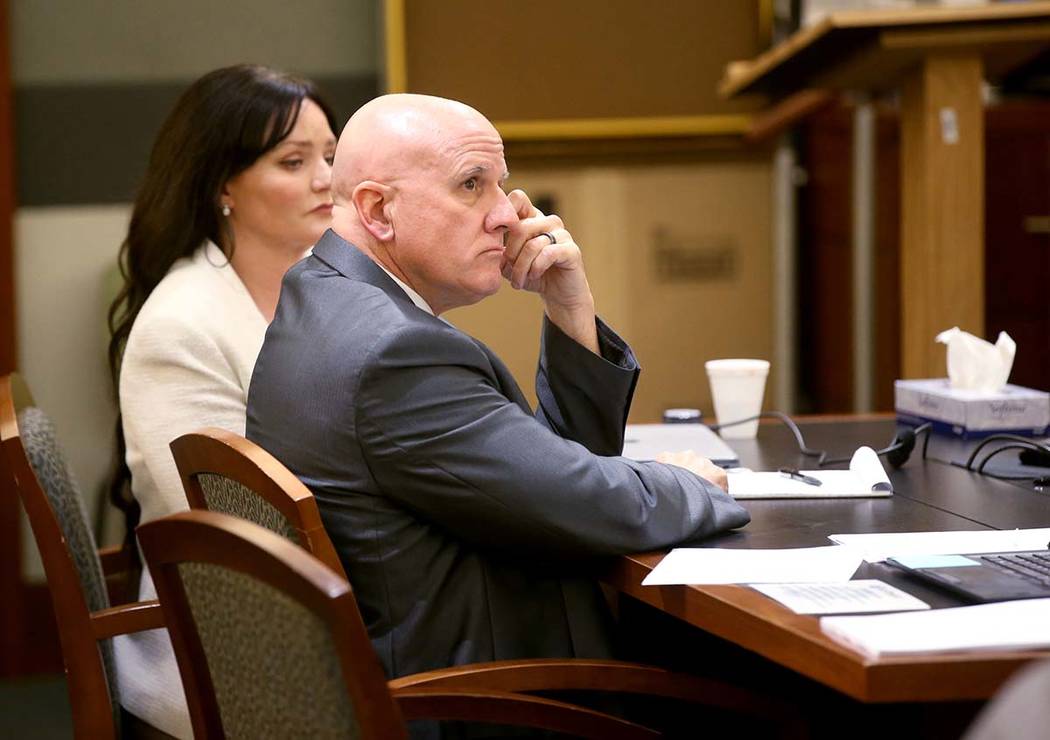 Las Vegas police Lt. James "Tom" Melton listens to closing arguments with one of his attorneys, Jean Schwartzer, in court at the Regional Justice Center in Las Vegas Wednesday, Sept. 25, 2019. Melton is charged with elderly exploitation, accused of deceiving a couple out of hundreds of thousands of dollars. (K.M. Cannon/Las Vegas Review-Journal) @KMCannonPhoto 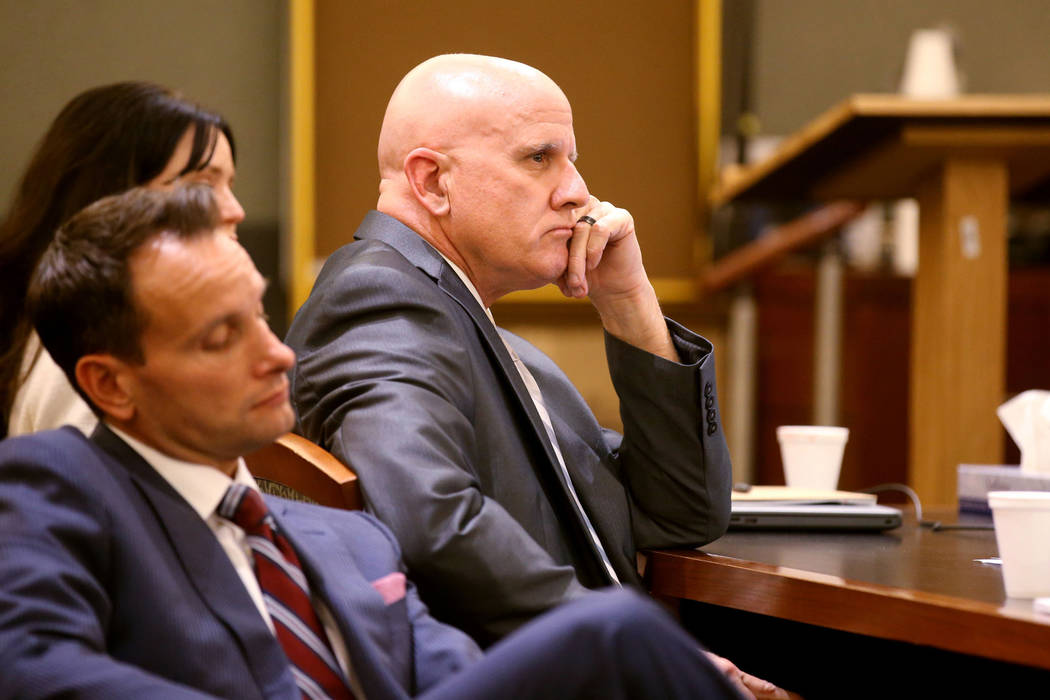 “This case is politically driven. It is a sad fact that it is,” defense lawyer Josh Tomsheck told jurors before they began deliberating 13 felony counts against James “Tom” Melton, 52.

While running a failed campaign for governor last year, Republican Adam Laxalt issued a press release from the attorney general’s office about the charges, identifying Melton by his profession.

“There’s a man behind that career,” Tomsheck said. “It’s not just a title.”

Prosecutors allege that Melton deceived an elderly couple out of hundreds of thousands of dollars between December 2010 and May 2017. Along with perjury and elderly exploitation, Melton faces charges of theft and grand larceny auto.

“Melton used his position of trust to try and take the entire estate of the Flahertys,” Westmeyer said, urging jurors to “follow the money.”

Raman rejected the idea that the case was politically driven.

“Ever seen a press release before?” he said in rebuttal to Tomsheck. “The attorney general’s office issues one in almost every case they do.”

This year, District Judge Tierra Jones, who is overseeing Melton’s trial, ordered Parks to serve 16 to 40 years behind bars for stealing from elderly victims for whom she was supposed to care. Simmons and Parks’ husband, Gary Taylor, also were given prison time.

Melton, who most recently worked in the Metropolitan Police Department’s Homeland Security division, has been on unpaid suspension since July 2017, when authorities launched the investigation.

Melton, Parks and Simmons were accused of using Simpson’s services to file false and misleading legal papers with the court in order to obtain guardianship and name Melton as the successor trustee of Beverly Flaherty’s family trust.

Simpson has cooperated with prosecutors, pleading guilty in November to one count of elderly exploitation. She testified at Melton’s trial.

Tomsheck argued Simpson “had a huge motive to lie in this case” and questioned why prosecutors did not have Parks testify against Melton.

“Holy smokes,” Tomsheck said. “If there’s a person we’ve got to hear from in this trial, it’s April Parks.”

Raman argued that Melton wrongly blamed others charged in the case, and that he was dishonest when he testified during the trial about his legal knowledge regarding guardianship.

“You can’t come into court and act like an idiot and say, ‘I don’t know what the law is,’ even though you’re a lawman,” Raman said. “He came in here and lied to you, lied to your faces because it was advantageous to do so. … He’s a policeman who lied to you guys.”