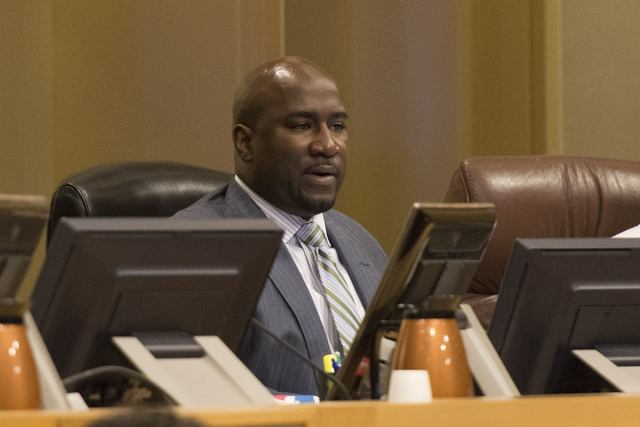 A politically connected public relations firm has been tied to the corruption investigation of Las Vegas City Councilman Ricki Barlow, the Las Vegas Review-Journal has learned.

FBI agents recently subpoenaed records from Barlow related to his campaign and business dealings with the Ramirez Group and its owners in 2015 and 2016, according to a source close to the investigation.

Barlow’s campaign records show that he paid a total of $70,000 in consulting fees to the statewide company in March and May of last year.

The company, which has offices in Las Vegas and Reno, is run by Jacki Ramirez, who serves as its CEO, and her husband, Andres Ramirez, the company’s president. The couple did not return several calls for comment on Wednesday, but late in the day the firm’s lawyer, Chris Rasmussen, said the company had received a subpoena for records.

“We confirm receipt of a subpoena and are cooperating fully with the government’s requests,” Rasmussen told the Review-Journal.

Andres Ramirez is vice chairman of the Democratic National Committee’s Hispanic Caucus and an at-large superdelegate in Nevada for Democratic presidential candidate Hillary Clinton. Political satirist Samantha Bee last week questioned his role as a Clinton superdelegate during an interview with him on her “Full Frontal“ TBS show.

Both Jacki and Andres Ramirez are former aides to retiring U.S. Sen. Harry Reid, D-Nev., and have been active in the local Hispanic business and political communities.

Democratic State Sen. Ruben Kihuen, who is trying to unseat Rep. Cresent Hardy, R-Nev., is listed on the company’s website as a “principal” in the Ramirez Group. In a federal financial disclosure report filed in May, he said he received a salary of $55,846 from the company in 2015.

A campaign spokesman for Kihuen said Wednesday that the candidate has no knowledge of the FBI investigation and was on leave from the firm between February and June of 2015 while attending the Nevada Legislature.

Kihuen is currently on leave while campaigning for Congress, the spokesman said, adding that Kihuen last week donated a $1,000 campaign contribution from Barlow to the Nevada Partnership for Homeless Youth.

The Ramirez group says on its website that it provides a broad range of services, including media and campaign strategy, fundraising, research and analysis, direct marketing and database management. The firm helped the state of Nevada enroll residents in qualified health insurance plans in 2013 under the federal Affordable Care Act pushed by President Barack Obama.

The company is not the only one linked to the Barlow investigation.

FBI agents, working with Las Vegas police intelligence detectives, also have subpoenaed records from Barlow of his dealings with Roxann McCoy, the president of the local NAACP chapter, and her consulting company, sources told the Review-Journal.

Investigators are attempting to determine whether Barlow, who represents the city’s Ward 5, received kickbacks for any of the consulting expenses his campaign paid to McCoy’s company, according to a source.

Earlier this week, the Review-Journal reported that the informant at the center of the undercover investigation went by the name of Randall Henley.

Sources close to the investigation said FBI agents subpoenaed records of business dealings between Barlow and Henley that occurred in 2015 and 2016. Henley was associated with a company called RMH Development.

It is unclear whether Randall Henley is his real name, and the name does not show up in city business or state licensing records online. It also does not appear in Barlow’s latest campaign reports.

Barlow acknowledged last week that he was under investigation, and his lawyer, Richard Wright, told the Review-Journal that FBI agents were looking at his campaign contributions.

According to Wright, the FBI and federal prosecutors were investigating possible violations of a federal “honest services” law, as well as possible wire fraud and mail fraud — mostly in connection with Barlow’s 2015 campaign.

Both Wright and an FBI spokesman declined to comment Wednesday on the investigation.