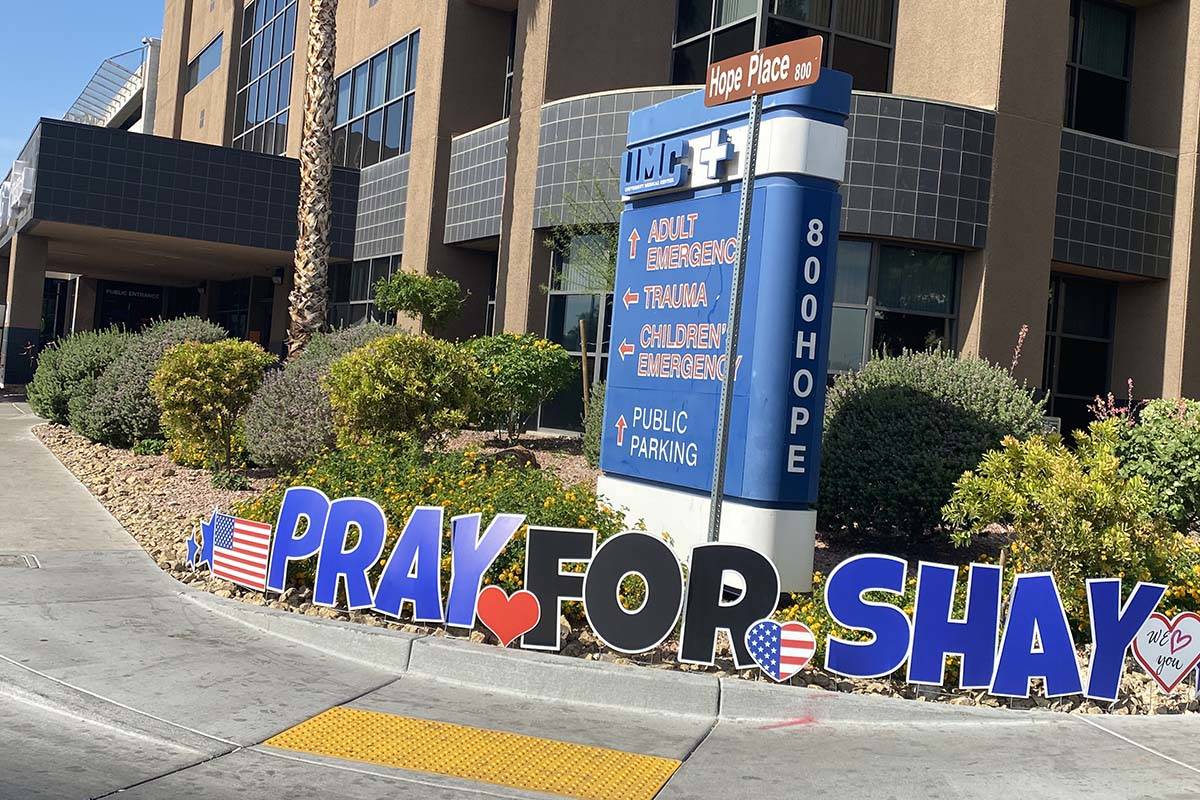 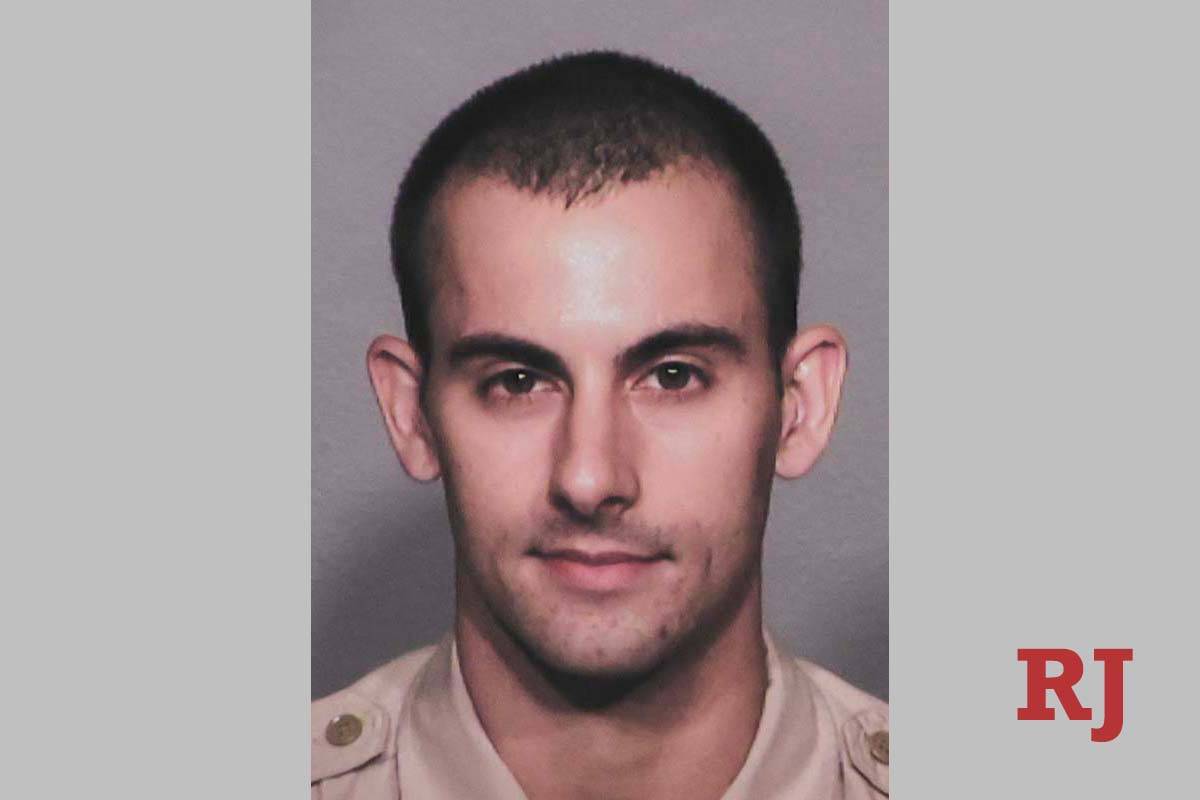 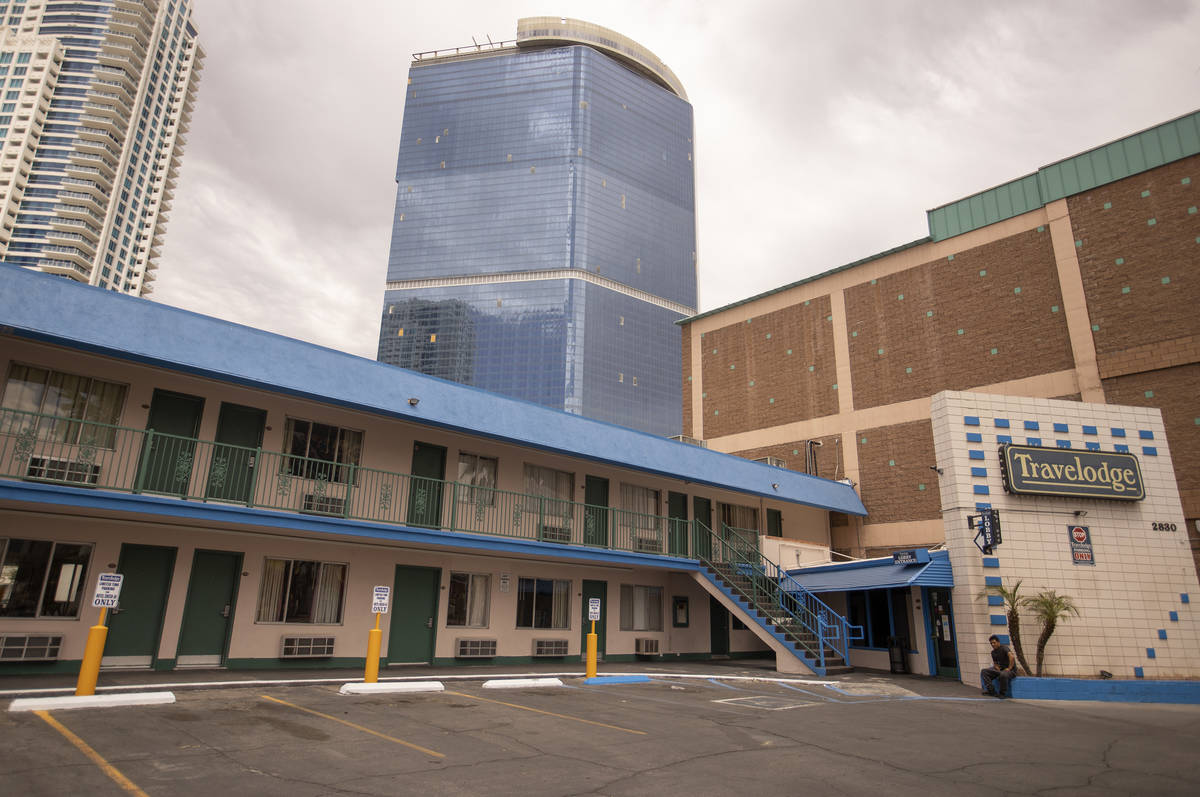 The Travelodge is seen on Friday, June 5, 2020, on the Las Vegas Strip. Edgar Samaniego, who is accused of shooting Las Vegas police officer Shay Mikalonis, was taken into custody at this Travelodge on Monday. (Ellen Schmidt/Las Vegas Review-Journal) @ellenkschmidttt 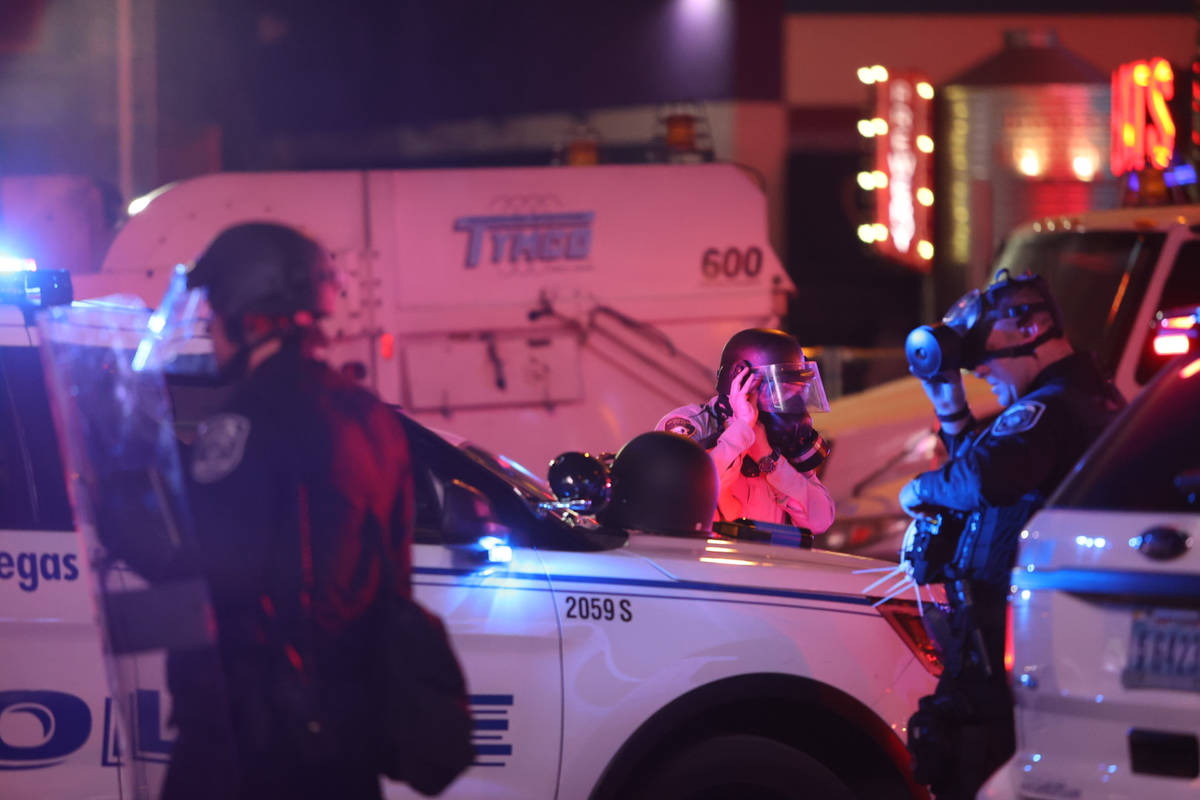 Officers put on gas masks on at Fremont Street and Las Vegas Boulevard South prior to deploying tear gas to break up a crowd of Black Lives Matter protesters on Monday, June 1, 2020. (Ellen Schmidt/Las Vegas Review-Journal) 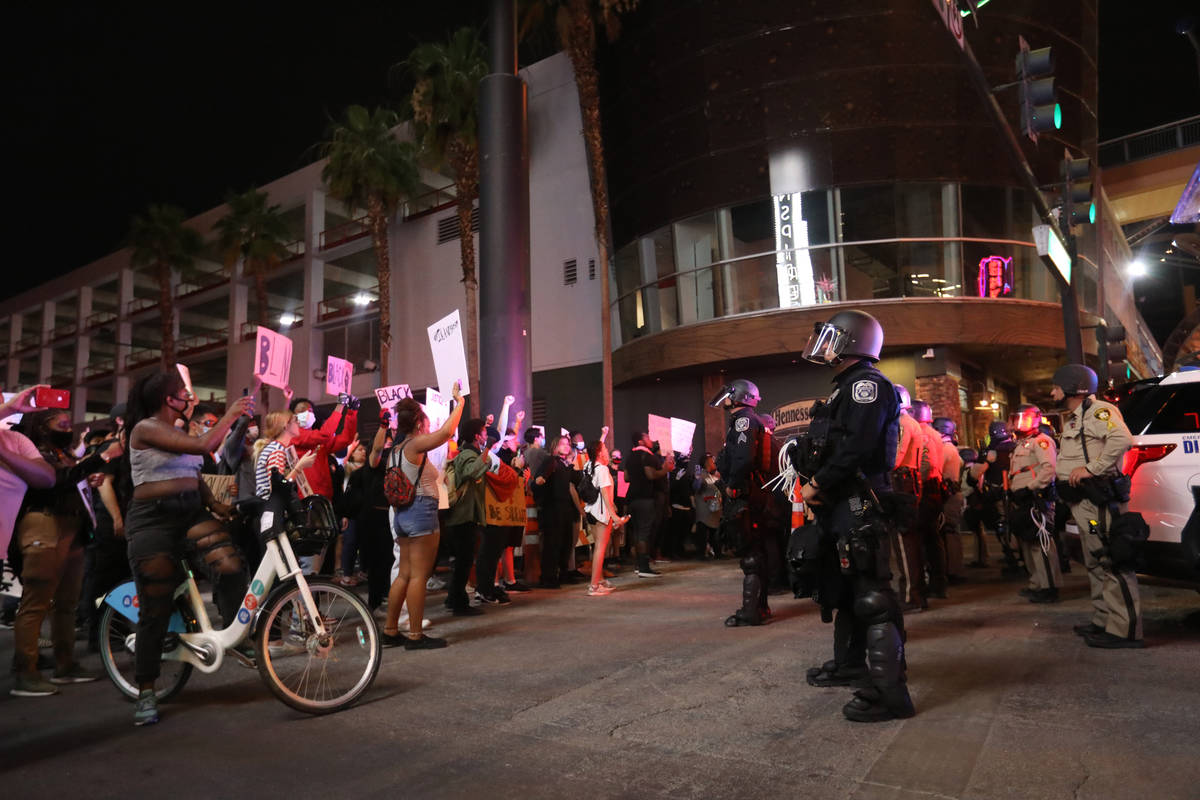 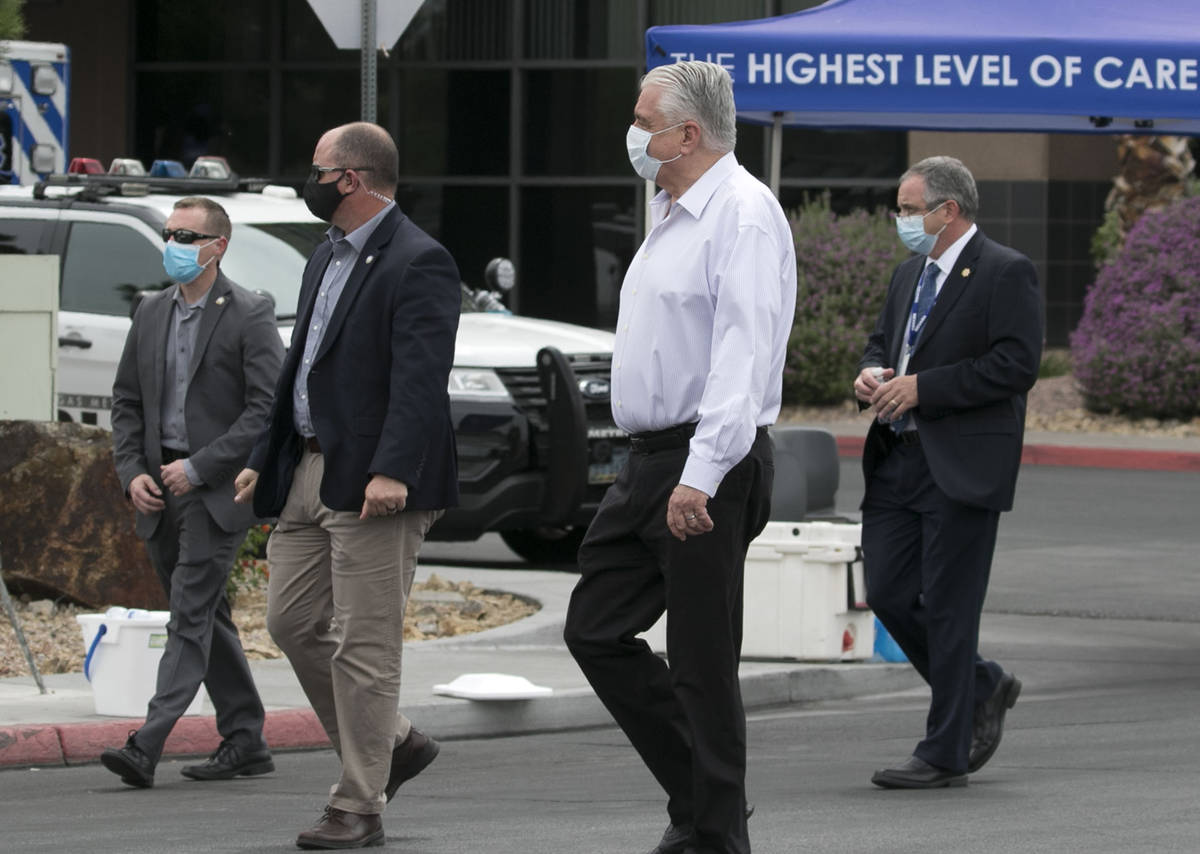 Gov. Steve Sisolak, center, leaves University Medial Center on Tuesday, June 2, 2020 after visiting the hospital and paying respects to a Las Vegas police officer who has been hospitalized after being shot and critically injured as police attempted to take protesters into custody in front of the Circus Circus during a Black Lives Matter protest in Las Vegas. (Bizuayehu Tesfaye/Las Vegas Review-Journal) @bizutesfaye 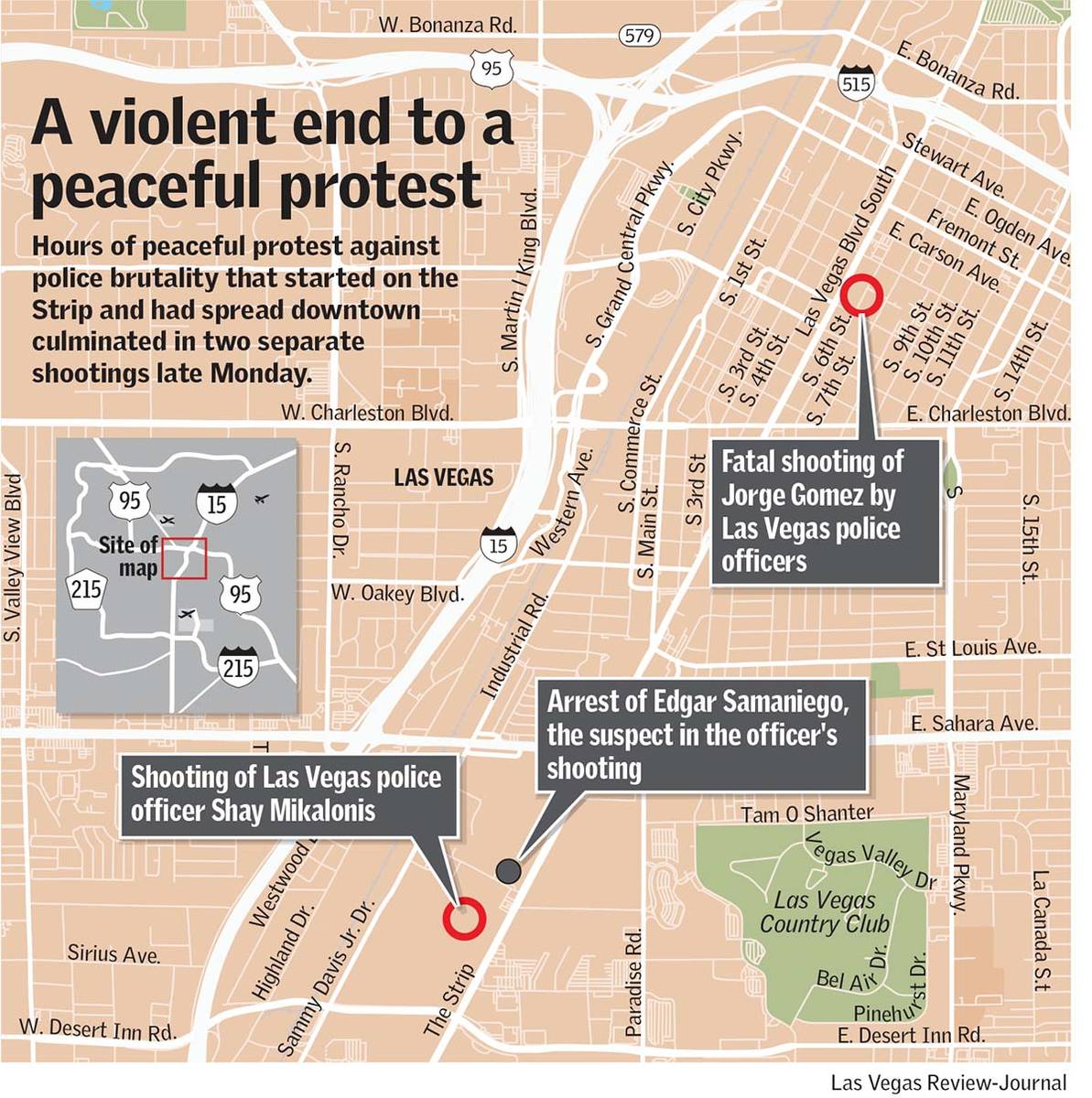 The violence that followed would span just minutes, if not seconds, but is sure to upend the lives of many for years to come.

It was nearing midnight on Monday. Hours of peaceful protest on the Strip and in downtown Las Vegas against police brutality had preceded this moment. It was warm outside. There was a light breeze. The sky was clear, and the moon was round and bright, though not quite full.

That night, Mikalonis and Gomez might not have crossed paths. But by around 11:30 p.m., both men had wound up on Las Vegas Boulevard after a fourth night of local demonstrations sparked by the May 25 killing of George Floyd, an unarmed black man, while he was in Minneapolis police custody.

In that moment, Metropolitan Police Department officers were trying to break up a large crowd of protesters outside Circus Circus when a single round was fired from across the street, about 50 feet away.

Mikalonis collapsed to the ground.

The report of an officer down sent Sgt. Ryan Fryman and officers Dan Emerton, Vernon Ferguson and Andrew Locher south on Las Vegas Boulevard toward their injured colleague, according to Metro Assistant Sheriff Chris Jones.

But the men did not make it to Circus Circus.

As they drove past Bridger Avenue, the officers saw Gomez running from the steps of the Lloyd George U.S. Courthouse. He was visibly armed with a Glock 19 handgun holstered on his hip and a Glock 23 pistol nestled into a carbine conversion kit slung over his shoulder. A third weapon was later found in his backpack, according to police.

In a matter of seconds, witness video shows, the four officers exited their vehicle and fired a combined 19 rounds from their weapons.

Gomez collapsed to the ground.

Both men were taken to University Medical Center. Mikalonis was placed on life support. Gomez died.

This early account of a deadly end to a peaceful night of protests is based on public records, statements made during court hearings and media briefings, interviews with witnesses and videos taken by protesters.

A 2008 graduate of Arbor View High School, Mikalonis was a wide receiver on the school’s varsity football team during his sophomore year. He wore No. 81. Raised in a law enforcement family, Mikalonis in 2016 went on to join Metro, the same police force for which both his parents worked. He is assigned to the department’s Convention Center area command, where he was shot.

As thousands marched on the Strip and in downtown that night, according to police documents, 20-year-old Edgar Samaniego checked into room No. 147 at the Travelodge by Wyndham, a motel across the street from Circus Circus, with a 17-year-old girl “because his mother doesn’t like him to have sex in her house.”

Samaniego was captured on video by surveillance cameras at the motel walking west on Circus Circus Drive, across from the crowd of officers and protesters, while Mikalonis was handcuffing someone. The video had not been made public as of Saturday but is described in Samaniego’s two-page arrest report.

Without stopping, the report states, a man looked over his left shoulder as he pulled a handgun from the right side of his pants.

The shooter slid the gun back into his pants.

At the same time, a security guard for the Travelodge happened to be standing in the motel parking lot. He would later identify Samaniego as the shooter with 100 percent certainty, the report states.

As officers crowded around Mikalonis and worked to get the protesters out of the area, the video shows, the suspect walked up to the second-floor landing of the Travelodge facing the casino. After a few minutes, according to the report, he went back down the stairs and walked out of the camera’s frame.

Prosecutors have said they believe the suspect fired at least two more rounds while he stood on the landing, though whether those shots were aimed at other people wasn’t immediately clear.

Three miles north of Circus Circus, at least 15 Metro officers and U.S. marshals, most of them suited up in face shields and helmets, surrounded Gomez while a Las Vegas Fire Department medic, wearing blue latex gloves, worked on him. He had been shot multiple times, according to the Clark County coroner’s office.

Gomez, 25, had attended “multiple protests throughout the week,” Jones, the assistant sheriff, said Friday during a media briefing. That night, he added, Gomez “exercised his right to open carry” and was “not suspected of committing any crimes” prior to his deadly encounter with officers at the courthouse.

About a half-hour before Gomez was shot and killed, a group of peaceful protesters stood in the intersection of Fremont Street and Las Vegas Boulevard South, their fists raised as they chanted, “Hands up! Don’t shoot!” at a group of Metro and North Las Vegas police officers.

At the front of the crowd stood Gomez, who, at times, held a white poster above his head.

Around 11:02 p.m., according to metadata from photos taken by a Review-Journal photographer, the officers began to suit up in gas masks and full body shields as they ordered the crowd to disperse. By 11:10 p.m., the metadata showed, SWAT had entered the intersection in an armored vehicle, and a thick blanket of tear gas filled the air. Choked and disoriented, protesters scattered away from the intersection.

Gomez went south on Las Vegas Boulevard, toward the courthouse, and officers lost sight of him, according to Jones.

He reappeared just before 11:20 p.m. outside the courthouse, where a large group of protesters, some apparently armed with baseball bats, had assembled. Officers gave a “dispersal order” on loudspeakers, and most of the crowd left the area, Jones said. But as a second group of officers arrived at the courthouse, Gomez walked north on Las Vegas Boulevard, along a wall, toward the officers staged at the top of the courthouse steps, setting in motion a series of fast-moving events that would end in his death.

Sam Stewart, a 29-year-old protester, pulled out his phone and began recording.

Meanwhile, the streets near Circus Circus were shut down in every direction. And because of the severity of Mikalonis’ injuries, homicide Lt. Ray Spencer and his team took over the investigation.

Officers combed the area for the suspect and surveillance cameras, leading them to the Travelodge, according to Samaniego’s arrest report. After viewing the footage, SWAT officers retraced the suspect’s route and found three 9 mm cartridge cases with FC Luger headstamps, one on Circus Circus Drive, where the shot was fired, and two on the second-floor landing of the motel.

About 2:30 a.m. Tuesday, a man matching the description of the shooter walked out of room No. 147 with a teenager. SWAT officers arrested them both.

Later that morning, during an interview at Metro’s headquarters, Samaniego told homicide detectives Dolphis Boucher and Robert Ochsenhirt that he had been in his motel room the entire night. But when confronted with the video evidence, according to his arrest report, Samaniego said “there were a lot of people causing problems with the protest and he was just trying to scare them into leaving.”

“Samaniego said he didn’t even know the police were there, that he had bad eye sight and he can’t see very far,” detectives wrote in the report.

During a search of room No. 147, investigators found a Glock 19 handgun loaded with 9 mm rounds with the same FC Luger headstamps found at the crime scene and more 9 mm cartridges in the toilet, according to the report.

Little is known about Samaniego, who, according to Justice of the Peace Melanie Tobiasson, “clearly wasn’t there to protest.” The Las Vegas native spent his 20th birthday Tuesday at the Clark County Detention Center.

Deadly use of force

Outside the federal courthouse, an officer, thinking that Gomez’s modified pistol was a baseball bat, fired five beanbag rounds after a brief conversation with Gomez.

In the days following the fatal shooting, Metro has claimed that Gomez reached for his weapon as he ran from the courthouse steps, prompting the four officers to shoot.

But Stewart, whose videos were shown during Metro’s media briefing on Friday, isn’t so sure.

“I think he was just trying to run from police,” Stewart told the Las Vegas Review-Journal, adding that Gomez might have been holding his modified pistol against his body to keep it from swinging around as he ran. “(I don’t know) if he aimed at police.”

Fryman, Emerton, Ferguson and Locher weren’t wearing body cameras, and Jones said the department had not located footage of Gomez raising the weapon as of Friday afternoon.

Mikalonis, Gomez and Samaniego all started their week on Las Vegas Boulevard. By the weekend, their lives and those of their families had changed dramatically.

Mikalonis remained hospitalized in critical condition, Gomez’s family was planning his funeral, and Samaniego was in jail, accused of attempted murder and being held on $1 million bail.