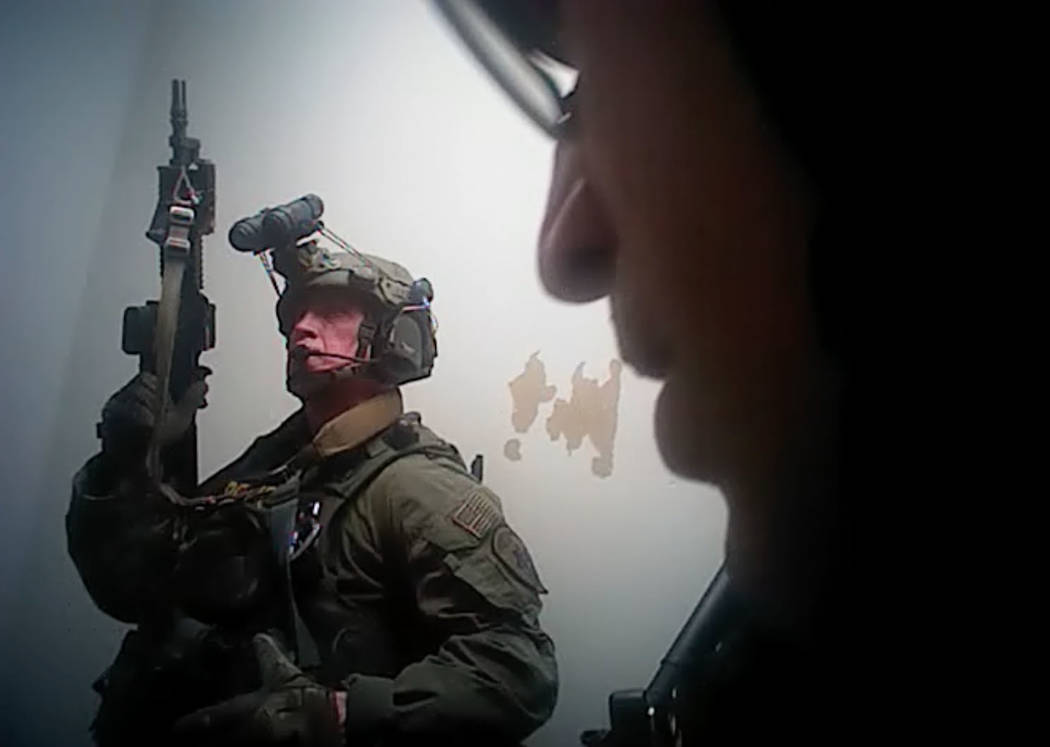 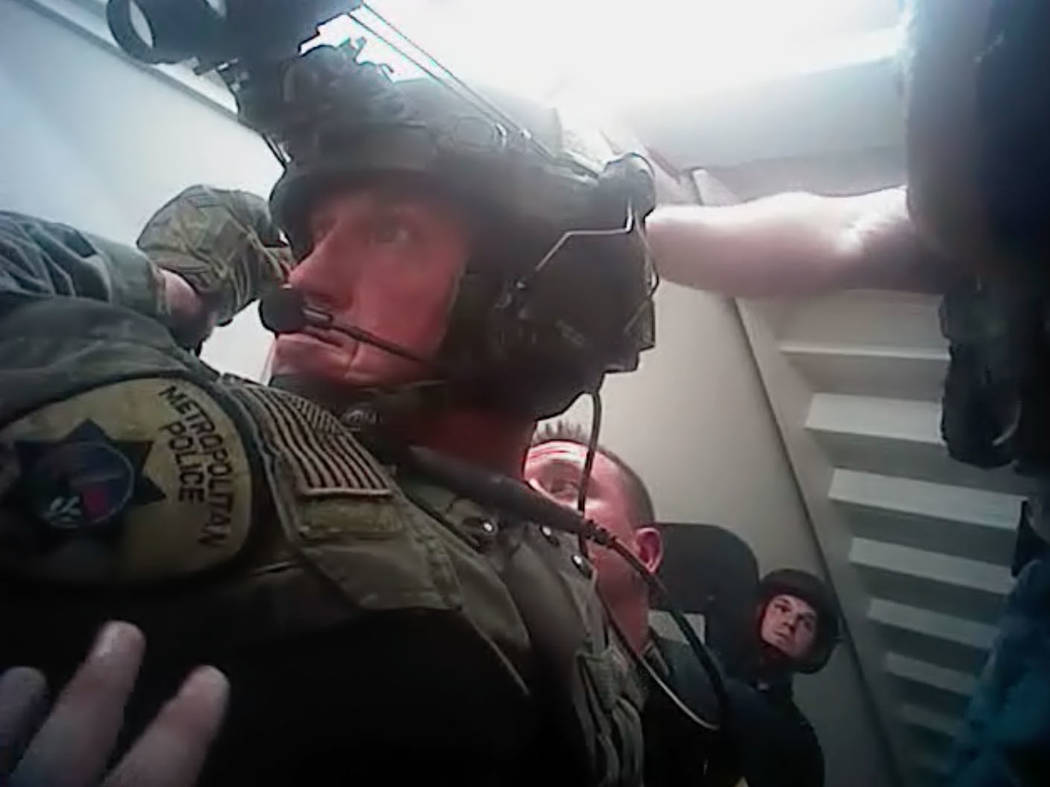 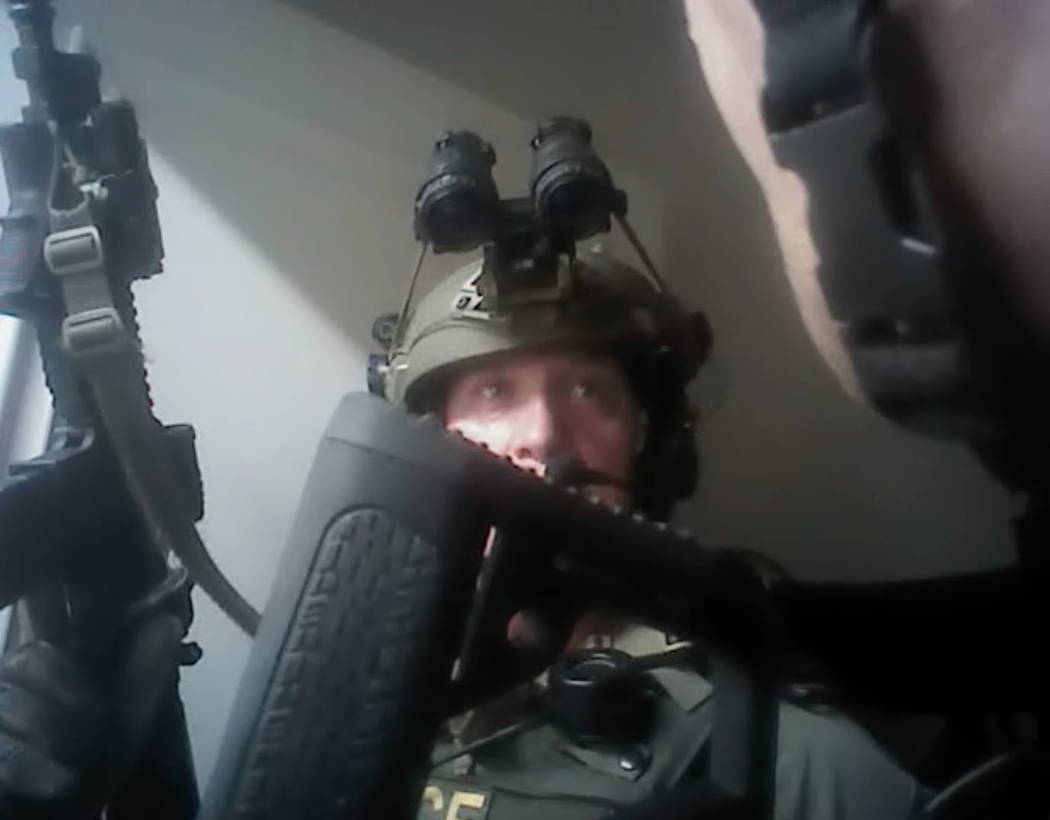 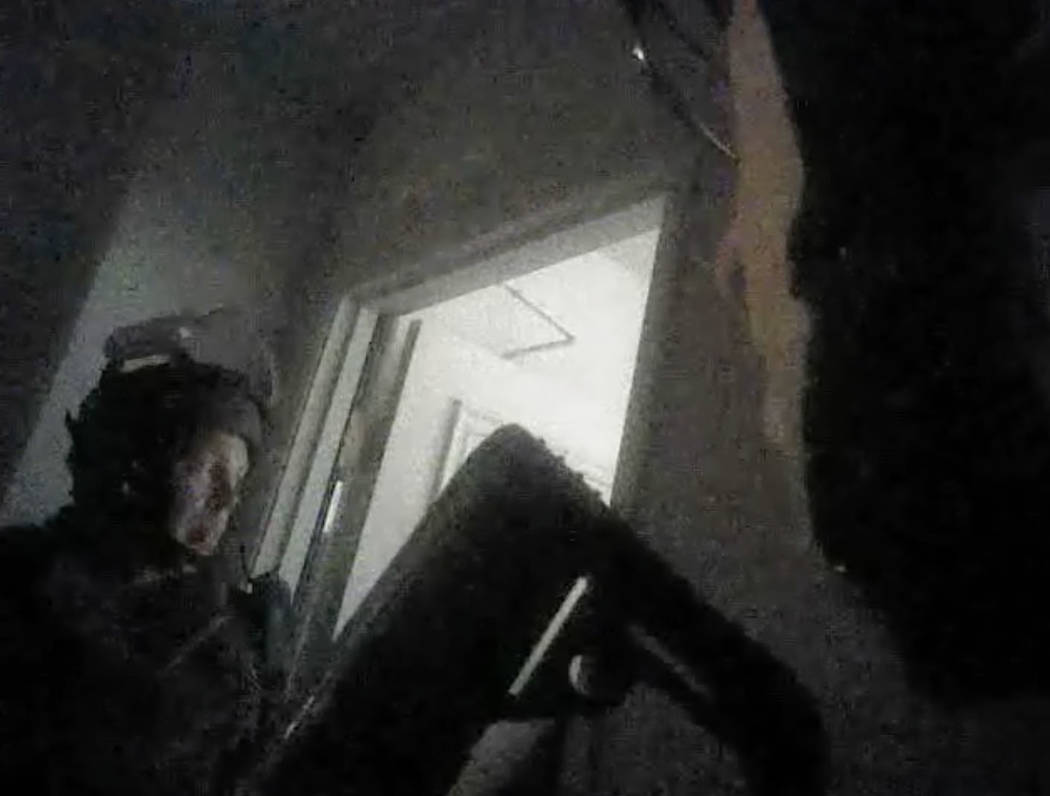 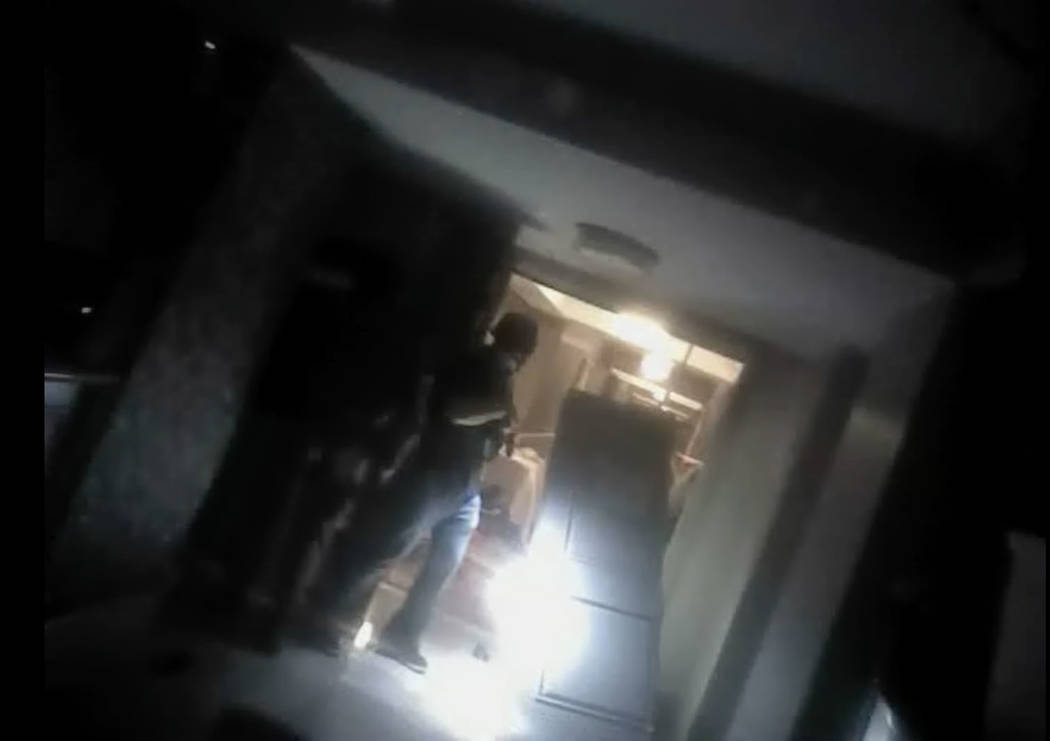 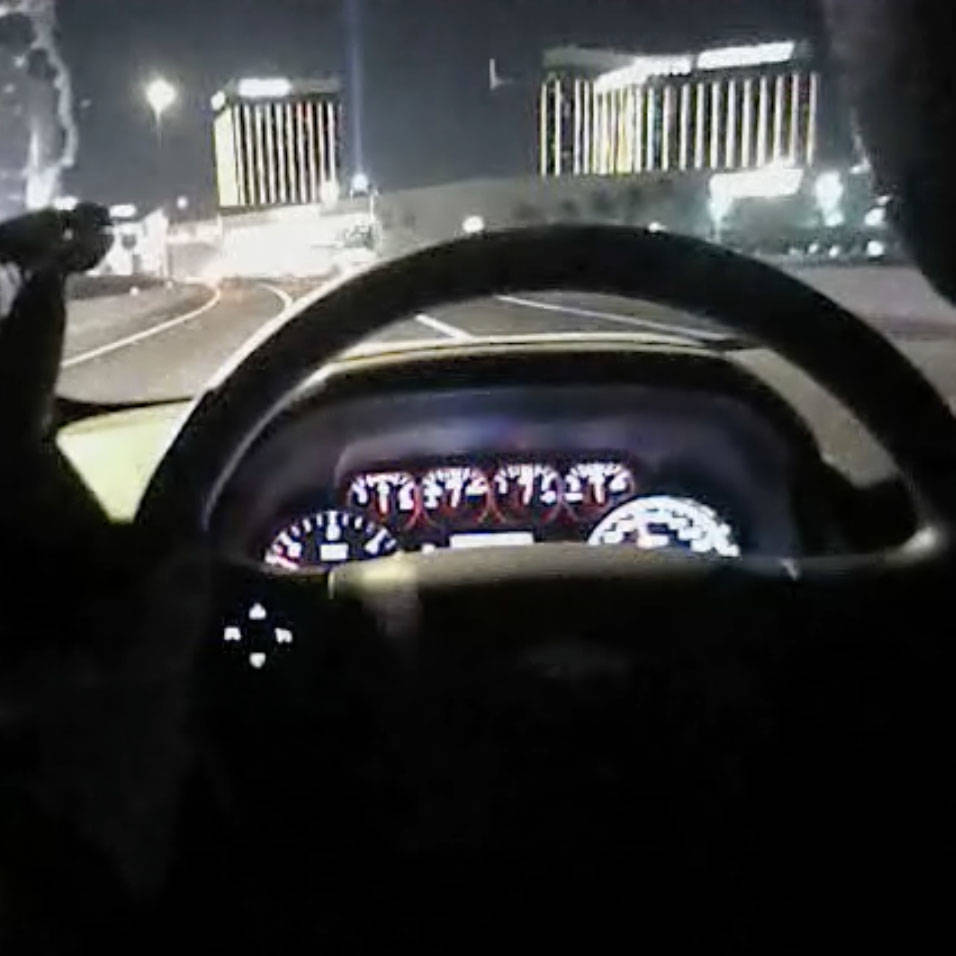 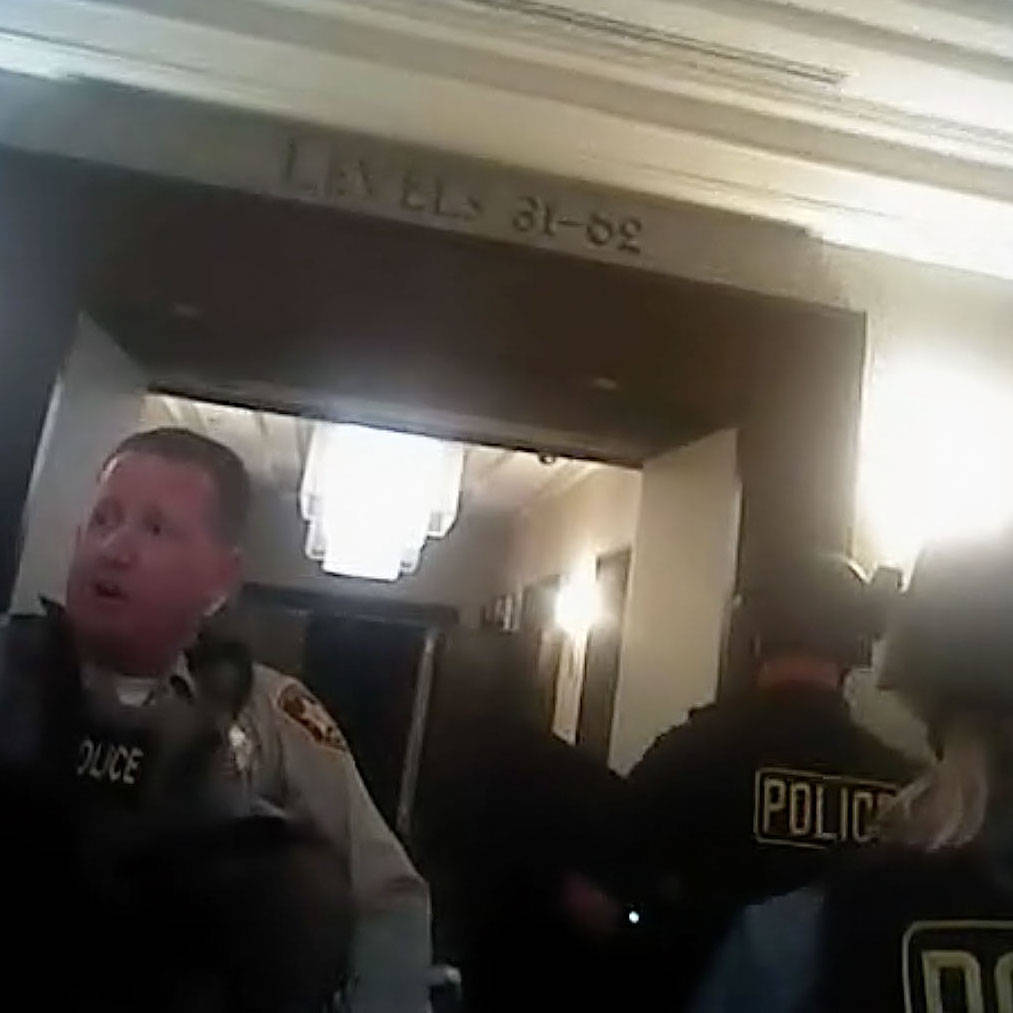 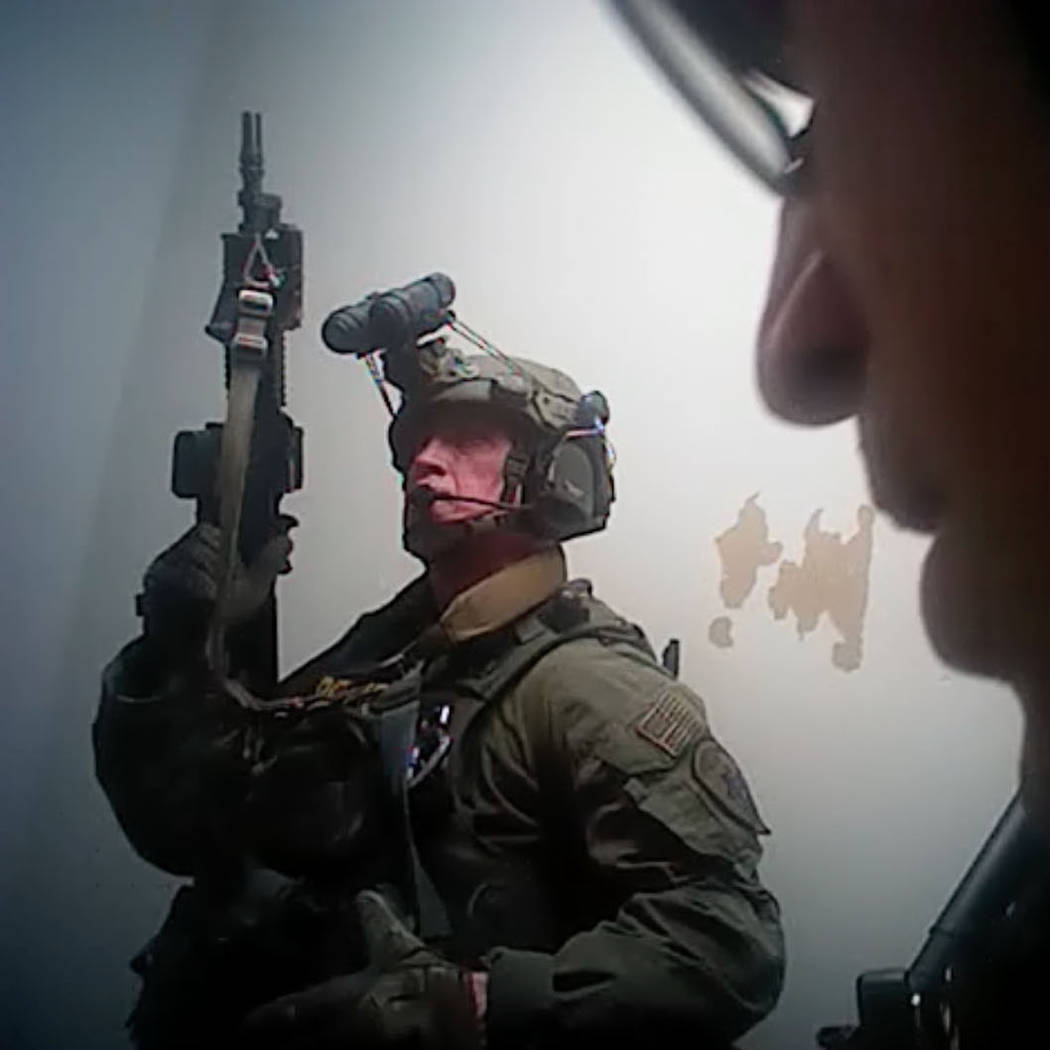 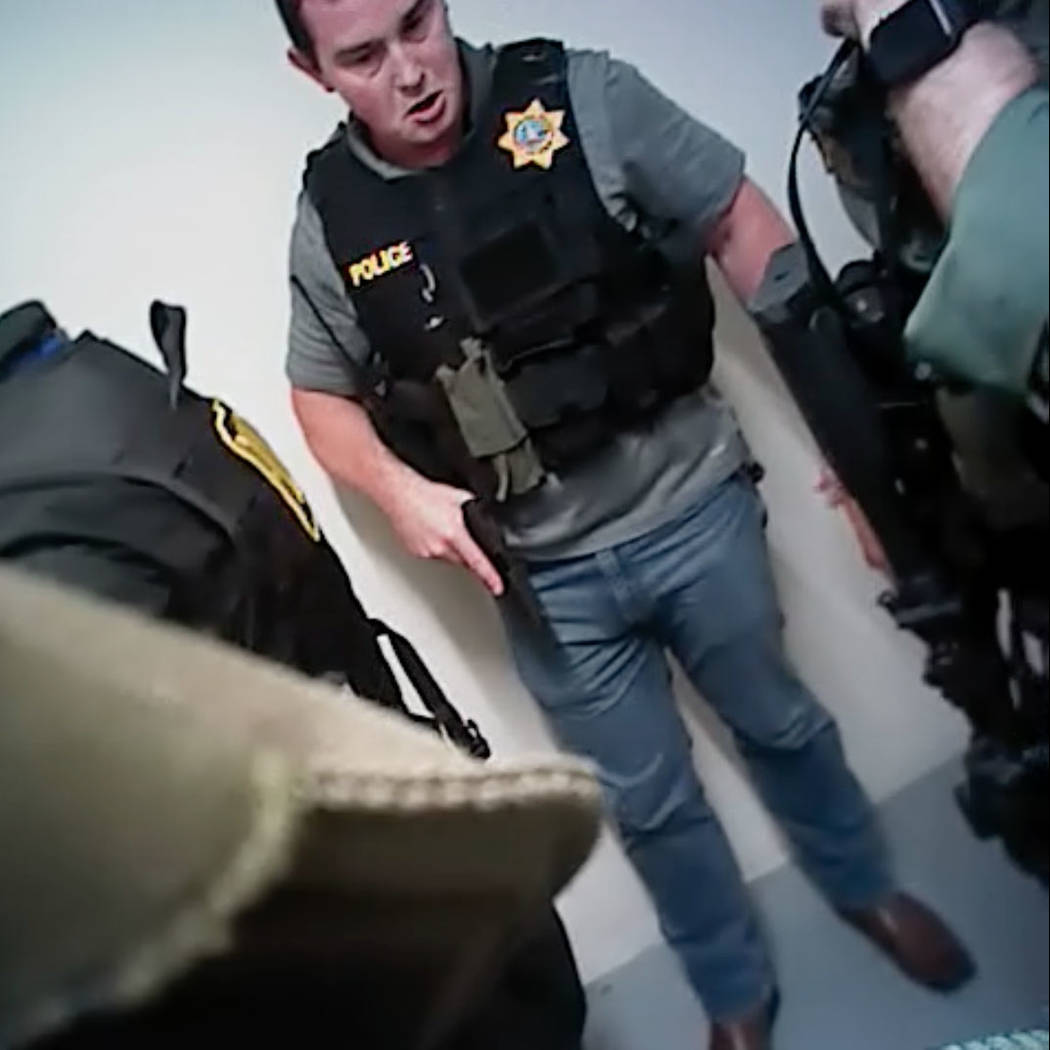 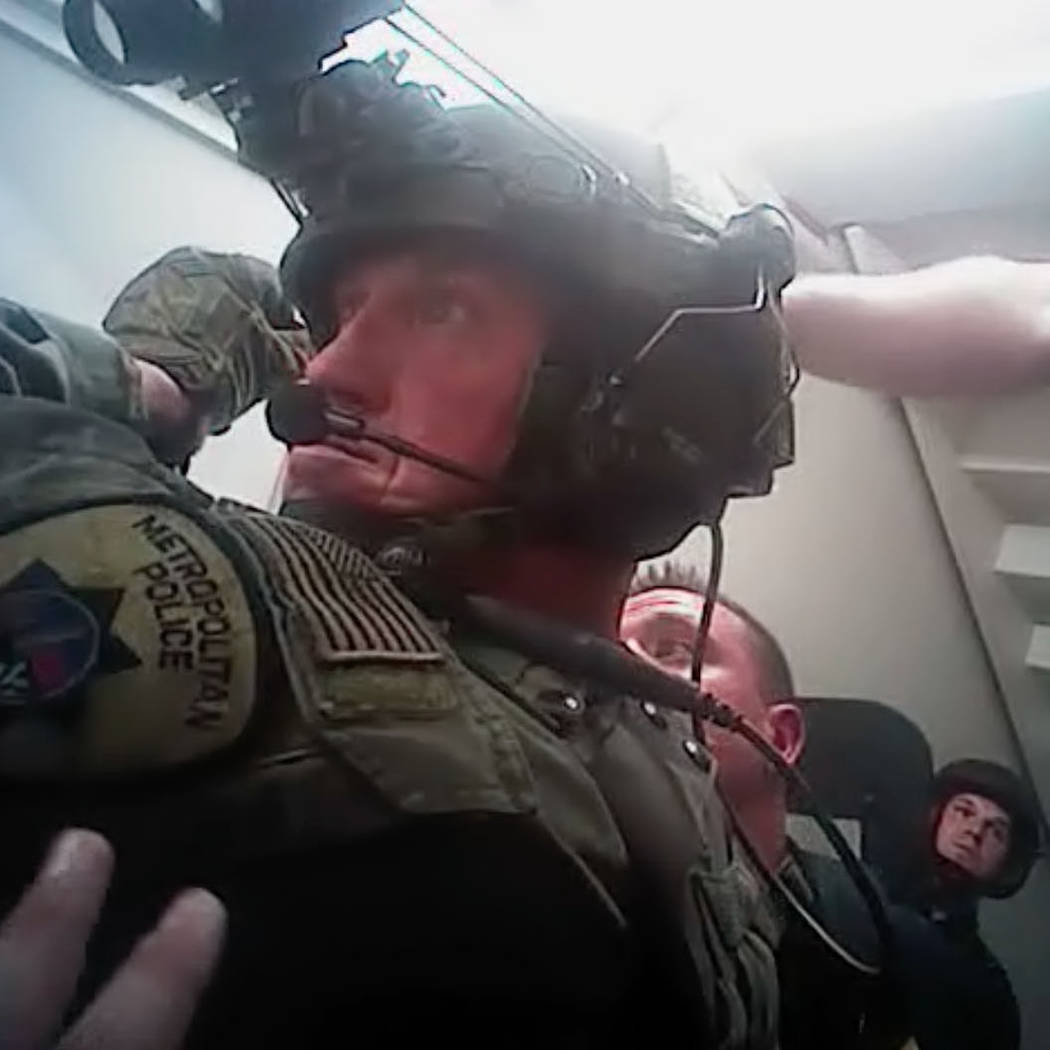 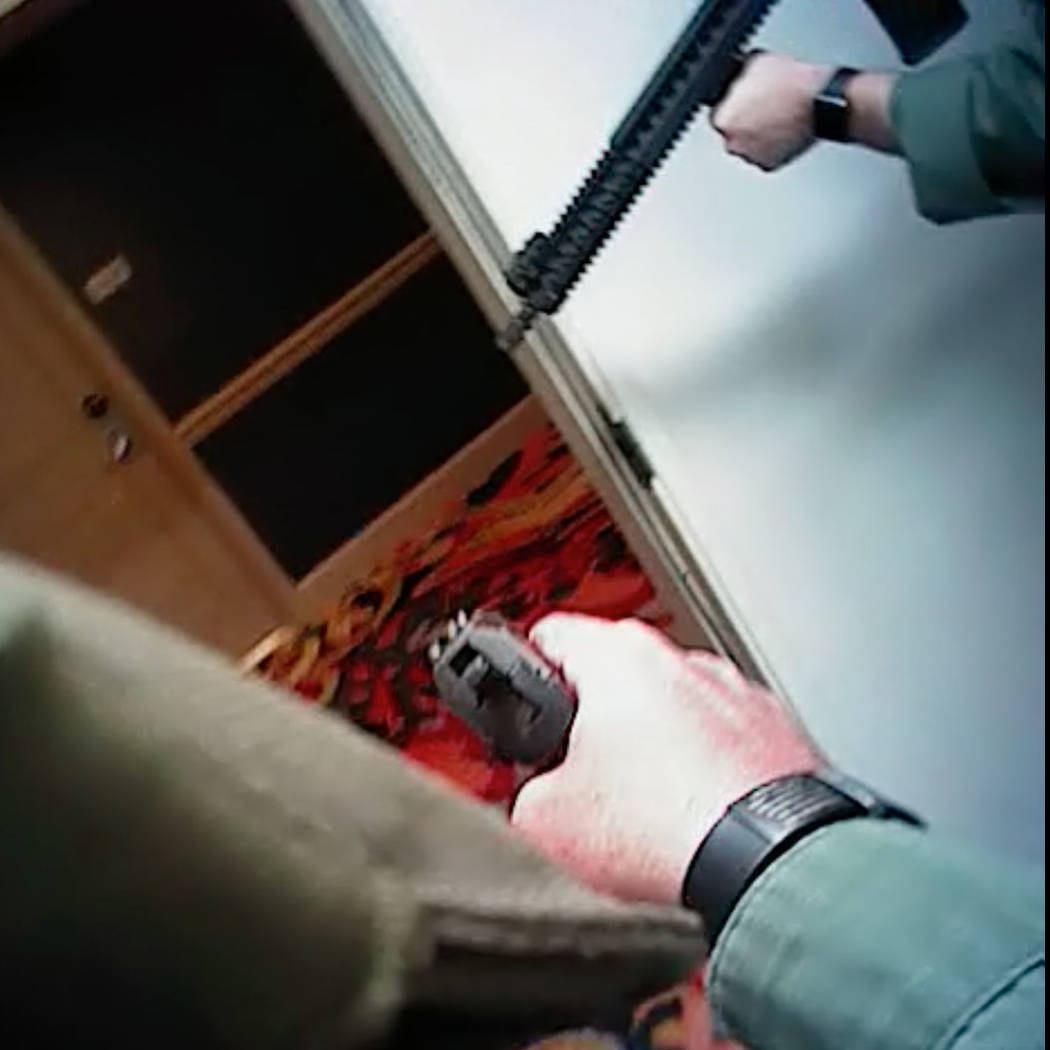 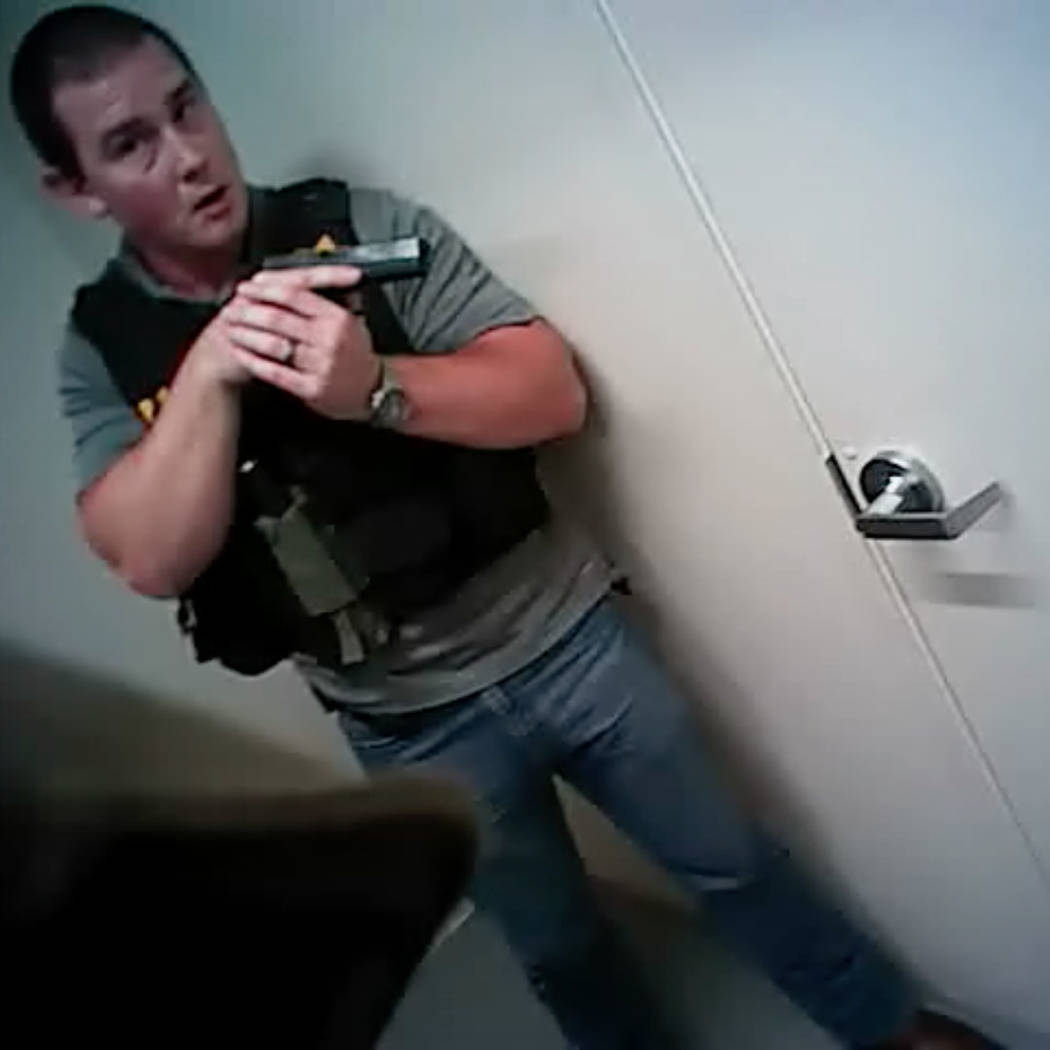 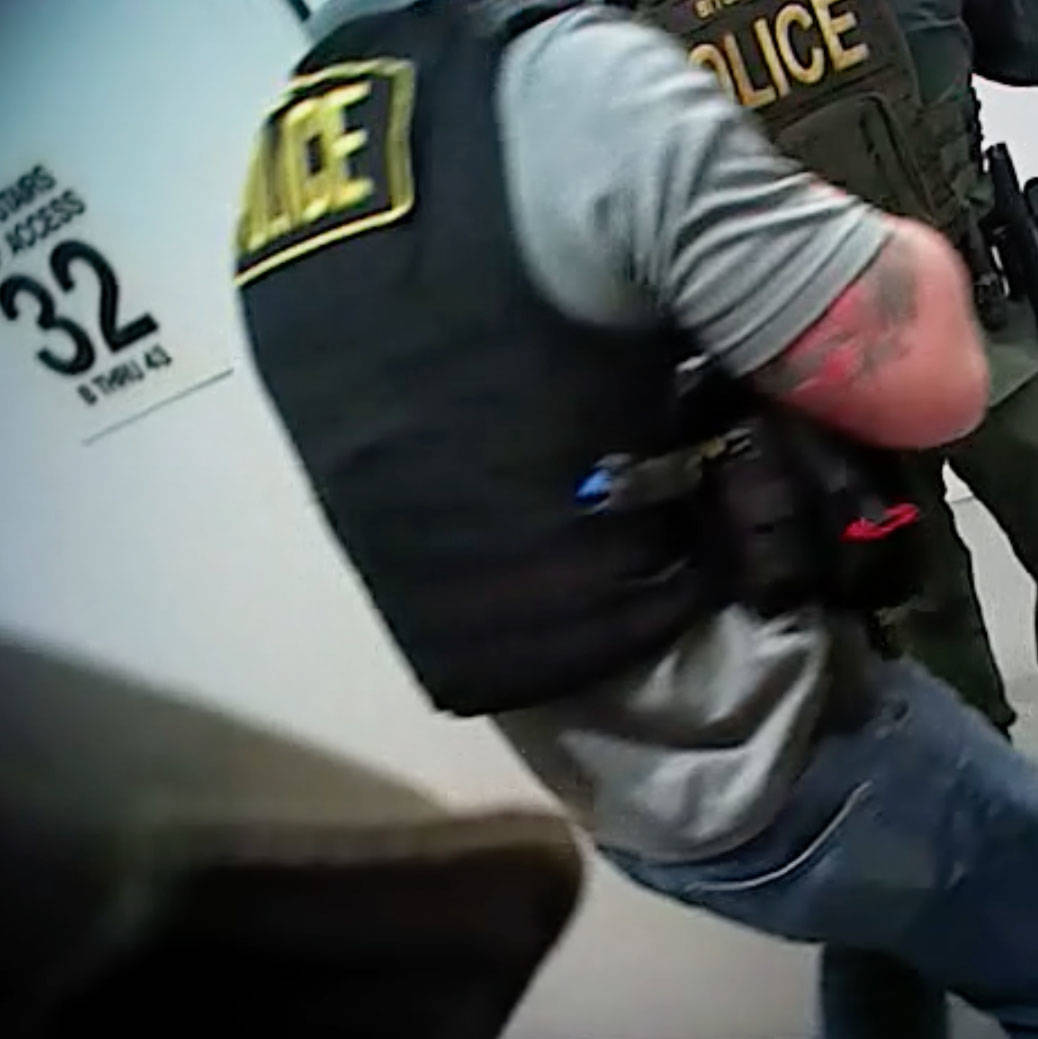 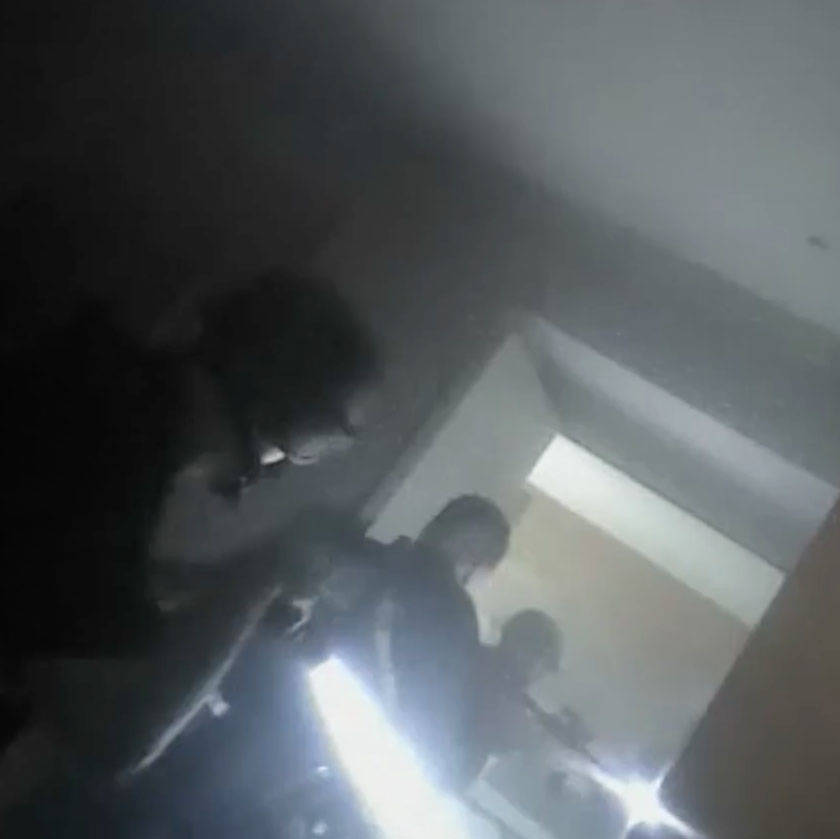 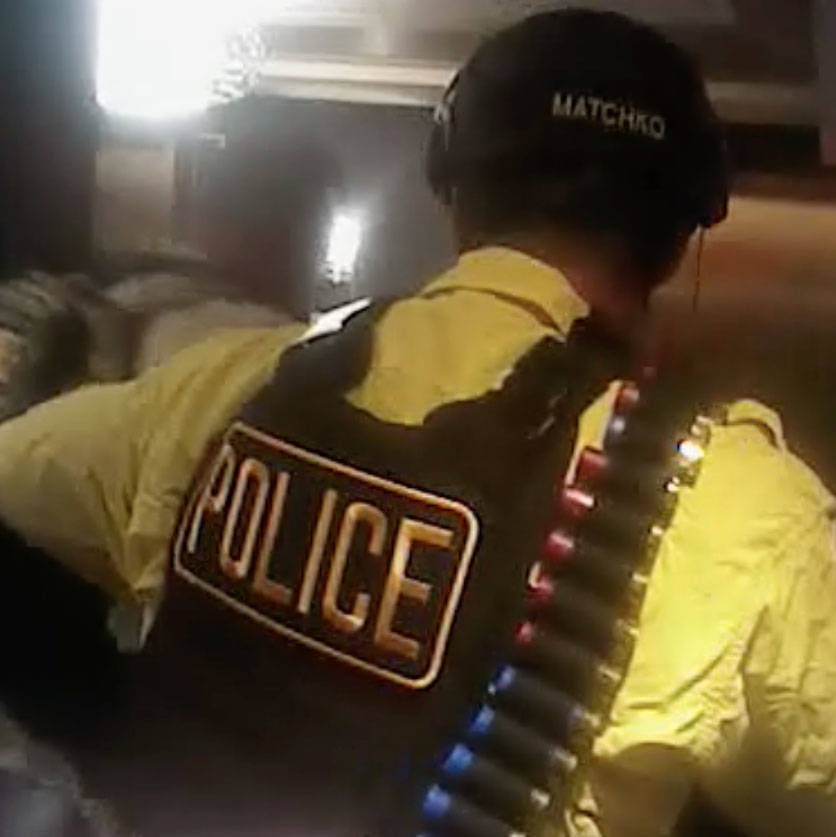 In a 32nd-floor stairwell outside the gunman’s Mandalay Bay suite, a group of officers shoot silent glances at one another and cover their ears.

It’s the night of Oct. 1, about an hour after Stephen Paddock opened fire on the Route 91 Harvest festival crowd, killing 58 people and wounding hundreds more. These officers are about to enter the suite that served as Paddock’s vantage point, and the moment can be seen in police body camera footage released Wednesday after a lengthy court battle.

The newly released videos, which amount to about two hours and 42 minutes of footage, grant the public its first peek into officers’ movements on the night of the tragedy. The Metropolitan Police Department is under court order to produce many more video records like it, as well as 911 calls from Oct. 1.

As the footage continues, a fire alarm begins blaring — a result of the explosive charge that blew Paddock’s door. The officers do not react to it.

Instead, together, they move slowly and quietly out of the stairwell. As one officer rounds the corner, he spots a rifle on the ground, just inside Paddock’s doorway — it’s one of 23 like it that police would soon find strewn about Paddock’s suite.

“On the ground, with a bipod, to the right,” the officer says, describing the weapon.

The first officer to enter the suite, Levi Hancock, did not activate his body camera, so the public will never see those first few seconds inside the room from which Paddock wreaked much of his havoc.

Instead, the footage comes from two K-9 officers — Sgt. Joshua Bitsko and David Newton. Both entered Paddock’s rooms a short time after Hancock. Paddock’s body already had been found on the floor.

Police did not say which videos belonged to which officer.

The videos, which were released in eight different segments — four for each officer — begin inside each officer’s respective squad car shortly after the tragedy began to unfold.

In one clip, through an officer’s windshield, the golden glow of Mandalay Bay grows brighter and brighter as he races closer and closer to the scene. In the background, police radio traffic describes the mass shooting scene as it grows progressively more dire.

Once inside the hotel, the officers walk the casino floor, guns drawn. They can be heard directing people to take cover and lock doors.

A short time later, the police in the casino link up in teams and begin their ascent on a guest elevator to the 28th floor. None of the footage released Wednesday shows any scenes from the festival venue.

As officers work to clear floors and evacuate guests, a brief confrontation is caught on video — with other officers.

It happens as one team rounds into the hallway of the 29th floor and runs right into another group of people with guns drawn — a different team of Metro officers.

After the brief moment of tension, an officer from the first team instructs the other team to stay on the 29th floor and finish clearing rooms “so we’re not aiming guns at each other.”

“Copy that!” another says.

Then the first team heads to the 32nd floor.

Shortly after the first breach, police regather in Paddock’s suite and prepare to set off a second explosion — this time on the connecting door between the already cleared suite and the second room Paddock rented.

Just like the first time, a loud boom goes off. But this time, just after the blast, a SWAT officer fires what police previously described as a negligent, three-round burst from his rifle. It can be heard on the newly released video.

“Where did that other shot come from?” an officer asks. “Was that us?”

In a report issued in January, Las Vegas police identified a “SWAT officer O’Donnell” as the officer who fired the rounds.

“We need to get Mesquite (police) over to his address,” one officer says.

Paddock shared a home in Mesquite with Danley, his girlfriend. Police have said she had no involvement in the mass shooting.

In the days after the tragedy, the Las Vegas Review-Journal and other media organizations requested all body camera footage and 911 calls from the mass shooting. The department denied the request, and a court battle ensued.

A Clark County district judge ruled in February that the records should be released. He gave Metro 30 days to comply. But Metro contested, saying it would take much longer to produce the records and that it would cost hundreds of thousands of dollars.

In March, the same judge gave Metro a total of six months to fulfill the request but ordered the department to immediately begin releasing the records on a “rolling basis.” The judge also ruled that the department could not charge journalists exorbitant fees to produce the records.

Metro appealed to a different district judge and then to the Nevada Supreme Court. On Friday, a Supreme Court decision compelled Metro to begin releasing the footage and audio.

In January, the Review-Journal and other media organizations successfully sued for the release of search warrant and autopsy records from the Oct. 1 shooting.

A previous version of this story incorrectly identified the officer who fired three rounds in the gunman’s suite.