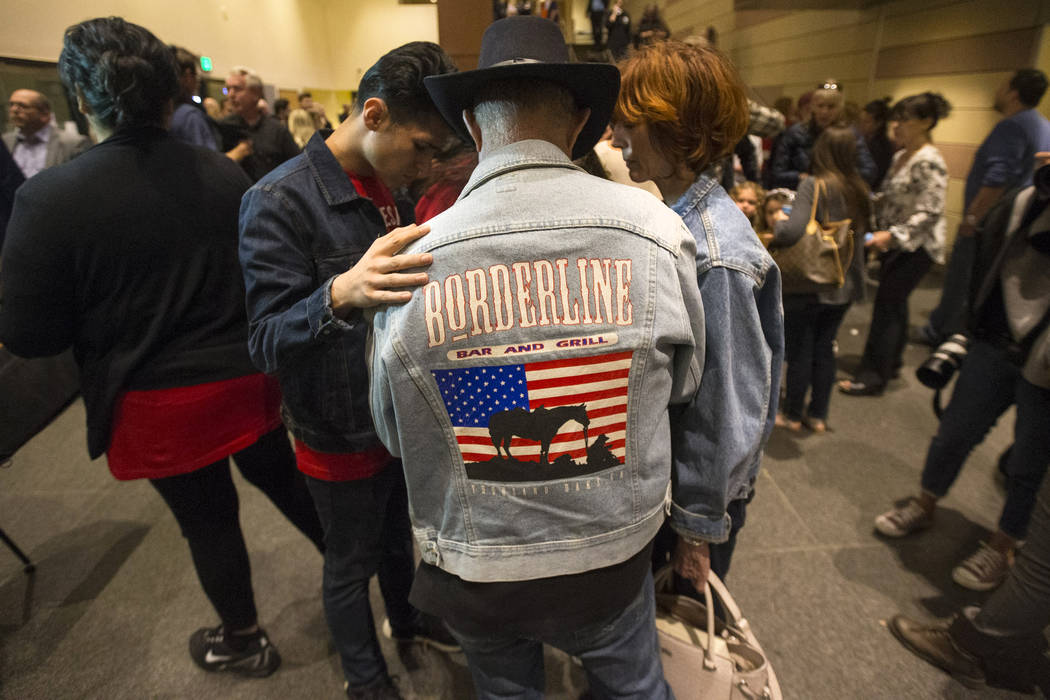 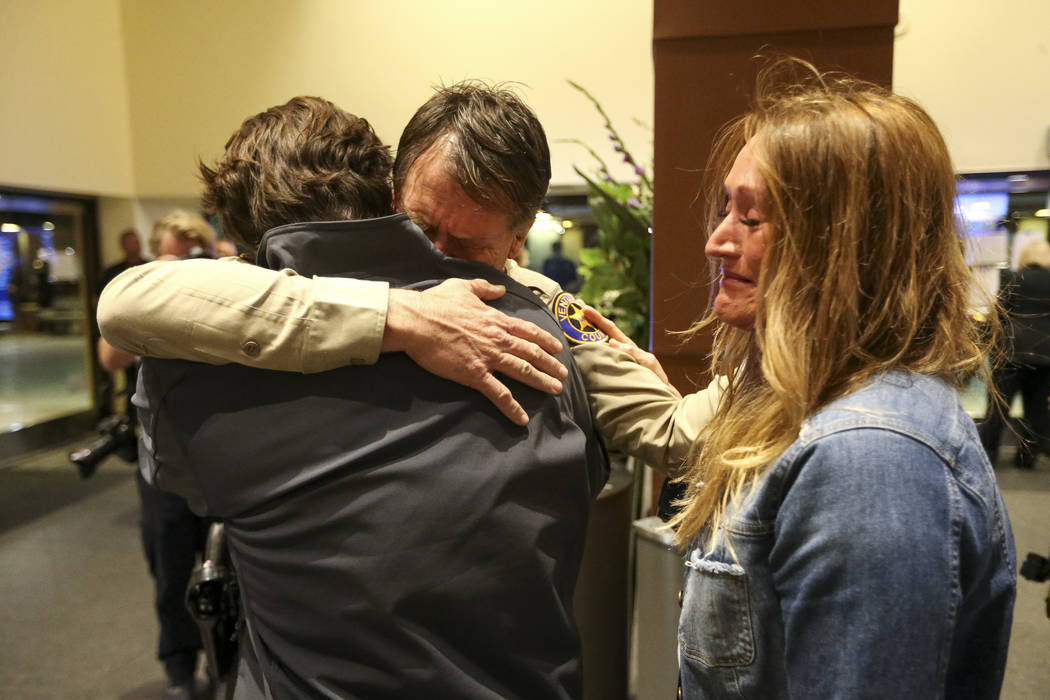 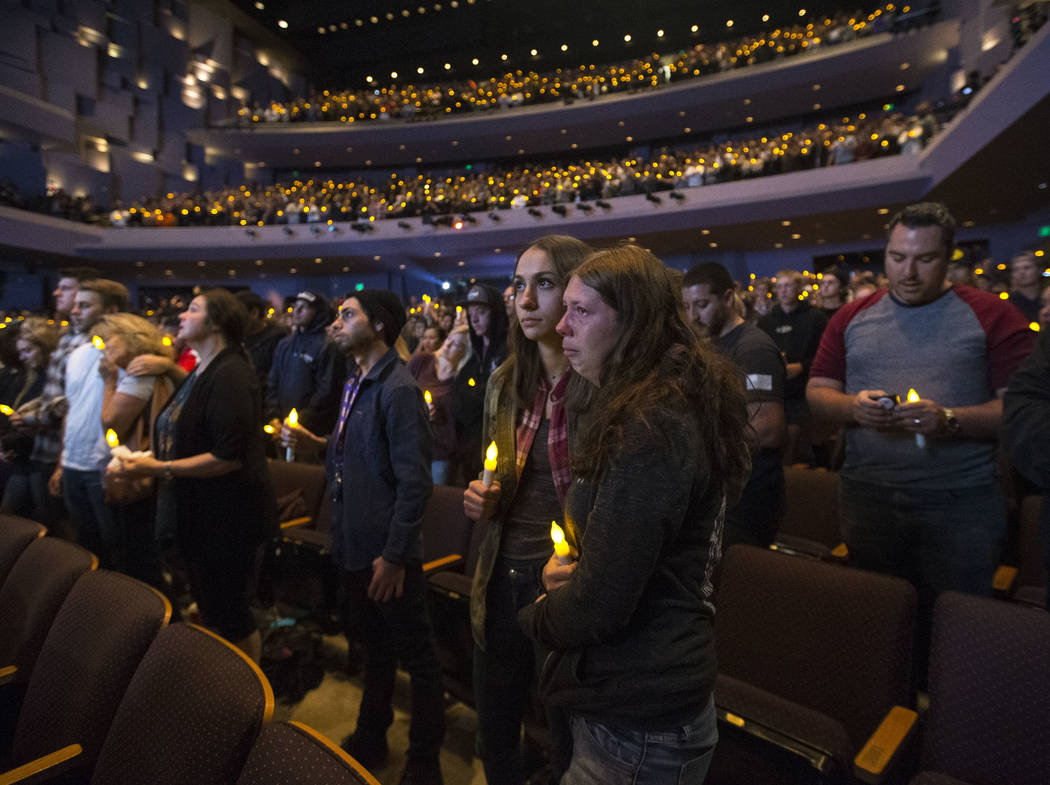 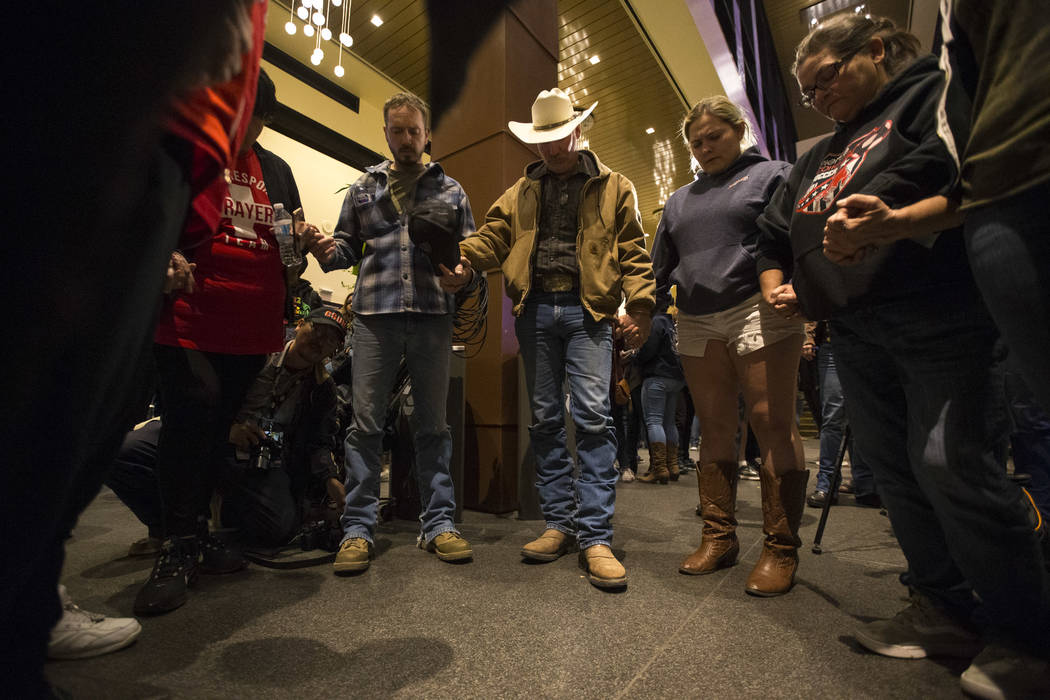 People hold hands in prayer for the victims of the Borderline Bar and Grill mass shooting during a candlelight vigil in Thousand Oaks, Calif., on Thursday, Nov. 8, 2018. Richard Brian Las Vegas Review-Journal @vegasphotograph 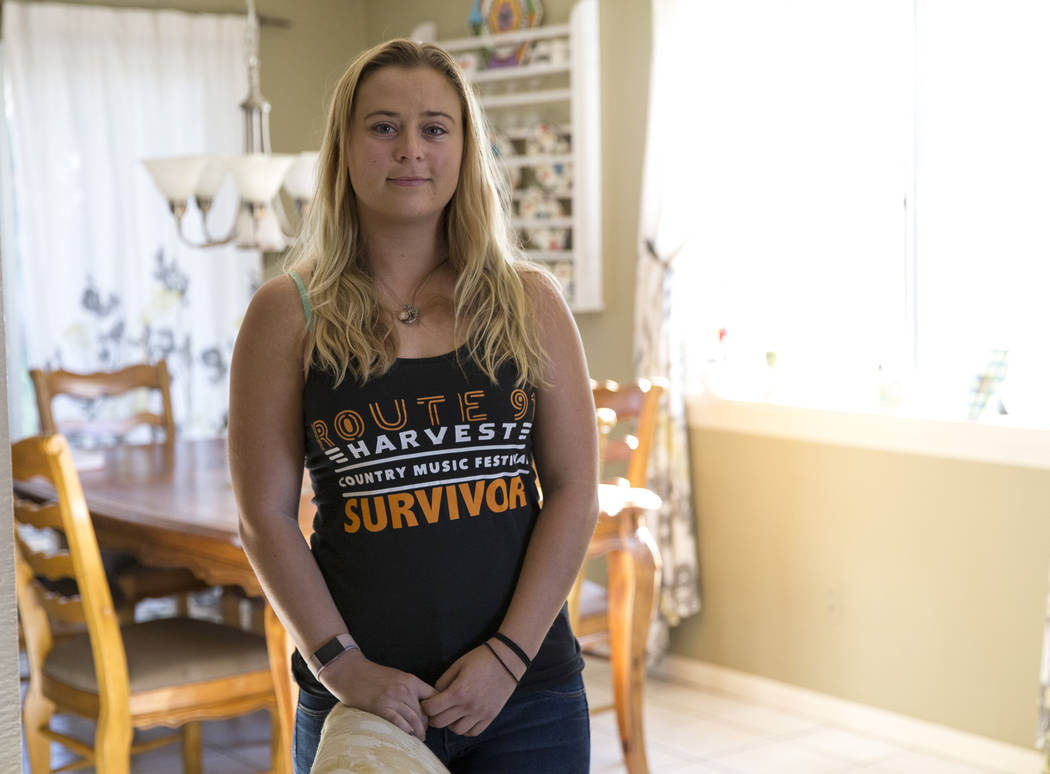 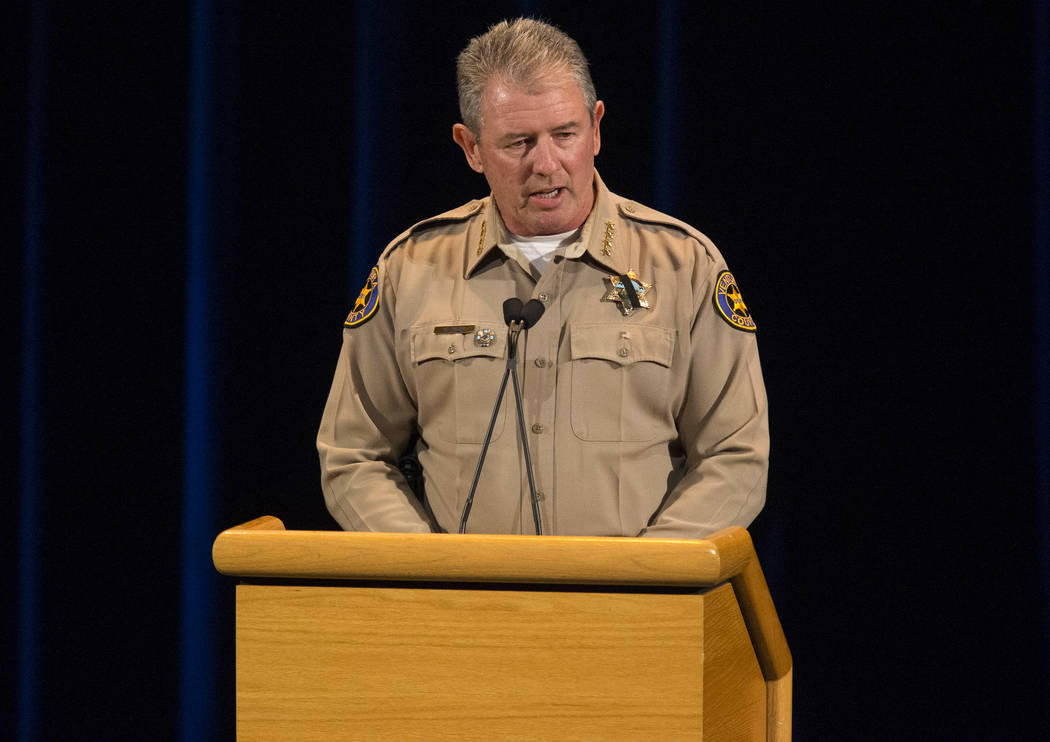 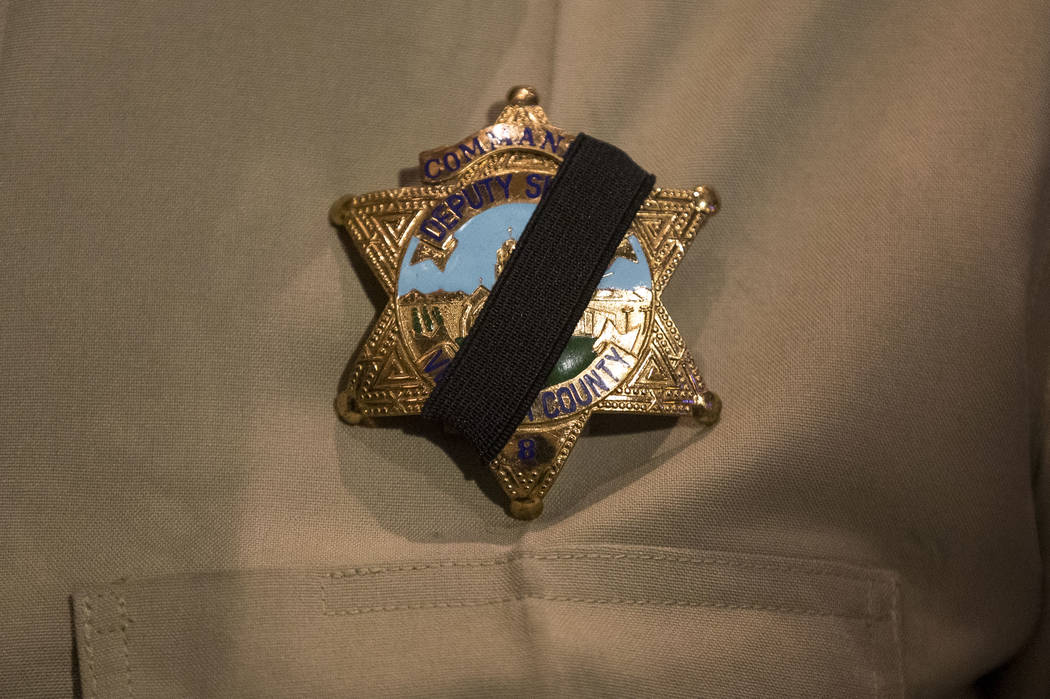 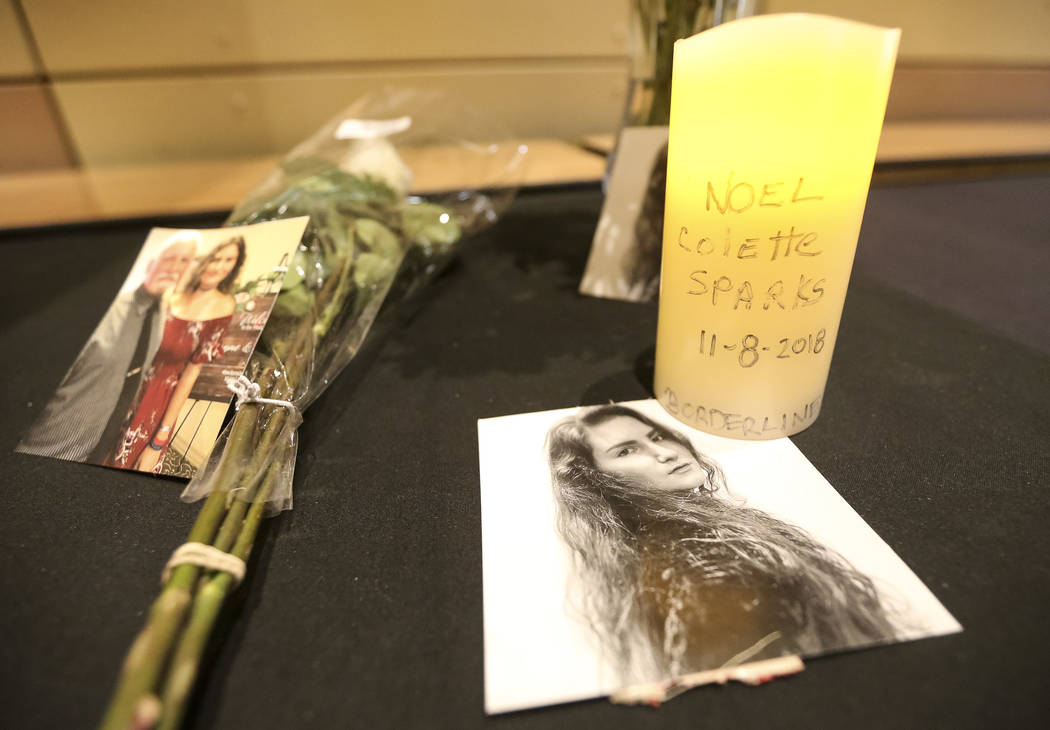 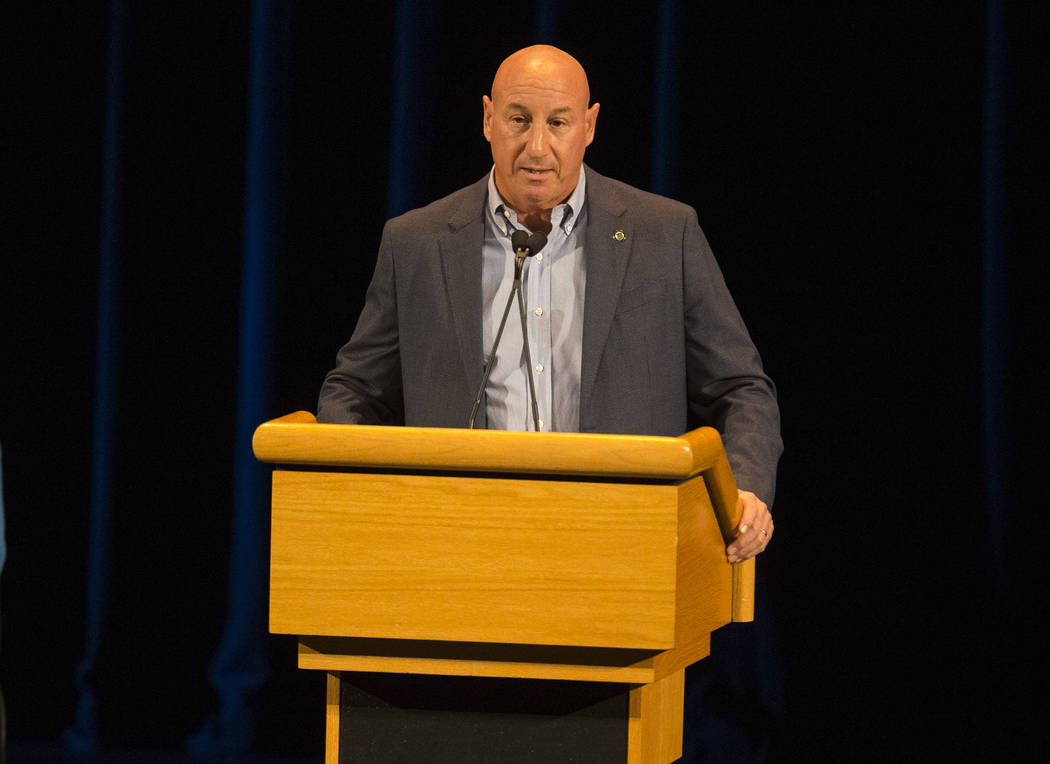 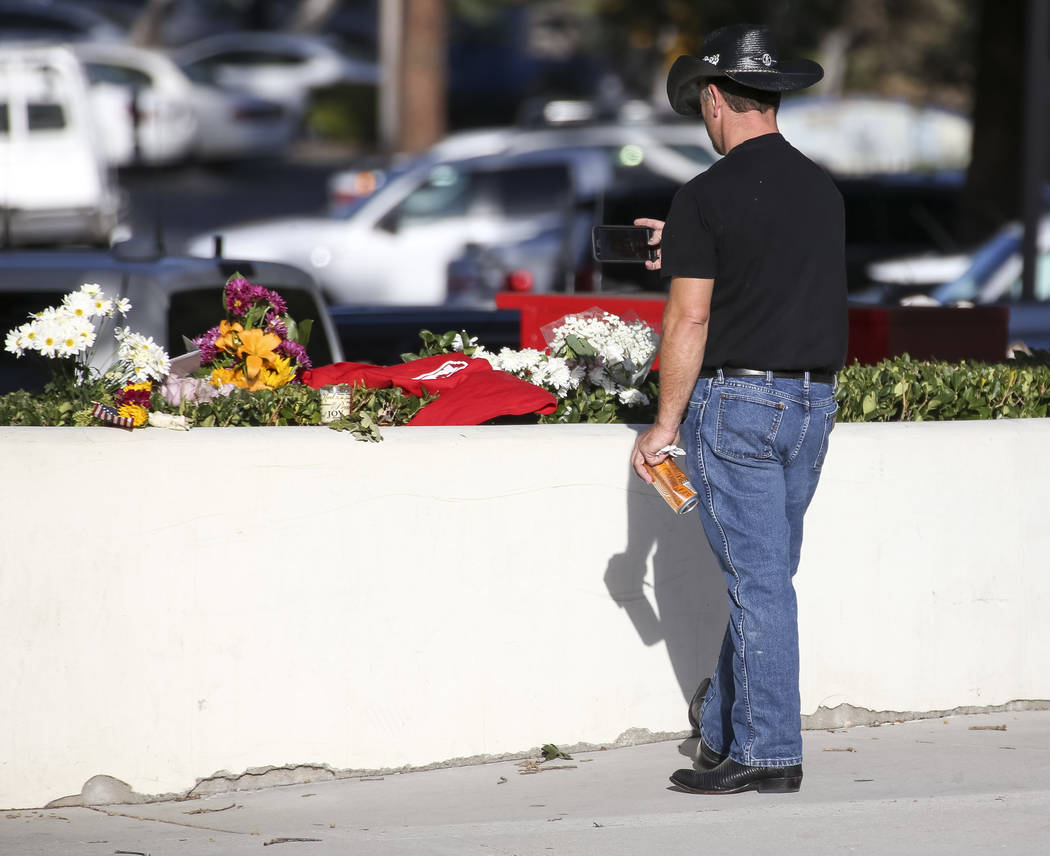 A man takes a photo of items at a memorial for victims of the Borderline Bar and Grill mass shooting in Thousand Oaks, Calif., on Thursday, Nov. 8, 2018. Richard Brian Las Vegas Review-Journal @vegasphotograph 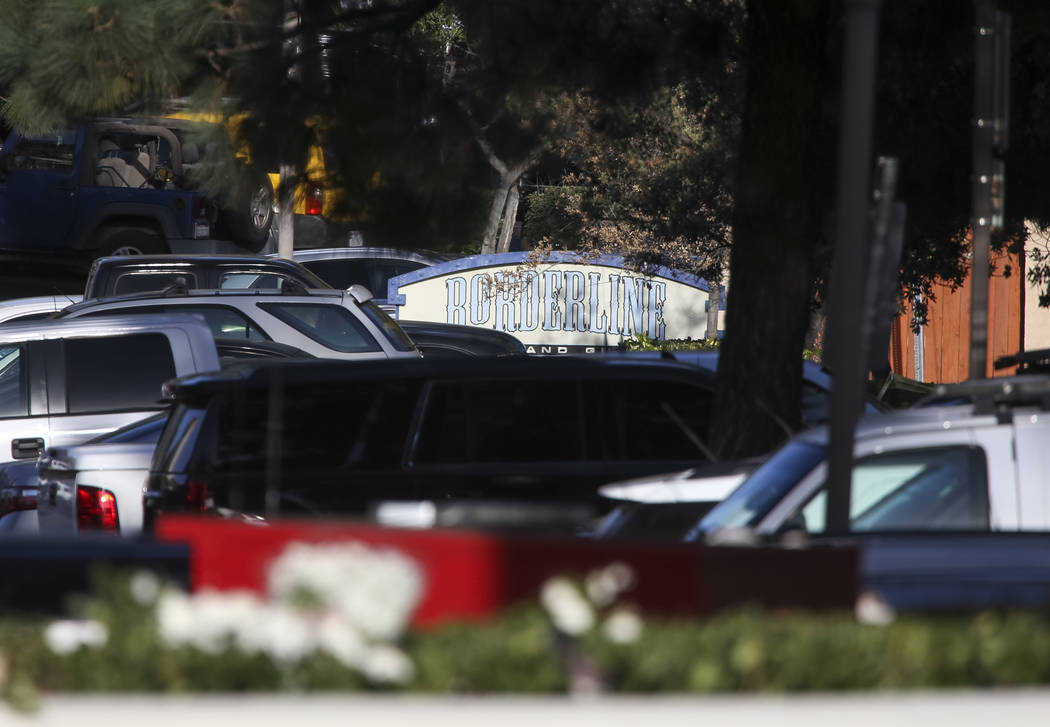 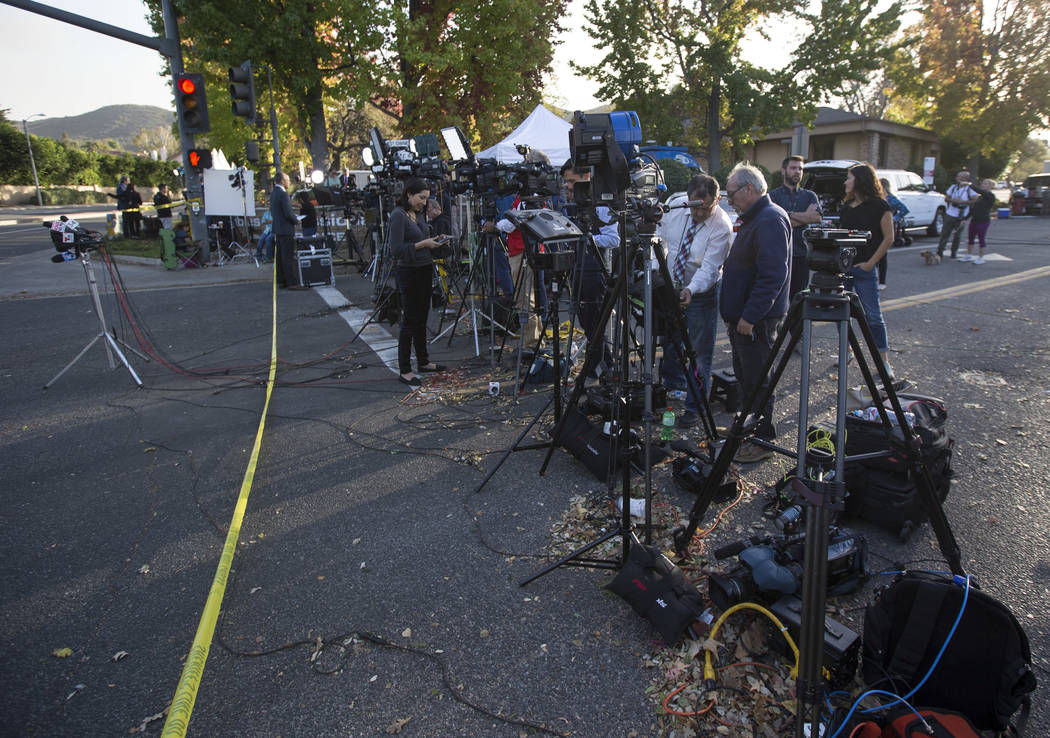 Members of the media gather near the site of the Borderline Bar and Grill mass shooting in Thousand Oaks, Calif., on Thursday, Nov. 8, 2018. Richard Brian Las Vegas Review-Journal @vegasphotograph

“Around there, I wasn’t a victim. I was just another person,” a teary-eyed Jessica Maldoon said Thursday afternoon inside her home in Simi Valley, about 20 minutes outside Thousand Oaks. “I think the bar was a huge part of what helped me, knowing we had that place where we could go and still find a way to have fun and enjoy ourselves and know that we’re surrounded by people who 100 percent understand.”

Just over a year ago, Maldoon had survived the gunfire that killed 58 people at the Route 91 Harvest music festival. Back home, the Borderline Bar and Grill — a favorite among locals — had become something of a home away from home for her and many other Las Vegas shooting survivors in Ventura County.

But that image of a safe haven was shattered Wednesday night, Maldoon said, when a gunman later identified as a former Marine ignited a smoke device inside the bar before opening fire with a handgun. The shooting left 13 dead, including the gunman.

Maldoon had made a last-minute decision Wednesday evening to skip out on college night at her favorite bar, but the same feeling of panic and dread she felt Oct. 1, 2017, came rushing back all the same when she got the call about the shooting.

Her friends were there, she said, and five of them also were Las Vegas shooting survivors. It took Maldoon hours to confirm, but her friends had again survived.

Not all Route 91 survivors made it out alive. Telemachus Orfanos was identified Thursday as one of the victims. He was 27.

His mother demanded gun control when she spoke to the Las Vegas Review-Journal on Thursday, not long after learning her son had been killed.

“Print that in the largest letters you can. Can you do that for me?” Susan Orfanos shouted, her voice cracking. “If one more person sends me thoughts or prayers. We have lost too many kids. I want gun control. That’s all I have to say.”

Gunman Ian David Long, 28, opened fire about 11:15 p.m. Wednesday, less than an hour after the Borderline kicked off its final group dance lesson of the night.

He was armed with a Glock 21, a .45-caliber handgun designed to hold 10 rounds plus one in the chamber. But Ventura County Sheriff Geoff Dean has said the gun had an extended magazine that is illegal in California, although Dean said he does not know how many rounds that magazine can hold.

The shooting ripped through the bar’s weekly College Country Night, where patrons 18 and older are welcomed to the “biggest dance floor in town,” according to the bar’s website. Last year, in the wake of the Las Vegas attack, the same bar hosted a “Country Strong” benefit concert to raise money for local Route 91 victims.

Among those killed in Wednesday’s shooting was Sgt. Ron Helus of the Ventura County Sheriff’s Department, who was shot multiple times as he and a California Highway Patrol trooper exchanged gunfire with the shooter.

Just before the shooting, Helus had been on the phone with his wife when he told her, “Sweetheart, I gotta go. Gotta handle a call,” Thousand Oaks Mayor Andy Fox said Thursday night during a candlelight vigil inside City Hall’s massive theater.

Afterward, outside City Hall, community members embraced each other, crying and praying — some wearing shirts and jackets that said “Route 91 strong” in orange letters.

“I have to go connect with my people,” one survivor told the Review-Journal, her mascara smudged from crying.

Thousand Oaks was where one of the 58 Las Vegas victims grew up.

Laura Shipp, a 50-year-old single mother, was living in Las Vegas with her son when she died Oct. 1, 2017. But her younger brother, Steve, still lives in Thousand Oaks. He told the Review-Journal that the Borderline was a staple for the Shipp siblings growing up, especially Laura.

“It’s a tough nut to swallow, to see something like that happen so close to home,” Shipp, 48, said in a telephone interview.

The brother did not have any direct connections with those inside the bar Wednesday night. But when he turned on his TV early Thursday, he felt for the frantic Jason Coffman, who was trying to find his 22-year-old son, Cody.

As Shipp watched, he saw the dad desperately flash pictures of his son to TV news crews. Hours later, he would learn the young man had died.

“And then you remember Laura’s situation. That was the toughest for us — 36 hours of waiting to find out what we probably knew the bad news of,” Shipp said. “I definitely know what this town and those associated with the victims are going to be going through this next year, and beyond. I don’t wish it on my worst enemy.”

Maldoon, who is just 24 but already has been personally affected by two mass shootings in her lifetime, had trouble Thursday describing what she felt.

“I just don’t understand why this keeps happening and why we can’t get to the root of the problem instead of dancing around the topic and pointing fingers in different directions,” she said. “It is not OK to live like this. It is not OK to walk onto your campus and think this might be your last day on Earth. It’s not OK to go to a concert and think you might never see your family again.”

As she fiddled with her fingers in her lap, she also wondered what impact Wednesday’s shooting would have on her recovery.

“I’m not sure if this will set me back or if it’ll just remind me that this is still something that could happen every day. I still have anxiety everywhere I go, and every time I step out that door,” she said, glancing at the front door of her home, “I pray it’s not the last time.”

On Thursday, President Donald Trump ordered American flags to be lowered to half-staff until sunset Saturday.

A vigil for the Thousand Oaks victims will be held at 6:30 p.m. Friday at the Las Vegas Community Healing Garden, 1015 S. Casino Center Blvd.