RJ App
Vegas News, Alerts, ePaper
OPEN
Sonny Melton was killed in the hail of gunfire that rained down from the 32nd floor of the Mandalay Bay Resort and Casino.
By Brian Joseph Las Vegas Review-Journal
October 2, 2017 - 1:25 pm 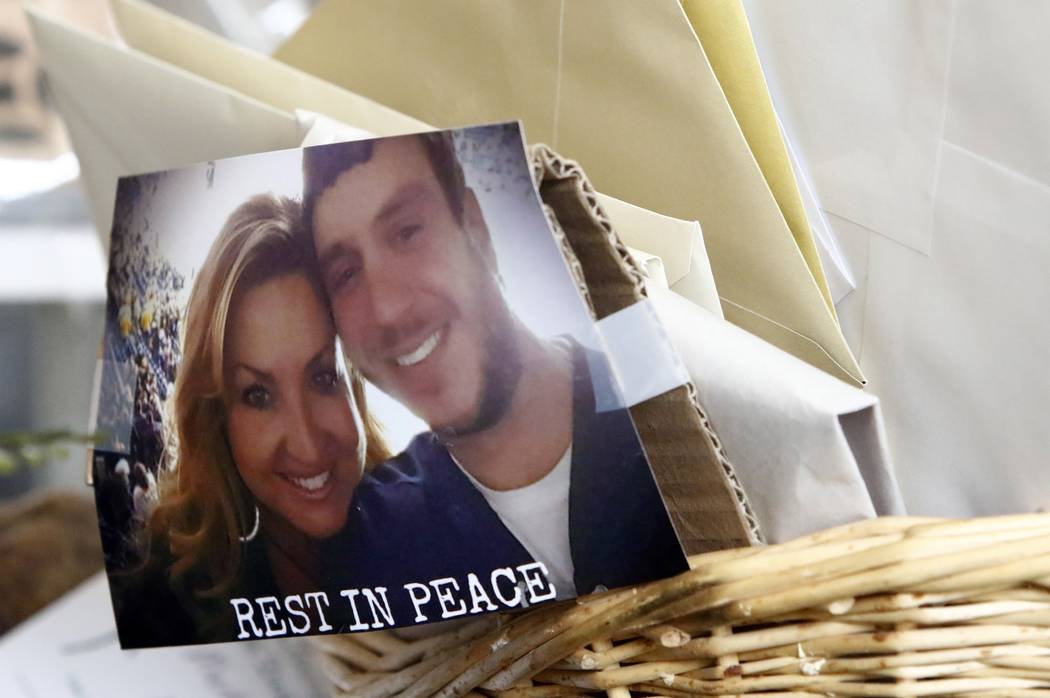 A photo of Sonny Melton and his wife, Heather is seen tapped to a basket of cards and letter before the funeral for Sonny Melton Tuesday, Oct. 10, 2017, in Big Sandy, Tenn. Melton, of Paris, Tenn., was one of the victims who died in the Oct. 1 mass shooting in Las Vegas. (Wade Payne/AP) 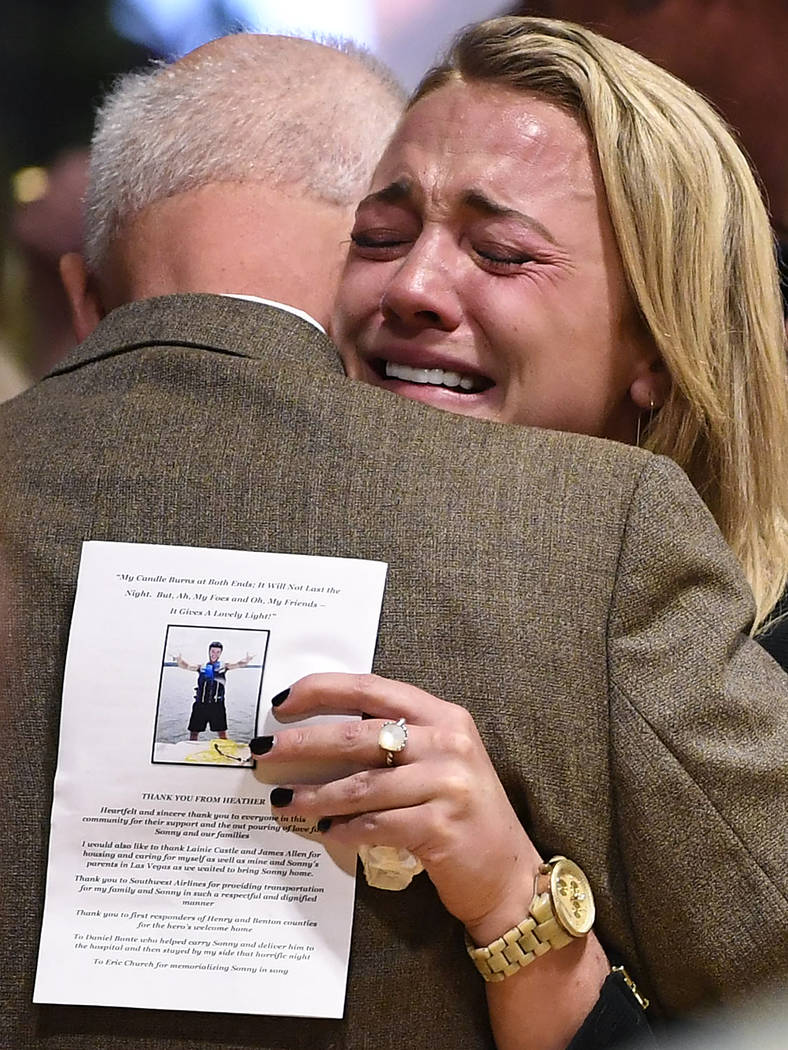 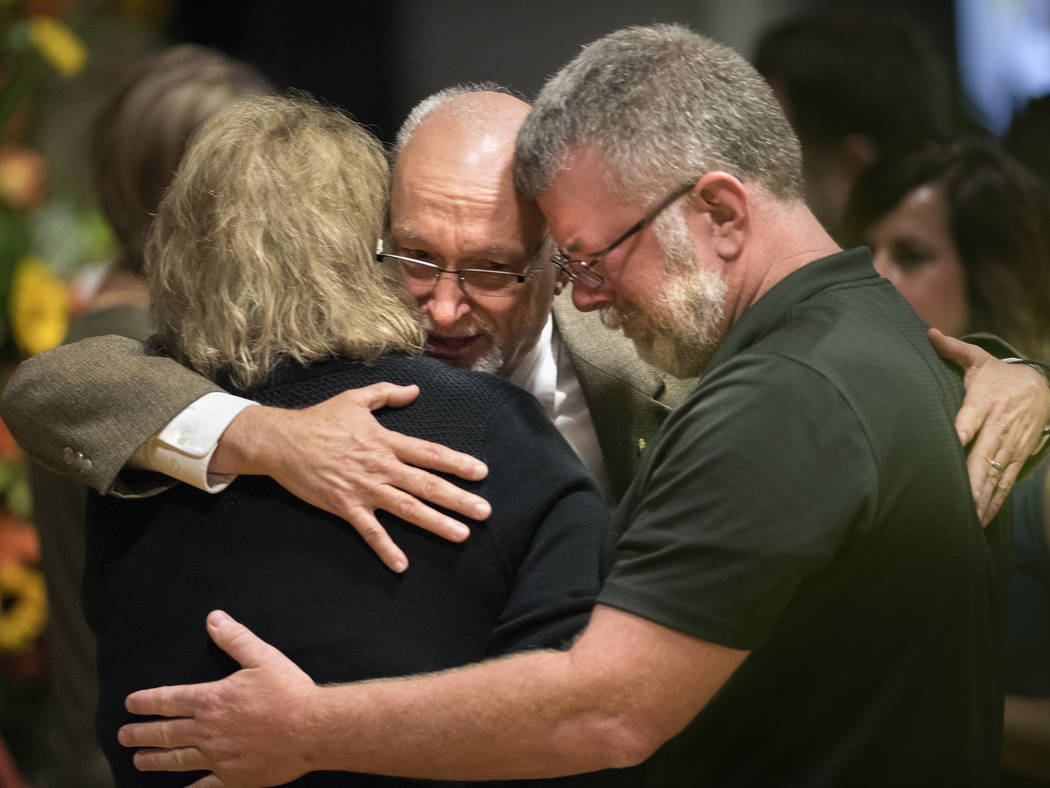 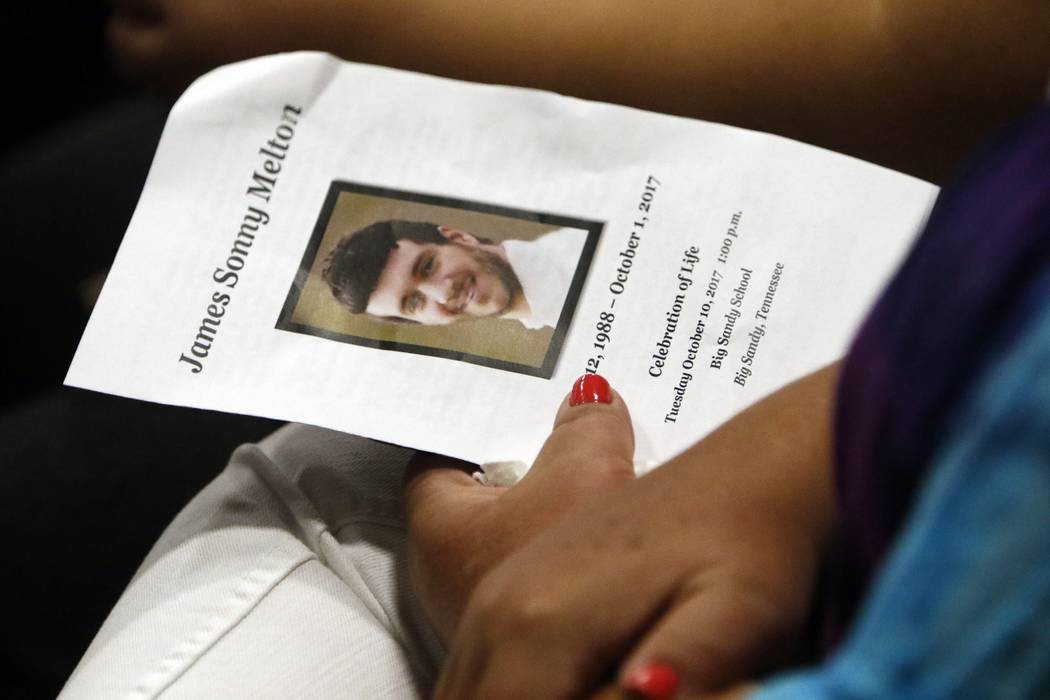 A guest hold a program as she waits for the funeral to start for Sonny Melton Tuesday, Oct. 10, 2017, in Big Sandy, Tenn. Melton, of Paris, Tenn., was one of the victims who died in the Oct. 1 mass shooting in Las Vegas. (Wade Payne/AP) 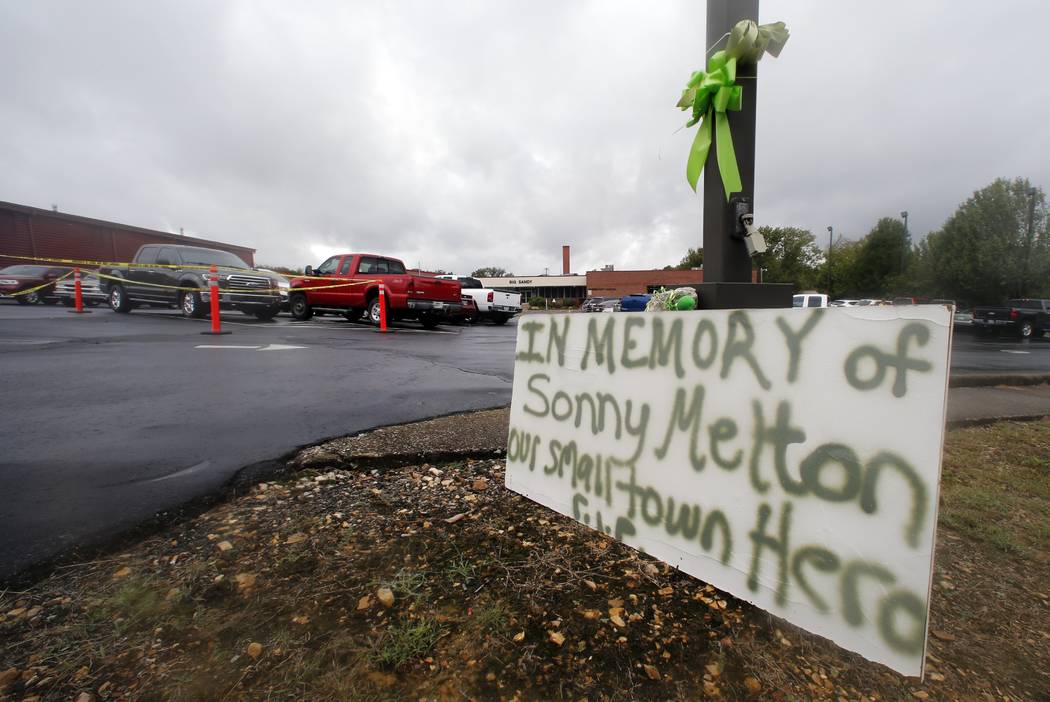 A sign is seen outside the school before the funeral for Sonny Melton Tuesday, Oct. 10, 2017, in Big Sandy, Tenn. Melton, of Paris, Tenn., was one of the victims who died in the Oct. 1 mass shooting in Las Vegas. (Wade Payne/AP) 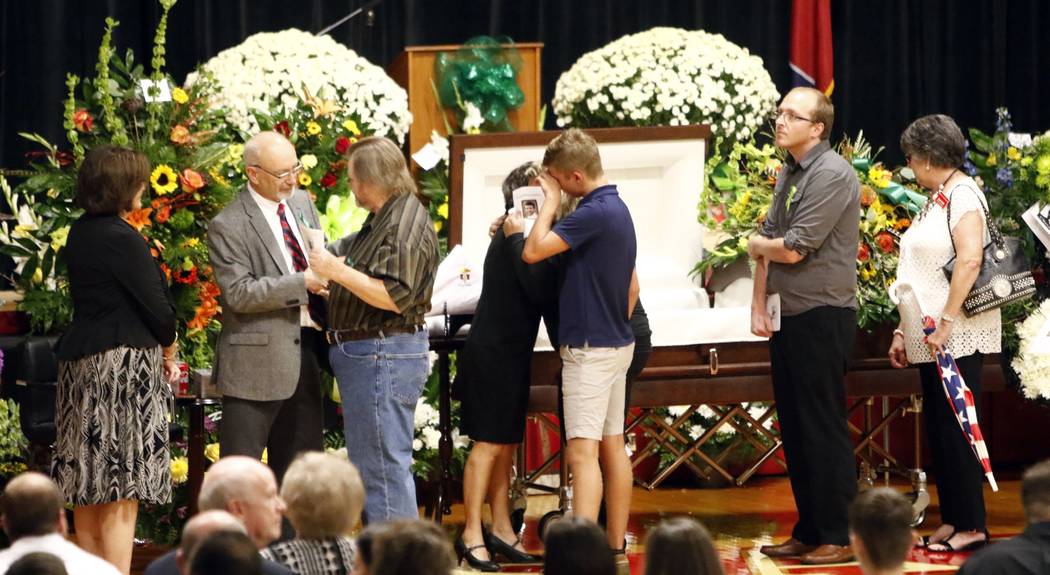 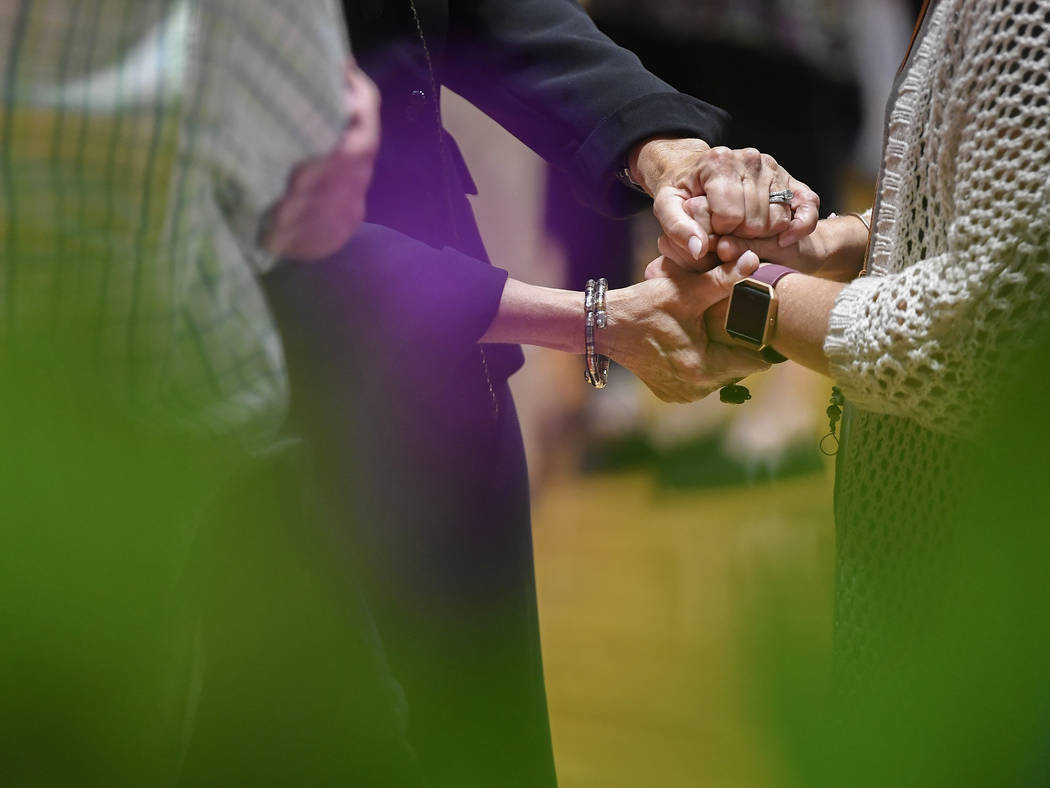 Friends and family of Sonny Melton console each other Monday, Oct. 9, 2017, during Sonny's visitation at Big Sandy High School in Big Sandy, Tenn. Sonny was killed during a mass shooting at a country music festival in Las Vegas. (Morgan Timms/The Jackson Sun via AP) 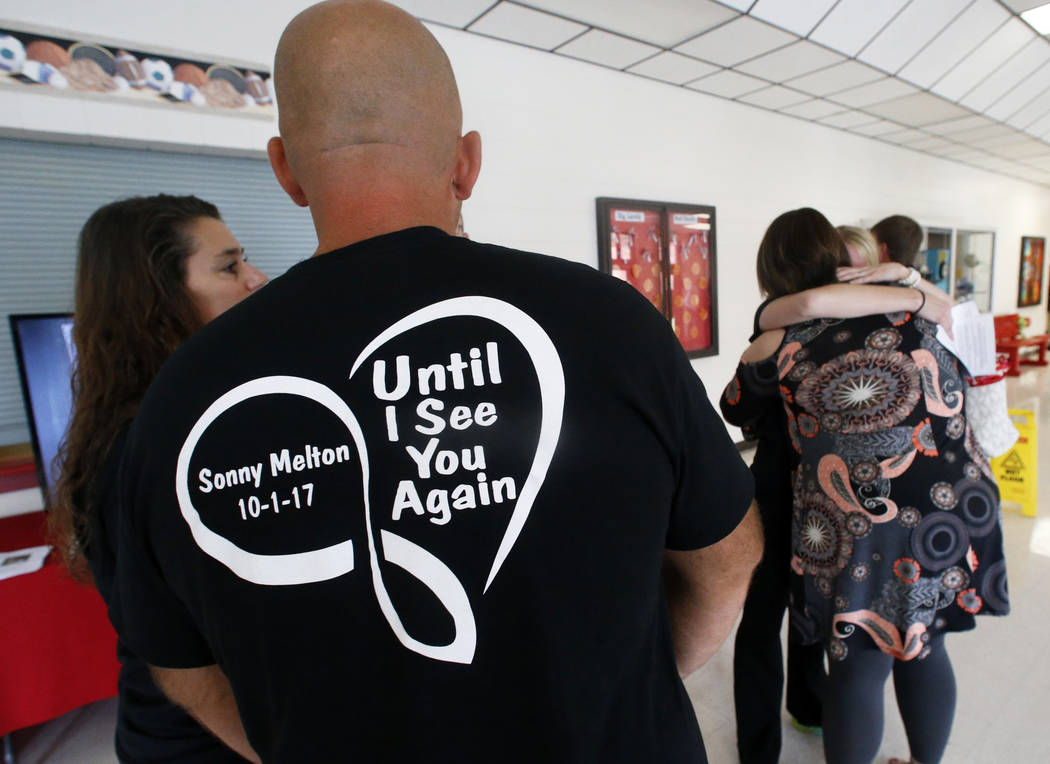 A guest is seen wearing a shirt in honor of Sonny Melton before the funeral Tuesday, Oct. 10, 2017, in Big Sandy, Tenn. Melton, of Paris, Tenn., was one of the victims who died in the Oct. 1 mass shooting in Las Vegas. (Wade Payne/AP) 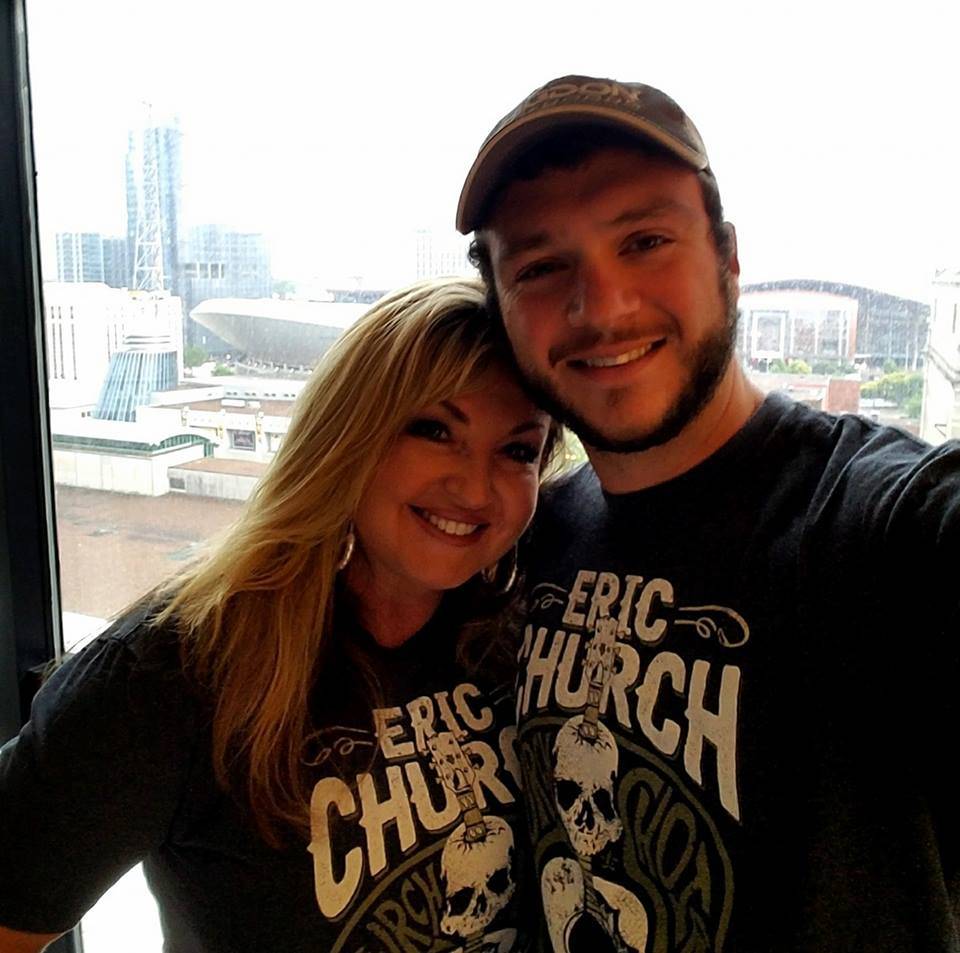 Heather and Sonny Melton of Big Sandy, Tenn. met at nearby Henry County Medical Center, where they both worked. Married for about a year and a half, they frequently traveled to Las Vegas and had taken off work to attend the Route 91 Harvest Festival. Facebook.

Heather and James “Sonny” Melton met a few years ago at the Henry County Medical Center in Paris, Tennessee, where she worked as an orthopedic surgeon and he as a registered nurse.

They married about a year and a half ago and took frequent trips to Las Vegas, medical center CEO Tom Gee said in a phone interview Oct. 2.

Sonny Melton, 29, was killed in the hail of gunfire that rained down on the Route 91 Harvest Festival in Las Vegas on Oct. 1. Heather Melton survived.

“He saved my life,” she told the Nashville Tennessean. “He grabbed me from behind and started running when I felt him get shot in the back.”

Melton’s funeral was Tuesday in his hometown of Big Sandy, Tennessee. His wife Melton spoke at the funeral to introduce country singer Daniel Bonte, who carried Sonny Melton to a truck, performed CPR on him on the way to the hospital and stayed with her after he was pronounced dead.

At the funeral, Kris Gulish said his brother-in-law was a hero. He called him a country boy from small town, U.S.A., who touched the entire nation simply by being himself.

“In that very dark night, I was screaming for somebody to come and help me, and then an angel came and put Sonny over his shoulder and carried him off the field,” she said.

“There was more than one hero that night,” she added.

Bonte then sang the song “Like a Cowboy” in Sonny Melton’s memory.

The couple took time off from work specifically to attend the three-day country music concert — they frequently attended concerts of all kinds — and had been posting pictures all weekend of their trip, Gee said.

“He was an excellent person. Everyone liked him. He was a very caring individual,” Gee said.